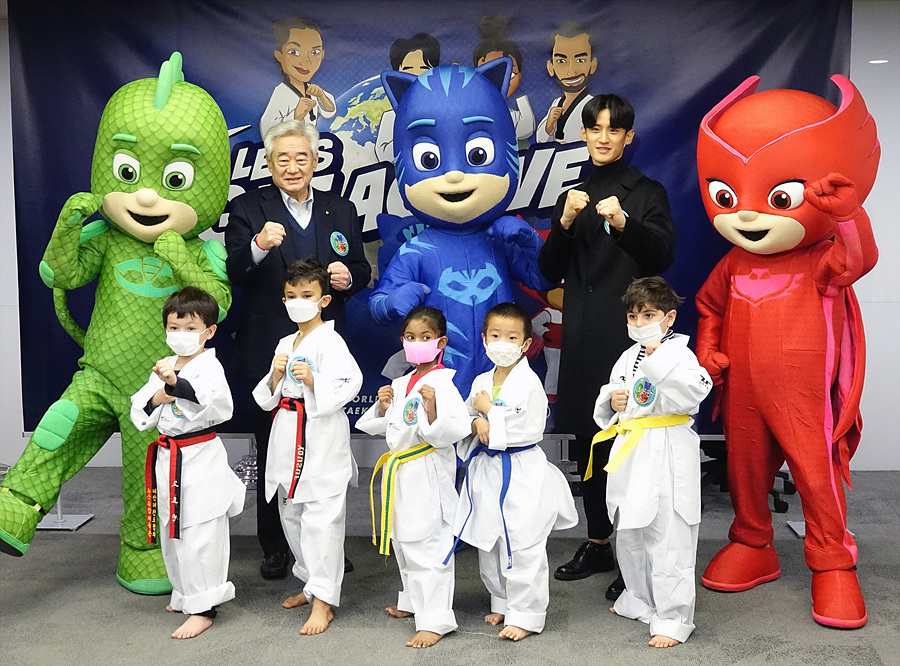 SEOUL, Korea (November 27, 2020) - World Taekwondo and Hasbro today announced a new partnership designed to engage children around the world in taekwondo through an exciting collaborative campaign.

The partnership will bring together Catboy, Gekko and Owlette, the heroes of the eOne children’s television series, PJ Masks, and 12 of World Taekwondo’s top athletes. These World Taekwondo ‘Heroes’ exhibit the same values of empowerment and teamwork as the PJ Masks and together they will help children and families to “GET ACTIVE WITH PJ MASKS!”

Launching on 1 December 2020, the campaign aims to combine the global appeal of the animated series with the fun and accessibility of taekwondo to encourage children to take part in the sport. A unique tutorial series & interactive website have been created to help young fans of World Taekwondo and PJ Masks get active, have fun and master their own taekwondo inspired superpowers. Taekwondo heroes from 12 countries have created 12 Let’s Get Active taekwondo movements so that children can try and recreate them at home. 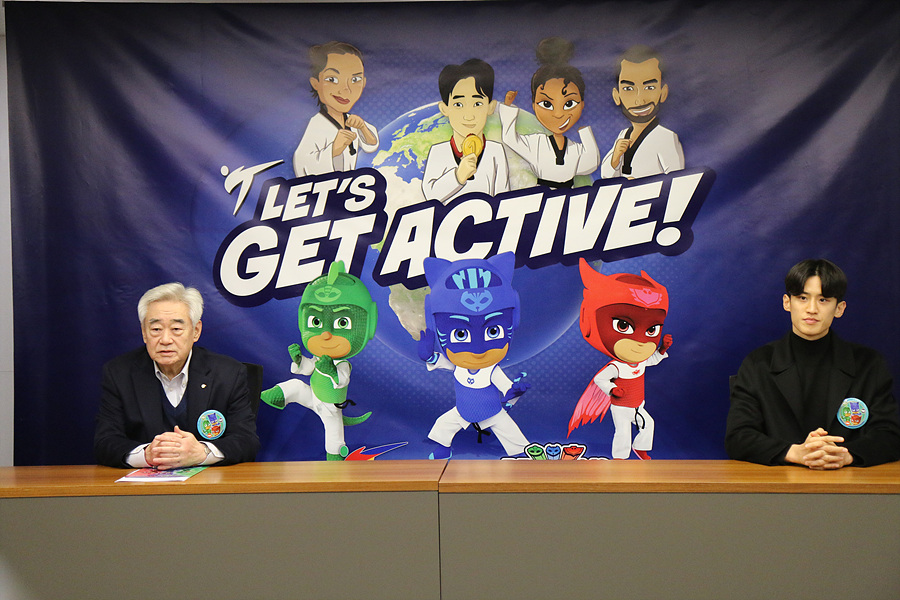 At the partnership launch, World Taekwondo President Dr. Chungwon Choue commented, “We are delighted to partner with Hasbro and eOne to bring together our shared values and the skills of our world and Olympic stars. World Taekwondo is committed to connecting with young people around the world and getting them to practice taekwondo and live healthy lifestyles. Partnering with the most loved and internationally recognised children’s shows in the world, is an excellent opportunity to demonstrate how fun and rewarding taekwondo can be. I want to thank each of these World Taekwondo Heroes for bringing smiles to the faces of children and families everywhere”.

“There couldn’t be a better time to get kids active and excited about sport and movement,” said eOne’s Rebecca Harvey, EVP Global Marketing, Family & Brands. “Action, heroism and integrity are central to the PJ Masks brand and these values are perfectly aligned with the World Taekwondo Federation’s mission to teach Taekwondo to kids around the world and channel their youthful energy into skills that will build strength and resilience.”

During the launch event, Dae-hoon Lee, one of the 12 taekwondo heroes and three-time World Champion, visited the World Taekwondo headquarters. Five children also visited the headquarters and watched the video series before trying the taekwondo moves for themselves.

The animated series is open to all. Anyone wishing to join the fun, simply has to click the link, follow the warm up with an adult’s supervision and enjoy the WT and PJ Masks videos. They can train along safely indoors or outdoors. The sticker book will be launched by WT at 12 chosen Taekwondo gyms in 12 different countries when it is safe to gather. 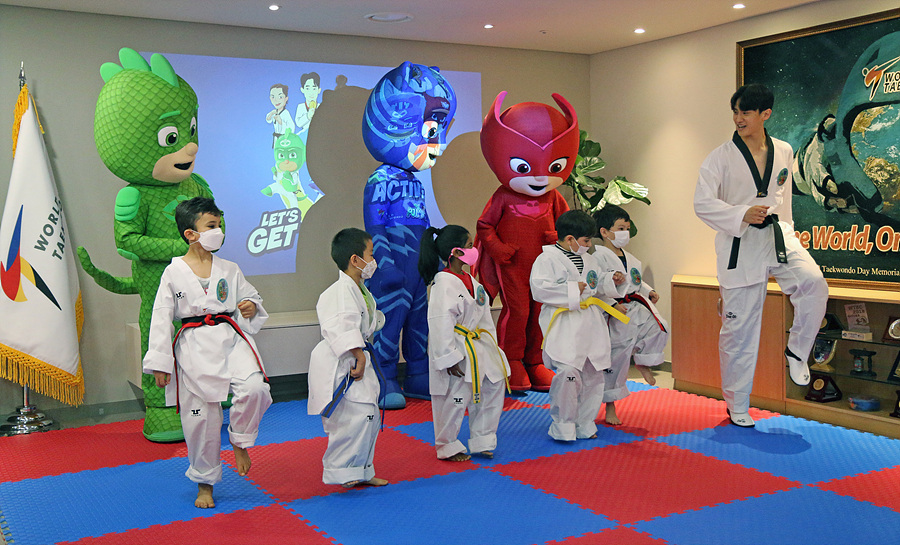 PJ Masks is broadcast in more than 150 territories around the world and is one of the world’s most popular properties with children aged 3-8 years old. The PJ Masks app has had 61 million downloads, and there have been over 22 million streams of PJ Masks music on Spotify. In the UK, Spain, France and Italy, 4 of the 12 markets targeted in the WT and PJ Masks partnership, PJ Masks was rated within the top three most valuable properties for pre-school children.

PJ Masks info –By day, 6 year olds Connor, Amaya and Greg go to school like everyone else. As night falls and they put on their pyjamas and activate their animal amulets, they magically transform into superheroes - Catboy, Owlette and Gekko and become the PJ Masks!  Together they embark on action packed adventures, solving mysteries and mayhem across the city.
Watch out night-time baddies – the PJ Masks are on their way, into the night to save the day!

Produced by Hasbro’s global entertainment studio eOne and FrogBox, in collaboration with French animation studio TeamTo, along with Disney Junior and France 5, PJ Masks became a global hit with pre-schoolers upon its launch in 2015.

About Hasbro: Hasbro (NASDAQ: HAS) is a global play and entertainment company committed to Creating the World’s Best Play and Entertainment Experiences. From toys, games and consumer products to television, movies, digital gaming, live action, music and virtual reality experiences, Hasbro connects to global audiences by bringing to life great innovations, stories and brands across established and inventive platforms. Hasbro’s iconic brands include NERF, MAGIC: THE GATHERING, MY LITTLE PONY, TRANSFORMERS, PLAY-DOH, MONOPOLY, BABY ALIVE, POWER RANGERS, PEPPA PIG and PJ MASKS, as well as premier partner brands. Through its global entertainment studio, eOne, Hasbro is building its brands globally through great storytelling and content on all screens. Hasbro is committed to making the world a better place for all children and all families through corporate social responsibility and philanthropy. Hasbro ranked among the 2020 100 Best Corporate Citizens by 3BL Media, has been named one of the World’s Most Ethical Companies® by Ethisphere Institute for the past nine years, and one of America’s Most JUST Companies by Forbes and JUST Capital for the past four years. We routinely share important business and brand updates on our Investor Relations website, Newsroom and social channels (@Hasbro on Twitter and Instagram, and @HasbroOfficial on Facebook)