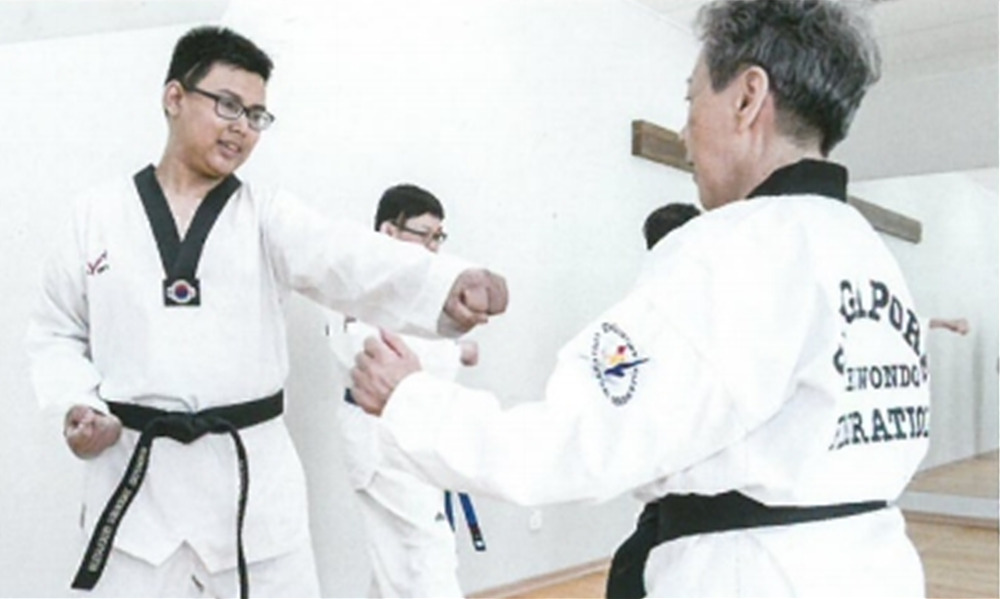 Cancer is the bane of the aged population in the developed world: A grim reaper that strikes with little warning and no mercy, and for which the treatment can sometimes be as harsh as the disease.

Less well known, but perhaps even more devastating, is when cancer strikes the young – or the very young.

That was the case for Singaporeans Ivan Wong and Wei Liang Ng. Wong was diagnosed with leukemia at age two; Ng suffered a brain tumor at the age of one. The two, now in their teens, survived their early treatments, but know they can never be completely free from the shadow of the disease.

They are both now regular attendees at the island state’s KK Children’s Hospital and its Assisi Hospice Day Care Centre – where they, together with three other child-cancer victims, are regular attendees at taekwondo classes, sponsored by the president and the Management Committee of the Singapore Taekwondo Federation.

Their coach is Sister Linda Sim, a black belt since the early 1970s. “They were very enthusiastic choosing [taekwondo] over board and video games and TV shows,” she said. “To see these kids grow over the years, while still relentlessly pursuing the sport as a lifelong commitment has truly humbled me and opened my eyes to their passion for life and dedication to training.”

Despite the sport’s rough- and-tumble nature – a nature that many might consider too risky for patients undergoing treatment – the group have embraced it. But it is not easy.

“It is hard for me to coordinate my arms and legs, an act critical in taekwondo,” said Ng. “But to succeed all we need to do is practice, and not look at others and compare who is better.  You just have to focus on yourself and do your very best. That is enough to take you off the tipping point and triumph.”

“Taking up taekwondo when you are sick is a test of mental strength,” added Kenneth, a 15-year-old in the program. “The chemotherapy and medication cause my body to be stiffer than usual and I get cramps easily. I need to practice much longer than others in order to achieve the same level of proficiency.”

The ability to keep going with a task, even through hardship  is defined as “perseverance” - which is, of  course, one of the tenets of taekwondo. So too is “indomitable spirit” – a spirt that these teens embody.

And they have thrived in the sport. Wong won a gold medal at a tourney in June 2016, and three members of the program were selected to represent Singapore at the ASEAN-Korea Youth Cultural Exchange Program. During that program, their coach insisted each of them take turns being group leader for a day.

“In this way, each one had an opportunity to exercise leadership and take responsibility for our group,” Sim said. That role meant that they had to ensure “effective communication, punctuality, accountability, caring for one another and self-confidence,” Sim explained.

The group are sealed by strong bonds, tightened by both their medical experiences and their taekwondo training.

“While they learnt the values of strength and friendship, forging them through lessons gained form hardships, they too, needed to pick up the nuances of life to live normally,” said Sim.

And taekwondo is not just about the art: it is also about the coach, a figure who must be, by turns instructive, kind and stern. “Sister Linda would always correct us – and discipline us,” said Venus, who, at 14, is the youngest member of the group.

And the benefits have not been one way.

“It is such a joy and a privilege to journey with these extraordinary young people in their battle and victory over life-threatening illnesses,” Sim said. “May they continue to stay well – and live well.”