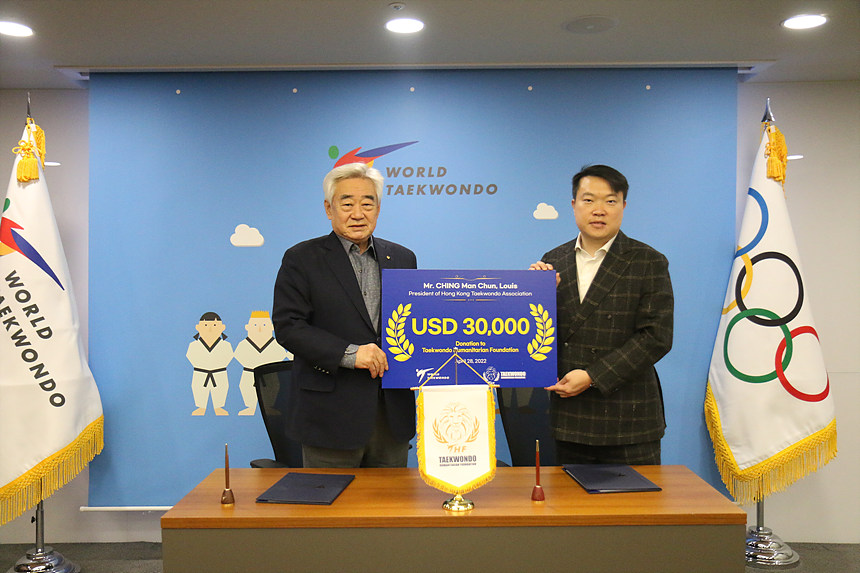 SEOUL, Korea (April 29, 2022) – President of the Hong Kong Taekwondo Association, Louis Ching, today made a personal donation of USD 30,000 to the Taekwondo Humanitarian Foundation, to be used for the benefit of refugees.

In a visit to the headquarters of World Taekwondo in central Seoul, Ching met WT President and THF Chairman Chungwon Choue, who received the donation.

“I am grateful and delighted at this generous gift,” Choue said. “Louis is a fine example of the deep humanity of the World Taekwondo family.”

Offering his “deep thanks,” President Choue assured Ching that his donation “will be deployed judiciously” to fund THF project development.

At a time when wars and disasters are sending the numbers of refugees and displaced persons to record highs, the THF is running six programs worldwide in Jordan, Turkey, Rwanda, Eswatini, France and Switzerland. A new project will be launched in Lebanon in the coming months.

The THF’s programs contribute to the Sustainable Development Goals and “empower the powerless” by providing Taekwondo training that promotes personal fitness, self-defense and self-belief to refugees.

Taekwondo can be economically deployed, as it needs nothing other than the human body and no special equipment or facility. As such, it can be practiced by anyone, anywhere, at any time.

Over 2,000 refugees are trained every week, and so far, eight refugees/displaced persons have hired by the THF in coaching and project coordination roles. Moreover, refugee teams and individuals frequently compete at WT tournaments worldwide.