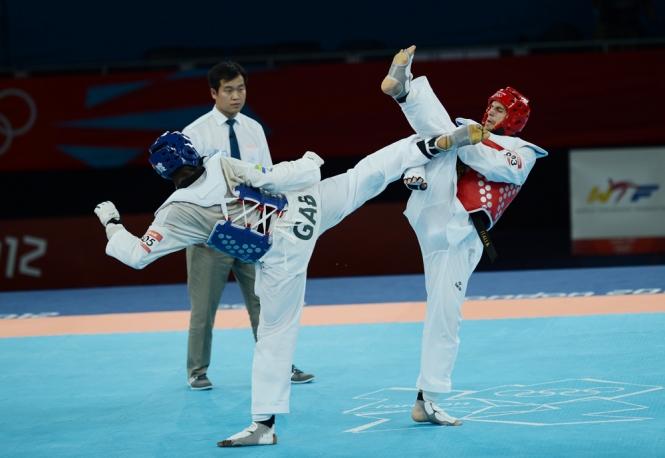 If there is one story that of the London 2012 Olympic Games that embodies the spirit, values, and ideals of Olympism, it is the final medal matches of the tekwondo competition.

Italian Carlo Molfetta won the men's +80kg in one of the most dramatic and exciting matches of the London Games, and perhaps taekwondo's Olympic history. But the rest of the story was that Anthony Obame of Gabon accomplished the unthinkable by winning his country the first-ever Olympic medal - a silver medal.

The two medalists embraced and raised each others' hands in true sportsmanship and admiration for one another as their match was left to judges' decision.

Obame maintained a lead throughout the gold-medal match against Italian Carlo Molfetta until late in the third round when Molfetta tied it up 9-9 pushing the match into the "golden point" overtime round. But neither competitor managed to score, and the decision eventually went to the judges and the two athletes endured an intense wait for the final verdict.

This was the second consecutive Olympics that taekwondo was the source of a nation's first Olympic medal. In the 2008 Beijing Olympics, Rohullah Nikpah won Afghanistan's first-ever medal following it up with the country's second medal in London. Both were bronze and both were won after having to fight through repechage matches to get to the medal round.

But there was far more to the night to taekwondo's fourth and final night in the London Games.

London 2012 was Serbia's first appearance in taekwondo at the Olympic Games and it was golden.

Serbia's Milica Mandic won her country's first gold medal in London as she upset world No. 1 Anne-Caroline Graffe of France. The athletes took turns advancing and drawing even throughout the match. But in the end, it was Mandic that took the gold and Graffe with the silver.

To get to the final seventh-seed Serbia's Milica Mandic stunned second-seed and Beijing Olympic gold medalist Maria Espinoza of Mexico to move to the semifinals. She then upset third-seeded Anastasia Baryshnikova of Russia in the semifinal match.

Anastasia Baryshnikova from Russia took a bronze medal away from Korean contender In-Jong Lee by golden point after tying at official time 6-6. The hard fought match put the European gold medal champion in a position to take the bronze.

In Jong Lee had to qualify for the women's +67kg bronze-medal match through repechage after finalist Graffe defeated her in a shocking and thrilling quarterfinal match. Lee was dominant in here preliminary and repechage matches, but couldn't shake her Russian counterpart for the bronze.

Cuba's Robellis Despaigne dominated his repechage match winning by point gap 14:2 at the end of round 2 to face off Mali's giant Daba Modibo Keita for the first of two men's bronze medal matches of the night. However, after an injury during his semifinal match against gold medalist Molfetta, he had to withdraw and Despaigne took the bronze.