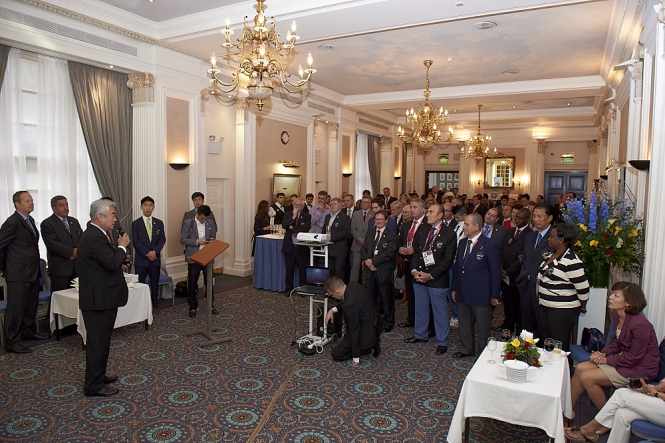 Today the World Taekwondo Federation (WTF) held its official Gala at the Royal Air Force Club to celebrate the start of Olympic taekwondo competition on Wednesday.

Many VIP guests attended, including IOC members, IF Presidents, NOC Presidents and Secretaries General, and other Olympic family members. These guests watched demonstrations by young British and Korean athletes, a "This is Taekwondo" promotional video, and numerous photo presentations.

The young male and female athletes, aged between nine and 13, impressed guests with their synchronised demonstrations that showed the sport's beauty and discipline.

The "This is Taekwondo" video emphasised the sport's ability to spread hope and dreams to youth worldwide. There was also a look back at previous Olympic taekwondo competitions, "Taekwondo on the Roof," and "Taekwondo at the Tower" events in London.

"When this summer's Olympic competition begins, athletes, fans, coaches and viewers can all expect the best taekwondo experience ever. This year's field is so talented that any athlete has the potential to win. With 202 member nations, three member nations awaiting approval, 70 million global practitioners, and a sport that is fairer and more dynamic than ever before, I am confident that this will be the most successful Olympic taekwondo competition yet."

"LOCOG has done an outstanding job with the venue. The ingredients are all there to showcase the sport in its prime. Our job is to make the most of these ingredients during our four days of competition. We have to maximise taekwondo's Olympic impact and create a tangible legacy of youth participation in London and beyond. While young people will love the sport's thrill and intensity, parents will love its safety and inclusivity. Taekwondo is one of the fastest growing sports in London and we cannot wait to build on this momentum."

The London 2012 taekwondo competitions start tomorrow, 8 August, at 9:00 p.m. at the ExCeL Arena. The competition runs until 11 August. 128 athletes from 63 countries will compete to win a total of 32 medals.