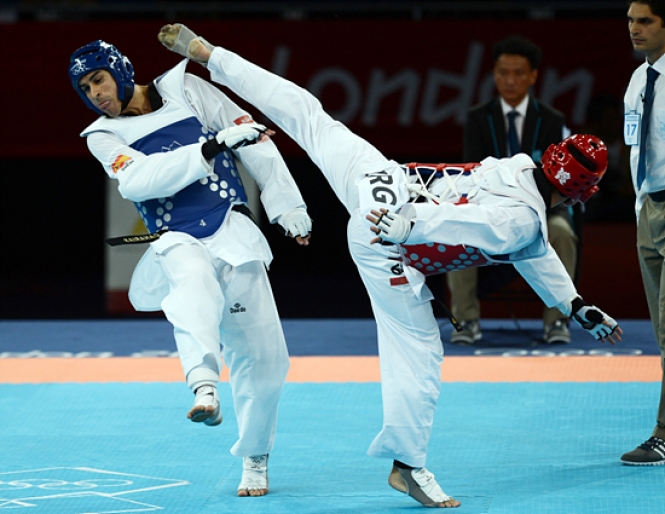 A golden night for Korea and Argentina saw the energy of the first two days of competition at the taekwondo venue of the London 2012 Olympic Games carry over to a third.

Sebastian Crismanich of Argentina captured not only his nation's first gold medal in taekwondo at the Olympics, but the first gold medal at the 2012 London Olympics. He did so in a nail-biting 1-0 victory over Spain's Nicolas Garcia Hemme.

Crismanich easily passed through the preliminary and quarterfinal rounds, but also had to edge through his semifinal match.

Korean Kyung-Seon Hwang, the gold medalist at the 2008 Beijing Olympic Games, doubled her weight in gold by defending her title of Olympic champion in the women's -67kg division.

Hwang came out charging and never let up as she proved worthy of the gold medal defeating silver-medal winner from Turkey, Nur Tatar. She had little trouble making her way to the gold-medal match. She shut-out her opponent in the semifinal match 7-0.

Nur Tatar had no trouble making it to the finals either, but just couldn't keep up with the two-time gold medalist.

Great Britain's fans found something to cheer about again as Lutalo Muhammad claimed a bronze medal after a quarterfinal loss to finalist Nicolas Garcia Hemme of Spain.

The power, speed and tenacity of Great Britain's Lutalo Muhammad, not to mention the energy that the crowd offered him, proved to be too great for Armenian Arman Yeremyan as Lutalo claimed a bronze in the men's -80kg competition. He also pushed passed Athens Olympic bronze medalist Yousef Karami from Iran in the same manner in the repechage.

The first bronze-medal match for the women's -67kg displayed American Paige McPherson's dominate style as she breezed past German Franka Anic to take the title of Olympic medalist. McPherson plowed through her repechage contest to a 15-3 point-gap victory against Grenada's Andrea St Bernard to reach the bronze-medal match with Anic.

Helena Fromm of Germany can now add Olympic bronze medalist to her list of achievements after defeating Australian Carmen Marton. Fromm is the current World Champion bronze medalist and had to work her way through repechage after a quarterfinal defeat by gold medalist Kyung-Seon Hwang.

Italian Mauro Sarmiento is taking home more Olympic hardware as he defeated Afghan Nesar Ahmed Bahawi for the bronze. Sarmiento was the Beijing Olympic silver medalist, but bowed out semifinals after falling to gold medalist Crismanich.