MUJU, Korea (June 26, 2017) - The gold medals on the fourth day of the 2017 World Taekwondo Championships were won by Turkey and Korea as two of the most early awaited weight categories, the Female -67kg and Male -68kg weight categories were contested.

Silvers in the two divisions were won by USA and Chinese Taipei, while bronzes were went to Korea and China, and to Bulgaria and Jordan.

In the first semi-final, the veteran, four-time European champion and 2015 World Championships silver medalist Nur Tatar of Turkey went in against Jan-di Kim of Korea. There was a high work rate from the start, with both girls probing the high and low lines. Tatar opened the scoring - then in a clash the board rose to 4-1. The referee allowed plenty of open play; the match flowed and the round ended 4-1 to the Turk. In Round 2, action started from the buzzer. Tatar looked particularly dangerous with her cut kick to the trunk, but it was a punch that extended her lead to 5-1. Then, in rapid-fire fashion, Kim returned fire and bought the score up to 5-4. In the third, Kim dominated the center of the ring, trying to force Tatar over the line, but was penalized for holding, and the score climbed to 6-4. Tatar took advantage of Kim’s forward pressure to bury her knuckles in Kim’s trunk protector, going 7-4 up. But Kim stayed game for a last-minute effort: She started connecting and the board rose to 8-8, then 9-9. The Korean crowd roared and screamed as the bout went to golden point. Both came out fighting, but it was Tatar who landed, putting her through to the final. 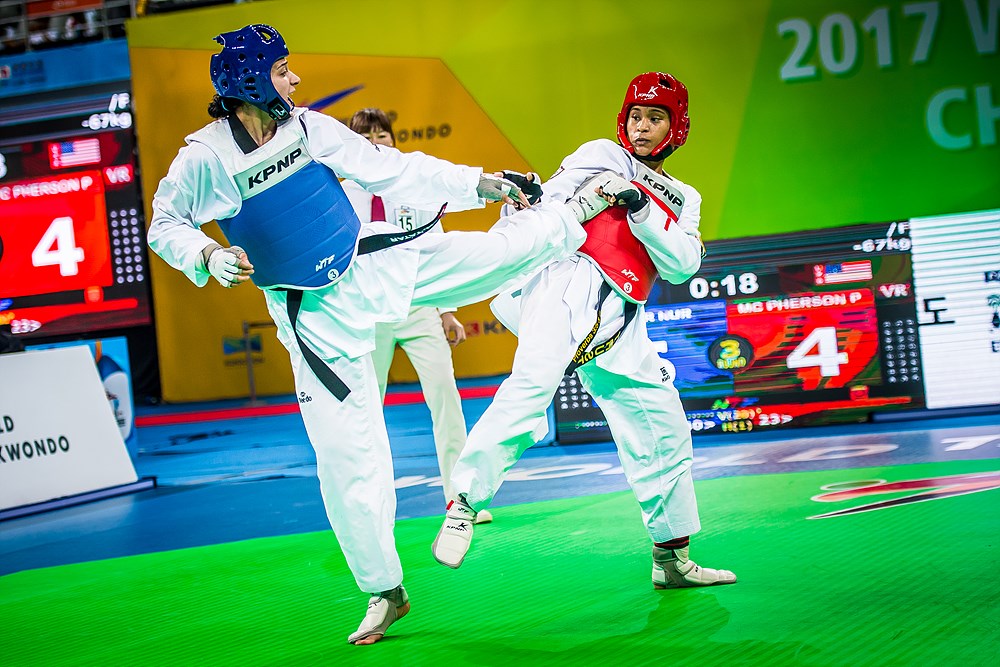 In the second semi-final, Paige “McFierce” McPherson of USA took on Mengyu Zhang of China. Right away, the American went in hard, but seemed almost to bounce off the taller Chinese player, and nearly visited the mats. Zhang scored first, with a big, arcing round kick that scythed down onto McPherson’s headguard, putting the Chinese player 3-0 up. In the second, the American attacked with a vicious cut kick but almost ate a head counter fired in response. Both players were fighting a linear battle, stabbing front-leg kicks at each other and neither giving ground, but the round ended 3-0. In the third, both girls went at it, kicking with real venom McPherson landing to the body and going to 2-3. The action slowed until the last 45 seconds and the US crowd started chanting.  The American raised her score to four then to six in a short flurry of techniques that was too fast to call. Suddenly, the match had turned around. With seconds left, the Chinese athlete turned up the heat but too late; McPherson went through, 6-5.

The final pitted Tatar against McPherson. The first round was lackluster, with both players probing, but neither committing. It ended 0-0. Round 2 continued in the same vein – albeit with the Turkish crowd chanting “Tur-ki-ye!” furiously. Finally, in the match’s first flurry, the American girl visited the mats, putting the Turk one point up. Then, in a brief but very fast exchange, the American scored to the body, 2-1. The rounded ended on that score. Round 3 saw more serious combat, and McPhersons was in trouble, being 6-2 down. She started unleashing head kicks and chasing the Turk, raising her score to 4-6. But with only 10 seconds left, the American launched a barrage of attacks while trying to force the Turkish girl off the mats. Tatar showcased some nifty footwork to stay out of trouble and in the area. It ended with Tatar winning her first world title, 6-4. She was promptly called by Turkish President Recep Ergodan with a message of congratulations – testament to the popularity of taekwondo in the nation.

Silver went to McPherson while Kim and Zhang had to be satisfied with the bronzes. The local crowd roared as Lee walked on: He is the most popular taekwondo player in the Korean game and has won world championship titles twice, in 2011 and 2013

The fighting started up close, with both lads showing a broad range of techniques. The Bulgarian scored first but not for long; Lee landed a body kick to go 2-1 up. He fell: the board went to 2-2. In a nice clinch move, Lee pushed and landed a body kick to go 4-2 up, then 6-2 up. The crowd applauded a spectacular jump spin kick from the Bulgarian that narrowly missed Lee’s head. The first ended 6-2 to Lee. In the second, a lightning-like cut kick from Lee raised his points to 8-2. In an exchange of head shots, both athletes missed but the local crowd gasped at Dalakliev’s dangerous dexterity. An ax kick pulled down to a round kick – skillful play from Lee – raised the board to 10-2. Then, as the Bulgarian assaulted with an ax kick, Lee landed a perfectly timed cut kick to the body. Round 2 ended 13-3 to Lee. In the third, Lee fired a series of twist kicks and his score climbed to 16-5. The Bulgarian landed a head kick; it was disallowed for holding, and a coach appeal failed. The board stood at 17-5 to Lee. A sizzling serial attack by the Bulgarian - including head and spin kicks - failed to land. Lee countered coolly. The match ended 23-6 after a highly professional performance by Lee and an entertaining effort from Dalakliev.

The second semi-final encounter featured Yujen Huang of Chinese Taipei fighting Ahmad “The Desert Wolf” Abughaush of Jordan. The Jordanian, following his spectacular victories at the Rio Olympics, is probably the most anticipated fighter in the game. The fight started with Huang attacking and “The Wolf” back-pedaling, conserving energy and dancing round the perimeter. Round 1 ended 0-0. In the second, Huang scored with an arcing ax kick to the head from the clinch. Abughaush had to come to life. A spinning back kick to Huang’s face missed by a whisker, then a body kick bought the Jordanian’s score to two versus Huang’s three. So, there was everything to play for in the third. Abughaush attacked forward with a punch-cut kick combination, then a jumping ax kick that bought gasps from the crowd. But Huang extended his leg in a side kick and extended his lead. In the clinch Abughansh almost scored with an arc kick to the head – again, it missed by millimeters. As the seconds counted down, Abughaush leapt into an aerial attack, but too late. The match ended 9-4 to Huang.

The title match saw Lee do battle with Huang. Lee was greeted in the arena with thunder from the crowd and banners emblazoned with his name. The fight started with probing front-leg kicks, before Lee landed a punch-body kick combination, going three points up. Very nice work. Lee scored yet again from in close, then again, going 7-0 up. Lee forced Huang back and then landed another punch, before Huang was penalized. The rounded ended 9-0 to Lee. Some messy exchanges marked the start of the second before Lee, in rapid succession, sneaked two kicks to the trunk to go 13–0 up. Finally, Huang scored a kick to the body from the clinch - but Lee shot back with a round kick to the head. After an edge of mats flurry and an inconclusive IVR request from the Chinese Taipei coach, the rounded ended 17-4 to the hometown favorite.

In the third, a kick to the trunk PSS put Lee 19-4 ahead, with the Korean keeping the Chinese Taipei lad on the back foot and on the edge of the mats. Huang surprised Lee with another body shot, raising his points to six. Then a really nice, close-in round kick to the head put Lee 23 points up - then 26. Huang shot back with another body shot, but the uneven match ended 26-8. Huang had been outclassed, while Lee’s push game and bullseye kick placement suggest he is at his career peak. 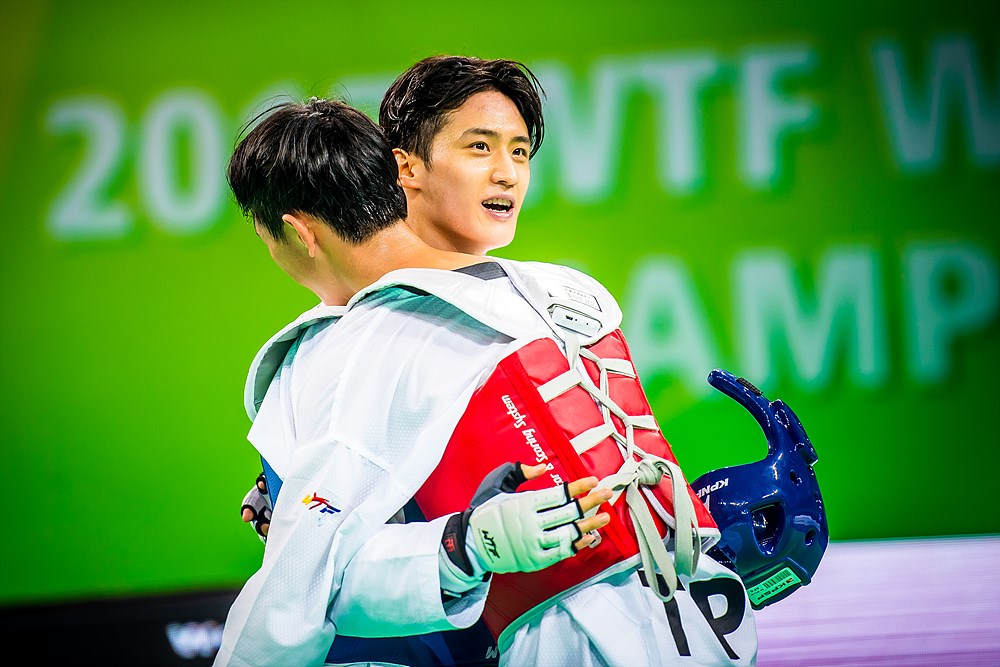 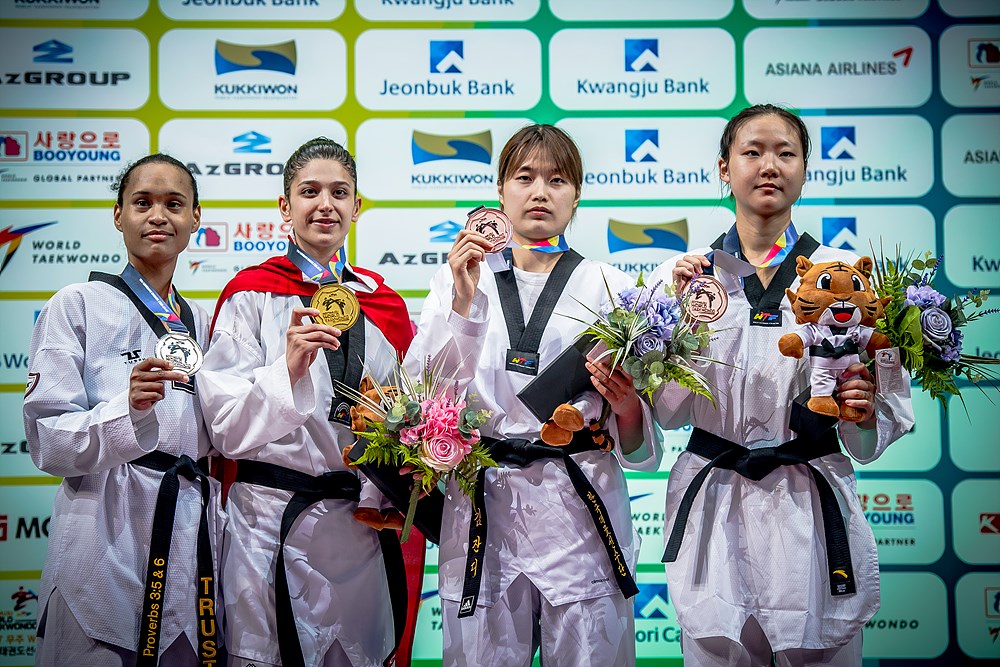 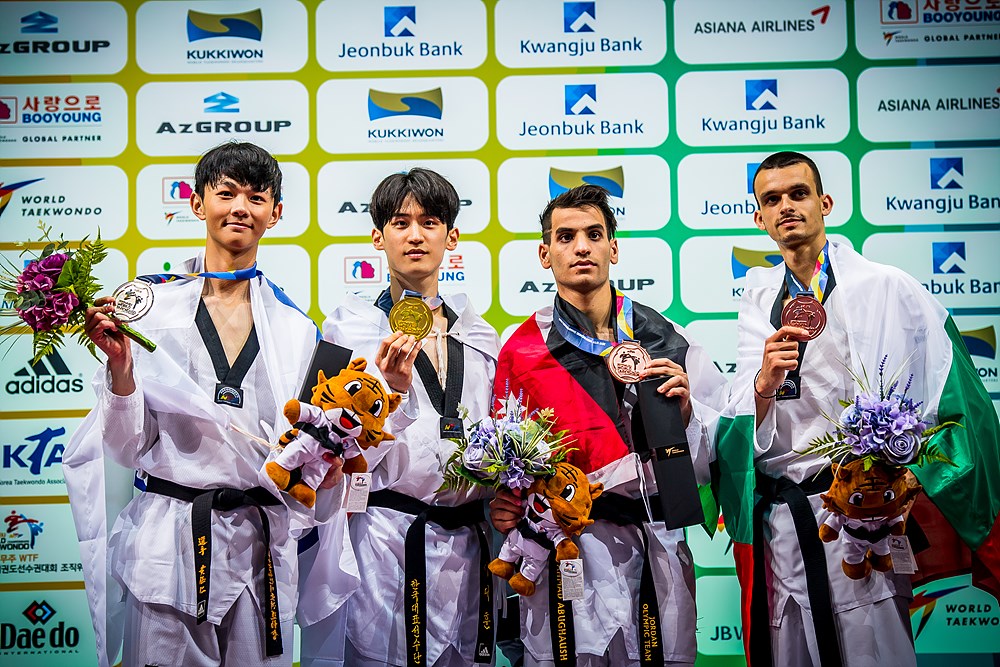