MUJU, Korea, (June 23, 2017) – One day ahead of the opening of the 2017 World Taekwondo Championships, the World Taekwondo General Assembly convened in Muju, Korea, to review the last four years’ progress and to prepare for this afternoon’s quadrennial leadership elections.

Among other business, the Assembly approved two new championship formats - Beach Taekwondo and a super-elite Grand Slam series - as well as changes to poomsae competition rules. It also adopted a “Muju Declaration.”

One hundred fifty-eight delegates from 102 countries took part in the Assembly at the Muju National Sports Center. The Assembly opened with World Taekwondo global partner Booyoung Corporation being honored. Booyoung then handed out training scholarships to Djibouti, Bhutan, San Marino, the Marshall Islands and Haiti.

A moment of silence was observed to pay respect to the recently deceased Uhm Woon-kyu, one of taekwondo’s sportive pioneers. World Taekwondo President Chungwon Choue noted that the upcoming World Championships, with 183 nations participating, as well as a one-person refugee team, will be the largest in history. He also noted that the IOC president and vice president would be visiting the championship.

Choue welcomed 37 new MNA presidents who have been elected (or re-elected) since the last Assembly was held in Burnaby, Canada, in November 2016. They were identified and applauded. He then detailed the key achievements made by the federation since Burnaby.

These include the World Taekwondo being named “Federation of the Year” by Peace and Sport last November; the success of the World Grand-Prix Final and Team Championships in December; the rule change process carried out, post-Rio, to ensure that taekwondo “dazzles and excites;” the invitation to the World Taekwondo to present to the UN Headquarters in New York in March; the inauguration of Beach Taekwondo competition in Rhodes, Greece, in May; and a visit by the World Taekwondo president to the Vatican to meet the Pope in May.

With quadrennial World Taekwondo elections taking place later on the 23rd, Choue reviewed the federation’s key achievements of the last four years. These included: The excellence of the taekwondo competition in Rio 2016; the upgrading of taekwondo’s overall sports presentation with sound, light and music; the creation of the elite Grand-Prix Series; the great success of the 2015 World Championships in Chelyabinsk, Russia; the inclusion of para-taekwondo on the Paralympic program in Tokyo 2020; and the creation of the Taekwondo Humanitarian Foundation to “empower the powerless.”

The minutes of the last Assembly in Burnaby were approved. French Guiana was approved as a new member, bringing the World Taekwondo’s total MNA’s to 208 +1 (the latter signifies refugees). Following that the auditor’s report and financial report were approved.

Then, operation report was presented. World Taekwondo Director General Jin-bang Yang then presented the operation report. He noted the increase in WTF top-level competitions over four years, with a rising number of G1 and G2 tournaments, which have increased opportunities for top-level athletes to compete against each other, while the advent of the elite Grand-Prix series has raised the game’s media exposure. In addition, changes have been made to the PSS and IVR systems, which have made taekwondo both fair and transparent.

However, Yang said that the World Taekwondo still needs to focus more on TV, new media and general audiences. To meet these challenges, he suggested a number of initiatives. The major one is the Grand Slam Champions Series, set to begin in Wuxi, China, in December 2017. This will be a “Champion of Champions” series with USD100,000 prize money per Olympic weight category. The series will also be specifically tailored for TV exposure and for the general audience. Operational upgrades will also be made to the Grand-Prix Series. Yang noted that the aim of the World Taekwondo’s new competition rules, adopted at the start of 2017, is to make taekwondo look more exciting and dynamic, and these rules will hopefully remain in place through to Tokyo 2020. Moves will also be made to ensure that World Taekwondo international referees are as active as possible. The operation report was approved.

Amendment proposals were proposed to World Taekwondo Statutes by World Taekwondo Deputy Director Corbin Min. The first amendment regarded the selection of vice presidents. The second was to extend the due date for the payment of MNAs’ annual fees, from the end of the year to February. The third was an upgrade to MNA reporting requirements to the World Taekwondo - notably to ensure that all information and communications are up-to-date.

Another amendment to the statues was the proposal to add two new championship formats, Beach Taekwondo and the super-elite Grand Slam. A final amendment was made to revise the requirements for World Taekwondo Committees, to streamline them and to focus on their core areas. Six new sub-committees have been added, but the number of 14 committees remains as it was.

All these amendments were passed.

Yang than presented amendments to Poomsae Competition Rules. The main changes are: To consolidate the senior division and to delete basic poomsae, while adding new and more advanced poomsae; a shift in scoring methods; a clearer standard of compulsory technique for freestyle poomsae, and upgraded scoring criteria; the addition of new events to poomsae championships, including breaking; and the addition of new championships – Beach and World Open events. The amendments were approved.

Amendments to Event Operations Rules were presented. One clause has been added, mandating the listing of international-level competitions on the World Taekwondo Calendar, and making clear World Taekwondo obligations, from the appointment of technical delegates to the management of anti-doping control. The amendment was approved.

Amendment proposals to Para Taekwondo Competition Rules were also presented. The amendments were to change points for different kicks, adding an extra point for spinning kicks.  The amendment was approved.

A progress report on the MNA Survey was delivered. While the World Taekwondo received 185 responses, only 155 were complete, and within the 155, some data was inconsistent.  The World Taekwondo wishes to receive complete responses from all 208 MNAs, to better serve members.  The survey found that just over half of all MNAs offer financial aid to athletes, and 64 percent offer incentives for international medal wins. 60 percent of MNAs had an annual budget of less than USD100,000 per year., and 44 percent received money from their governments.

World Taekwondo Secretary Hoss Rafaty delivered a progress report on the World Taekwondo’s rebrand. The rebrand is part of an overall strategic redirection, broken down as: define the strategy; transform the organization; and ensure performance. Key priorities are to add value to the Olympic movement; develop the sport and its member base; and develop the brand. The new World Taekwondo logo will be officially launched at the opening ceremony on June 24.

Choue then stated his intention for the Assembly to adopt a Declaration.

The declaration was read out, as follows:

“We will hold the values of Olympism close to our heart and practice them diligently. We believe and support that ‘Peace is more precious than triumph,’ and therefore will create a just and peaceful world. We will do our utmost to take care of the weak and people in need, especially refugees and orphans, from different parts of the world.” 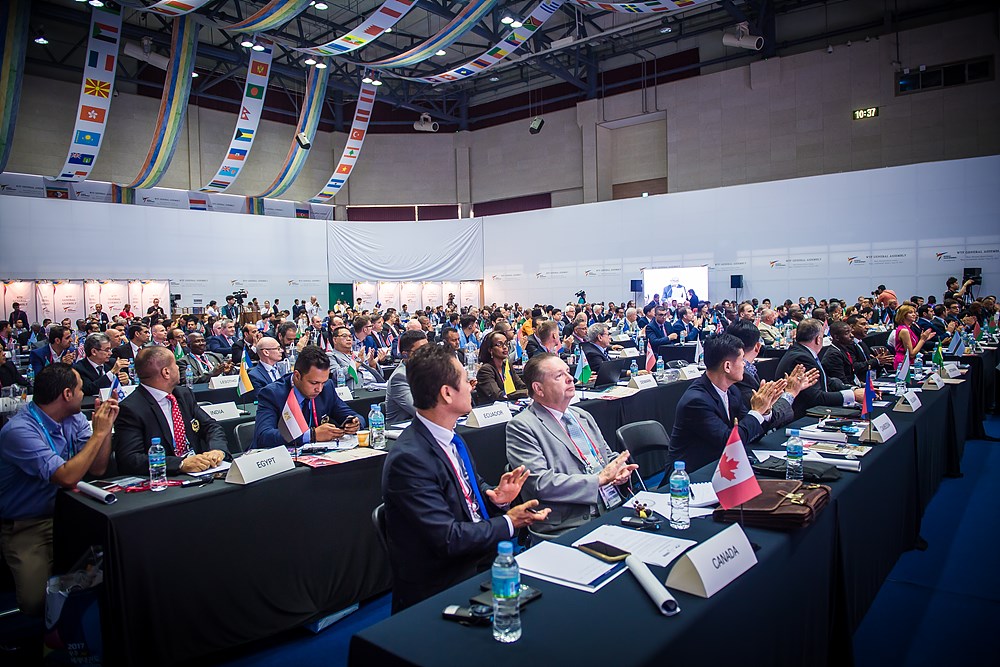