(September 5, 2016) - Serbian heroine Tijana Bogdanovic is looking forward to returning home to Belgrade with her Olympic medal around her neck - but will have only have a limited time to enjoy the celebrations before she is summoned away for her next important engagement.

“Everybody is extremely happy, they cannot wait for me to come,” she said. “But I will have only about 10 days’ summer break - then I start school on September 1.”

Yes, you read that right. The Serbian who captured Olympic silver in a tight, hard-fought bout against Team Korea’s So-hui Kim in Rio de Janeiro is not a pro athlete, working out full-time, day in and day out: She is still a high-school student.

Which explains why she wants to extend her thanks not just to her coaching team, but also to her school buddies. “I had great support from my friends and my teachers, they helped me a lot during my period of absence,” she said. “So I can hardly wait to get to Belgrade and say a big ‘Thanks!’”

“When I was four, my parents took me to a taekwondo club and I fell in love with it at first sight - it is very attractive,” Bogdanovic said. “In taekwondo, you have a lot of adrenalin as [the match] only takes six minutes – you have to withstand the pressure in a short period, you have to show yourself.”

She did exactly that in Carioca Arena 3 on the first day of the four-day taekwondo competition. Fighting her way through the preliminaries, the number-eight seed shocked the punditry by ejecting the athlete who was widely considered the most dominant fighter in the sport: China’s previously unbeatable Jingyu Wu, a double Olympic medalist and the top seed in the women -49kg category.

By the evening, Bogdanovic – whose previous biggest wins had been gold at the European Championships and bronze at the World Championships - had battled her way through to the finals. There, she would face off against Team Korea’s So-hui Kim, the seventh seed.

From the outset, the Serbian teenager, with her height advantage, fought forward, forcing the Korean to dance around the edge of the mats. But it was the more experienced Kim who was more accurate with her legs, winning the first round 2-1. The second continued the same way, with Kim displaying lively footwork to escape the Serbian’s attack. Bogdanovic, trying to land a punch, took a crescent kick to the head; the round ended 5-2.

In the third, the score was 4-6 to the Korean but Bogdanovic applied maximum pressure, and Kim visited the mats repeatedly. In the last 11 seconds, Bogdanovic was virtually chasing her target around the field of play. Kim held off this last-minute charge, taking the match and the gold medal, 7-6 - despite going down in what looked like the final second.

Some observers thought that Kim, who had racked up almost the maximum number of penalties for falling, should have been disqualified for her last-second fall – but not her opponent.

“I feel a bit sorry that everybody is talking about that last second, as I think that all people are allowed to make mistakes - even if you are a judge,” said Bogdanovic.  “It is not something that we should bother about too much.”

Just being at the Olympic Games was an awesome experience for a schoolgirl – though at first she was underwhelmed.

“Since this is my first Olympic Games, I was not really impressed by the Olympic Village and everything, but as time went by, I was really overwhelmed by the atmosphere in the Serbian Team, exchanging good, positive vibes between the athletes on the team,” she said. “I enjoyed all that experience.”

Of course, the highlight was winning the medal.

“It was a great experience in terms of my development because it is not only the day of competition, but all I had gone through before the competition, all the preparation,” she said. “The day of competition is like the top of the cake - when you go to an exam you show what you were working for, so of course, I am happy and proud.”

She rates her strengths as a fighter as flexibility and technical skill: her favored technique is that classic of taekwondo, the round kick to the head. In terms of her athletic personality, she is still a little unsure. “In this period of my life, since I am still 18, I am still developing and would describe myself only as ‘well disciplined,’” she said. “I just listen to my coach and try to be the best student. “

Like many teens, her future plans are unclear. She has no boyfriend, but is “very interested and motivated to work with kids.” She plans to go to university, but has not yet chosen a major.

Naturally, the sport she has been practicing for 14 years will remain central in her life.

“The best place to find me is our taekwondo club as I really feel great when I am in training - I feel myself there, I feel I belong there,” she said. “Also, when I have time, I am always with friends from the club.” 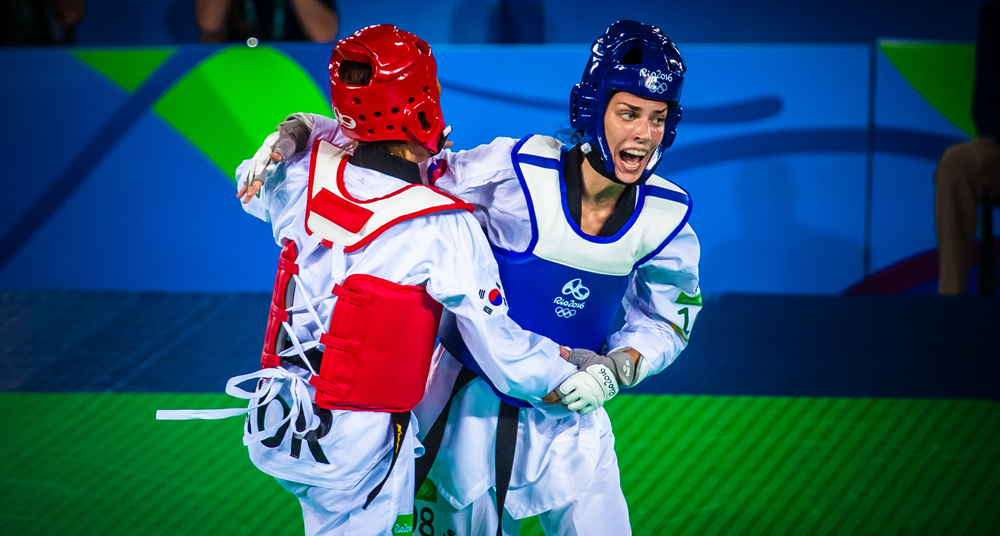