(August 25, 2016) - The Greatest Show on Earth,’ the 2016 Rio Olympic Games, has come to an end. Below, the WTF Communications Team presents a (mostly unofficial and informal) round up of the taekwondo competition’s thrills and spills 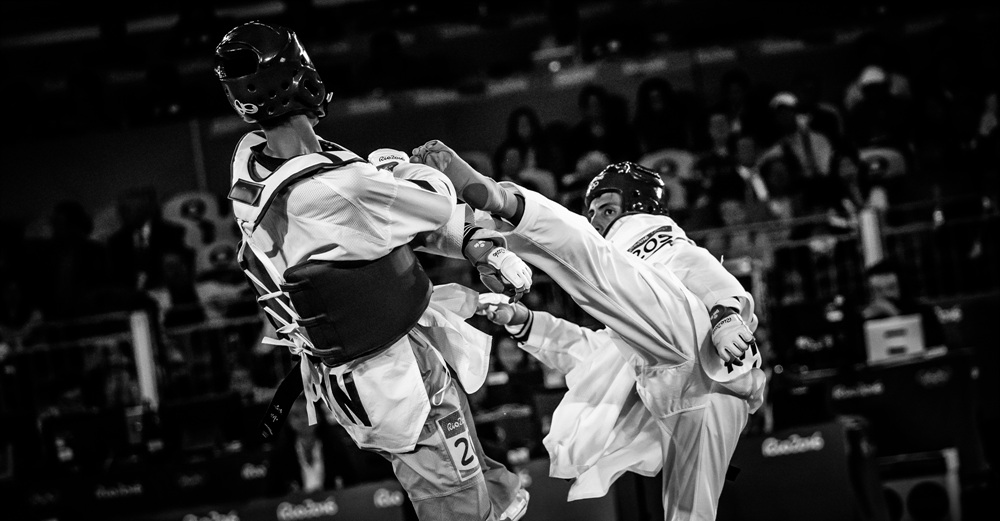 Top Five: The end result of the taekwondo competition:

Best Taekwondo Olympics Ever? With many moments of considerable historical significance for global sport (read on), plenty of startling upsets (read on), reams of positive global media coverage and no scandals or controversies, Rio can lay claim to being the greatest Olympic taekwondo tournament, ever.

Historic Moment #1: The medal won by Jordanian Ahmed  Abughaush in the men’s -68kg – in spectacular, high-flying style - was his country’s first Olympic medal in any Olympic discipline in any Olympics, ever. And the icing on the cake? It was gold! Outside the venue, Jordanians were literally in tears. Jordan’s new national hero told WTF Comms that upon his return home, he would present his medal to his king and country.

Historic Moment #2: The win by Iran’s Kimia Alizadeh Zenoorin of a bronze medal in the women -57kg made her the first Iranian female athlete to win any Olympic medal, of any color, in any sport, ever. “I want to be a role model, I want to open doors,” she told WTF Comms.  Already, downtown Tehran is emblazoned with her image.

Historic Moment #4: Taekwondo was a major boost for African nations at the Rio 2016 Games. Prior to Rio, Africa had only won three Olympic taekwondo medals in total. In Rio, Africans won five. And the silver won by Abdoulrazak Issoufou Alfaga of Niger in the last final of the tourney was only the second medal won by Niger in its Olympic history – the last being in boxing in 1972.

Big Shift #2: Pre-Rio, the pundits had anticipated victories for China and Great Britain in the women’s division and for Iran and South Korea in the men’s division. The pundits were correct for the China (two gold) and Great Britain (one gold, one silver, and one bronze) athletes. They were close to the mark for the South Korea (two gold and three bronzes) athletes, but totally off-base for the Iranian (one bronze) lads. It was a shock for Team Iran, given that two of their players were top-seeded, and the third was seeded two. Expect a renewed charge from the Iranians at the Grand Prix Final in Mexico City this December, and at the World Taekwondo Championships in Muju, South Korea next June.

Biggest Personality: Though he did not win a medal in the men’s +80kg category (he went out in his first fight to Iran’s Sajjad Mardani) Tongan athlete Pita Nikolas Taufatofua became a viral sensation worldwide when he carried in the Tongan flag during the opening ceremony - bare-breasted and oiled up! Women around the world swooned at his buff, shining physique; men around the world bought gym memberships and invested in coconut oil. The Tongan has been inundated with sponsorship offers, and told WTF Comms that this would provide a financial windfall for cash-strapped Oceania taekwondo.

Boy from Nowhere: Jordanian Ahmad Abughaush. The tenth-seed in the men  -68kg was a virtual unknown to the wider taekwondo world, only coming to pundits’ attention during the Asian Continental Qualification Tournament in Manila, Philippines. Now, he has branded his name on taekwondo history in tremendous style.

Most Dramatic Fighter: He may be quiet and soft-spoken in person, but on the mats, Abughaush was a man transformed: He showcased brilliant footwork, and unleashed an arsenal of flamboyant high and aerial kicks – including a wicked jumping round kick to the head delivered while on the retreat. Somebody please add this kick to taekwondo textbooks.

Most Dramatic Kick: Cheick Sallah Junior’s Cisse’s kick to the head of Team GB’s Lutalo Muhammad in the men -80kg final. With the Cote d’Ivorian behind on points against Muhammad as the last round counted down, that kick was the decider – all the more dramatic for being delivered in the match’s very last second. In taekwondo, as in sprinting, tiny increments of time count.

Most Popular Competitor: Cisse again. The Brazilian crowd went crazy over the African hero, who reciprocated after his victory by running round the arena, shaking hands and signing autographs after his last-second triumph.

Biggest Win: Team GB’s Jade Jones’ victory in the women -57kg. Having won her second Olympic gold medal, the Welsh warrior has equaled the feat of China’s Jingyu Wu (women -49kg) and South Korea’s Kyungseon Hwang (women -67kg). She told WTF Comms how delighted she was with her win: It proved that her performance on home turf in London 2012 was no fluke.

Biggest Shock: Where to start? There were so many! Probably the biggest was the first-fight ejection of Iran’s Farzan “The Tsunami” Ashourzadeh Fallah (men -58kg) the number-one seed and clear favorite in the category. Almost as shocking were the failures of two other number one seeds – China’s double Olympic gold medalist Jingyu Wu (women -49kg) and Iran’s Mahdi Khodabakhshi (men -80kg) to make it through to the finals.

Luckiest Competitor: South Korea’s Dong-min Cha of men +80kg. Cha, the Beijing 2008 gold medalist, qualified through Olympic ranking when an Uzbek competitor in his category had to drop out (only one athlete from any nation is able to compete in any one category, and the number-one seed was Dmitriy Shokin from Uzbekistan). In Rio, Cha benefitted from the first round when his first opponent was a no-show. And in his bronze-medal match against Shokin, the Uzbek battleship was fighting with a broken hand. Even so, a great performance from the veteran Korean, whose brand of power taekwondo, vast experience and technical nous provided him with a fitting end to his career: He had said, pre-Rio, that this would be his last competition.

Unluckiest Competitor: Moldova’s Aaron Cook of men -80kg. Despite being one of the most crowd-pleasing fighters in the sport, he has always been unlucky at the Olympics. He failed to medal in Beijing after a judging call which he disputed; was famously dropped by Team GB British selectors before London; and lost his first fight in Rio on point difference. Heart-breaking.

Luckiest National Team: South Korea. The team performed with brilliant consistency, winning two golds in women’s division, and three bronzes in the men’s division. Every Korean who fought in Rio took home a medal. A brilliant performance for the sport’s home country, and a big change from London where Koreans garnered just two medals.

Unluckiest National Team: Belgium. The country punched well above its weight by qualifying three athletes for Rio – including number-one seed in men -68kg Jaouad Achab – to the Games. Despite some great fights – both Achab and Raheleh Asemani (women -57kg) fought through to repechage – Team Belgium left Rio empty handed.

Biggest Relief: Over the 2014 and 2015 fighting seasons, there were fears that the game had degenerated into “foot fencing” using only light, flicky front-leg kicks. There were also fears that athletes would be ultra-cautious in Rio, fighting low-scoring tactical matches. This was the case for some matches – notably the Day 4 finals – but the competition also featured plenty of scorching kicks and high-scoring matches.

Best Technological Development: In Rio, PSS head protectors were used for the first time. While the technology is not yet perfect, there is no question that the PSS, in both head and trunk protectors, has removed much human error and made the game fairer and – for the crowd – more transparent.

Best Quote: “I did what my coach told me to do and I won!” was the response by Azerbaijan’s Radik Isaev of men +80kg, when reporters asked him, in his post-match interview, whether he was happy with his performance in a final that some critiqued for lack of action.

Best Medal Celebration: There were dances, cartwheels, coach hugs, face-falls and mat kisses, but the best medal celebration was surely that of Brazil’s bronze medalist Maicon Siqueira in the men +80kg. After winning to ecstatic applause, he climbed the barrier, dived into the audience and crowd surfed into the stands.

Best Chant: The most memorable chant of the competition had been the refrain from “Seven Nation Army” - until Cisse appeared. The chant that lifted the roof off the arena was “Ole, ole, ole – Cisse! Cisse!” with a noise more reminiscent of World Cup football than the Olympics. Cote d’Ivorians in the crowd were astonished at the surprise popularity of their fighter; a local explained that Brazilian crowds spontaneously latch onto names and chant them (their familiarity with the athlete in question notwithstanding). Rarely – perhaps never – in taekwondo’s history has there been such thunderous noise or such rock-stadium ambience in a venue.

Best Music: Taekwondo had vowed to “Rock Rio” with a “Festival of Fight” and the aural backdrop to the competition was thumping pop and rock. Memorable tunes included Led Zeppelin’s “Kashmir” and the James Bond theme, but the one that the crowd chanted the loudest was the riff from White Stripes’ “Seven Nation Army” – an appropriate tune for combat competition. It would have been better if it had been “62 Nation Army” – the number of national teams represented in Rio taekwondo.

Best Bonus: Unlike most sports, taekwondo boasts its own in-house entertainment troupe: The WTF Demonstration Team. Its high-kicking, high-flying brand of showmanship enlivened the Rio downtime - and added smiles the crowd. Olympic legend and five-times rowing medalist Sir Steve Redgrave of GB visited the venue on Day 4 to watch Bianca Walkden and Mahama Cho in action. Both lost. However, he has his entourage were seen laughing, photographing and applauding the demo team show that followed.

Most Collectable Souvenir: Around the venue, the plastic beer cups were identically branded with the Rio logo - but each cup was also decorated with one sport being contested in Rio. Hence, fans walking around with stacks of plastic beer cups as they completed their collections. WTF President Chungwon Choue was served with a taekwondo cup the evening prior to the competition.

Saddest Farewells? (Or not…) Both Team USA’s Steven Lopez (double Olympic gold medalist and one-time Olympic bronze medalist) and Team China’s Jingyu Wu (double Olympic gold medalist) had sparked fevered speculation: Could they add to their medal hauls in Rio? Alas, both great competitors failed to reach the finals. This suggests that we may have seen the last of them at the Olympic Games. Lopez, at 37 (the oldest competitor in Rio taekwondo) is surely nearing retirement, and Wu has made clear that she wants to have a child. Even so: Neither of these great fighters has announced retirement. Lopez has said he will not do so until his coach (elder brother Jean) suggests it and Wu hinted to WTF Comms that she will be in action in Tokyo 2020.