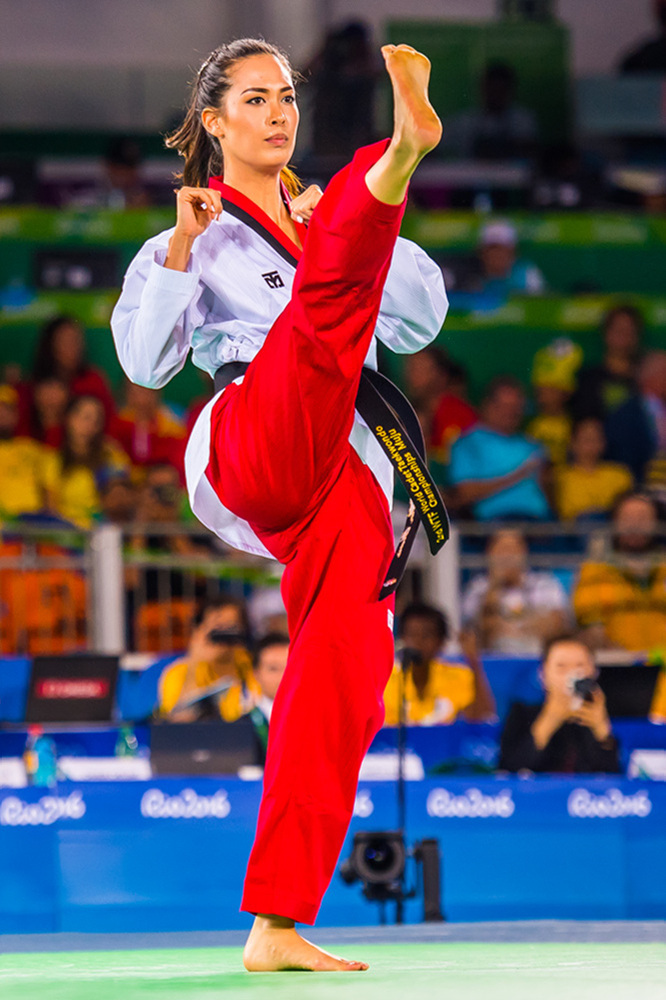 RIO DE JANEIRO, Brazil (Aug 17, 2016) – When she signed up to be a goodwill ambassador for the WTF last year, she did not expect to be performing at the Olympics in front of the world’s taekwondo elite - but what is what happened to beauty queen Catharina Choi on Wednesday.

In keeping with Rio’s carnival ambience, the WTF has vowed to make the Rio taekwondo competition a “festival of fight.” As part of this effort, Choi – a former Miss Korea and former Miss World Brazil, of Brazilian-Korean parentage – was invited to perform a taekwondo/traditional Korean dance routine during a break in the action on the first day of the Rio 2016 Olympic taekwondo competition.

“I am very nervous as I did not perform in front of so many people before,” said the 26-year-old before going on to the field of play. “When I did it as party for my talent show, it was just for the judges!” The routine she performed the same one she used in the Miss World competition.

Choi has been practicing taekwondo “since I was little” but only got serious about the sport when she entered the Miss World Brazil contest. She practices twice a week and promotes the sport to young women who want to stay in shape without bulking up. “If you want to have a slim body and develop slim muscles - do taekwondo!” she advised. “It’s a fun way to burn calories.”

The beauty queen recently returned to university studying marketing, and hopes to open her own online company in the future selling fashion products. Asked who she would support between Team Brazil and Team Korea, she answered, “I have to support Korea, as the Korea team were practicing in my gym in Sao Paolo.”

“In Brazil we have a lot of different social classes, and it is a big problem when kids don’t have opportunities, they go on the wrong path,” she said. “So we teach them taekwondo, and with the sport of course, they don’t go to drugs and gangs; sit keeps them occupied and helps them, and also when they get a black belt they can start teaching so they can get a job out of it too.”

The program, run in Choi’s hometown of Sao Paolo is called “Don’t Run Away From A Fight.” As for herself, she admits she has never used her skills in combat. “I am really scared of fighting!” she said. “I do taekwondo more for calorie burning.”

Even so: To get up on the field of play and demonstrate in front of the world’s very best suggests that Choi has more courage than she lets on.