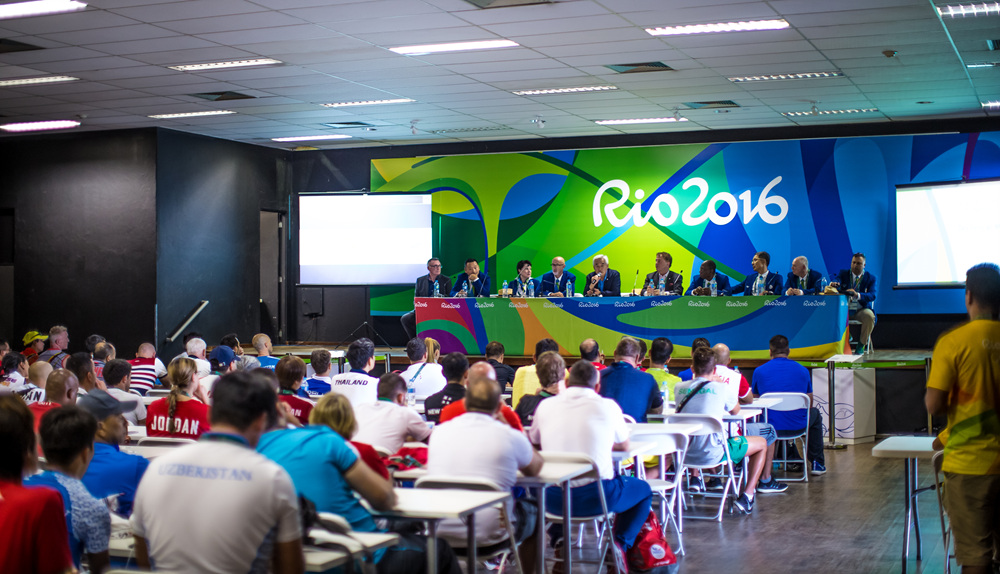 RIO DE JANEIRO, Brazil (August 15, 2016) - With just two days to go before taekwondo's "Festival of Fight" kicks off at the Rio 2016 Olympic Games, team heads of the 63 nations represented in Rio gathered for the draw, a pep talk from WTF President Chungwon Choue, and a briefing on the equipment and rules to be used by Technical Delegate for Rio Philippe Bouedo and Referee Chair Chakir Chelbat.

The meeting was held in the heart of the Olympic park, Riocentro's Pavilion 4.

"London was the best Olympics ever," for taekwondo said Choue. "Rio will be even better." He emphasized that - with new sports being introduced in Tokyo 2020 - it is essential for taekwondo to put on its best-ever show in Rio,

With just eight gold medals available for the 128 athletes registered for Rio, he also advised coaches on Olympic deportment. "Winning is very important," he said, "But losing with dignity and pride is also very respectful."

Bouedo briefed attendees on the equipment to be used - Daedo Generation 2 PSS, Omega Swiss Timing and Dartfish Video Replay. With Dartfish using broadcast-quality cameras, he predicted, "I am confident about not missing any points." He strongly recommended coaches be prudent in using their video replay quotas.

Finally, Sports Manager for Taekwondo Mark Kaufmann briefed all present on the procedures to be used in the venue once the competition gets away on the 17th,

"It was all fine," said Great Britain Team Leader Gary Hall at the conclusion of the meeting "We are looking forward to it - it has been a long wait." Asked if he was facing stress as a coach, he answered, "No stress - focus!"