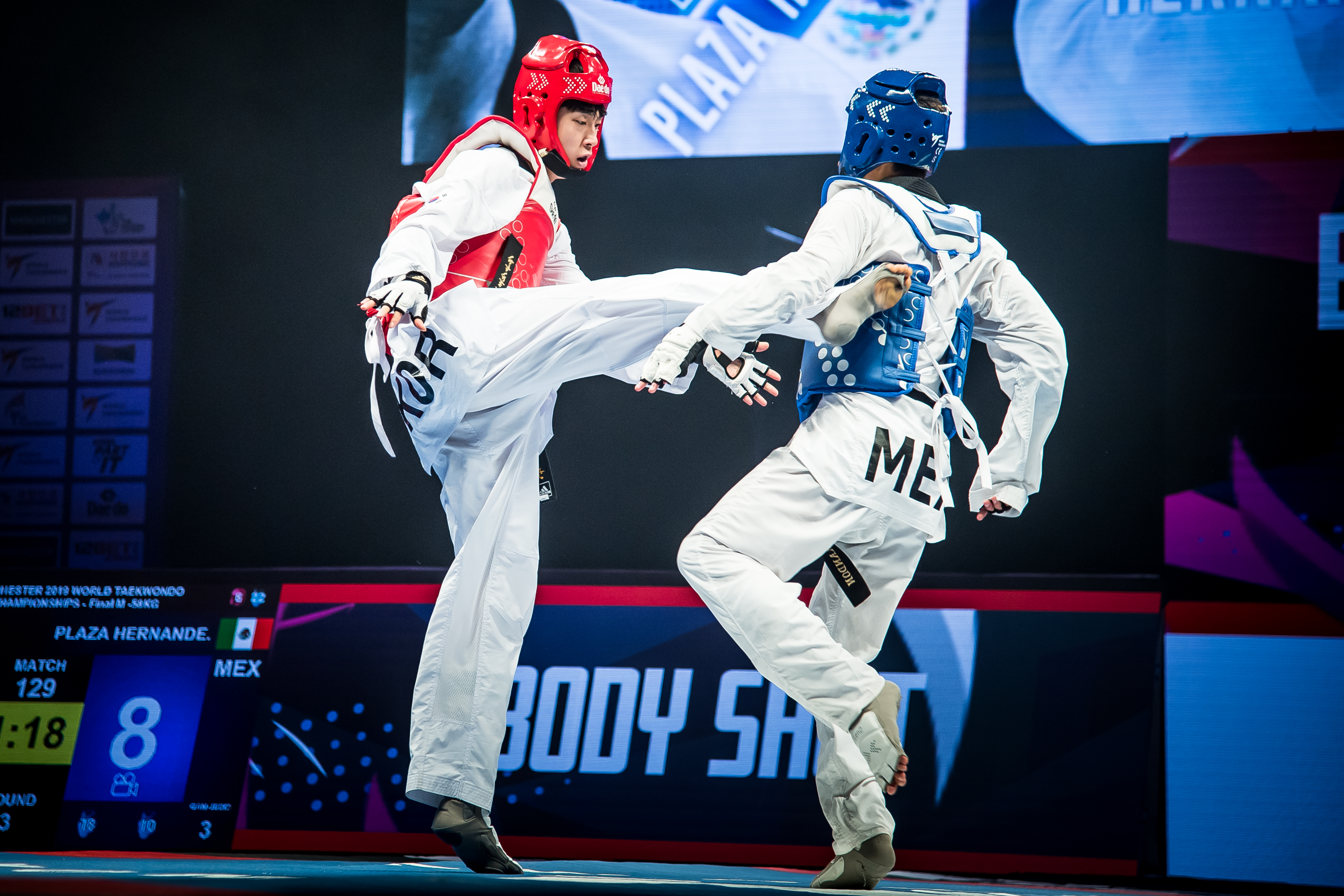 MANCHESTER, UK (May 16, 2019) - The first day of finals at the Manchester 2019 World Taekwondo Championships saw Korea win all three gold medals on offer in a dominant display of taekwondo.

The second day of competition also featured the semi-finals of the women’s +73kg, men’s -54kg and men’s -68kg.

The opening final of the World Championships drew Korea’s reigning World Champion Jae-Young Sim against Iran’s Mahla Momenzadeh. The first round saw both athletes struggle to get past their opponents’ excellent defence. Sim recorded an early kick to the body to take a 2-0 lead. The second round saw more of the same with Momenzadeh trying to show a bit more variety. It paid off as she landed a kick to the body to even the scores. 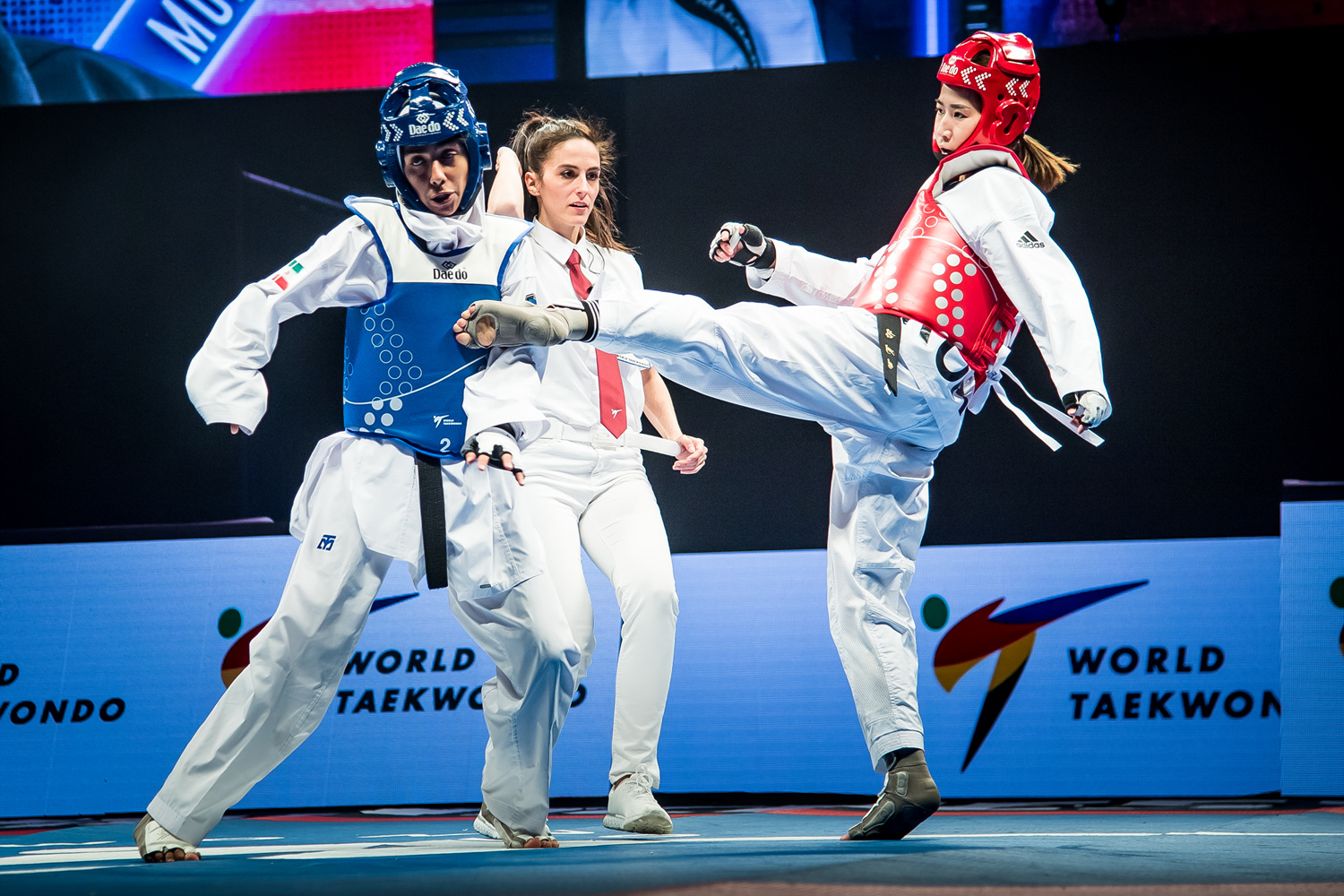 But, Sim landed a head kick followed by a kick to the body to move 7-2 up. Momenzadeh provided an immediate response at the start of the third round to get back into the match and maintain her hunt for her first ever world title. The Iranian pushed Sim to the wire but the current World Champion showed her experience to win the fight 11-6 and take the gold medal.

Xueqin Tan of China and Thailand’s Julanan Khantikulanon who both fought in the semi-finals yesterday took the bronze medals.

The second final of the night was between Korea’s teenager Jun Jang and Mexico’s Brandon Plaza Hernandez. A punch and a crescent kick over the head gave Jang an early 4-0 lead. Hernandez working on the inside landed a kick to the body of his own. Just as Hernandez was growing into the round, Jang produced a number of kicks to the body to take a commanding 11-2 lead into the second round. 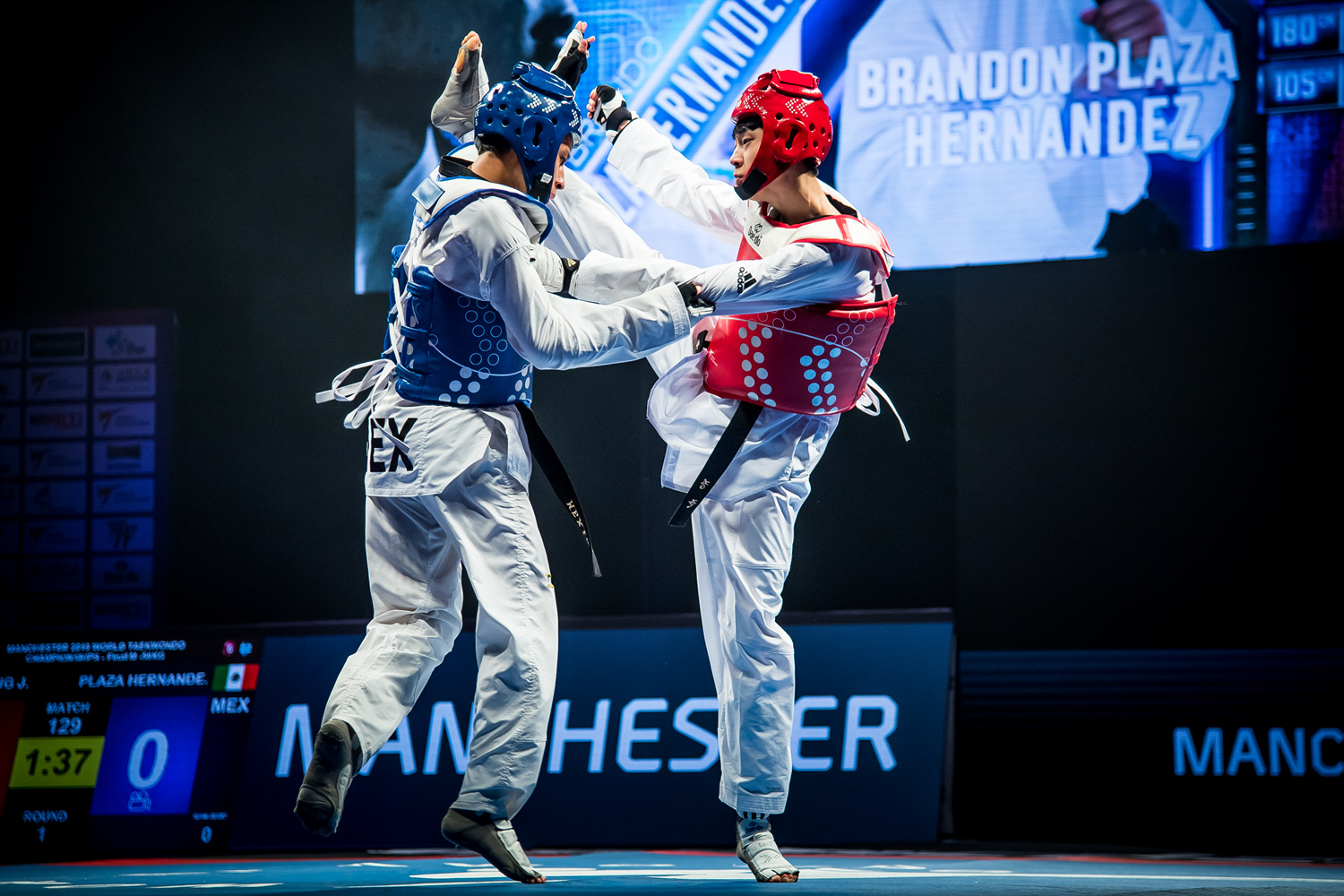 Jang extended the lead further in the second round with a mixture of gam-jeons, punches and a head kick to take the scores to 19-6 lead. In the third round Hernandez didn’t give up and maintained his intensity but Jang was able to weather the storm and build on his lead. Jang won gold with a score of 25-9.

Rui Braganca of Portugal and Lucas Guzman of Argentina took the bronze medals.

The final of the women’s -73kg brought together the experience of Mexico’s Maria Espinoza and the youth of Korea’s Da Bin Lee. Espinoza who first appeared at a World Championships in 2007 was facing Lee who had never competed in a World Championships before. A body shot for Lee gave her an early 2-0 lead. Espinoza responded with a punch and tried to go on the counter but Lee blocked well and went on an attack of her own to go 7-1 up. 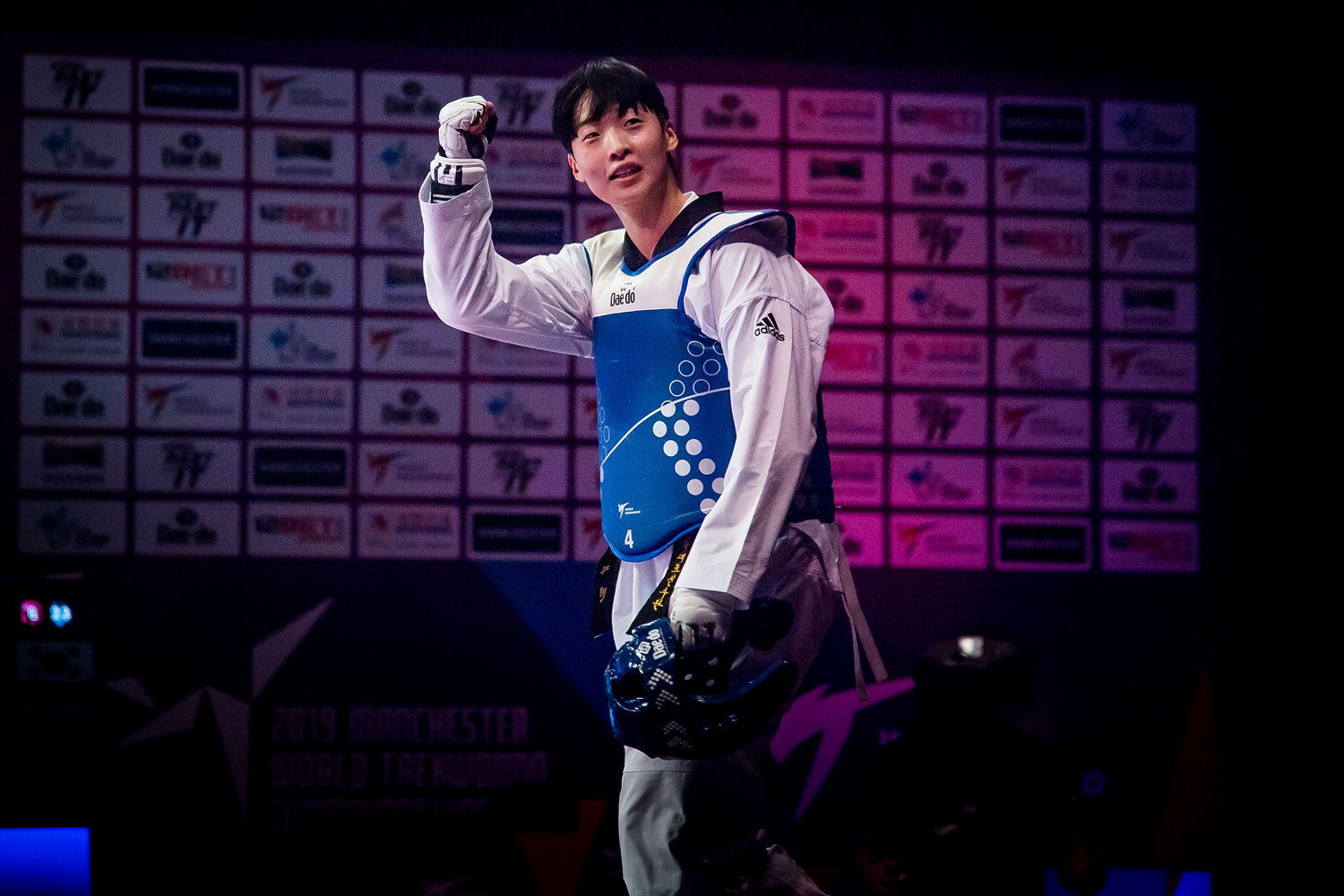 Lee carried on where she left off at the start of the second to take a 9-1 lead. Espinoza kept trying with her quick back leg but to no avail and Lee build a 14-2. In the third round Lee maintained her intensity and landed a number of shots to the body and head shots to win her first ever World Championships 22-2. Marie Paule Ble of France and Turkey’s Nafia Kus won bronze.

In the women’s +73kg it was defending World Champion Bianca Walkden of Great Britain and Rio 2016 gold medallist Shuyin Zheng of China who progressed to tomorrow’s finals. 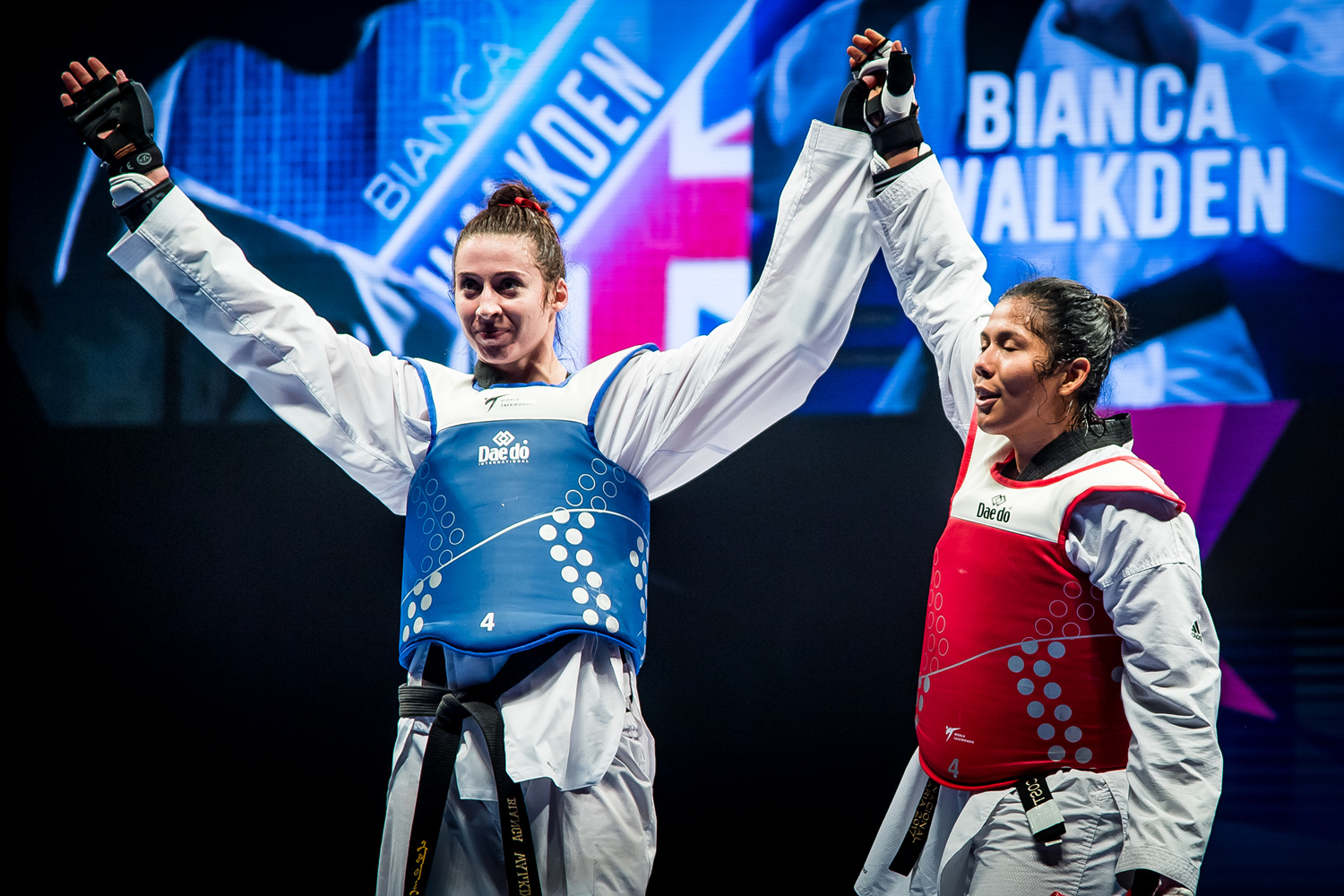 The bronze medals were won by Mexico’s Briseida Acosta and Croatia’s Doris Pole. Acosta took on Walkden in the first of the semi-finals. After a close and nervy first round, Acosta looked like she may upset the home crowd and mange a shock win but Walkden showed her skill and pulled away at the end of the second round, eventually winning the match 10-5. Pole and Zheng produced an equally close fought match. After two rounds there were only four points separating the pair but early in the third Zheng extended her lead and it proved too much as she won the match 9-2.

In the men’s -54kg semi-finals it was Korea’s Jun-Seo Bae and Russia’s Georgy Popov who progressed to the finals. 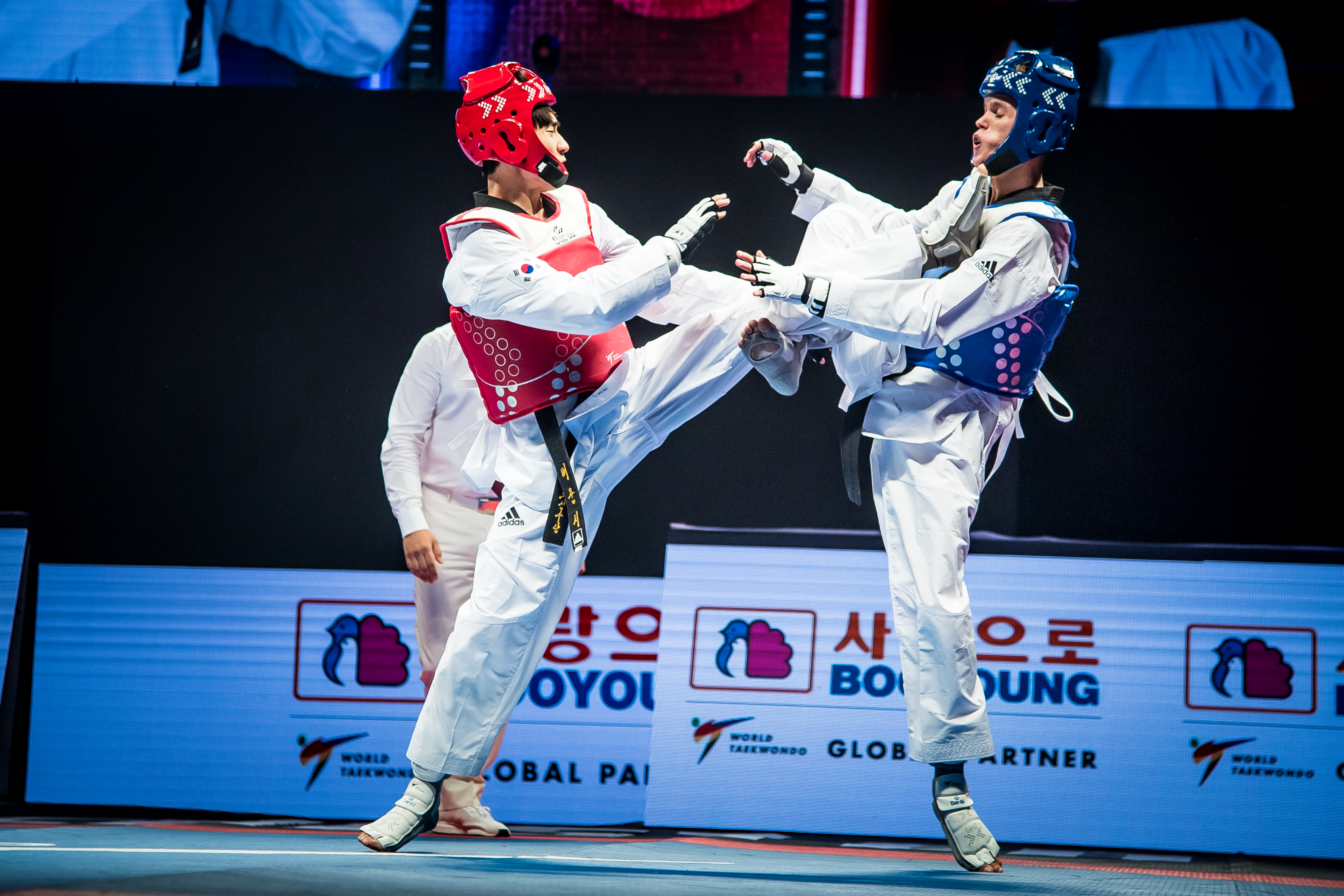 The bronze medals were won by Paulo Melo of Brazil and Armin Hadipour Seighalani of Iran. Melo faced Bae in the opening semi-final and Bae was quick to stamp his authority on the match. Despite Melo’s best efforts he was not able to defend against Bae’s range and Bae won the match 34-16. Popov took an early lead in his final against Seighalani and went into the second round with a 17-3 lead. Seighalani finished with a flourish in the final and attempted a number of head kicks but it was not enough and Popov progressed to the final winning 20-14.

The bronze medals were taken by Korea’s defending champion Dae-Hoon Lee and Russia’s Olympic silver medallist Alexey Denisenko. The first semi final between Sinden and Lee was arguably one of the contests of the Championships so far. 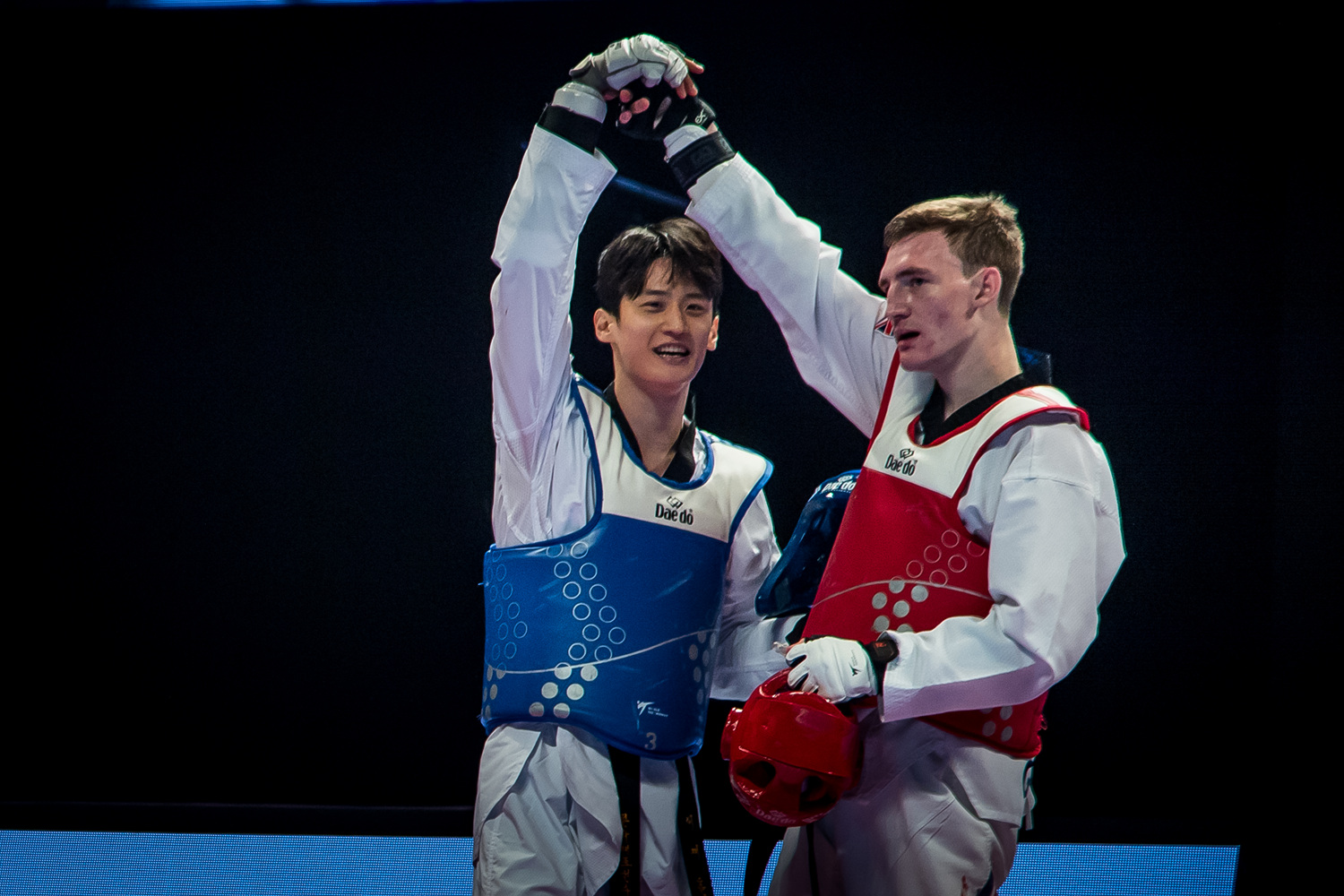 The evenly matched fighters almost took it in turns to lead the contest but going into the final round the score was 14-11 to Lee. Both fighters scored a number of points in the final round and with the scores level and one second to go, Lee landed a punch to go one point ahead, only for Linden to land a kick to the body and win the fight 24-23. The last semi final of the night was a lower scoring affair with Perez Polo taking a 3-0 lead which he maintained up until the end of the second round when Denisenko evened it up at 3-3. In the final round Perez Polo showed his class and won the fight 12-6. 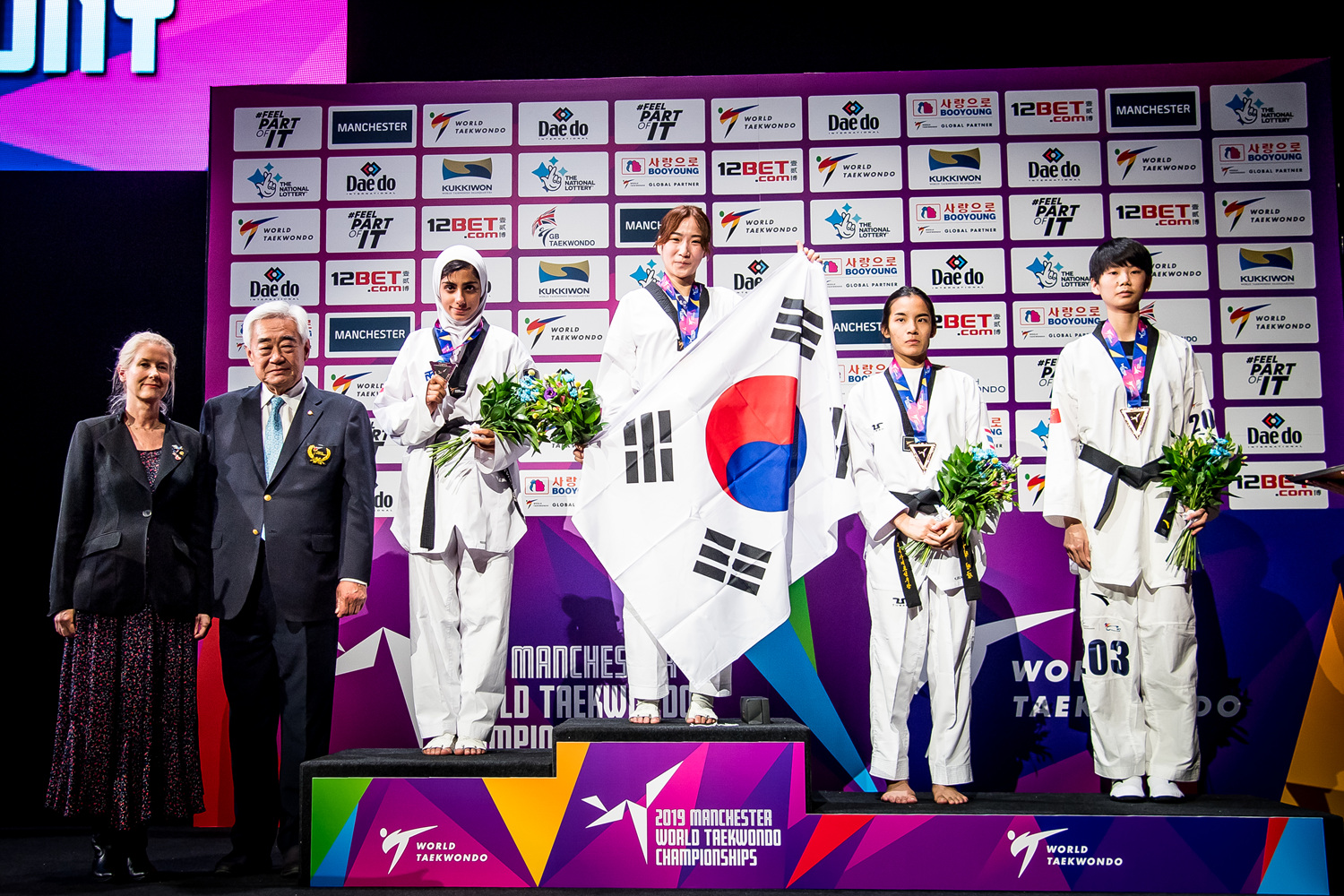 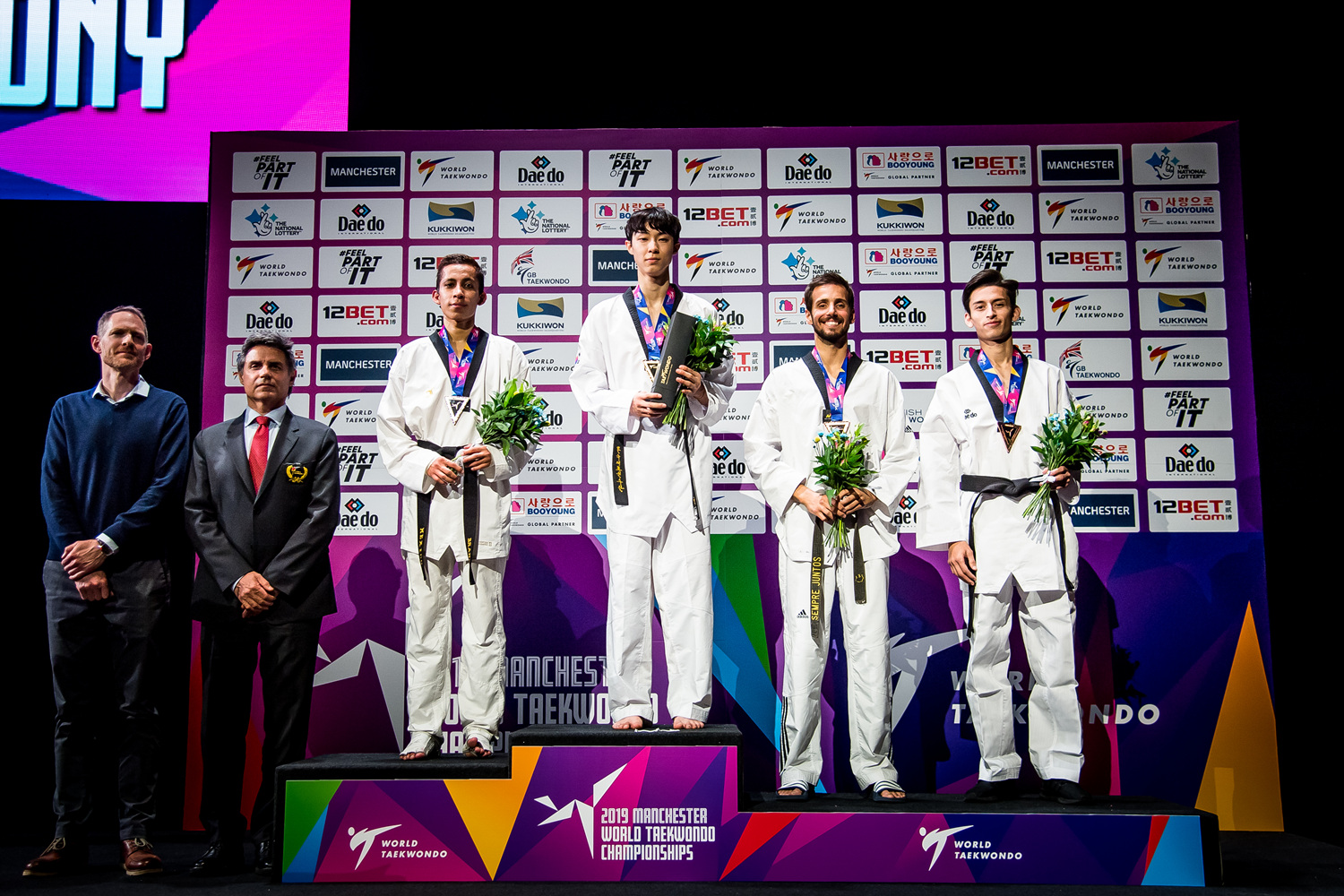 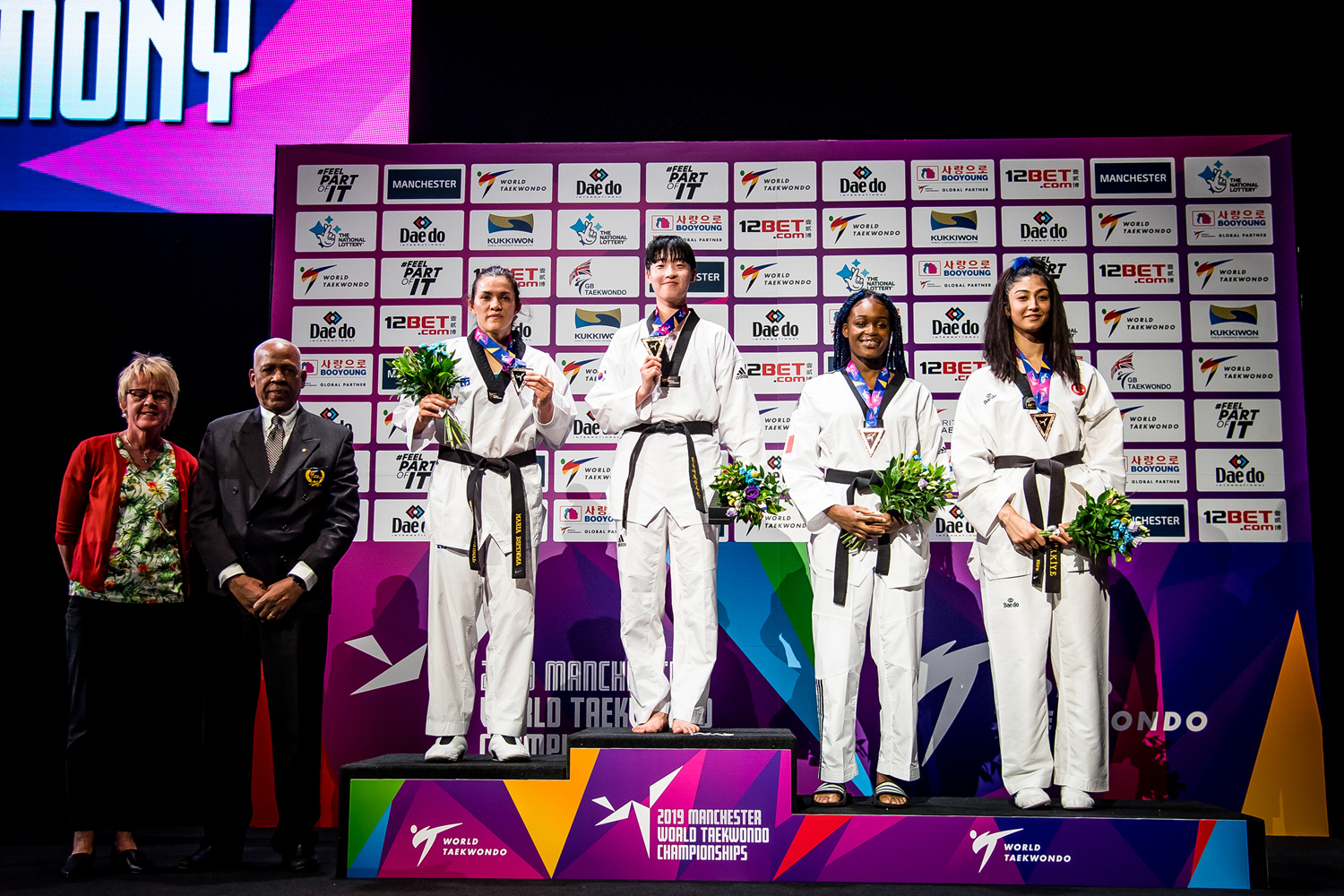