MANCHESTER, UK (May 17, 2019) - A dramatic and exhilarating third day of competition at the Manchester 2019 World Taekwondo Championships saw Great Britain and Korea claim the three golds on offer.

Bianca Walkden and Bradly Sinden of Great Britain won the women’s +73kg and men’s -68kg respectively with Jun-Seo Bae winning gold in the men’s -54kg. The silver medals were won by China, Russia and Spain.

The opening final of the night matched the current World Champion, Bianca Walkden of Great Britain, against the current Olympic champion, Shuyin Zheng of China. The pair had met at the end of last year in the final of the Grand Prix final in Fujairah, where it was Zheng who came out on top.

The bronze medals were won by Mexico’s Briseida Acosta and Croatia’s Doris Pole.

The men’s -54kg saw a battle of youth as the 2016 Youth World Champion Jun-Seo Bae of Korea faced Buenos Aires 2018 Youth Olympic Games gold medallist Georgy Popov of Russia. The exuberance of youth was on display from the onset as both fighters came out at a frenetic pace. It was Bae who took an early lead landing a kick to the head followed by a kick to the body. Popov managed to work his way back into the fight but it was Bae who was in the lead at the end of the first round. 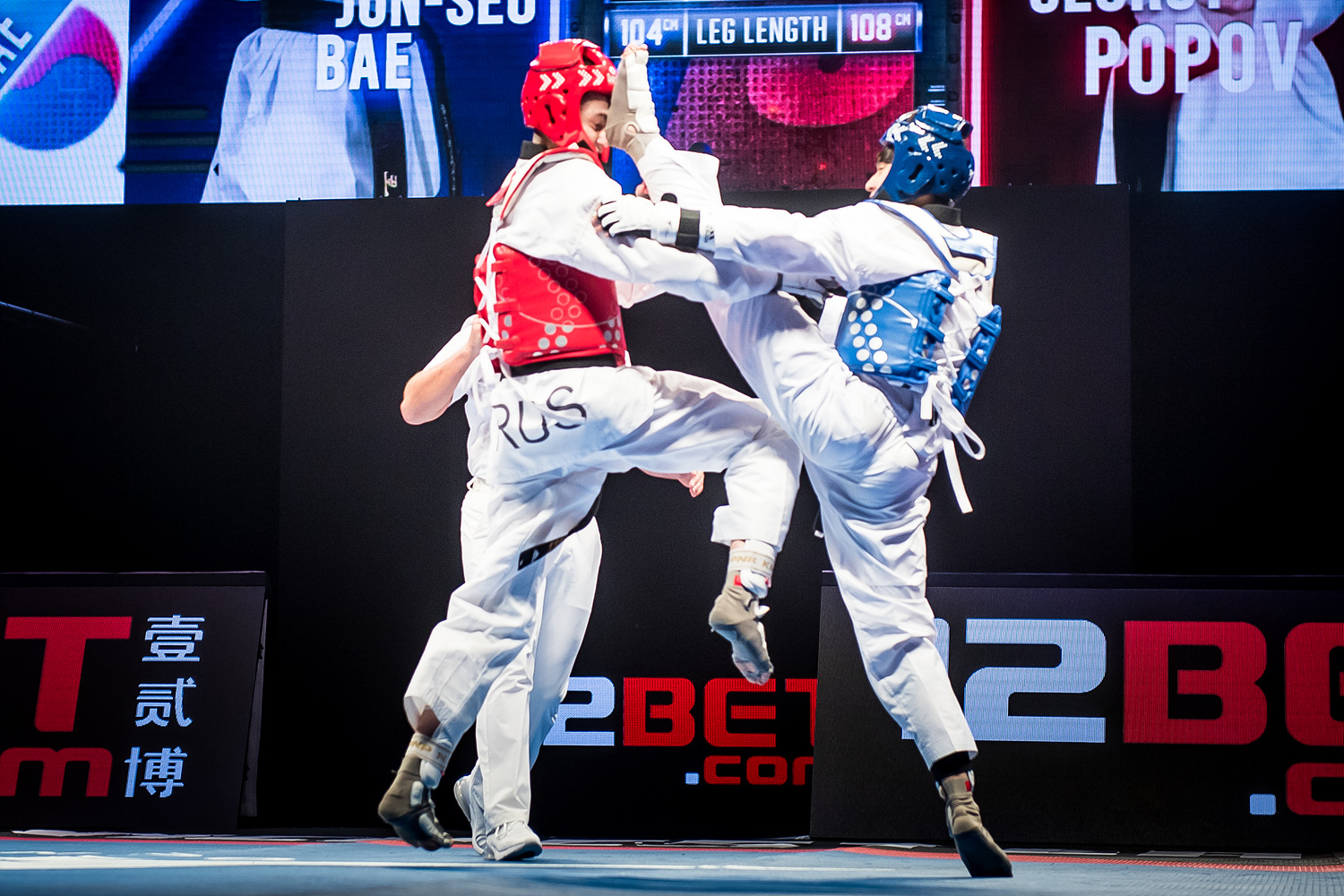 The intensity of the first round appeared to show at the start of the second with both fighters appearing fatigued, but this quickly passed and the intensity of the first round returned. Bae demonstrated the constant kicking technique associated with Korean athletes and seemed to land every one of his attempted kicks. Popov fought well but Bae showed no sign of slowing down and opened up a commanding lead. Bae won the gold 53-24.

The bronze medals were won by Paulo Melo of Brazil and Armin Hadipour Seighalani of Iran.

The last final of the night drew home favourite Bradly Sinden of Great Britain against Javier Perez Polo of Spain. Sinden took an early lead with a gam-jeon and followed up with a twisting kick to the body. However, a double chop kick to the head over the shoulder gave Perez Polo the lead. Body kicks from both athletes took the score to 8-6 at the end of the first round. In the second round a gam-jeon took the score to 8-7 but Polo Perez landed a kick to the body to extend his lead once again. 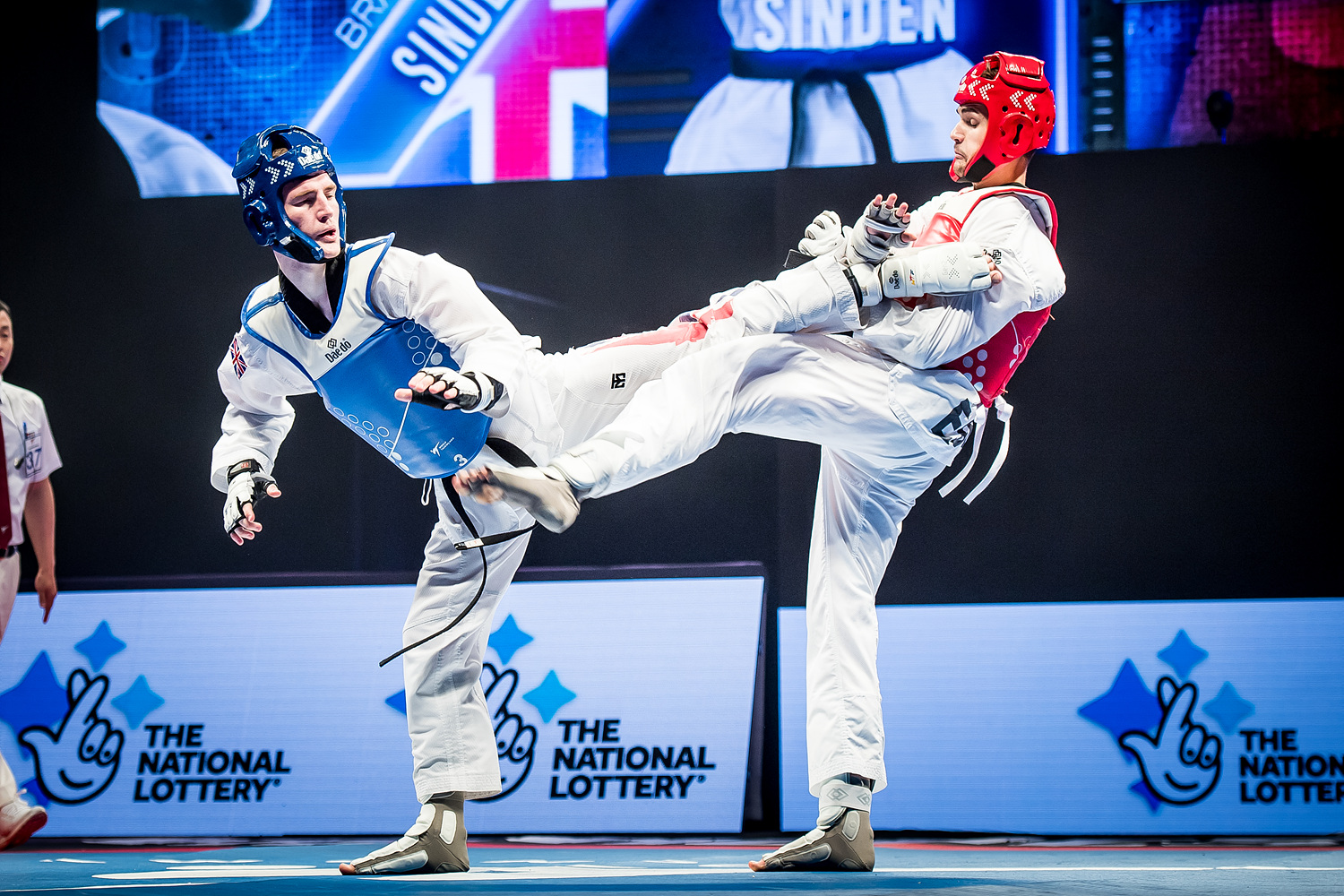 A chop kick over the shoulder gave Sinden the lead but there was only one point in it with little to choose between the two fighters. A head shot with eight seconds to go until the end of the second round looked to have given Polo Perez the lead, but Sinden responded immediately with head kick of his own. Another head shot round the corner from Sinden gave him a four point lead. One more kick to the body with 10 seconds to go put Sinden 24-19 up. Polo Perez on the attack forced two gam-jeons but it wasn’t enough and Sinden won Great Britain’s first ever male world championship gold.

The bronze medals were taken by Korea’s Dae-Hoon Lee and Alexey Denisenko.

In the women’s -49kg it was Rio 2016 Olympic silver medallist Panipak Wongpattanakit and taekwondo veteran and two-time Olympic Champion Jingyu Wu of China who progressed to tomorrow’s finals. 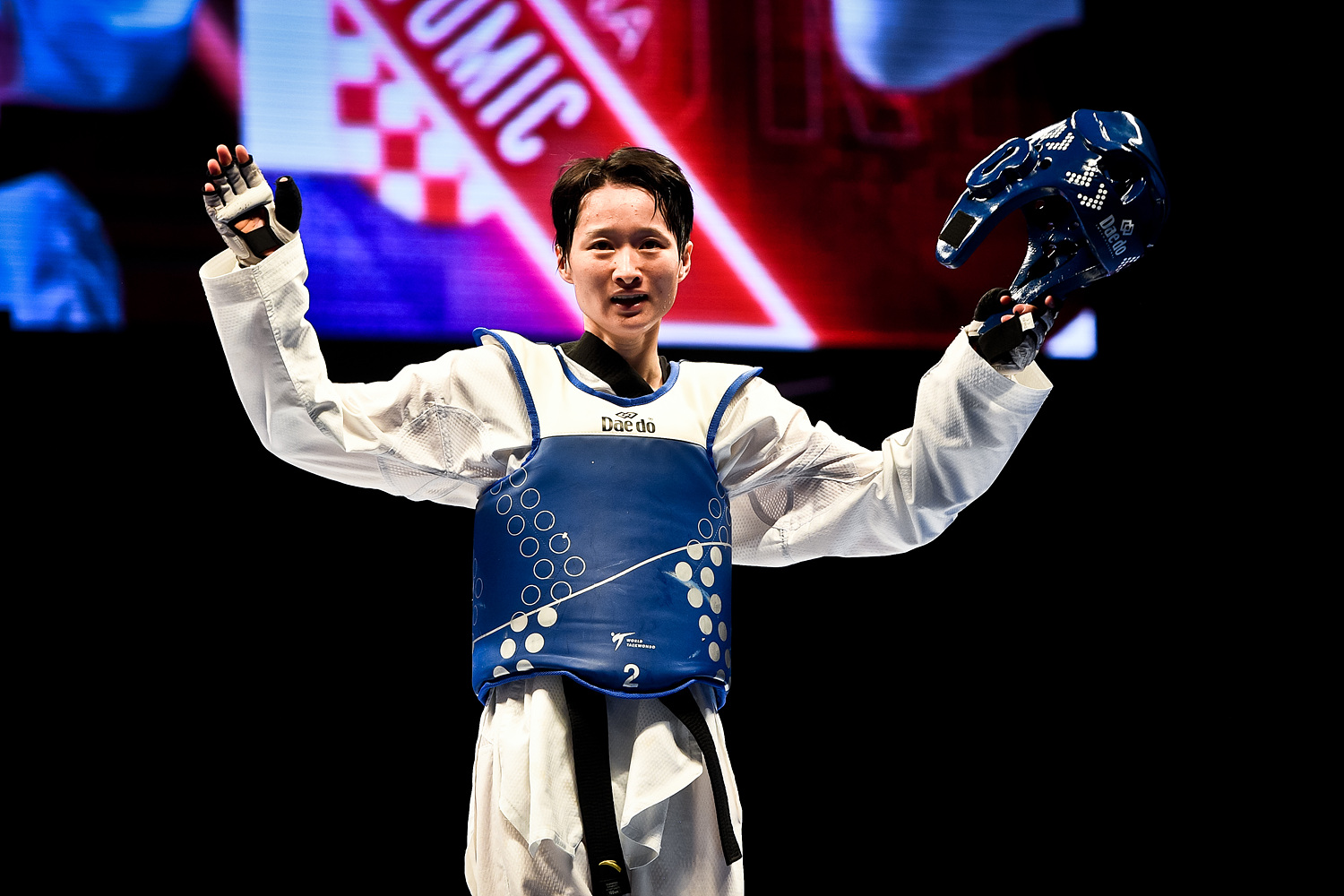 Kristina Tomic of Croatia and Rukiye Yildirim Turkey won bronze. Wongpattanakit faced Yildirim in the first semi-final of the night. Wongpattanakit took an early lead in the match and went into the second round 7-2 up.

Yildirim fought back valiantly and landed a number of shots to the body but Wongpattanakit was too strong and won 24-14. The second semi-final was between Wu and Tomic. The fight started slowly but sprung into life when Wu landed a double headshot only for Tomic to land one of her own moments later. It did not slow down from there but ultimately Tomic was not able to match Wu and Wu booked her place in the final with a score of 30-12.

In the men’s -74kg Italy’s Simone Alessio and Jordan’s Rio 2016 gold medallist Ahmad Abughaush made it through to the finals. 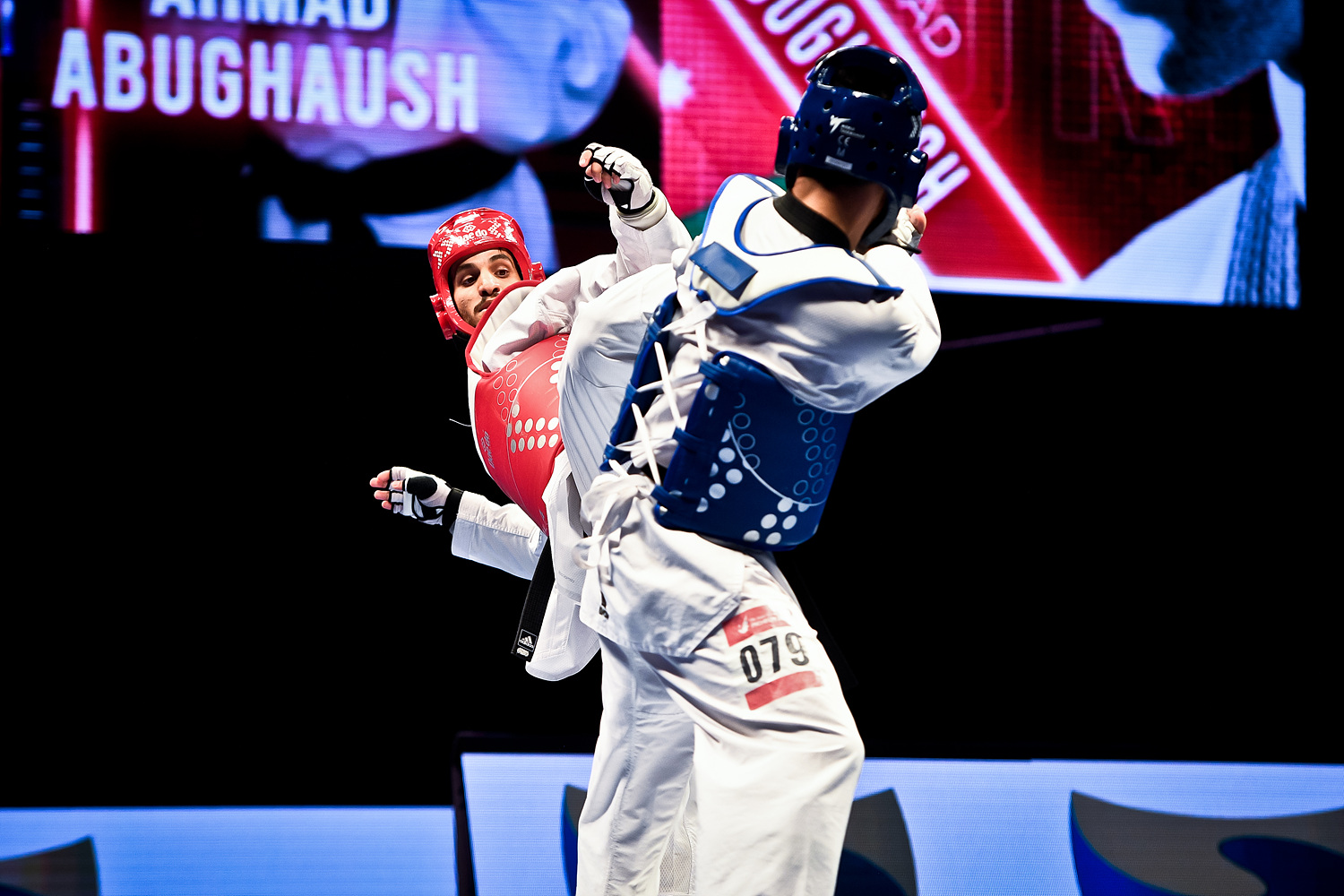 The bronze medals were won by Spain’s Daniel Quesada Barrera and Kairat Sarymsakov from Uzbekistan. Alessio and Barrera faced off in the semi-final. Alessio tried to take advantage of his extra height and leg length while Barrera aimed to stay close to nullify the advantage.

Despite his best efforts Barrera was unable to defend against the long legs of Alessio. The second semi final was between Abughaush and Sarymsakov. Abughaush went 3-0 up in the first round and got the crowd off their seat with attempted an acrobatic scissor kick. Sarymsakov responded well but didn’t have enough and Abughaush won 8-3.

In the women’s -57kg it was two-time Olympic champion Jade Jones of Great Britain and reigning World Champion Ah-Reum Lee who made it into the final. 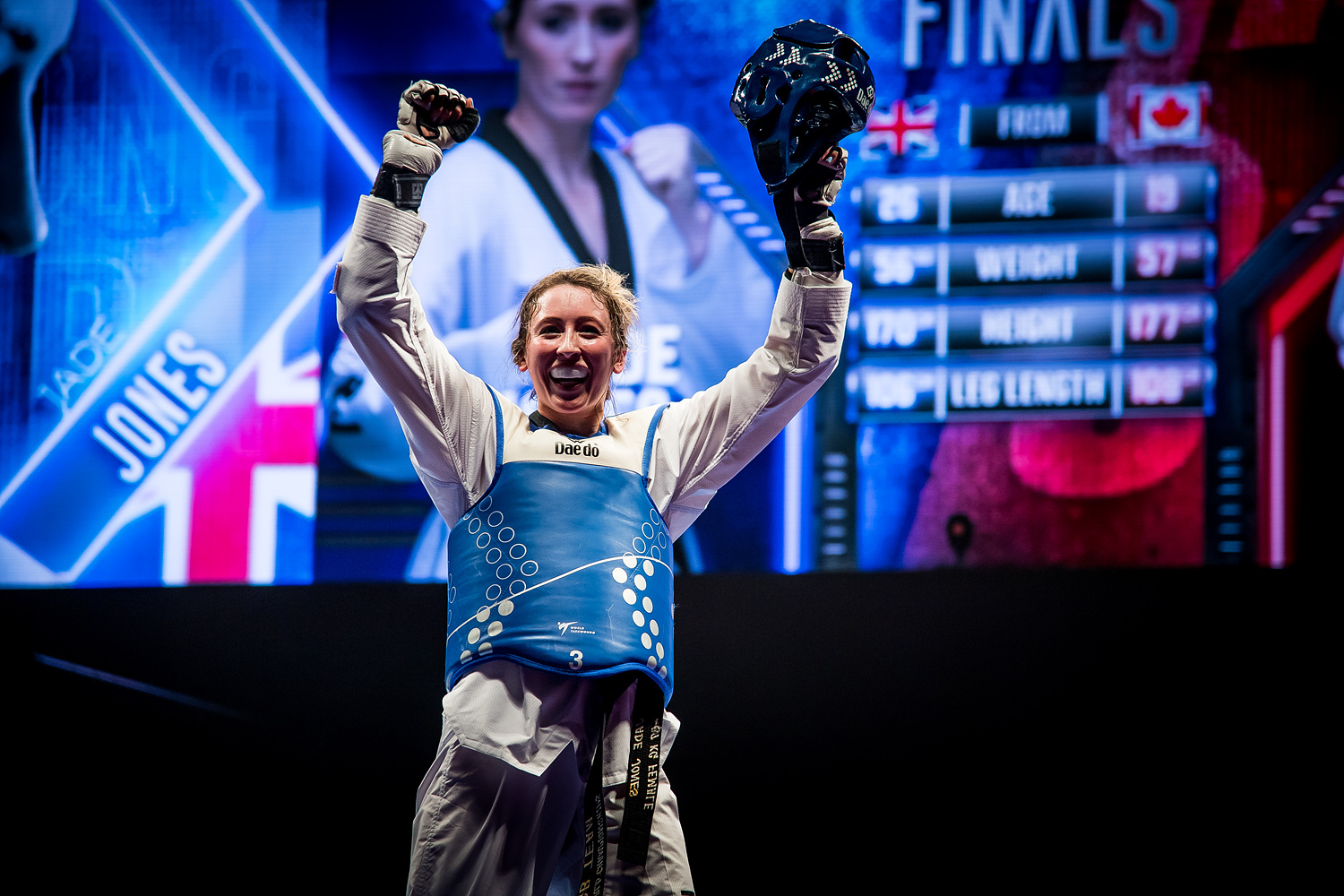 Skylar Park of Canada and Lijun Zhou of China won the bronze medals. Park took on Jones in the first semi final. It was Park who was first to break the deadlock landing a kick to the body but Jones fought back to go 3-2 up after the first round. Only two points separated the pair moving into the final round.

The scores remained low until the final seven seconds when Park was forced to go on the attack to try and close the gap and both fighters landed a number of kicks. However, it was not enough for Park and Jones won 18-12. The second semi final brought together 2018 Grand Slam Champion Zhou against 2017 World Champion Lee. Lee looked comfortable in the first round amassing a 5-0 lead but was pegged back in the second to 9-9. In the final round Lee pulled ahead and won the match 15-12. 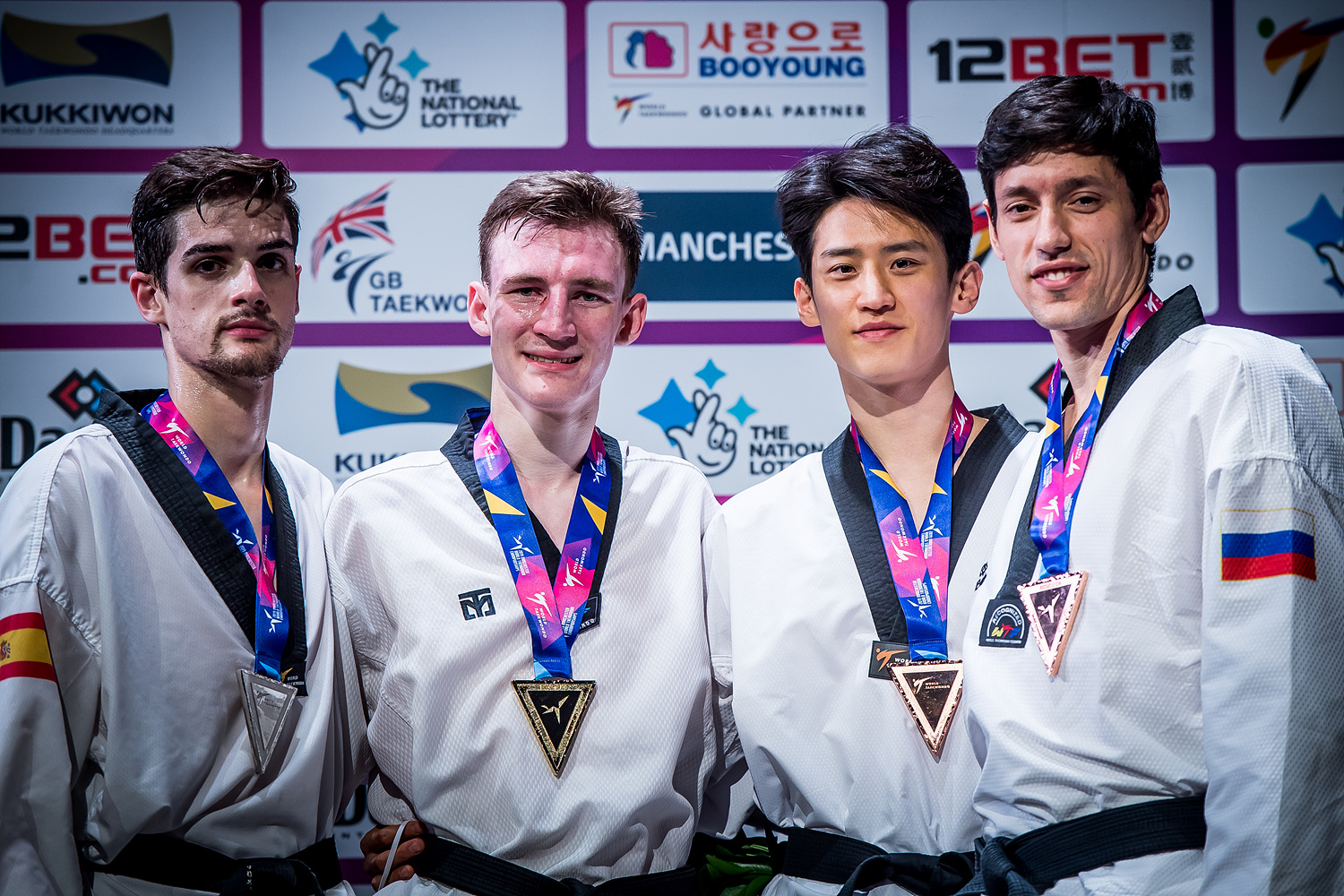 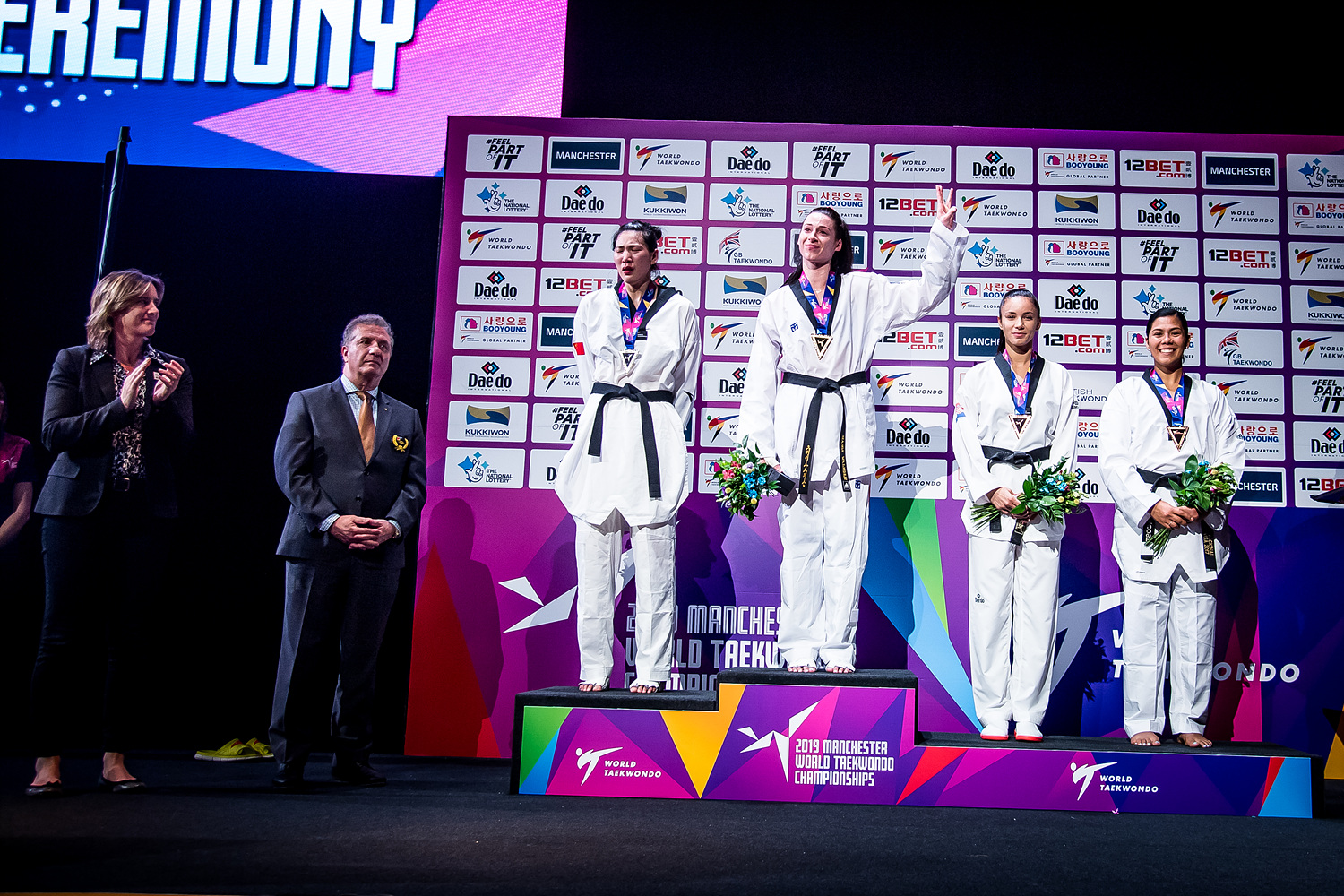