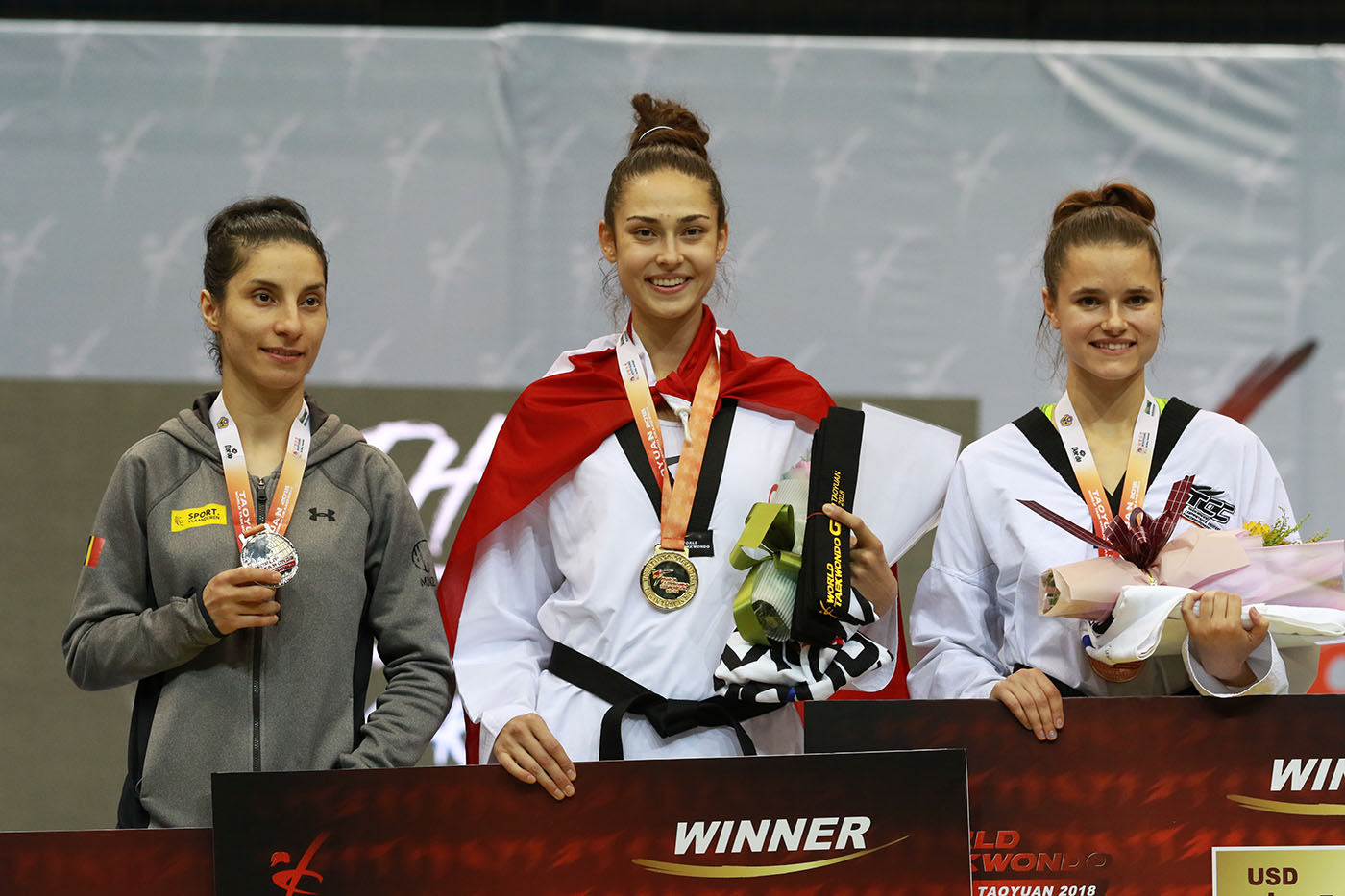 TAOYUAN, Chinese Taipei (Sept. 20, 2018) – The second day of the Taoyuan 2018 World Taekwondo Grand Prix ended with gold medals for Irem Yaman of Turkey, Tae-hun Kim of Korea and  Da-bin Lee of Korea. Silvers were won by Belgium, Spain and GB, while Latvia, China,  Korea, Russia, China (again) and Turkey had to be satisfied with bronzes.

The action took place in the Taoyuan Arena in Taoyuan City, with the Women’s -57kg, Men’s -58kg and Women’s +67kg divisions being contested.

There was particular drama in the women’s categories. Raheleh Asemani – a former refugee from Iran, who sought and won asylum in Belgium - captured silver in the women’s -57kg division. And in the women’s heavyweight category, Team Korea’s Da-bin Lee delivered two of the most scorching performances seen in recent taekwondo history.

In the first semi-final, Inese Tarvida of Latvia took on World Champion Irem Yaman of Turkey.

Both looked well matched, though the Turk had a height and experience advantage. Round 1 ended scoreless.  In the second, Yaman upped the tempo, firing combinations and hitting the body for two points; the round ended on that score. Round 3 saw more action and some rough exchanges, with Tarvida visiting the mats. In the last 20 seconds, 6-3 down, Tarvida landed to the head. So: 6-6 and golden point! Yaman fell, but scored to the body, winning the bout.

Round 1 featured foot fencing and little contact until Asemani struck the body for two points in the last seconds.  The second round featured similar action, with Luo being penalized a point – then almost landing a crescent kick to the head. It ended 3-0, Asemani.  In the third, Asemani displayed some nice footwork, before Luo was felled by what looked like a mis-hit to the throat. Luo attacked forward, driving the smaller Asemani back. She lost a point for stepping out - then another as she fell. With 30 second left, a desperate Asemani employed some nifty footwork to evade Luo’s charge. But it ended 4-3 to the Belgian, putting her into the final.

The final: Yamen versus Asemani. Round 1 was fought at long range. The Turk had the height advantage and looked more aggressive; theBelgian countered. The round ended 0-0.  In the second, Asmani fell under Yaman’s ax kick, going 0-1 down. In the third, Asemani rallied and landed a punch in the final seconds, taking the bout to golden point. Here, the world champion showed her quality, landing a convincing body kick for gold – but a brave show from Asemani. 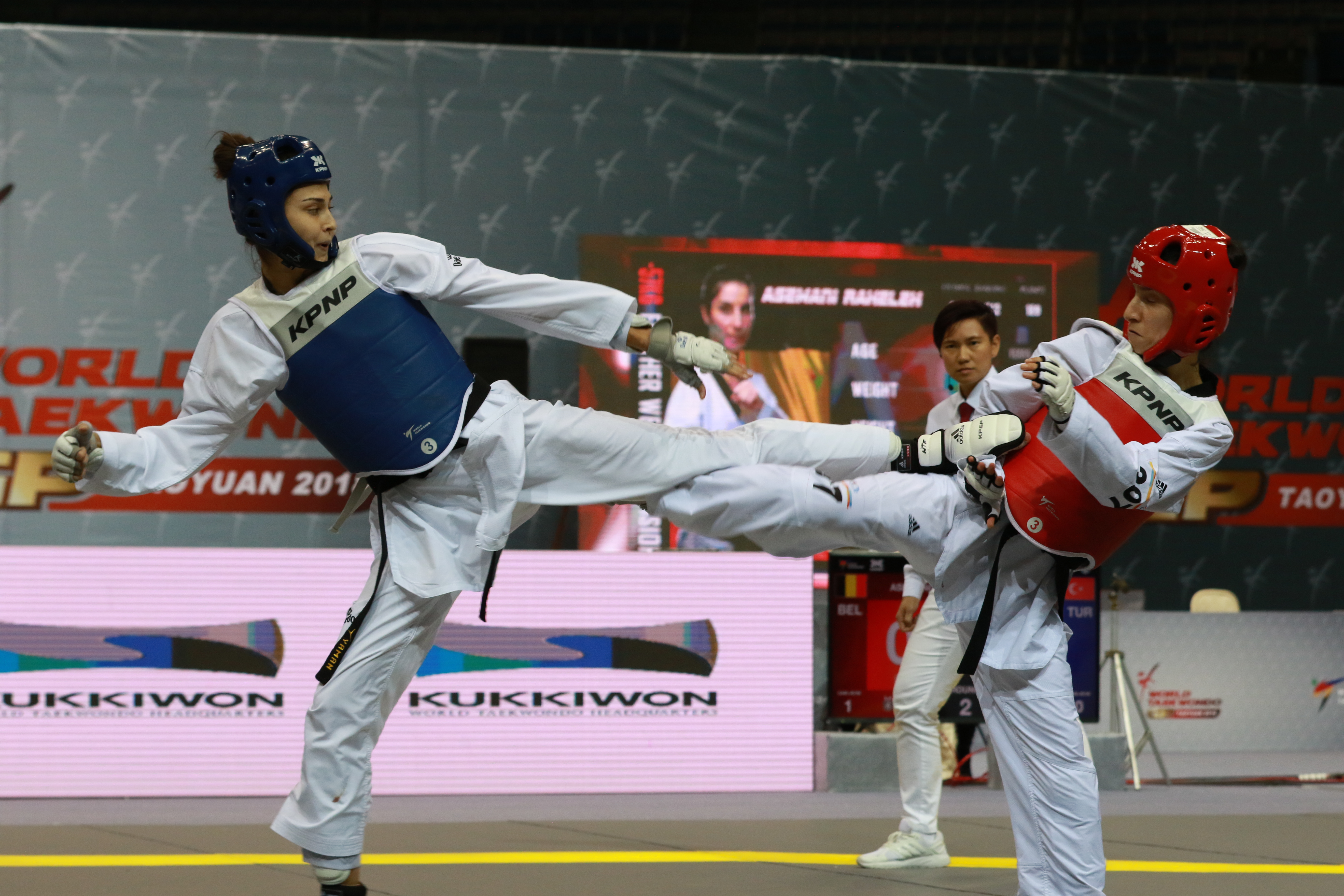 In the category’s first semi-final, triple World Champion Tae-hun Kim of Korea did battle with team mate Jun Jang.  These two know each other’s games inside out, and put on a sweet technical exhibition. It ended 7-7. In golden point, Kim won with a body kick and a penalty.

The second semi saw Spain’s Jesus Tortosa Cabrera battle Russia’s Mikhail Artamonov. The Spaniard was busier and more aggressive, but the round ended 0-0.  In the second, Tortosa Cabrera opened the board with a thunderous punch, ending the round 1-0.  The third saw clinching, some fierce clashes and varied technique, ending 3-1 to Tortosa Cabrera.

The final: Kim versus Tortosa Cabrera. Both fighters went right to work, unleashing middle and low kicks. The Spaniard was penalized for foot jabbing, then Kim extended his lead to the body. Oddly, despite the work rate, the round was low scored: 3-0 to Kim. In the second, Kim landed a head kick from an impossible angle. The Spaniard responded with one of his own – no score -  then the clinch.  The Spaniard raised his work rate and pushed Kim across the mats. Then, more kick dueling, with both men firing ambidextrously. Round 2 ended 7-1 to Kim. In the third,

The Spaniard finally connected to the body for 3-7, then Kim lost a point for 4-7. The action continued with Tortosa Cabrera trying spin kicks, but Kim pressed his own attacks, ending the match with superb evasive footwork. End result: 10-8 and gold for Kim.

The first semi featured GB’s double World Champion Bianca “Queen Bee” Walkden and Turkey’s Nafia “The Amazon” Kus. Walkden, one of the biggest stars in the game, was suffered a loss in the first Grand Prix in Rome, and missed the second in Moscow, came out fighting with speed and power. She ended the first round 4-1 up, and the second 9-1, with Kus looked utterly demoralized. The match ended 10-3 to the Queen Bee.

The second semi pitted Korea’s Asian Games double gold medalist Da-bin Lee against China’s Rio 2016 gold medalist Shuyin “The Beautiful Giraffe” Zheng. It promised to be an interesting fight - the shorter, aggressive Lee taking the fight to the more tactical Zheng - and delivered. Both employed varied technique; Round 1 ended 10-6 to Zheng. In the second, torrid clinchwork earned penalties for Zheng, with Lee looking aggressive. Rough work saw both fighters hit the deck; the referee was kept busy while the crowd roared. Round 2 ended 16-15 to Lee.  In the final round Lee surged out jabbing, headkicking, pushing and punching.  Both fighters kicked low and high; penalties flew left and right. It ended 24-23 to Lee after a tremendous battle.

The final was Walkden against Lee. Clearly, Lee was not intimidated and went forward from the get go. Lee scored first with a punch, 1-0, then Walkden was penalized, but the Queen Bee equalized with a round kick to the body while retreating – a rare technique. Round 1 ended 2-2.  In the second, Lee landed to the body then with a crescent kick connected to the head. It was 7-2, then Lee visited the mats twice.  Lee landed another punch - then an utterly wicked round kick to the jaw. Walkden took a standing count. It was 11-4  to Lee, who hit with yet another arching head kick. Walkden looking either dazed or demoralized at the end of the round, which ended  17-4 to Lee. In the third, Walkden tried head and spin kicks, but Lee was merciless, surging ever further ahead. It ended 22-6, with gold for Lee. It was an amazing result over such a top-quality opponent - truly, a new star of female taekwondo has been born. 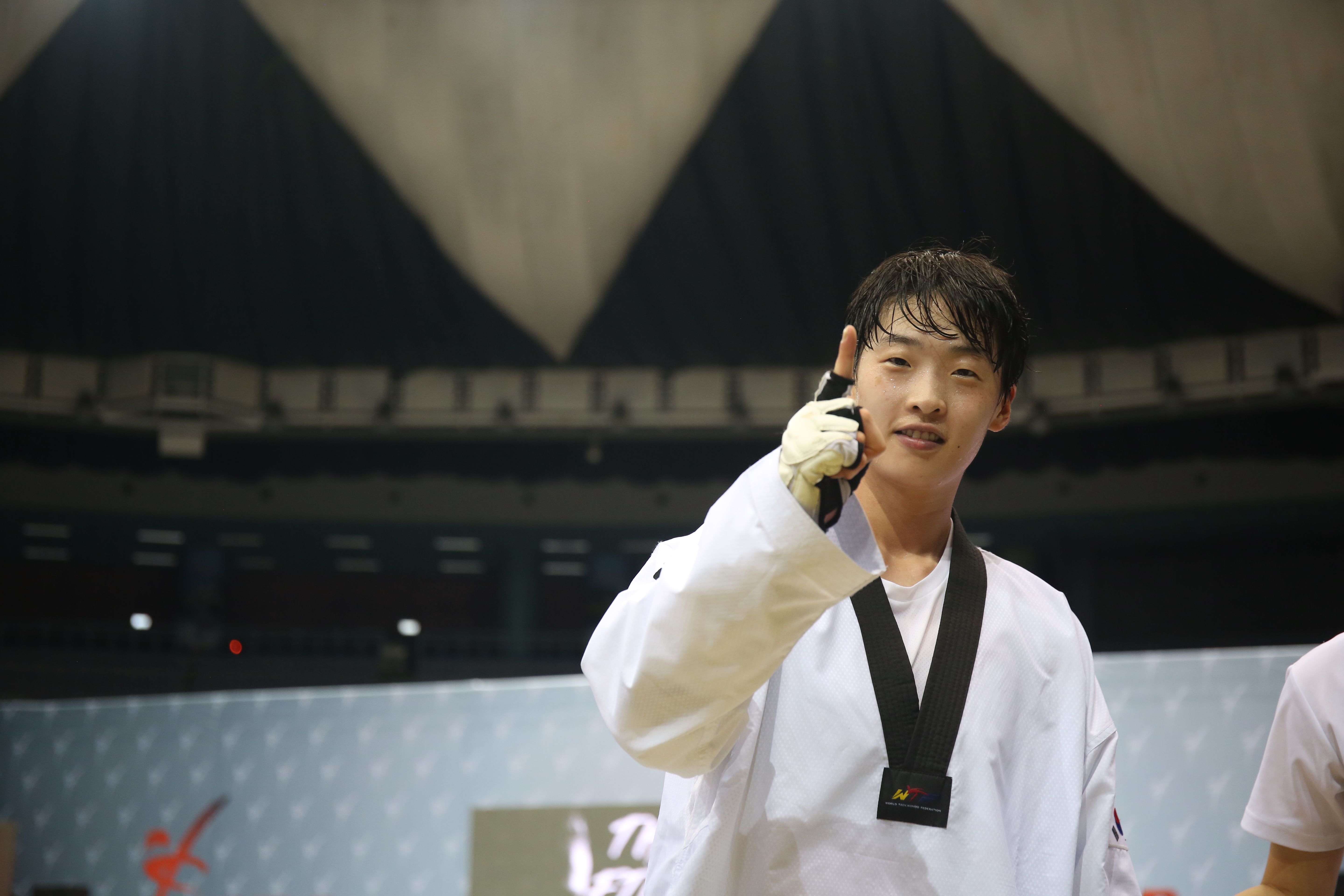 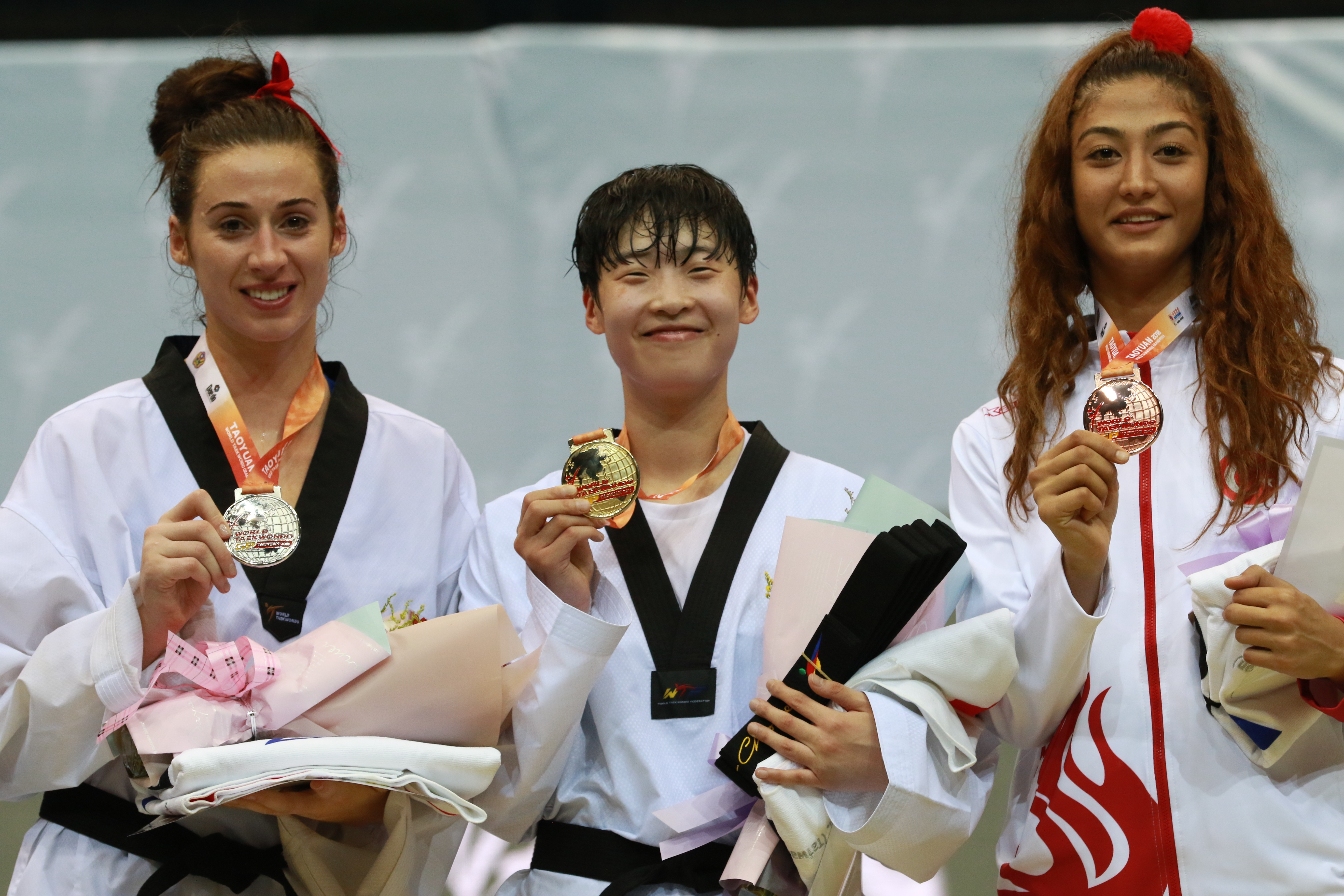 That ended the evening. Action continues at the Taoyuan Arena tomorrow for the third and final day, when the Women’s -49kg, and Men’s -80kg categories are contested.