A high-level WTF delegation, on a fact-finding mission to the Himalayan nation, was warmly welcomed by national leaders. But at ground-zero, the extent of the destruction wreaked by 2015’s earthquakes made clear the urgency of their mission 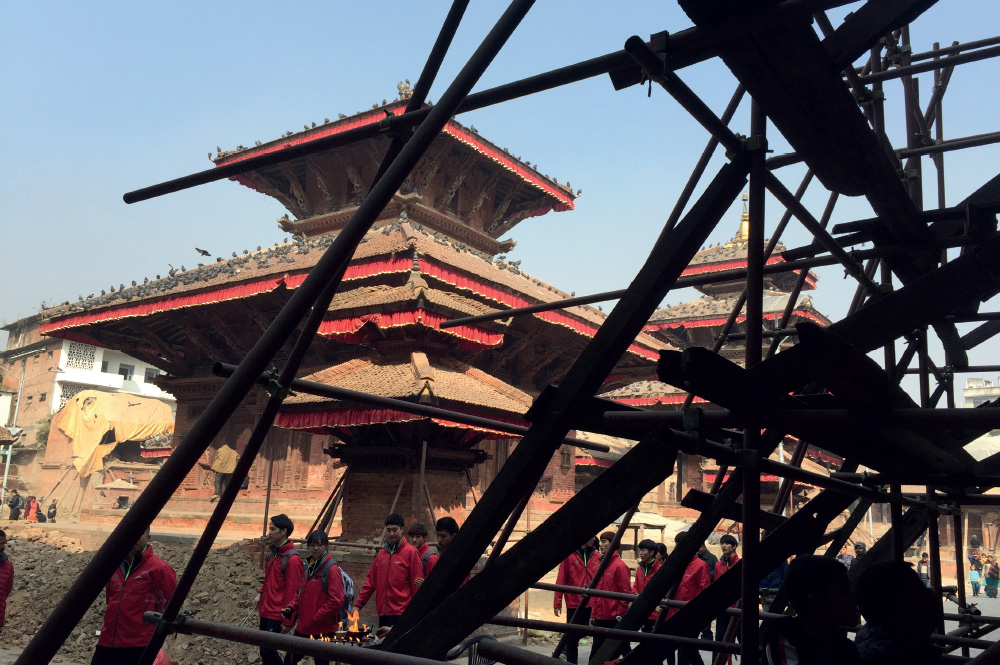 “I was in the forest when I heard a sound that I thought was a helicopter – but there was no helicopter,” he said, recalling the murderous earthquake of April 2015.

“I ran and I ran. I found my father, but our home had been totally destroyed. There was a buffalo wandering in the ruins …” 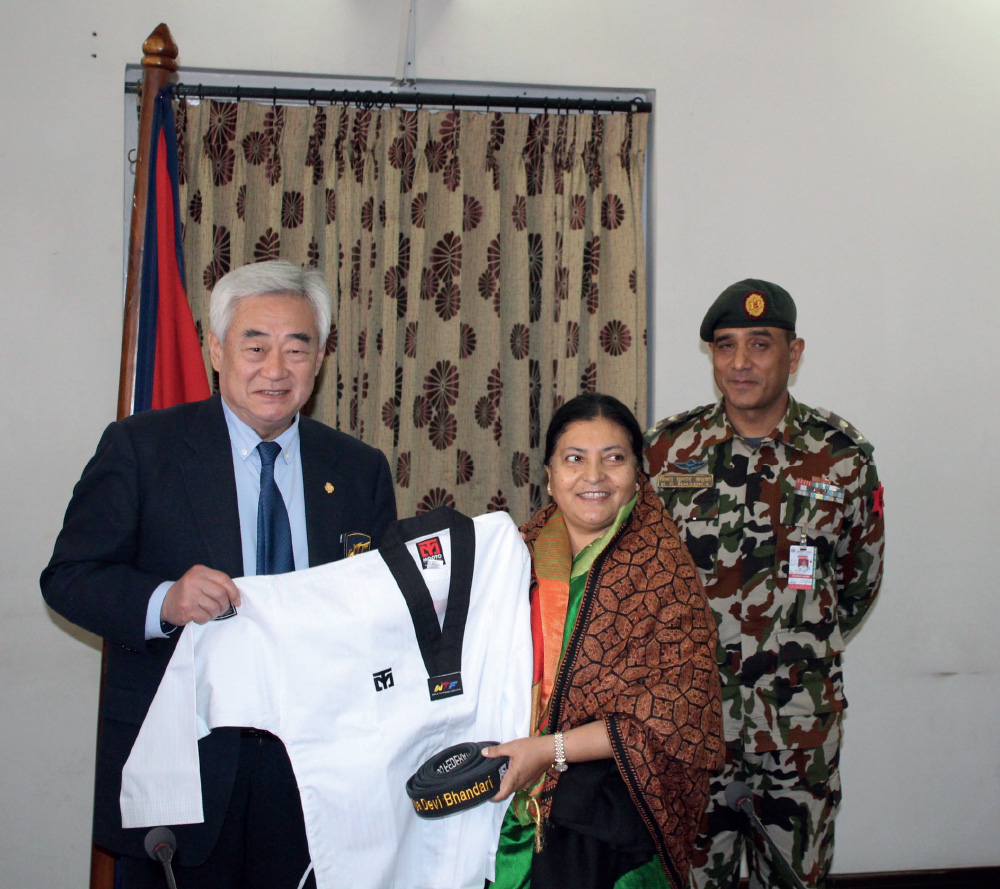 The WTF has already established pilot programs for Syrian refugees in Jordan and Turkey. Nepal presents a different problem: People displaced and disempowered not by political strife, but by natural disaster. The fact-finding mission was designed to see how the WTF can help in such situations, assisting physical and psychological recovery by empowering survivors with taekwondo. Nepal will provide a benchmark for future programs in disaster zones elsewhere.

The delegation got straight down to business. Within hours of touching down in Kathmandu, they were motorcaded to the official residence of Prime Minister Khadga Prasad Sharma Oli. There, the prime minister thanked the delegation for their visit, and discussed the country’s plans for an official national sport – taekwondo is one candidate for the position, vying with cricket and volleyball. Choue briefed him on the WTF mission.

The following day, the mission visited Kathmandu’s downtown historical district. Shown around by a tourist guide, they met citizens, merchants and policemen - even a “living goddess” resident in a major Hindu temple. Members of the WTF Demonstration Team took the opportunity to show some moves, and there was humor when one team member came under attack from a mischievous monkey. 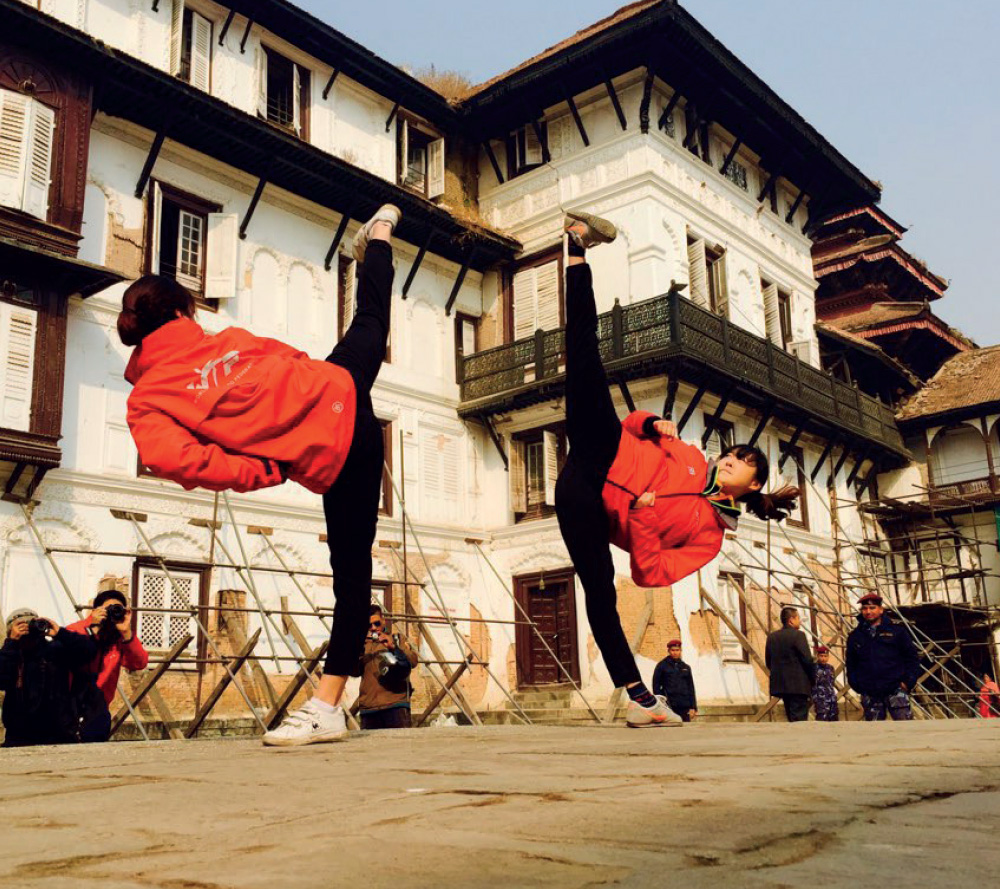 But despite the bustle, color and general air of good cheer, earthquake damage was impossible to miss. A 12th century temple, utterly pulverized, lay in a heap of ruins. Huge cracks defaced the architecture of the palace. Many buildings displayed similar damage, scaffolding propped up historic sites, and piles of rubble and building materials lay everywhere.

“It was very sad that some historical temples and buildings have gone; hopefully, they can be slowly repaired, but it won’t be the same,“ said OTU President Kotsifas. “One thing we did notice was the friendship and spirt of the Nepalese people: It was high and positive. I am pretty confident that that spirit will see you through this difficult time.”

ATU President Lee added that he was “heartbroken” by what he had seen. “This morning I saw some of the sights of the destruction of the earthquake near the old palace,” a shaken Choue told a press conference later that day, before vowing, “We will support you.”

That evening, a reception dinner was held at the Annapurna Hotel: among the guests were ministers and MPs, as well as sports and taekwondo officials.
One particularly honored guest was the remarkable Anuradha Koirala, dubbed a “CNN Hero” in 2010 and winner of the “Mother Teresa” award in 2014. The NGO she heads, Maiti Nepal, rescues and rehabilitates Nepalese girls trafficked to brothels. At the reception, the tiny lady – who founded the organization after herself suffering domestic abuse – thanked Choue and Lee for their work; Maiti Nepal is empowering victims of human trafficking by teaching them taekwondo. 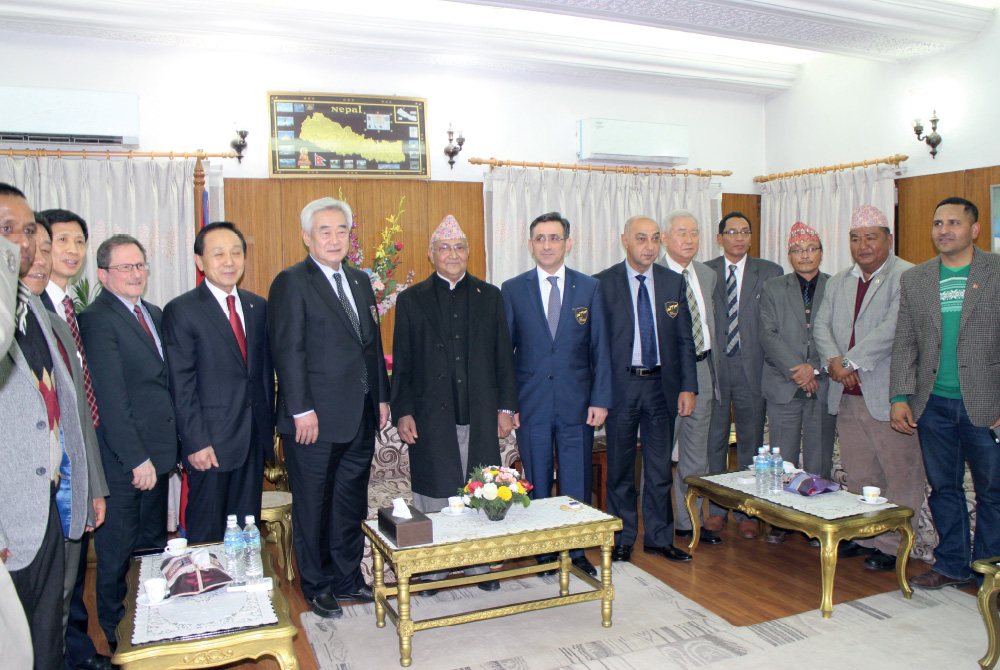 The next day, the mission embarked in vehicles for a three-hour drive through scenic hills and valleys to the worst-hit area of the country: Sindhupalchwok district. What awaited the mission in the district town of Khadi Chaur, set in a valley overlooked by steep-sided mountains, was astounding.

The little town’s main street was lined with cheering schoolchildren attired in taekwondo tracksuits. Traditional dancers and a band playing giant brass trumpets serenaded the delegation, while townspeople cheered from streets, shops - even rooftops. As delegation members proceeded through the packed crowd, their necks were draped in garlands - scarves and floral necklaces. 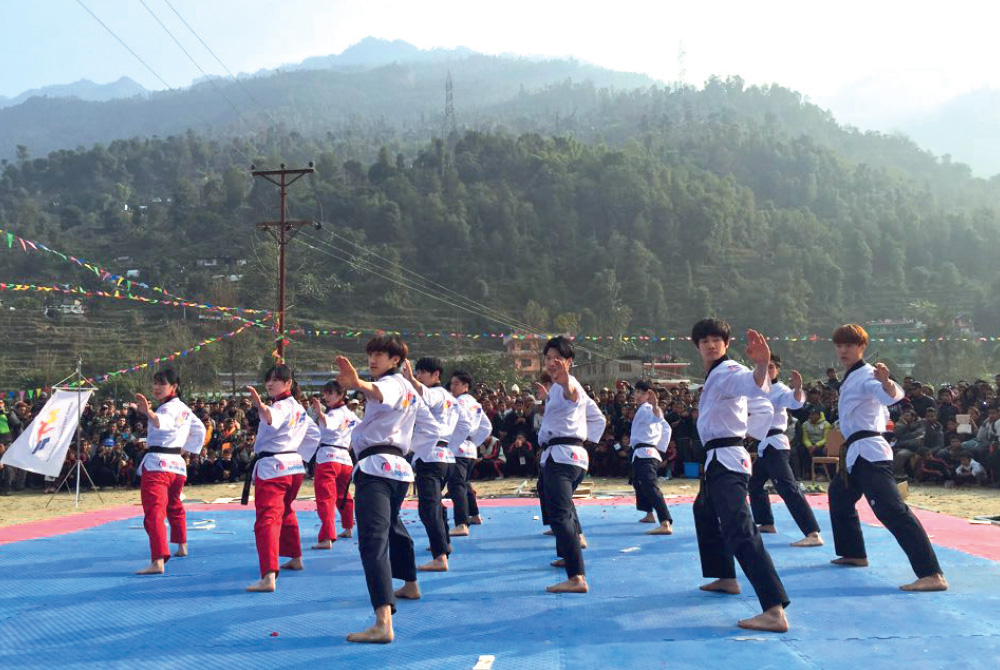 In an impassioned welcoming speech, Nepalese Sports and Youth Minister Shatya Narayan Mandal reminded the crowd of the power of sport. “All around the world people know Messi even if they don’t know who the president of Argentina is,” he said, referring to the legendary footballer. “This shows that sport can be more powerful than politics.”

He then handed over the rostrum to the WTF leader.

After another speech by Nepalese Vice President Nanda Bahadur Pun, the project was officially inaugurated. A check for US$10,000, 300 taekwondo uniforms and three boxes of kicking pads were presented to local officials, before plaques of appreciation and citations were handed to Nepalese VIPs.

Then the WTF Demonstration Team took to the field, performing high-altitude board breaks, self-defense techniques and gymnastic moves – spiced up with a funky routine to the latest Psy hit, “Daddy” and some Nepalese-inspired dance moves. They drew laughs, cheers and applause. They were followed by traditional Nepalese dancers.

The delegation reboarded their transport and continued driving. Across the district, 3,640 people were killed by the April 2015 earthquake; 20,000 were injured; and 70,000 homes were badly damaged. While the town did not appear heavily impacted, scenes several miles up the road were staggering.

Buildings in all villages were interspersed with piles of rubble. In a surreal sight, houses, pylons and trees had subsided into a river. The convoy passed through a kilometer-long stretch of what looked like a lunar landscape – pile after pile of colossal boulders. The result of a calamitous landslide, it was a scene of almost Biblical destruction.

“I had never been in an earthquake zone before today,” said OTU President Kotsifas. “I was overwhelmed and shocked.” 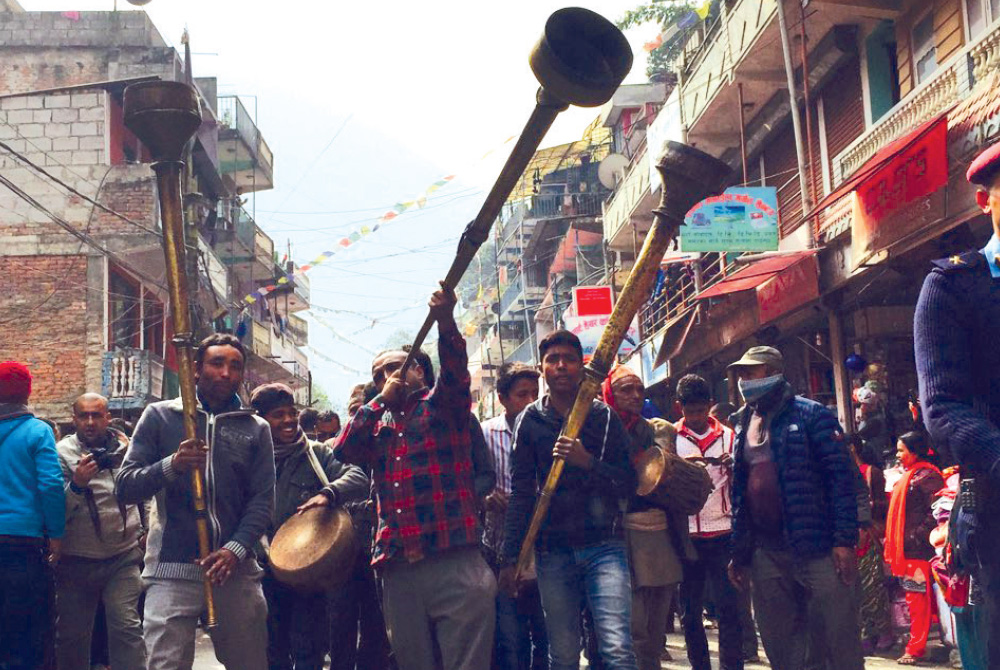 On their penultimate day, the delegation visited the Nepal National Police Academy for a performance by the WTF Demonstration Team together with senior police officers. They also met Pushpa Kamal Dahal, former prime minister and chairman of the United Nepal Communist Party, to exchange opinions on how to further develop taekwondo in Nepal.

On their final day in-country, the delegation was received by the president of Nepal. “Taekwondo is a very popular sport in our country,” said President Bidhya Devi Bhandari, referring to the 65,000 practitioners in Nepal. “Taekwondo is not only a sport, but also it is education, which helps form a new well-disciplined generation.”

She thanked Choue for WTF moves to help resolve the global refugee crisis. “I think the global migration issue, which has hit Europe hard, will soon affect South Asia,” she said. “In this regard, the WTF’s humanitarian project will be very helpful.”

During their meeting, Choue briefed her on the delegation’s mission, asked her to support taekwondo’s adoption as a national sport and presented her with a 9th-dan honorary black belt. “We had a very successful pilot project here in Nepal,” he said. “The project will soon be in full swing, assisting earthquake victims - especially children.”

Throughout the trip, the delegation had been graciously received, not just by elite officials, but also by ordinary people. 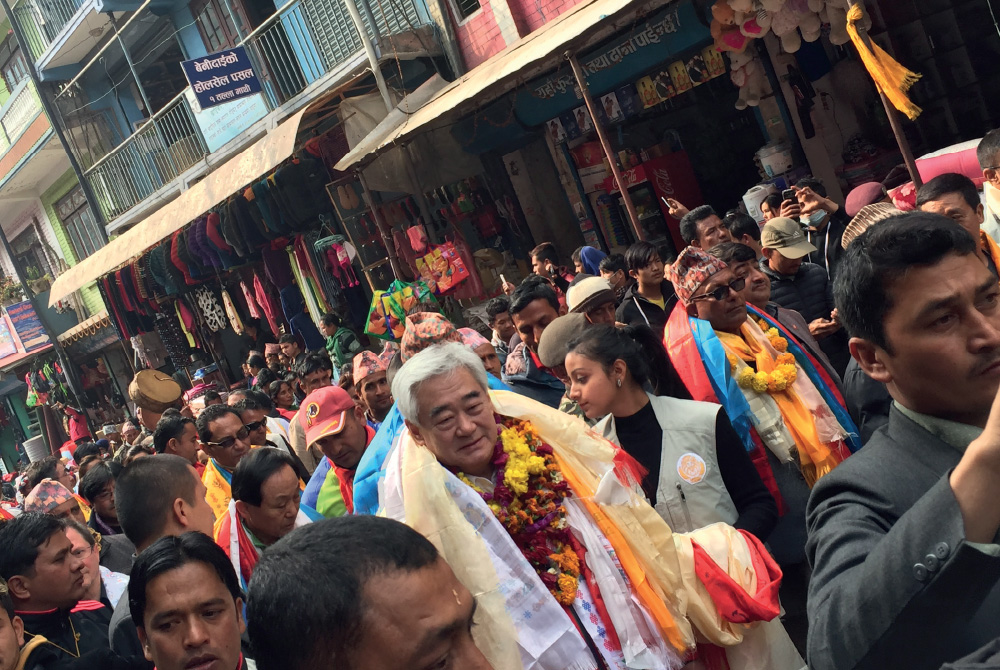 “A lot of people are under stress right now; young people need to have their confidence back and feel there is something contributing to their physical and mental health,” said Prajeena Karmacharya, a Nepalese citizen based in Canada who was revisiting her home country. “So taekwondo, as a well-renowned sport, can help overcome the mental stress, build confidence and help people come together.”

Those include 12-year-old Raja Khadka, the little boy who lost his home. A taekwondo practitioner, he considered it “a very good and disciplined sport.” What were his thoughts on meeting such a high-profile delegation visiting his hometown? “I am very, very happy,” he said.

With the pilot project inaugurated, it is now incumbent upon the WTF to deliver hope and dreams to thousands of Nepalese - by giving them a gift that will build their physiques, forge their characters and help them overcome their traumas.