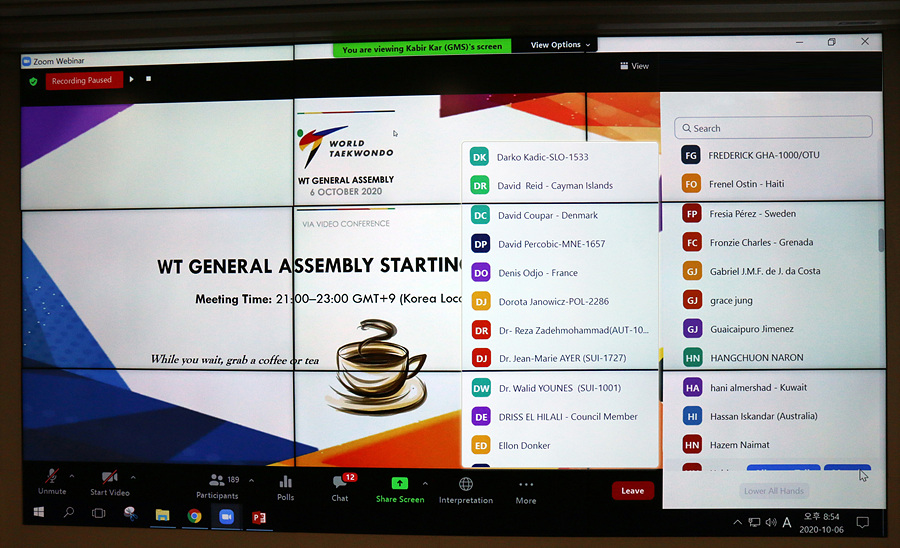 SEOUL, Korea (October 6, 2020) - World Taekwondo President Chungwon Choue, speaking at the first-ever virtual World Taekwondo General Assembly, today expressed his optimism for the sport in 2021 as he addressed the safe and simplified taekwondo competitions that will take place next year.

As well as looking forward to the Tokyo 2020 Olympic Games and Para Taekwondo’s debut at the Paralympic Games, President Choue stated that the taekwondo family can expect one of the best World Taekwondo Championships and World Para-Taekwondo Championships in Wuxi next year. The General Assembly also reviewed and published the Protocols for Safe Return to Competitions and Training during COVID-19, which will be critical in ensuring taekwondo can take place while protecting the wellbeing of its participants. 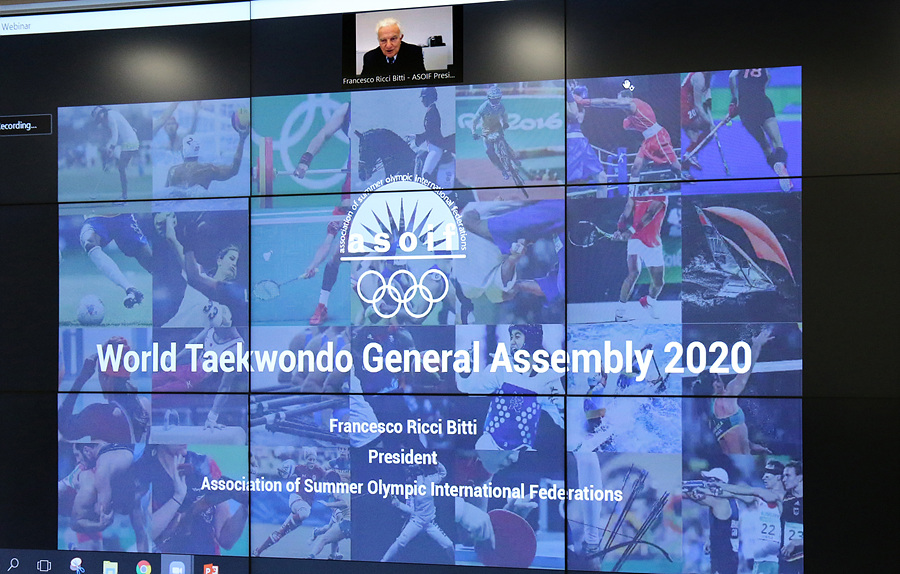 World Taekwondo’s future is also strengthened by the governance reforms that have been undertaken. Association of Summer Olympic International Federations (ASOIF) President Francesco Ricci Bitti, joined the General Assembly and praised World Taekwondo for the huge improvement it has made in good governance and how it serves as a role model for other IFs of its size. World Taekwondo moved up to the second highest grouping, A2, after the last review.

“This year has been difficult for World Taekwondo as it has for all sports. The fact that we had to host this General Assembly virtually for the first time ever is a stark reminder of how serious the global COVID-19 pandemic has become over the past six months. Despite our challenges, the taekwondo family remains united and continues to inspire. While our priority has been keeping everyone safe, we have also used this period to try and advance taekwondo and provide the best possible support for everyone. 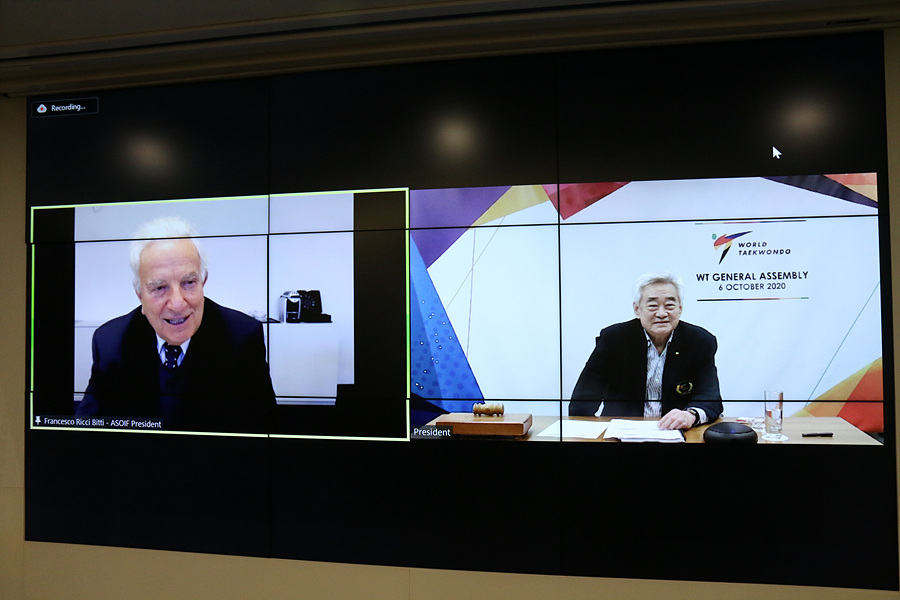 “We are optimistic for what lies ahead. We are already a well-governed International Federation, but with our collective decisions now and in the coming year, I truly believe that we can aim for the skies and be even better.”

Despite the fact that no international taekwondo events have taken place since March 2020 due to the COVID-19 pandemic, World Taekwondo has worked hard to progress. President Choue reported that the federation has organized three Council meetings, more than 80 Committee calls, and around 20 education courses for coaches, referees, educators and technical delegates, all virtually. So far, 1,000 coaches have participated in online coaching courses. Online poomsae events are also being organized in many countries and in November, World Taekwondo will organize the first Online World Taekwondo Poomsae Championships to encourage families and athletes to stay active. 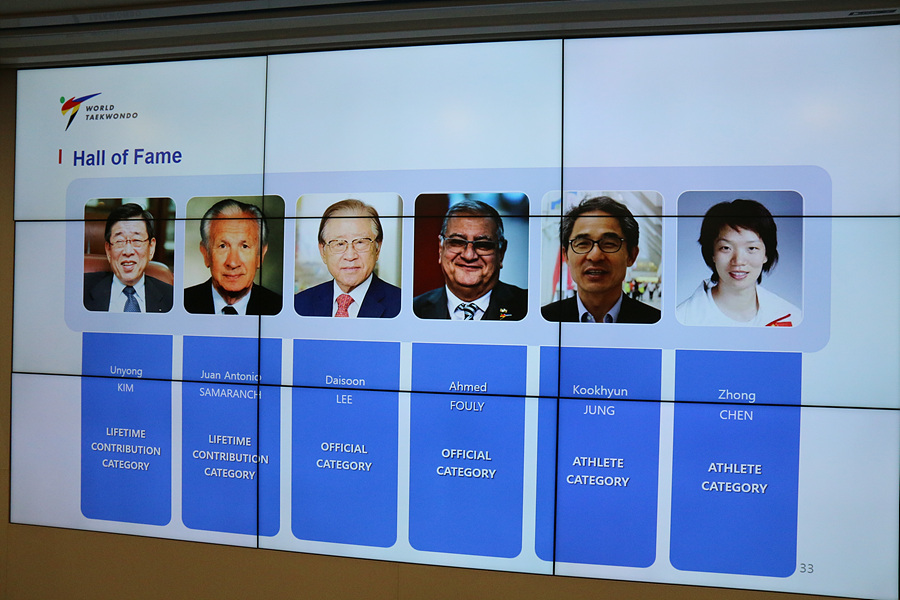 World Taekwondo has also conducted a survey of its Member National Associations (MNAs) to better understand the needs of the MNAs and how they can be better supported. 88% of the MNAs responded to the survey and the results will also be used to contribute to World Taekwondo developing a governance-based MNA Ranking, most likely in 2022. This ranking forms part of World Taekwondo’s commitment to good governance and ensuring that all members of the taekwondo family, including the MNAs, uphold high governance standards. In light of this commitment, the General Assembly also heard a status report on the World Taekwondo Integrity Unit which will centralize all integrity-related functions in the sport.

The General Assembly paid tribute to Gen. Ahmed Fouly who sadly passed away on 27 September. Gen. Fouly will be inducted into the World Taekwondo Hall of Fame.

A total of 133 MNAs and 29 Council members attended the virtual General Assembly with more than 300 participants attending in total making it the largest-ever non-elective General Assembly. 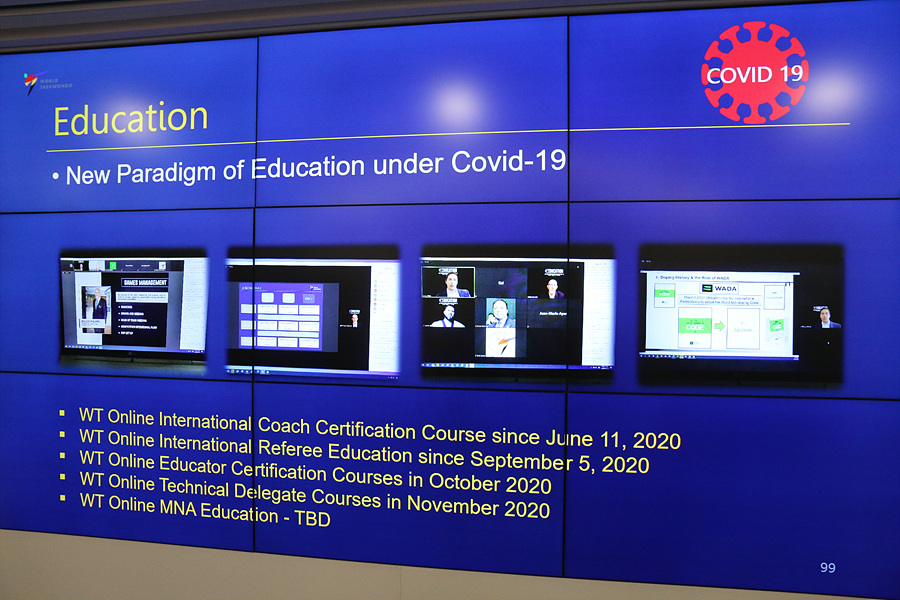 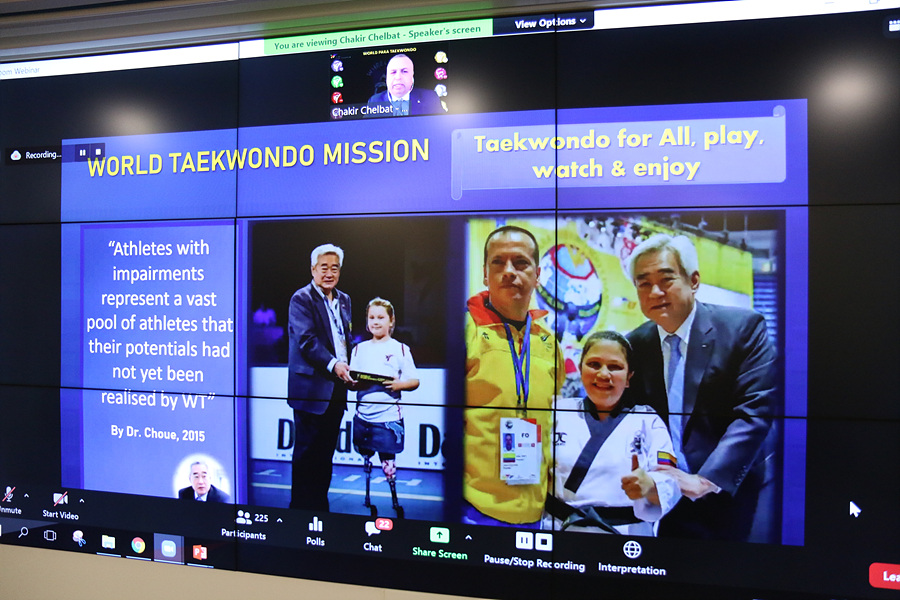