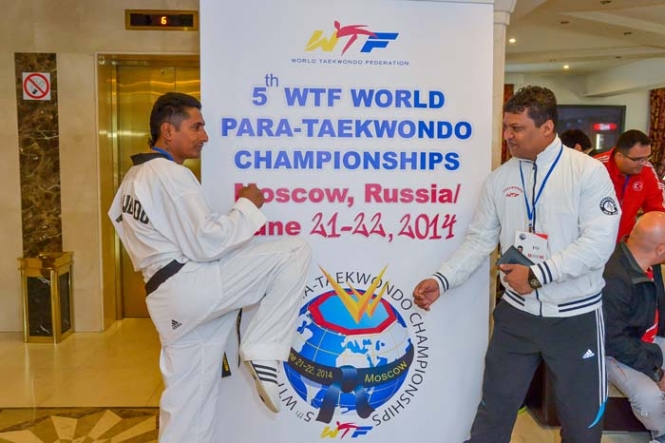 "I injured my hand, I lost two fingers in an industrial accident," said Yadav Kunwar, 41, from Nepal, recalling the incident that changed his life while working in South Korea. "When I had that accident, I felt like I lost my life."

Kunwar, a 25-year taekwondo veteran now preparing to compete in the 5th World Para-Taekwondo Championships in Moscow, Russia, recalls how devastating the blow was: For two years, nursing his mutilated hand, he did not practice.

"I heard about para-taekwondo," said the trim, long-haired athlete. "When I heard about it, I hoped for a new life in taekwondo."

Indeed, the kick-centric sport is particularly suited for those suffering from upper limb injuries. he said. "Taekwondo plays with the foot, and uses the hand to protect," he said. "I feel like I am not 100 percent, but that is no problem."

Remotivated, Kunwar dived back into his beloved sport and in 2013 grabbed a bronze in the sparring category at the 4th World Para-Taekwondo Championships held in Lausanne, Switzerland in 2013. That result made him one of Nepal's highest profile sporting heroes.

Back home in Nepal, taekwondo is well developed. It is the nation's most popular sport, and Kunwar himself is widely featured in national media. Now he is giving back to the sport as a coach, teaching the disabled around the country. In doing so, he hopes that he will no longer be a force of one.

"I am the only Nepalese athlete here," he said of the Nepalese contingent in Moscow. "Next time, there will be more."

Taekwondo, which requires neither equipment nor stadium, is well suited to Nepal, he reckons. "For taekwondo you don't need a cricket pitch, you can play it in a small room," he said. "It is very easy to play."

And Nepal's country's soaring landscapes might just be the perfect breeding ground for taekwondo athletes, Kunwar reckons. "We are lightweight, high-altitude people," he said; his countrymen's physical combination of agility and leg strength is appropriate for the high-kicking contact sport.

As he gears up for the weekend Moscow championship, he has high hopes.

"I want to get a gold here in Russia," he said. He acknowledges, however, that he is facing strong competition – particularly from the Azerbaijani, Russian and Turkish teams. But he is not daunted, and hopes to improve on his score in Lausanne. Subsequently, he hopes there may be an even bigger event.

"I want to get gold at the Paralympics," he said. "I want to be a medalist."

The International Paralympic Committee will be voting on taekwondo's inclusion in the Paralympic program in October this year or in the first quarter of next year at the latest.