In the first semi-final, double Olympic gold medalist Jade “The Welsh Wonder” Jones of Great Britain went in against Ah-reum Lee of Team Korea. After a very fighty last round, with both girls hitting the mats and Lee being run out of the area, the match was won by the Korean, 14-8. 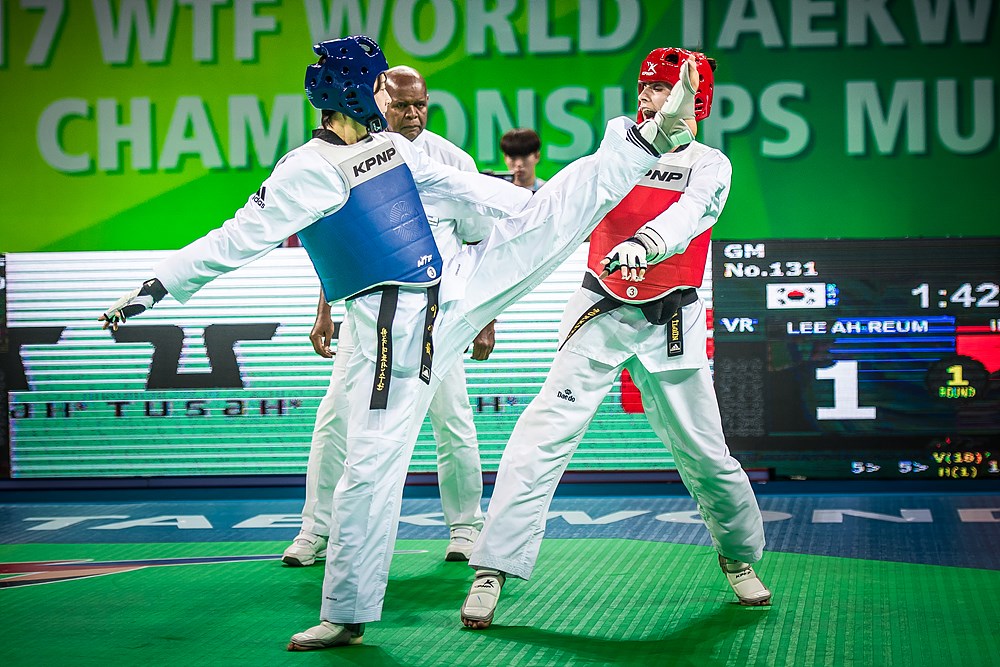 In the second semi-final, Nikita Glasnovic of Sweden took on Kubra Hatice Ilgun of Turkey. It was a one-sided affair: A dominant Ilgun, showcasing class footwork and high-altitude kicks, won 8-0.

The final pitted Lee against Ilgun. The first round went to Lee, 3-0, fighting with precision and economy and proving un-hittable. In the second, the Korean extended her lead with a perfectly placed ax kick to the face; the round ended 6-2 to Lee. The third saw a more physical game with a lot of pushing and the last 10 seconds were all-out action, but the Korean held off the onslaught and won gold 7-5.

Silver went to Ilgun, while bronzes went to Jones and Glasnovic. 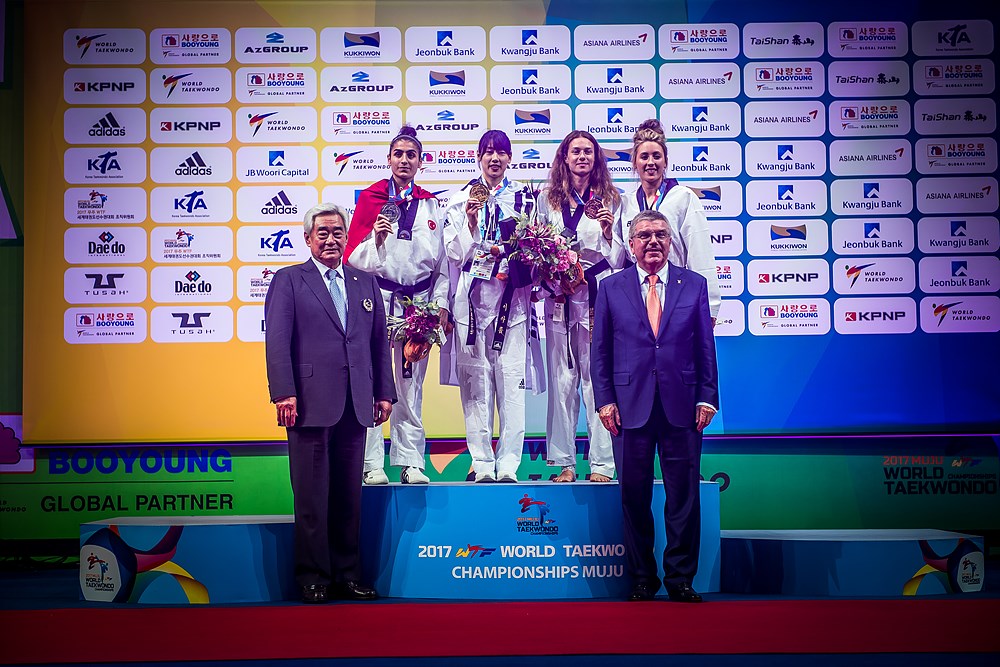 The first semi-final encounter featured up-and-comer Bradly Sinden of Great Britain -ranked 62 - against Rio 2016 gold medalist Shuai Zhao of China, ranked 18. The Brit was half a head shorter but fought a physical game against the towering Chinese  in a no-holds barred, high-scoring battle that saw penalties flying left and right and had the crowd on its feet. Zhao – sniper-accurate with head kicks - won an exhausting victory, 29-43.

The second semi-final pitted Mahammad Mammadov of Azerbaijan against Mirhashem Hosseini of Iran. Both are tall and leggy and both play similar, single-shot games. The match was won 6-5 by the Iranian. 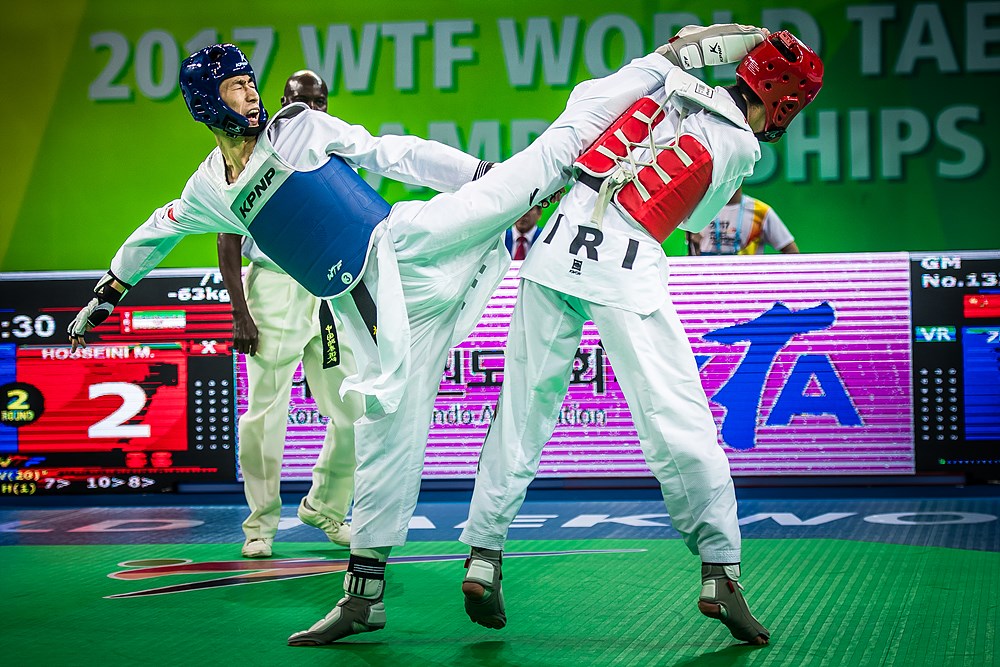 The final was a showdown between Zhao and Hosseini. Round 1 featured an athletic high kicking duel from both lanky players. Hosseini took a nasty fall but got back up. It ended 2-2. Round 2 saw more evenly matched action, but just before the buzzer, the Chinese flicked up his telescopic leg and landed a hook kick to the head, taking the lead, 5-2. The final round saw more action with the two players kicking high in both open play and from the clinch. But the Chinese proved more accurate, seizing gold, 11-5. The first semi-final saw Rio 2016 bronze medalist Ruth Gbagbi of Cote d’Ivoire go into action against So-hee Kim of Korea. With Gbagbi five points up in the first round, Kim went down in a bruising clash on the edge of the mats, her leg twisting. Clutching her knee and unable to continue, Kim fell - leaving the field to the African.

The second semi pitched the unheralded Tatiana Kuzmina of Russia against Rio 2016 bronze medalist Kimia Alizadeh Zenoorin, a heroine in her native Iran for winning her country its first-ever female Olympic medal. The Russian fought an ambidextrous fight and led in the first two rounds, but the Iranian showed her quality and came back in the third to win it, 9-6. 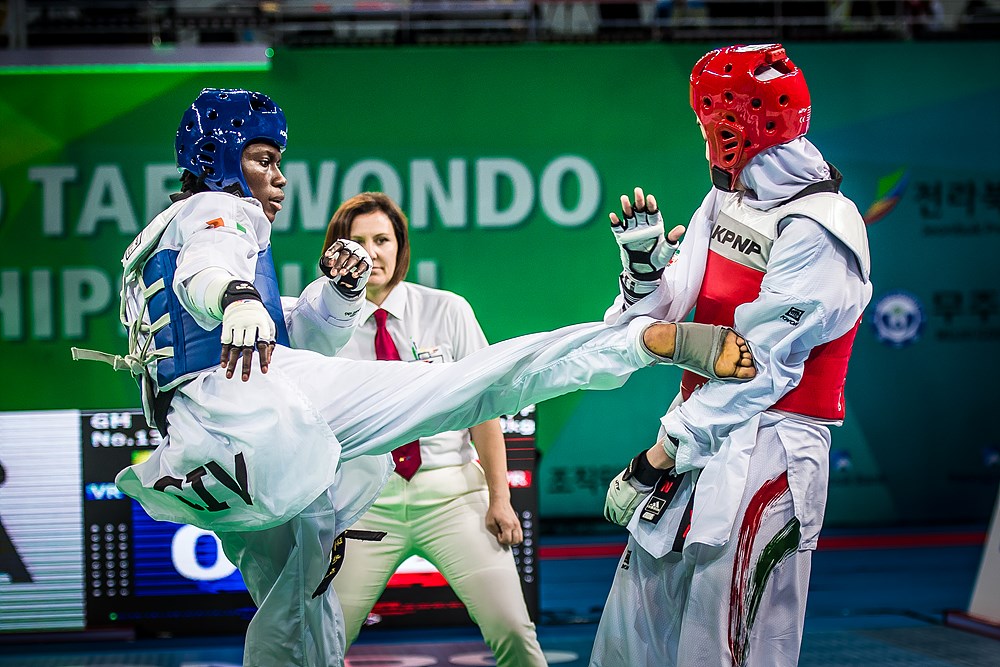 The final was a battle of styles and physiques: The powerful, combative Gbagbi and the slender, tactical Alizadeh Zenoorin. Round 1 started with the Iranian drawing first blood with a body kick, but Gbagbi looking ultra-intimidating with her forward-fighting, physical game – the impact of her kicks resounded around the stadium. The first ended 12-5 to the African. In the second, the Iranian did well to raise her score marginally in the face of relentless stabbing kicks from Gbagbi, who ended the round comfortably ahead, 15-9. In the third Alizadeh Zenoorin went on to the offensive, but to no avail: She visited the mats repeatedly as the African warrior relentlessly blasted through her defenses. It ended 19-9 – a convincing victory and a gold for Gbagbi.

Silver was won by Alizadeh Zenoorin; bronzes were taken by Kim and Kuzmina. 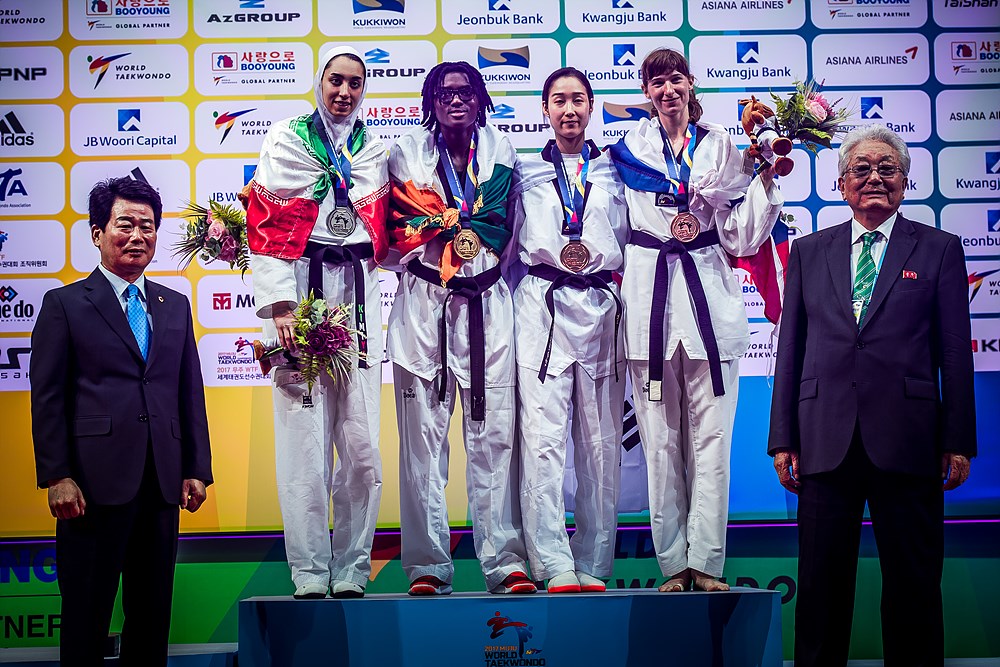 The M -80kg is arguably the most eagerly awaited contest at the championships, featuring some of the most entertaining players in the game - and the bouts did not disappoint.

The first semi saw 13th ranked Damon Sansum of Great Britain takes on 17th ranked Anton Kotkov of Russia. It was an entertaining fight, with the Brit looking the more aggressive, but with the leggy Russian unleashing some spectacular and highly technical kicks. This clean, open and enjoyable bout ended 10-10. In golden point, the Russian backed the Brit out of the area and sealed victory with a body kick.

The second semi was a highly anticipated battle between two of the greatest crowd pleasers in taekwondo, Moldova’s combative Aaron Cook and Azerbaijan’s stylish Milad Beigi Harchegani. The Azeri is a Rio 2016 bronze medalist and the 2016 Grand-Prix winner, while Cook is a former Junior World Champion. A promising fight proved one-sided: The tall Azeri was super accurate, crushing Cook with point after point as the crowd fell silent. It ended 41-5 after brilliant play by the Azeri - but a heart-breaking result for Cook, and one of the saddest bouts this writer has witnessed in taekwondo. 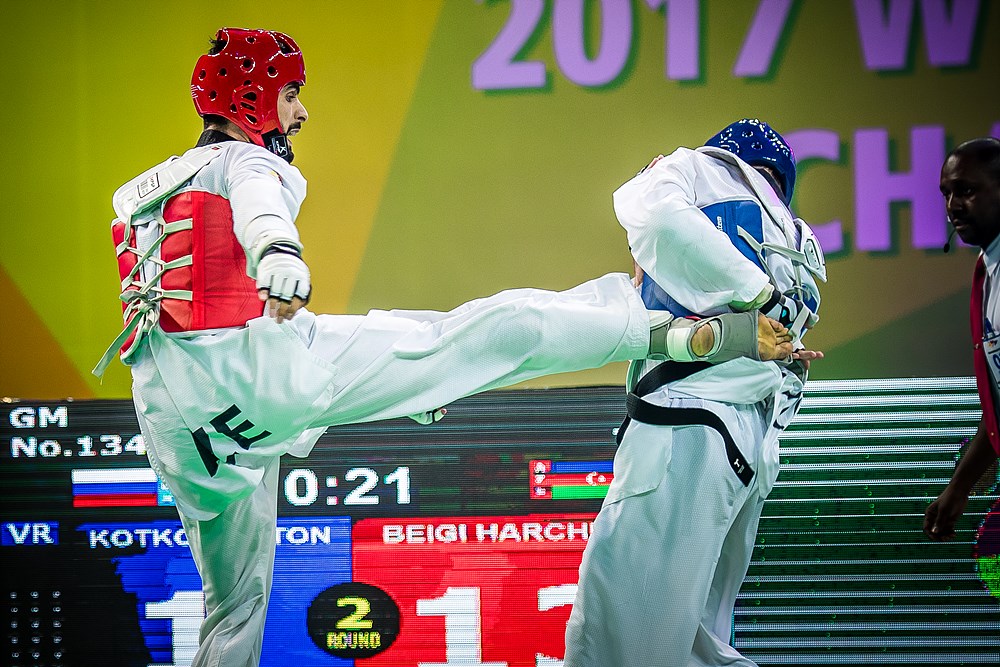 The final was Kotkov versus Beigi Harchegani. Both lads have similar tall, slim physiques but it was the deadly accurate Azeri who stamped his superiority on the match early, connecting with a face kick in a torrid flurry and ending the round 4-1.

In Round 2, the Azeri went to work plying his long, laser-guided legs and ended the second 13-1 up. In the third, Kotkov stayed game but just could not connect. With the Azeri superior in both clinch and open play, it ended 21-3. An utterly dominant performance by Beigi Harchegani - who looks unstoppable if he maintains his present form.

Silver went to Kotkov, while Sansum and Cook took home the bronzes.

The 2017 World Taekwondo Championships was the 23rd edition of the tournament, which runs every two years. With 183+1 nations participating, the 2017 championships are the largest ever, and are taking place at the Taekwondowon, the world’s largest taekwondo-dedicated training facility in Muju, in Korea’s southwest. 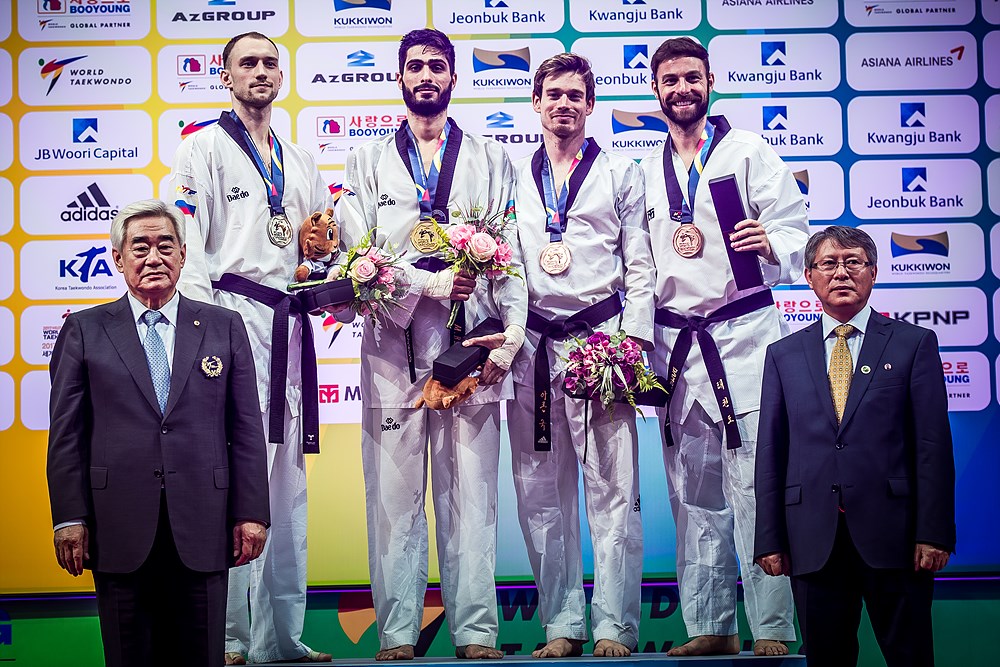