MUJU, Korea (June 28, 2017) - The gold medals on the fifth day of the 2017 World Taekwondo Championships were captured by Turkey, Korea and Great Britain as the finals of the F -53kg, the M -58kg and the F +73kg categories were contested.

Silvers were won by Russia, Russia (again) and USA, while bronzes were awarded to Uzbekistan, Latvia, Mexico, Spain, Korea and China.

In the first semi-final, European Champion Zeliha Agris of Turkey went in against Dinorahon Mamadibragimova of Uzbekistan. Agris was behind 5-1 in the first two rounds against a nimble, active and accurate opponent, but pulled some high-scoring techniques out of the bag in the third to win 11-7. 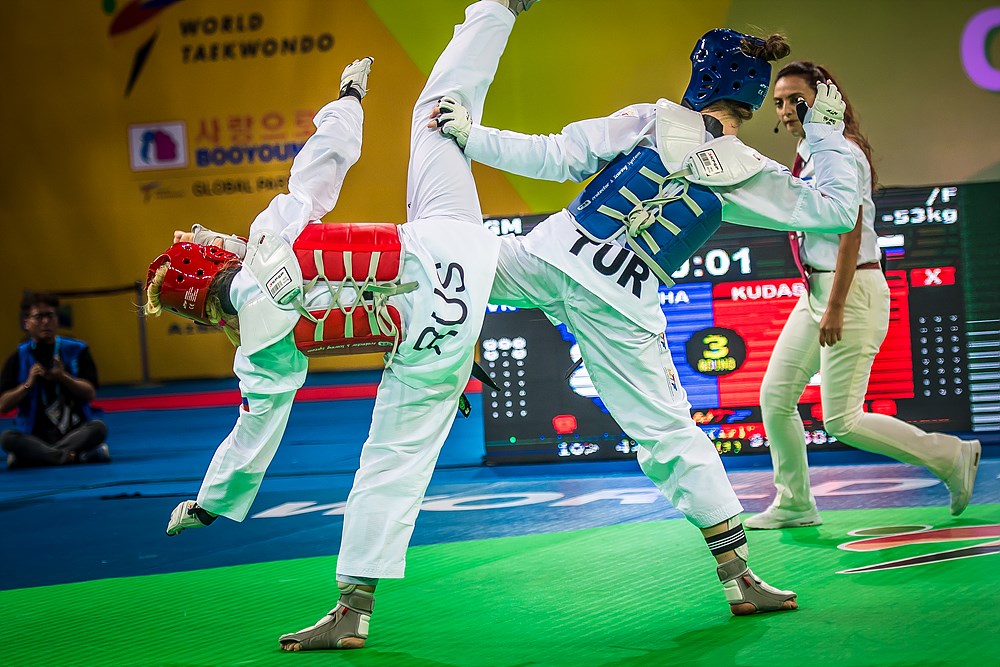 In the second semi-final, Inese Tarvida of Latvia took on Tatiana Kudashova of Russia. The two were closely matched until, in the last round, Kudashova sealed victory with a duo of head kicks, winning 11-5.

The final pitted Agris against Kudashova. Round 1 proved a cagey, tactical business which Kudashova led, 3-1. After an early clash and fall, the second continued on a similar course, with both players stabbing at each other from range, and ended with the Russian clinging to her lead, 3-2. The Turk evened the score, then the Russian landed a head kick to go 6-3 up. Then it was 7-6 to the Turk after a head kick she delivered on the edge of the mats. The Russian went onto the offensive. She was two points down but evened the board to 8-8. With the final seconds counting down, it looked like golden point – then the Turk connected to the head in the very last second, winning an 11-8 victory. A brilliantly timed piece of under-pressure play by Agris. 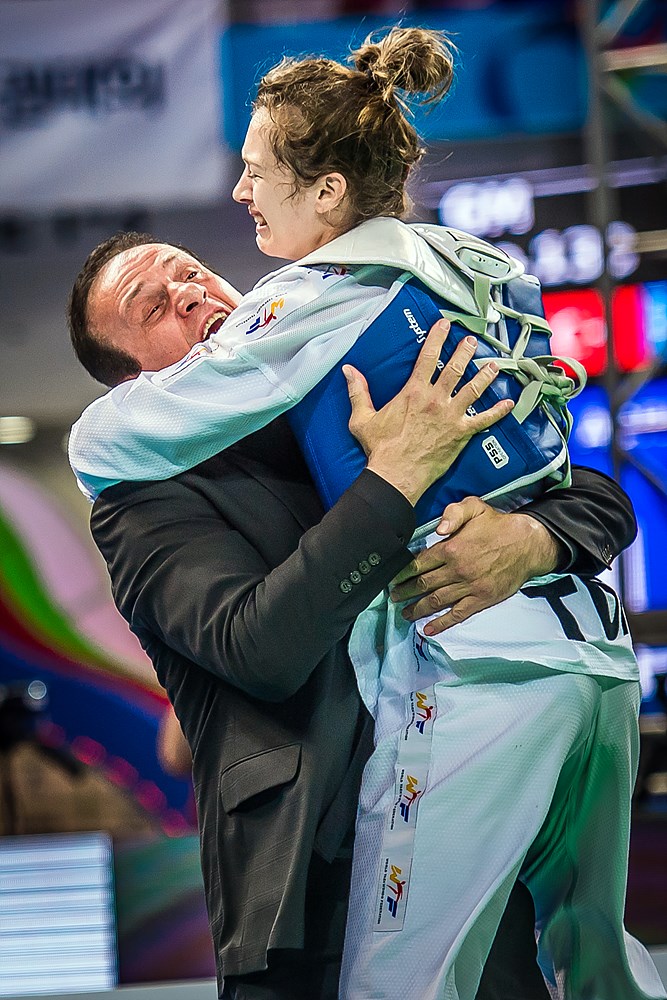 The second semi-final pitted Jesus Tortosa Cabrera of Spain against Mikhail Artamonov of Russia. The Russian won a hard-fought match that featured equal amounts of close-in push action and high-altitude kicking from both players but ended 25-15 to the Russian after his opponent amassed 10 penalties. 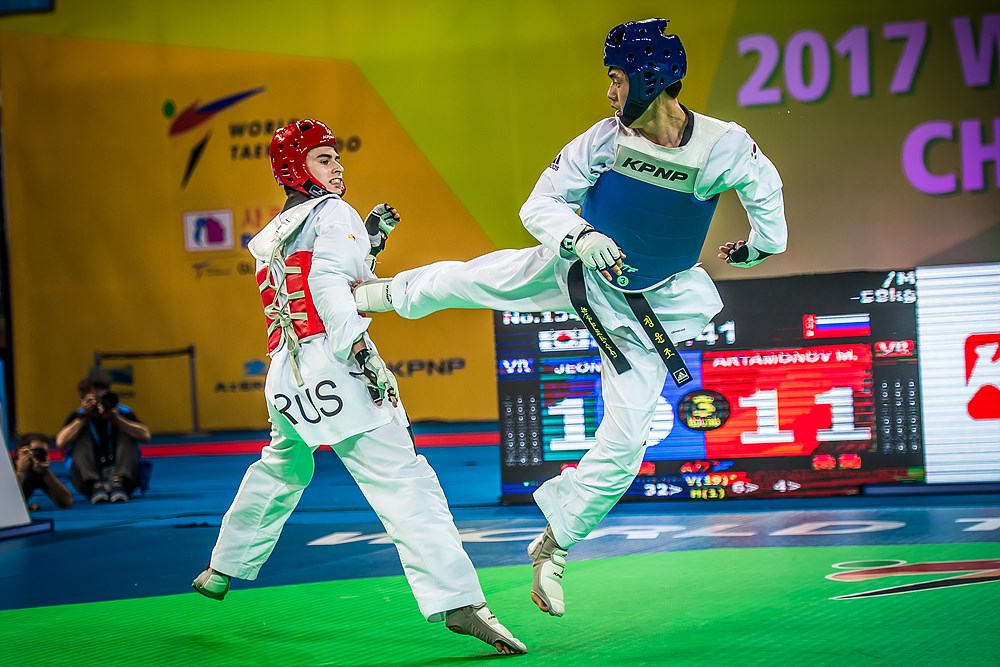 The title match between Jeong and Artamonov promised excellence – and delivered. The game started fast, with the Korean going onto the offensive and both fighters exchanging kicks at all angles and engaging in high-energy pushing. In quick succession, the Korean landed two arcing head kicks form close range, igniting roars from the hometown crowd. But the Russian came back, and the first rounded ended 9-7 to Jeong. In the second, Jeong fought aggressively in the push range and although the Russian looked dangerous with head kicks, it was Jeong who continued to batter Artamonov’s head protector, ending the round 17-11 up. The crowd applauded as the fighters came out for the final round of this tremendous match. Jeong’s kicks looked faster than ever, but the Russian still had plenty of juice and landed head kicks of his own. In the last four seconds it was 24-23 – then the bell rang on a proud victory for Jeong. 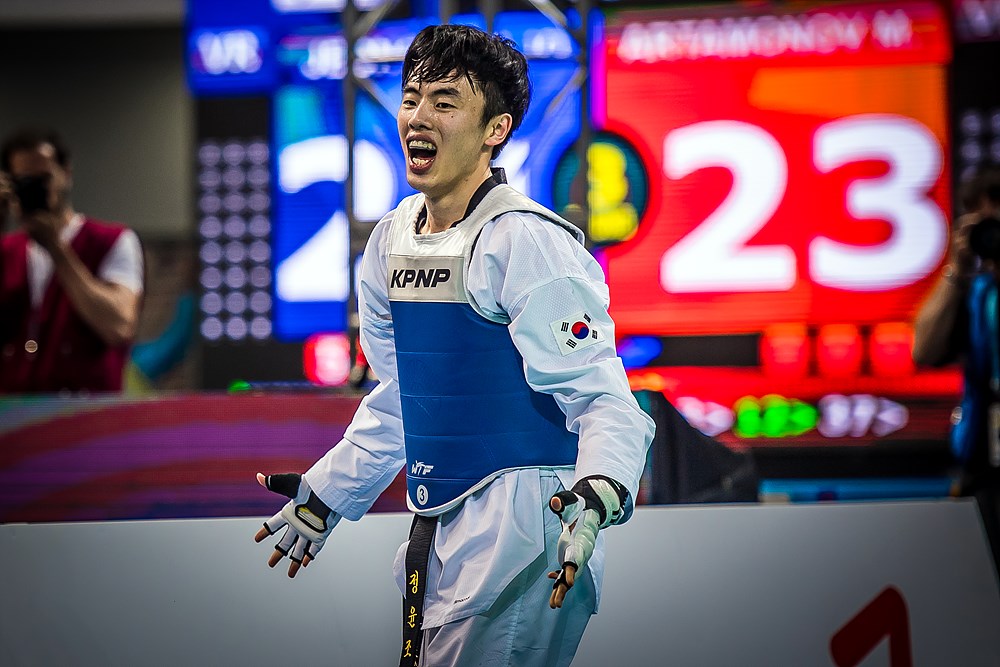 In the first semi-final, defending World Champion Bianca “Queen Bee” Walkden was matched against Sae-bom An of Korea. In a very physical match, the champion delivered a professional performance for a 9-3 victory. In the second semi-final, Jackie Galloway of USA took on 2016 Olympic gold medalist Shuyin Zheng of China. Galloway used plenty footwork and some rough tactics against the Chinese ‘tallkwondo” fighter, winning 4-3. 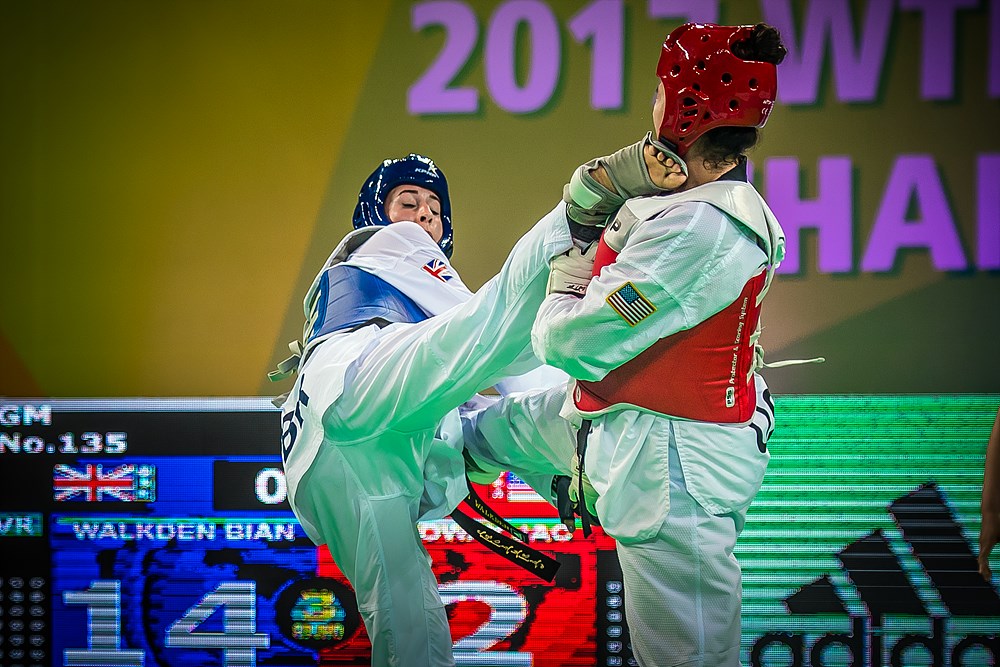 The final was a showdown between Walkden and Galloway. The champ scored right off the opening buzzer with a lightning round kick to the body. Both players were using lots of footwork - very active for heavyweights - but it was Walkden who was controlling the center of the ring. The first ended 3-0 to Walkden. In Round 2, Galloway was mobile but Walkden picked her shots and her laser-like accuracy extended her lead to 10-0. In the third, Walkden kept stabbing away with her side kick; Galloway simply could not break through into the contact range. The American tried to fight forward, but Walkden controlled the distance and danced away from Galloway’s offensive. It ended 14-4. A masterly performance by “Queen Bee,” who kept her crown and never looked in any danger – and who, in the medal ceremony, won a special award: A smooch from her beau, Moldova’s Aaron Cook.

Silver was won by Galloway while An and Zhang took home the bronzes. 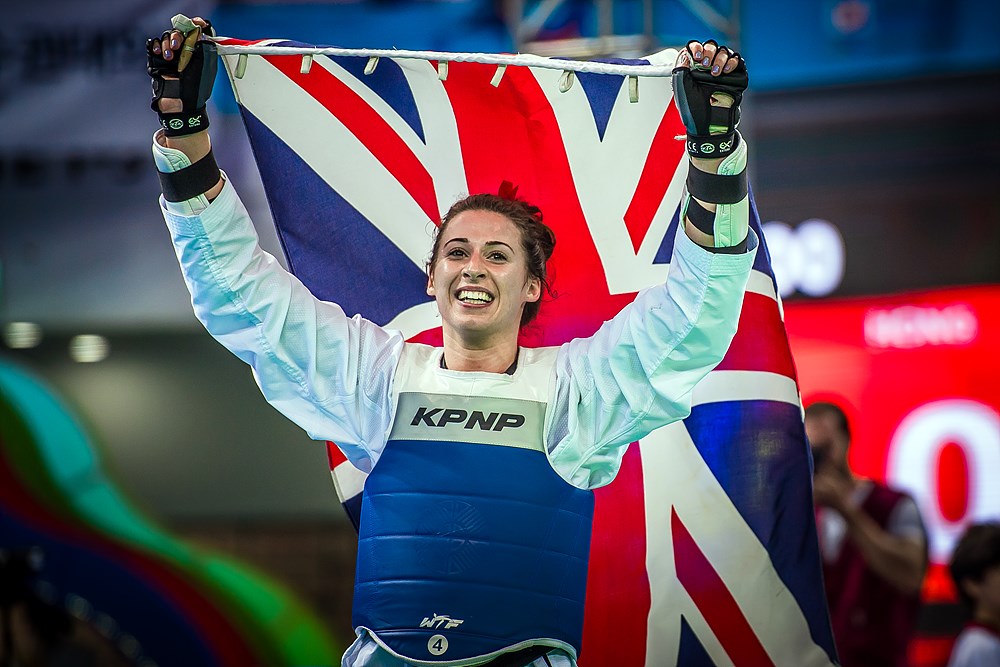 Action recommences tomorrow with the preliminaries of the M-63kg and the F-57kg categories, and the finals of the M -87kg, M +87kg and F-73kg. 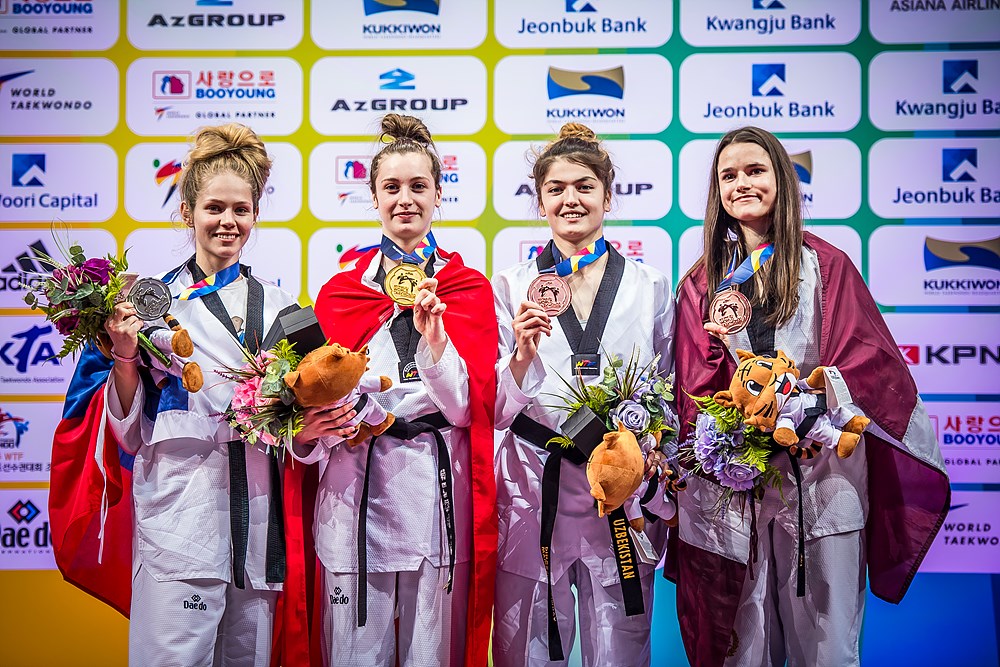 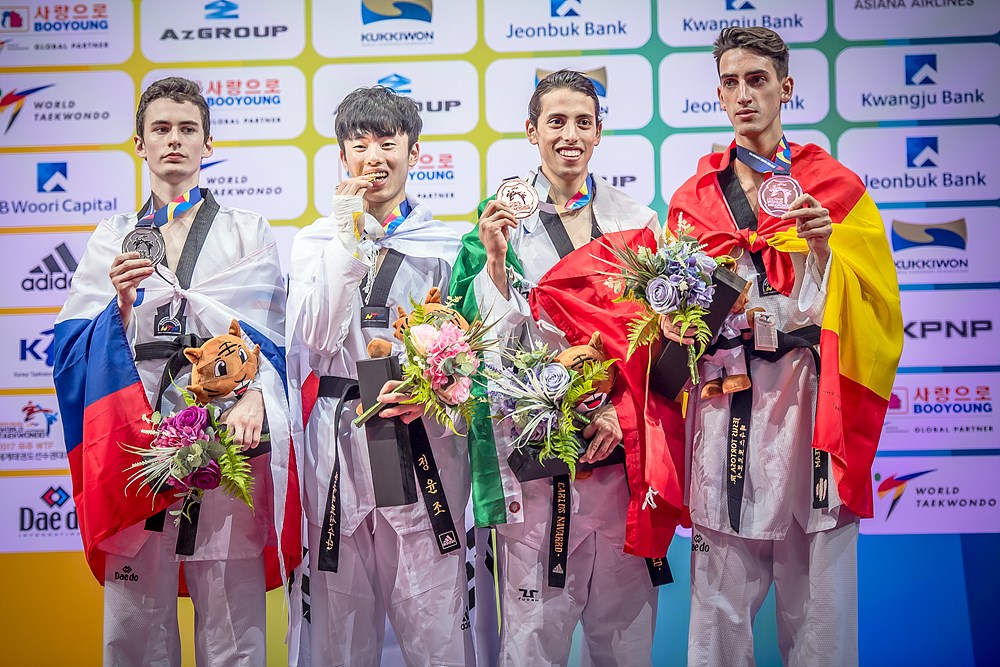 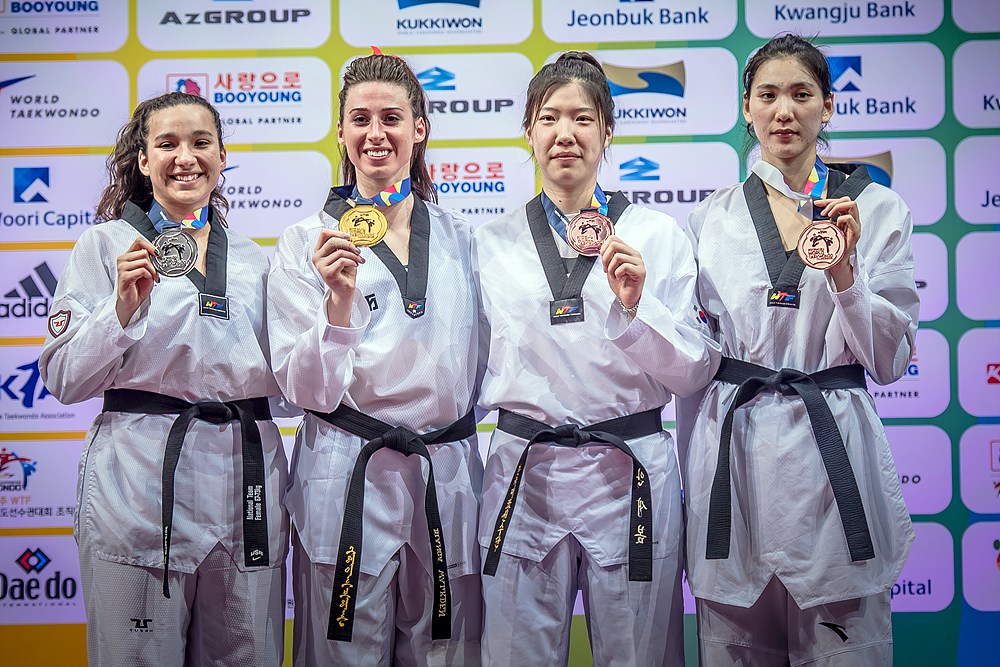