BAKU, Azerbaijan (Dec. 13, 2016) – Defending champions China and Azerbaijan retained their titles in, respectively, the female and male divisions of the 2016 World Taekwondo Team Championships at the Sarhadchi Sports Olympic Center in Azerbaijan’s capital, while Korea took gold in the new mixed gender divisions. 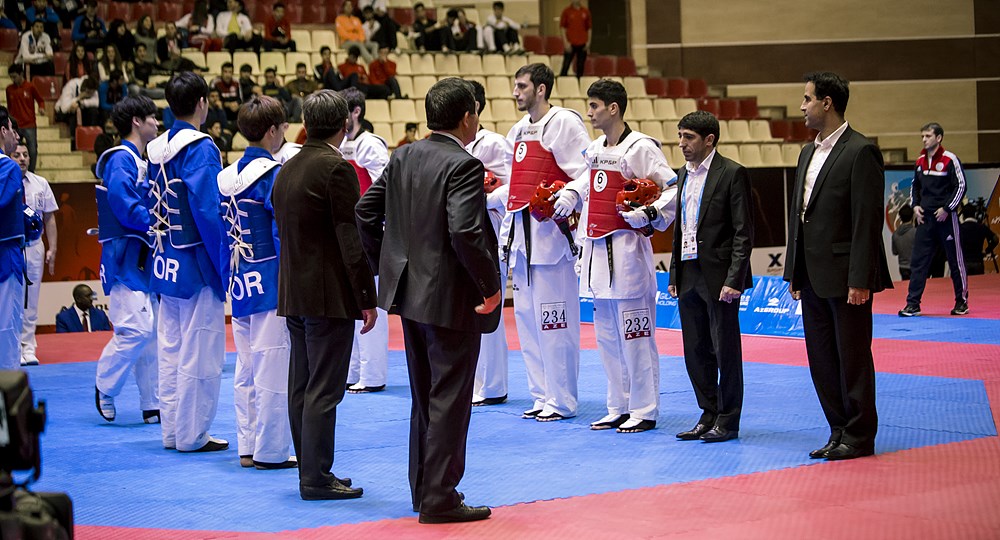 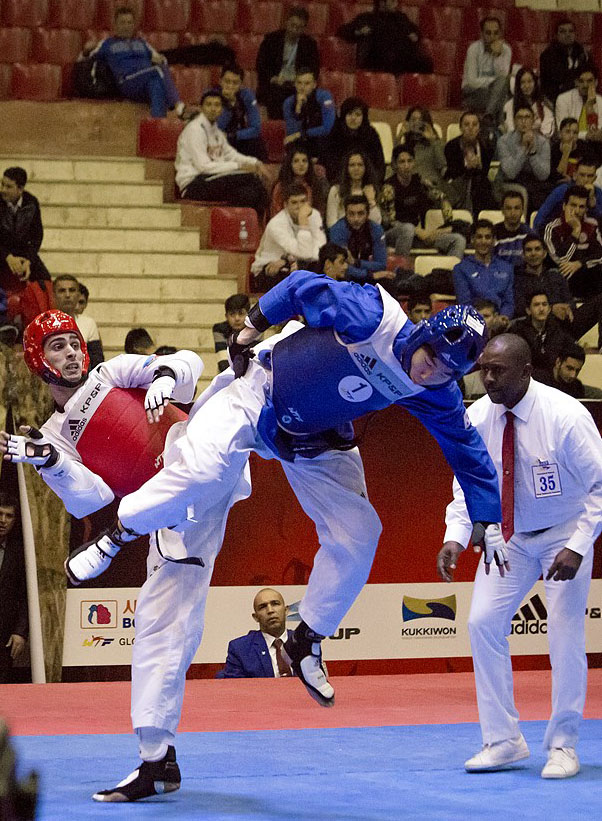 The team championships are taekwondo’s fastest, most furious competitive format. As a “battle of the nations” the team competition - with its pre-battle huddles, verbal encouragement and group victory celebrations – customarily ignites far greater spectator emotion than the slower-paced, more tactical individual game.

The first round is a counterpart-versus-counterpart format, with the five team members, from lightest to heaviest, each fighting their opposite number. Te tempo accelerates in the second and third rounds, fought under a tag-team format: Fighters explode across the mats in a series of rapid-fire substitutions, generating a whirlwind spectacle of all-out-attack taekwondo.

In the female category, 2015 defending champions China took on Korea. Unlike bouts earlier in the day, the first round was slow-paced, with the two teams looking well matched, though China had a height advantage. The last (i.e. the heaviest) player on Team China was 2016 Olympic gold medalist Shuyin Zheng, a towering fighter with a tight defense and a spear-like front leg. Round 1 ended 1-1. 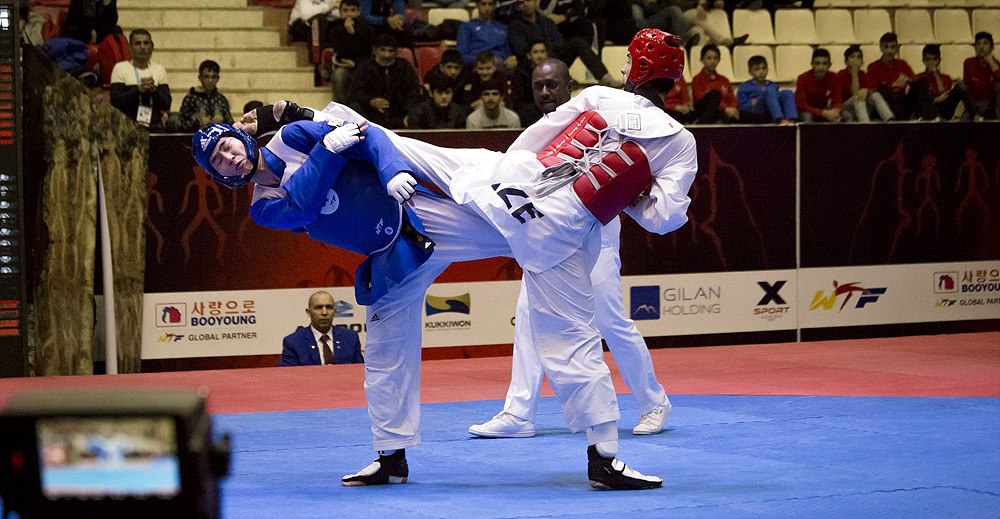 The second round inaugurated the high-tempo tag-team format. The pace picked up. Korea went 2-1 up, then China played Zheng - to no avail: The score stated the same. Her substitute picked up a point to take the board to 2-2. These two elite teams were literally negating each other, in contrast to the pyrotechnics both had detonated earlier in the competition. In the last seconds, China fond the range, ending the round 4-2 up.

But the championship title was still in play as Round 3 got underway. China extended its lead with some crafty twisting leg play to go to 5-2. Korea started playing with more urgency, grabbing a point for 5-3. Now the substitutions were coming thick and fast from both coaches with Zheng being bought into play, plying her ax kick. Korea attacked with punches – no score. Then Korea won one back, 5-4. China quickly grabbed another 6-4. Zheng was played again in the last seconds. The score ended 6-4 with victory for Team China - who hugged their coach in delight.

In the male category, Team Korea was fielding a fast, high-scoring team which had earlier eviscerated Belgium, winning by 30-point gap. As in the female category, the Korean lads found themselves facing off against the defending champion. The Azeri homeboys fielded the tallest team in the competition - based around the awesome cadre of Olympic gold medal heavyweight Radik Isaev and the phenomenal Milad Beigi Harchegani. The Azeris were formidable: They had earlier knocked Turkey out by 30 point difference, delighting the crowd. 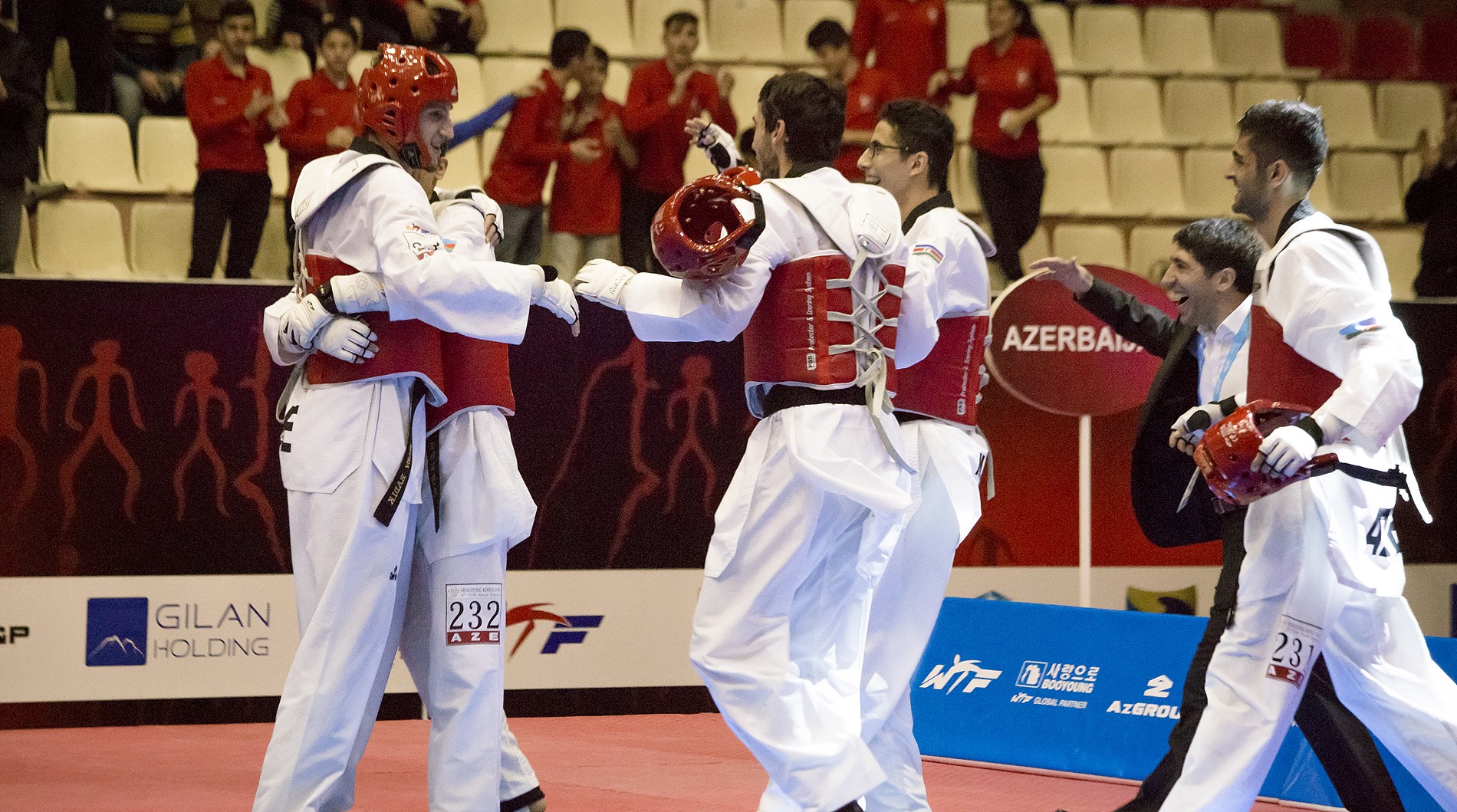 In the preliminary round, Korea had to grab some points before the substitution rounds, when Beigi Harchegani and Isaev would be given full play. However, Round 1 proved even-handed, with the score ending 1-0 thanks to a kick from a relaxed-looking Beigi Harchegani. As in the female final, it had been a disappointing feeling-out round.

The action heated up in Round 2 with a game Korean opponent whirling in against Isaev – and scoring from in-close on the Azeri giant. Isaev was swiftly substituted; the board was 1-1. A head shot from the Azeris took the board to 4-1, then Beigi Harchegani reappeared, exercising his front leg with dangerous-looking kicks and the crowd raising the roof, chanting “Mi-lad! Mi-lad!” Isaev came back on and landed, taking the score to go 5-1. The Koreans were looking increasing disadvantaged by the big Azeri boys. The second ended 6-1.

In Round 3, the match could have gone either way, but the decimation of Team Korea began when Beigi Harchegani landed a round kick to the head:  9-1. Isaev - who had looked frustrated earlier - now seemed to be enjoying himself. Beigi Harchegani came on again, and raised the local score to 12-1. Korea managed one point 12-2, but seemed unable to breaking through the Azeri defenses with the higher scoring techniques they need. Again, Beigi Harchegani landed a crescent kick in the clinch to take the score to 15-3. Isaev came back on and the board climbed to 16-3, then 16-4. Beigi Harchegani scored to the body 17-4 and dropped his man, then he was up to 18-4.

Now the Azeris were on fire, taking the board to 19, then 20. One Azeri player signaled furiously to his coach to keep him on the mats, as Harchegni was played yet again. In the last 30 seconds, the score was 21-5. With a series of spinning back kicks, Korea tried to land a big technique, but Isaev came on to control the match to the end. The final score was 21-5 to Azerbaijan. It had been a brave performance by Korea, but the Azeri Team looks unstoppable in this format.

Considerable curiosity surrounded the new mixed-gender format. In this, being tried for the first time at the World Team Championships, three male and two female players compete as a team – though the combats are only male-male and female-female; there is no mixed-gender fighting.

Thus, the only real difference between mixed gender and regular team competition is that if a player from Team A is fighting well, Team B can force that player off the mats by substituting a player of the opposite gender: As there is no mixed-gender fighting, the player from Team A also has to leave the floor. This adds another tactical nuance to the game - one used to good effect by Team Russia, which used it to remove the dangerous Jackie Galloway from the mats in the last half minute of the semi-final clash.

Four teams – Belgium, Korea, Russia and USA – were in contention in the experimental format.

In the finals, a fresher Team Korea faced Team Russia, which had just a five-minute break after their semifinal victory over Team USA. Both teams were fielding young guns rather than established, name players; neither team had a clear height advantage.

The first round started at a face pace; Korea went 3-1 up with a jumping ax kick but Russia won a point back after Korea was penalized for grabbing. Korea raised their score with body kicks, ending the round 6-3. There were some fast substitutions as the tag-team segment got underway. The Russians seemed to be getting their game on, and raising the board to 4-6. The action was rough, with Korean players visiting the mats. Round 2 ended 5-6: Team Korea had not scored a single point.

So, there was everything to play for going into the third. It started with fierce combat, the Russian fighters looking slightly better conditioned than their opponents, and with Yulia Miyuts proving a tower of strength for the Russian team as she had in the semi-finals: She evened the score 6-6. But now Team Korea showed its quality, scoring with greater kick accuracy, going to 7-6, then to 8-6. A monkey kick scored one point for Russia - but was immediately disallowed. In the last 10 seconds Korea substituted and ended it with a score of 9-7 after a very evenly fought match.

The medal ceremony ended five days of taekwondo action in the Baku capital. It also dropped the curtain on the 2016 fighting season. January is a rest month for WTF athletes, so action will resume in February, as the sport’s elite fighters gear up for the top fixture of 2017, the World Championships in Muju, Korea, in June.