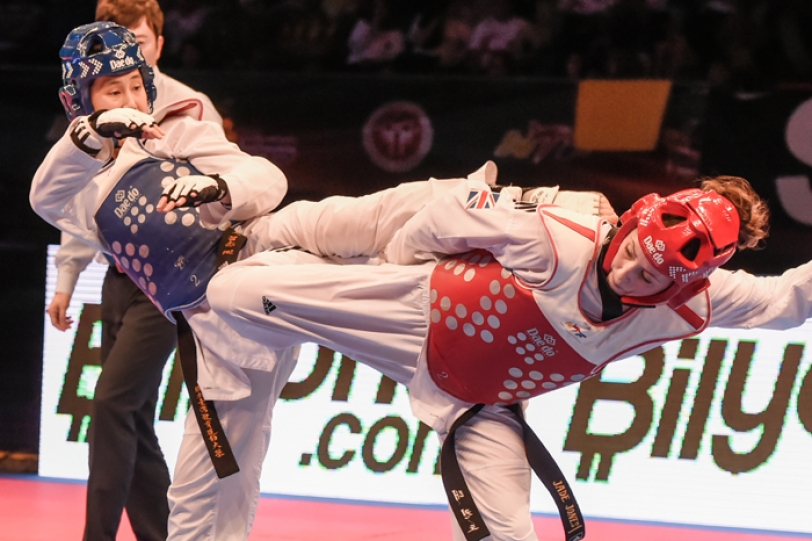 In the finals of the female -57kg category, Great Britain’s Jade Jones squared off against Chinese Taipei’s Yun-wen Huang.

The match started with Jones – who had been looking razor-sharp in the preliminaries and the semis – fighting forward and pressuring the Chinese girl backward, forcing her to employ some evasive footwork. Jones drew first blood with a body kick and was varying her front-leg attack both high and low. She grabbed another point during a scrappy edge-of-mats exchange; it was deducted for holding, but she soon racked up another point, ending the round 2-0.

In Round 2, both girls battled for the center of the mats, in tight, front-leg exchanges with Jones extending her lead with another side kick to the torso. Another Jones side kick connected. It failed to score on the PSS, but won her a point as it dumped Huang on the deck. After grabbing another point, the British girl ended the second round comfortably ahead 5-0.

Huang came out aggressively in the third, trying to force Jones onto her back leg and off the mats, but Jones was unintimidated, replying with head and body shots, racking up another point with yet another strong side kick to the body. Huang finally found an angle that bypassed Jones’ defense during a flurry on the edge of the mats, taking the board to 6-1, then 6-2. The Chinese girl gamely unleashed head shots and hammering side kicks, but Jones was unwilling to give up ground, and the fight went to close quarters. A beautifully timed side push kick dropped Huang, but did not score. Huang pressured Jones out of the area, taking her score to three points, but Jones had timed things perfectly, taking the match and the gold with a comfortable 6-3 victory.

Great Britain’s Rachelle Booth and Sweden’s Nikita Glasnovic had to settle for bronzes in the category.

In the finals of the men’s -68kg category, Saul Gutierrez of Mexico did battle with Russia’s Alexey Denisenko.

The action started with Denisenko adopting a low, give-no-ground stance while Gutierrez danced on the balls of his feet. Both men stabbed at each other’s bodies with jab kicks, but it was the Mexican who landed first. The score rose 2-1 to Gutierrez when, in the closing seconds, he landed a hooking heel kick to the back of the Russian’s head. Denisenko shot back with a wicked combination – a mid-level round kick and a second round kick off the other leg to the head – bringing the scoreboard to 4-5 in the Mexican’s favor.

Round 2 started with both men looking more aggressive, Denisenko firing his patented one-two, front leg-back leg round kick serial attack.The Russian went for an ax kick,Gutierrez came forward and Denisenko landed on the mats, taking the board to 6-4.  Thus far, it had been the Mexican setting the tempo, but now Denisenko switched up a gear: A picture-perfect step side kick that staggered Gutierrez won him another point, 5-6, then he leveled the score to six points each. With his target radar now locked onto the Mexican, he impacted with a round kick to the head, putting him ahead 9-6. Gutierrez was warned for holding, giving Denisenko a 10-6 point lead at the end of the second.

At the opening of the third round, Gutierrez launched a crafty kick to the body then hooked his heel up to the Russian’s face in a fine display of timing and dexterity, bringing the board to 9-10. But Denisenko was not about to relinquish his lead and scored again, for 11-9.  In a clinch, he landed a counter kick for 12 points and the Russian supporters - sniffing victory - began cheering. Densinko was now fully in game-on mode,dropping his opponent with a high side kick.

With just 15 seconds remaining, the Mexican upped the volume of his attack, winning another point, but the match was in its dying seconds. Gutierrez’s coach clawed back some breathing space by appealing;it was rejected. Three seconds now remained on the clock. Gutierrez hurtled forward, backing Denisenko out of the ring for a point. Then, as combat restarted and Gutierrez lunged into a last-ditch charge, the buzzer sounded, delivering a 12-11 victory to the Russian.

A total of 232 athletes from 50 countries competed at the Yasar Dogu Spor Salonu for top honors in the Suzhou Grand Prix event, while 50 international referees officiated at the event.