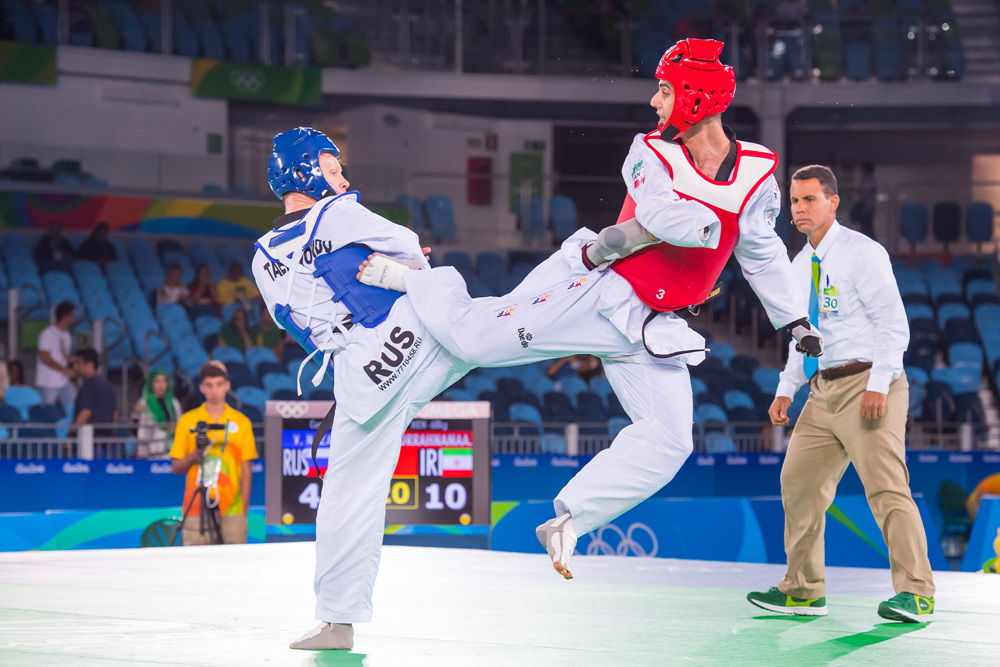 (September 19, 2016) - When you are an elite, superbly trained taekwondo fighter, it is no easy thing to watch your countrymen and countrywomen march into the arena of the greatest sporting show on earth to do battle for medals - knowing that there are none on offer for you.

That was the experience of Iran’s Mahdi Pourrahnama, a world-class taekwondo player and three-time world champion who sat out the entire four-day Olympic taekwondo competition without winning a single point for Iran.

Why so? Pourrahnama is not a regular taekwondo athlete: He is a para-athlete.

A native of Anzali Port in Iran, his disability was congenital: He was born without a right hand. But even at a young age he had a competitive spirit. Naturally, he looked to sport. “My father was a pro boxer and he knew that I had to choose a sport with the feet, so it was between football and taekwondo,” he said. “My father had done a martial art – boxing – and I was not so good at football, so I chose taekwondo.”

Pourrahnama started taekwondo at age seven, discovered he had a talent, and persevered. Now aged 21, and both an athlete and a student of psychology, he holds a third-dan black belt. As the current number-one ranked fighter in the K44 classification globally he was invited to Rio by the WTF to perform a para-taekwondo demonstration match against arch-rival and number-two seed Vitali Nazarenko of Russia.

The two para-warriors – who, incidentally, are good friends off the mats – delivered an impressive display. After three-rounds of action, the high-scoring bout was won by Pourrahnama, 15-6.

But the combat the two fighters had fought so hard in played to a largely empty stadium. “There were not too many people, as it was before the repechage,” Pourrahnama said. “If it has been before the finals, it would have been great!”

The Iranian was devastated by the lack of attention - both in Rio and back at home in taekwondo-crazy Iran. “I was so sad: Even in Iran, they did not show it on TV,” he said. “Everybody in Iran – my family and friends and college friend - wanted to watch, but they could not.”

It was, he reflected, a missed opportunity. “You know, this competition yesterday was so important because it was something like an advertisement for para-taekwondo around the world,” he said. ”Unfortunately, the advertisement was not that good.”

Even so, the 2016 Olympics was a positive experience. “The Olympics was a good experience for me,” he said. “But I was hoping for more medals!” Indeed, the shock failure of the three Iranian male athletes – all powerful prospects in their respective weight categories – to win medals was the talk of the taekwondo pundits during the games.

But there was a consolation: The bronze medal seized by Kimia Alizadeh Zenoorin, an earth-shaking victory given that she was the first Iranian female to win any Olympic medal in any discipline, ever. “Now, there are lots of pictures of Kimia in Iranian media, lots of pictures of her up in Tehran,” Pourrahnama said. “Lots of celebrities and actors want to meet her.”

And he takes pride in the skills he and Nazarenko showcased. “Disability versus disability, able versus able,” he mused. “I think our competition was more exciting than some of the Olympic competitors. “

He is convinced that - in taekwondo at least - para-athletes are the equal, if not the better, of their able-bodied counterparts.

“You know, lots of people think para-taekwondo is easy, but it is not easy!” he said. “We don’t have head shots, so all the kicks are on the trunk protectors and that makes it more difficult than regular taekwondo.”

The good news is he and Nazarenko will not be sitting on the sidelines in 2020. That year, they will likely face each other again, when para-taekwondo makes its Paralympic debut in Tokyo.

“In four years, lots of things can happen -being tired, being exhausted, being sick of taekwondo, these sorts of things,” he said. “But I am first ranking, and I would like to be in Tokyo.”

Tokyo 2020 could prove to be a massive shot in the arm, not just for para-taekwondo, but for disabled children, teens and their parents across the world, he hoped.

“Lots of kids are born with disabilities and, you know, their fathers and mothers cry after their children are born,” he said. “If they know about this, maybe they can have big hopes: ‘Sometime, I can come and play at the Olympic Games.’”