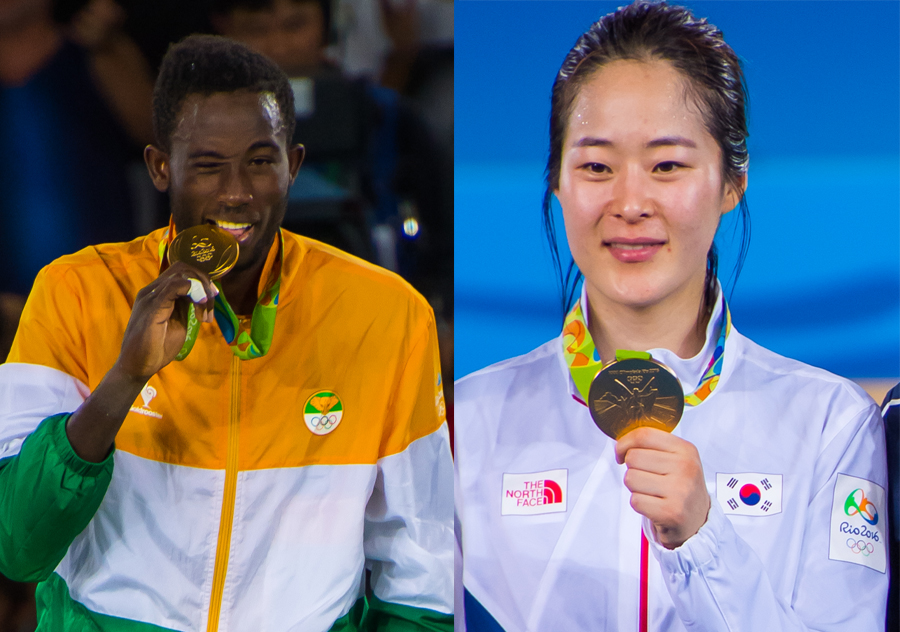 In the women -67kg category, gold went to Hyeri Oh of South Korea, silver went to Haby Niare of France and bronzes were won by Ruth Marie Christelle Gbagbi of Cote d’Ivoire and Nur Tatar of Turkey. In the men -80kg category, gold was seized by Cheick Sallah Junior Cisse of Cote d’Ivoire, silver went to Lutalo Muhammad of Great Britain and bronzes were won by Oussama Oueslati of Tunisia and Milad Beigi Harchegani of Azerbaijan.

The sonic backdrop for the on-mat battles throughout the day’s fighting had been appropriate: The near-capacity crowd raised the roof of Carioca Arena 3 with the thunderous refrain from White Stripes’ “Seven Nation Army,” and even held up lit cellphones to accompany the tune.

Day 3 was not as strewn with historic landmarks as Day 2 and did not see nearly as many shocks as Day 1. Even so, there were upsets.

Number two seed Aaron Cook of Moldova, one of the most crowd-pleasing fighters in taekwondo, was eliminated in his first fight by Liu Wei-ting of Chinese Taipei. And number one seed Mahdi Khodabakhshi went out in the second round at the feet of Azerbaijan’s Milad Beigi Harchegani. Remarkably, both these top-grade fighters were defeated on 12-point difference.

Even so, it is the finals in both categories that are likely to be talked about for a long time to come.

The final saw number one seed Haby “The Abigator” Niare of France face off against sixth seed Hyeri Oh of South Korea. In the first round, Niare landed her trademark “scorpion kick” – a heel hook kick fired from impossibly close range, requiring great balance and flexibility – to the back of Oh’s head, for a three-point lead. She extended it in the second, going 4-0 up - then things changed radically. Oh returned fire with a spin back kick, taking the board to 4-3. Then, in a too-quick-to-follow flurry of kicks, the board flashed. Oh went on the attack and started pressuring the taller French fighter back ward. In the third, both fighters tried to feint each other out before Niare appeared to land another scorpion kick – it registered but was disallowed and a video replay appeal was lost. An ax kick attack bought Niare’s score back up, before Oh added another single point - then the action mingled fast-and-furious with close-and-messy as both athletes went for broke with the scoreboard flashing the points like a pinball game and the referee working as hard as the fighters. The final result could have gone either way, but it ended with a tight 13-12 victory for Oh.

“In some competitions, I came second best and felt like I had let a lot of people down,” the Korean said after the match. “But just like any other day, today I tried my best and the result was satisfactory.”

The first bronze-medal match pitted 10th seed Farida Azizova of Azerbaijan against Gbagbi. Gbagbi, one of the fiercest fighters in the category, rang the Azeri’s bell with a perfectly timed round kick to the head in Round 1 for a three-point lead, and retained the initiative for the rest of the match, taking a deserved bronze, 7-1.

The second bronze match saw fourth-seed Nur Tatar of Turkey take on Chuang - both highly experienced competitors. In the first, an exuberant-looking Chuang landed an arcing round kick to Tatar’s head to establish a 3-0 lead; that score was unchanged in the second.  But Tatar was not to be counted out. She revived in the third, over-turning the score to 4-3, then 7-3. When it ended, the Turk looked almost unbelieving, kneeling on the field of play as if to give thanks to Providence for the victory.

The final saw Cote d’Ivoire’s Cheick Sallah Junior Cisse going into battle against Great Britain’s Lutalo Muhammad – a match that is likely to be talked about for years for its extraordinary ending.

The African started with one advantage. Cisse has proven to be the most popular fighter with the Rio crowd, taking up the chant of “Ole, Ole, Ole - Cisse, Cisse.” Even Cote d’Ivorians in the crowd were nonplussed at the thunderous reception their fighter received. A Brazilian media manager explained: Brazilian crowds have been latching onto names of fighters and creating spontaneous chants. Regardless of how or why it had happened, Cisse looked buoyed by the kind of thunder usually reserved for world-class football matches. And so it began.

From the buzzer, it was clear both men had come to fight. Neither player stepped back as they fought for center ring, leading to some messy clashes and clinches. First blood went to Muhammad. His high kicks have proven a deadly weapon in Rio and now he dropped the ax, missed - but without dropping his foot, whipped it back to a round kick to the face for a three-point lead. This was technical mastery of the highest level. Round two saw more clinching, with Cisse clawing back a single point. Then, the Cote d’Ivorian scored with a back heel kick fired from low that arced up into the Briton’s trunk protector. The board rang up 4-4. The crowd roared.

The tied second meant there was everything to play for in the third. Both men stabbed kicks at each other, the Briton diversifying his attack with punches, but failing to score. Both fighters looked exhausted as the match degenerated into clinch work. But in the last minute, both men tapped into hidden reserves and revived up for a last effort.

The Briton landed a crescent kick. Cisse’s head protector was sent flying. The hit did not register. A video replay was called. Disallowed. Action restarted. Muhammad added two points, taking the score 6-4. As the seconds counted down, Cisse added another point – but the Briton was backpeddling. Victory, surely, was secure? It looked like it was all over - then it happened. In the very last second Cisse lashed out with a head kick. It impacted. Final score: 8-6, Cisse.

The African was exuberant as the crowd let rip. The Briton looked disbelieving, then aghast; his coach looked equally devastated. It had been a brilliant last-second play by Cisse, but terribly bad luck for Muhammad, the bronze medalist in London 2012.

“I gave it a last kick and did not expect anything from it,” Cisse said, post-match. “I had no expectation of this! When I go home, I will hug my family very tightly.”

In the first repechage, the 13th seed, the legendary Steven Lopez of Team USA – a triple Olympic medalist, fighting, at the age of 37, in a record fifth taekwondo Olympic contest – beat 12th seed Hayder Shkara of Australia on superiority in golden point. In the second repechage, 14th seed Piotr Pazinski of Poland defeated sixth seed Tahir Guelec of Germany in golden point.

The first bronze medal match saw Lopez take on Oussama Oueslati of Tunisia, seeded 10th. The American was on game and seemed to be landing, but it was the Tunisian who consistently found the range, landing multiple kicks to the American’s head. Lopez unleashed a series of spectacular attacks as the clock counted down, but it ended 14-5, Oueslati.

The match may prove to be a landmark moment. With Lopez now 37, this could be the last time an Olympic crowd sees this tremendous competitor and gentleman of sport do battle. If so, will taekwondo ever see him like again?

The second bronze medal match saw Pazinski take on Milad Beigi Harchegani of Azerbaijan, the 9th seed. The Azeri locked his target radar on early in the match, taking a four-point lead in the first. Looking cool, composed and confident, he extended his lead to 9-0 in the second. In the break, the Pole looked stressed and tired. The Azeri landed yet another ax kick at the start of the round, taking the match on 12-point difference.

It had been a dramatic - and thunderously noisy - day of sport. Battle recommences at Carioca Arena 3 tomorrow for the fourth and final day of the 2016 Olympic Competition, when the women +67kgs and the men +80kg categories – taekwondo’s heaviest weight categories – are contested.  The taekwondo competition in Rio consists of 128 athletes in eight male and eight female categories, each of 16 players, representing 63 NOCs. 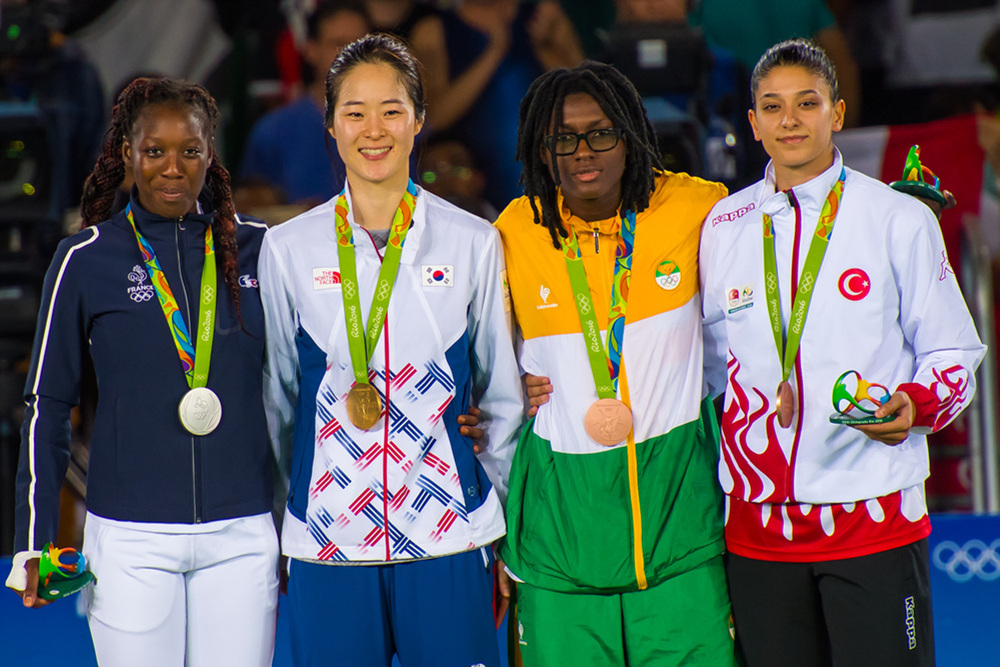 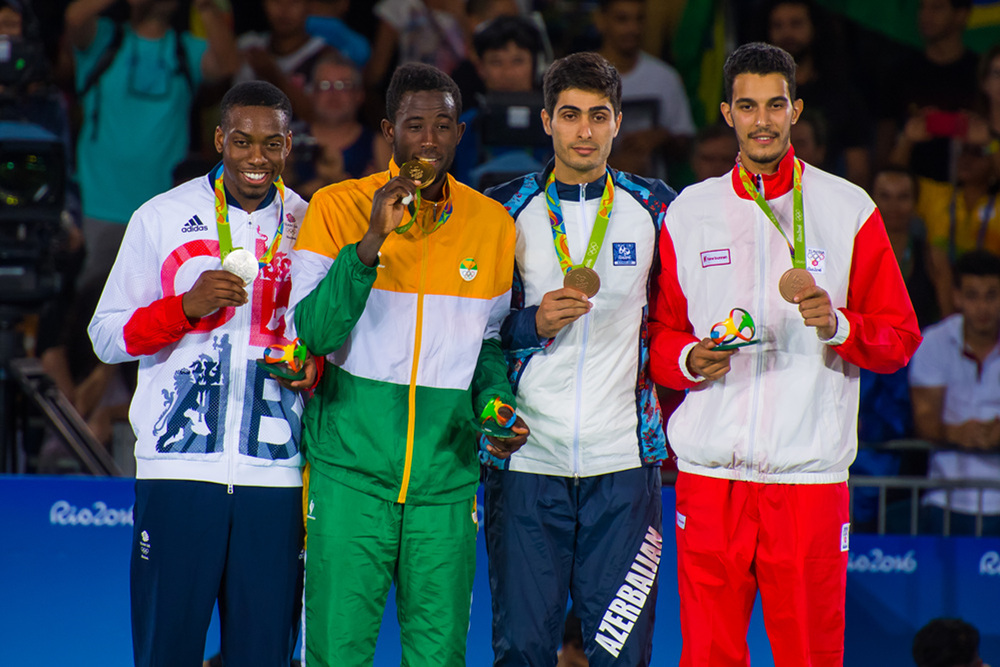