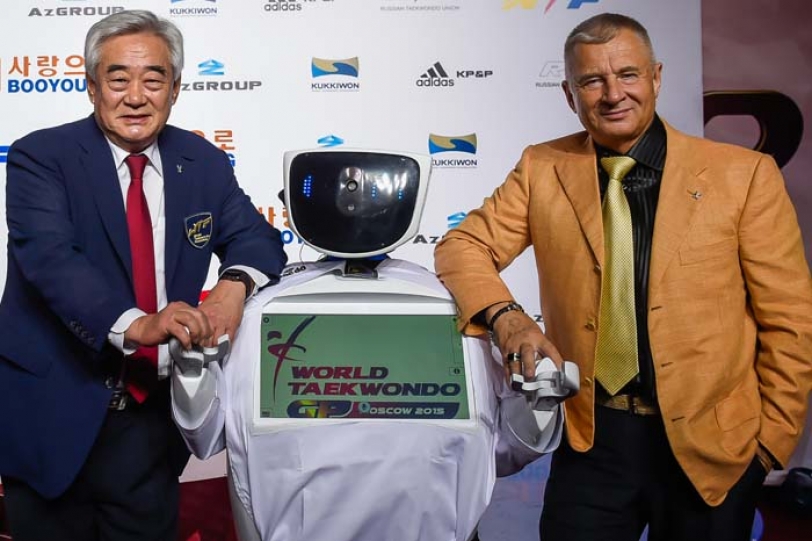 MOSCOW, Russia (August 16, 2015) – In the latest technological innovation to taekwondo - and in a world first for the sport - promotional robot, or “promobot,” delivered the medals to the winners’ podium at the 2015 World Taekwondo Grand Prix Series 1 in Moscow.

However, despite his name, his technology is all-Russian, explained Pavel Leshko of the Moscow Technical Institute, who was escorting Alantim around the championship. Alantim’s owners are the company Promobot, situated in Russia’s Permskiy region.

Over the three days of the competition, Alantim faithfully carried out his official duties, trundling sedately across the competition floor to deliver the bronze, silver and gold medals to the winners’ podium. In his down time, he provided off-mats entertainment to curious athletes and spectators in the venue foyer.

Although he was appropriately attired for the Grand Prix in a taekwondo uniform and belt, Alantim– being short, chubby and refrigerator-white - is not the kind of dangerous and athletic-looking robot encountered in Hollywood movies like “Transformers” or the Korean cartoon series “Taekwon V.”

However, even if he is not equipped to save the world from aliens, monsters and villains, Alantim’s capabilities are significant. “He is a fully functional,” insisted Leshko, explaining that Alantim can ask and answer questions in Russian, deliver objects and even lecture at universities.

Leshko demonstrated Alantim’s linguistic capabilities, asking, “Who designed you?” in Russian. Alantim promptly answered, “Very smart people!” However, when posed a question in English, Alantim went blank. “He did not understand,” explained Leshko.

The promobot’s previous appearance had been at “Innoprom 2015” in France, where he had held a ribbon cut by the mayor of Lyon during the convention’s opening ceremony. With the Moscow Grand Prix winding up on August 16, Alantim will be heading for his next job at a Russian university where students are studying how to integrate robots with everyday human life.

Now, if only they could program him how to perform a spinning heel kick …