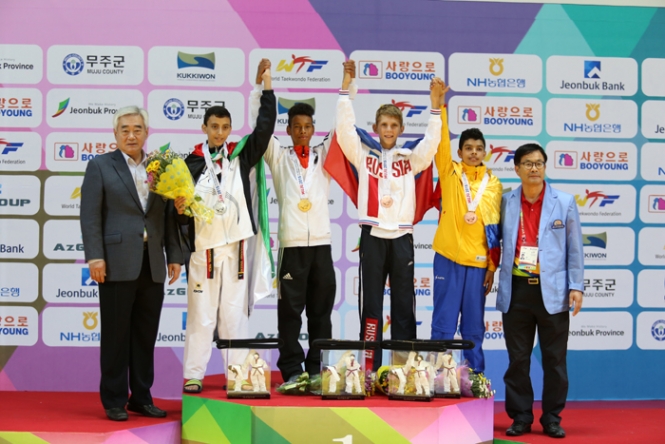 Palestine won its first-ever medal at WTF-promoted international competitions as Mohammad Yasini took the silver in the male -41kg division on the third day of the 2nd World Cadet Taekwondo Championships in Muju, Korea on Aug. 25, 2015.

Russia took two gold medals, while Iran, Germany and Korea won one gold each at the T1 Arena of the Taekwondowon in Muju, Korea on the third day of the 2nd World Cadet Taekwondo Championships.

In the male -41kg weight category, Germany's Ranye Drebes brushed aside a stiff challenge from Palestine's Mohammad Yasini to win the final match 16-13 for the gold medal. Colombia's Andres Moreno and Russia's Artem Sysoev shared the bronze medal in the same category.

For Palestine, the silver medal was the first-ever medal at WTF-promoted international championships and it marked the first medal in a single sport.

"I am happy to win the silver medal, the first medal in taekwondo for our country," said Mohammad Yasini. "I want to be an Olympic medalist."

In the male -45kg final match, Russia's Denis Lantratov beat Thailand's Suparwit Laowpolprateep 26-14 for the gold medal with a 12-point gap victory in the third round. Iran's Hamed Asghari Mahiabadi and Germany's Spyros Raffael Kostaras had to settle for the bronze medal each in the same weight division.