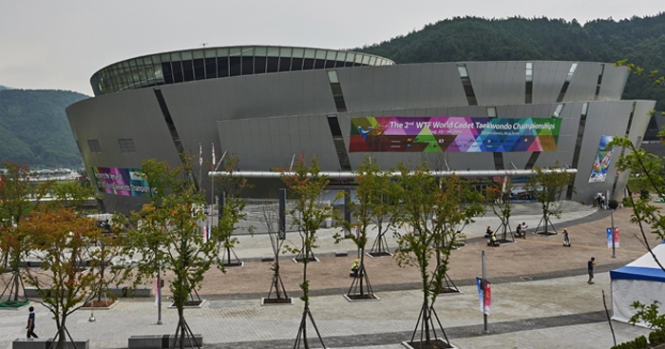 (MUJU, Korea : August 22, 2015) - The Korean county of Muju is ready for the 2nd World Cadet Taekwondo Championships, which will kick off on Aug. 23 for a four-day run.

The cadet championships, to be held at the T1 Arena at the Taekwondowon in Muju, are expected to attract a total of 465 athletes, including 219 females, from 59 countries, as well as 61 international referees.

Five octagon-shaped courts will be used together with the KP&P protector and scoring system and an instant video replay system. Semifinal matches will use two courts and final matches one court.

Reflecting the importance of the event, SBS TV will broadcast live naionwide from 2 p.m. to 4 p.m. on Aug. 24 and 25.

For the safety of the young participants, a head protector with a visor will be used. The contest time of the Muju cadet championships will be one minute and 30 seconds of three rounds with a one-minute break between rounds.

The opening ceremony of the championships will take place at 2 p.m. on Aug. 23 at the T1 Arena, in which the WTF Taekwondo Demonstration Team will make a 20-minute performance.

At the WTF Council meeting in June 2013 at the IOC headquarters in Lausanne, Switzerland, the WTF unanimously decided to organize the World Cadet Taekwondo Championships to promote taekwondo among the youth under 14, and Baku was selected as the hosting city of the inaugural event. A total of 575 athletes from 62 countries competed at the inaugural event, with Iran taking the overall male and female titles.

"Under the slogan of 'Vibrant Taekwondo, Dream Tree Taekwondo,' the 2nd World Cadet Championships will be a festival which celebrates the very best of our sport," said Chungwon Choue, president of the WTF.

"The creation of cadet championships last year was to provide an opportunity to younger athletes not only to compete in world level, but also to exchange friendship one another through understanding and respect, and gain priceless experiences learning culture and history of the hosting country," WTF President Choue said.

Song Ha-jin, governor of Jeolla Province and chairman of the Organizing Committee of the 2nd Muju championships, said, "the championships will be an opportunity to directly see and feel majesty of Taekwondowon, the mecca of world taekwondo." "Also the championships are believed to promote harmony and friendship among participants and understand Korean culture through field trip and various experience programs," Song said.