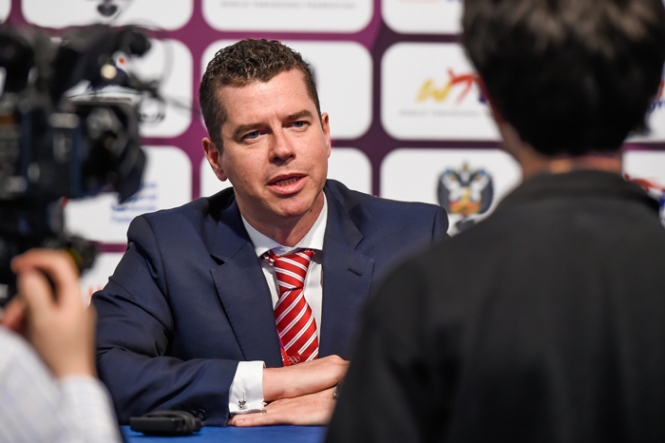 During his visit to the seven-day championships, McConnell attended the WTF’s General Assembly, held meetings with the WTF leadership, watched the first day of the action, and presented medals to the winners in the men’s – 58kg category.

It marked the first time that the sports director had seen a taekwondo event outside the Olympic Games and the Youth Olympics. His verdict? “Fantastic!”

Like other visitors and attendees, McConnell noted the quality of the organization achieved by the central Russian city.

“The venue, having been used for judo and now for taekwondo, shows there is outstanding local organization,” he said during an interview at the Traktor Arena’s media center. “One of the things we have seen is the organization at all levels of Russian sports, from local government to the Ministry of Sports. It shows what you can achieve.”

McConnell also commented on the widespread global distribution of taekwondo, noting that “over 140 countries are represented,” in Chelyabinsk, and that in London 2012 the eight Olympic gold medals went to eight different nations, showcasing “the universal nature of the sport.”

The Chelyabinsk championships have witnessed a historic moment: As the centerpiece of the opening ceremony, a first-ever joint demonstration was conducted by the International Taekwondo Federation (ITF) and WTF demonstration teams. The groundwork for that had been laid by the signing of a joint protocol of accord last August at the Youth Olympics in Nanjing, China, by the ITF and WTF presidents – a signing overseen by IOC President Thomas Bach.

Calling the protocol “a great initiative,” McConnell, said, “It is important for the athletes to be able to access each other’s events, it gives opportunities to athletes.”

Discussing the Taekwondo Peace Corps, an organization which dispatches taekwondo coaches to developing nations, McConnell noted that “all sports have a role to play in society and building bridges.” “The work taekwondo does in this area is very impressive,” he continued. “It shows the values of the sport, and it is very well connected with other agencies, from the U.N. down.”