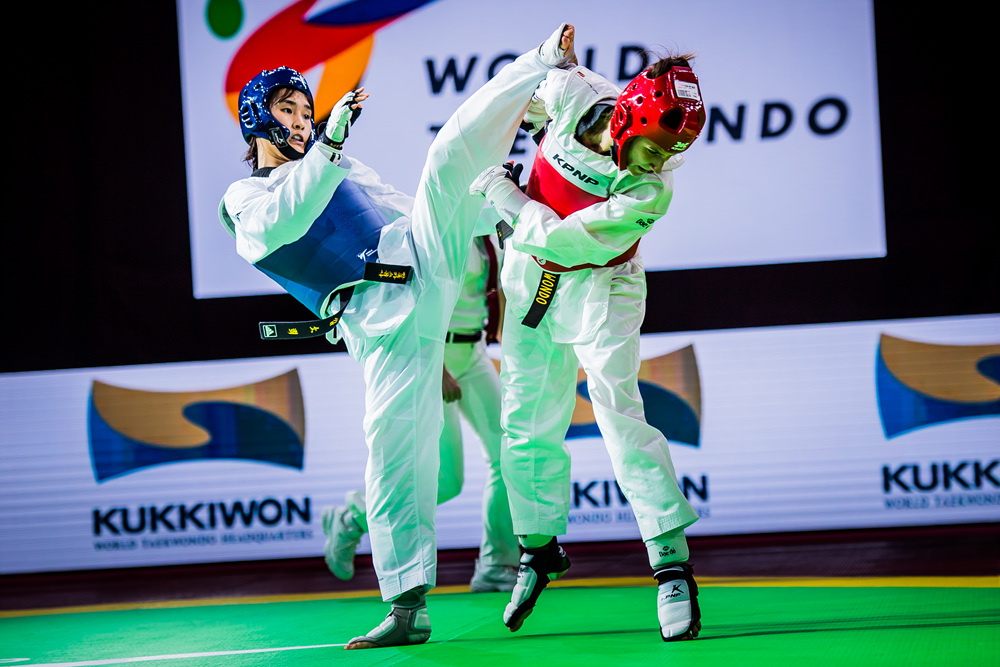 MOSCOW, Russia (Aug 12, 2018) – Korean and Russian both struck gold on the third and final day of the 2018 World Taekwondo Grand Prix, as the last two categories of the tournament were contested in the USK CSKA Bascetball Arena in Moscow, Russia.

Silvers were won by Croatia and Jordan, while Korea, Turkey, Croatia and Uzbekistan had to be satisfied with bronzes.

In the first semifinal of the category, Rio Olympic gold medalist So-hui Kim of Team Korea took on teammate and World Champion Jae-young Sim. The two Koreans know each other’s games inside out and it showed: Round 1 started with a light spar. But this was a real match, the intensity rose, and the round ended 2-0 with Kim ahead. In the second, Kim went to work in the clinch, raising her points to five, before Sim landed a body kick for two points. The round ended 8-0 in Kim’s favor. In the third, Sim unleashed a series of high crescent and ax kicks to the head, then a serial of body kicks – whose thwacks on Kim’s torso protector drew gasps from the crowd – raising her points to seven. But Kim was unwilling to relinquish her lead, and lifted her own score to 13. Some nice work from Sim won applause from the crowd and the two traded kicks in what could have been a technical demonstration. The match ended 18-12 to Kim.

In the second semi, Croatian Kristina Tomic fought Zeliha Agris of Turkey. Both were well-matched in terms of physique and technique, fighting at long range, exchanging round, side and push kicks. The Turk drew first blood with a body strike and the Croatian raised her work rate, ending the round up, 3-2, after landing a body kick and forcing Agris out of the area. In Round 2, the Turk started with a high kick then a spin kick, but the Croat landed another body shot. This was fierce stuff, recognized by the crowd, who applauded the high kicks. Round 2 ended 5-2 to Tomic. The third started with Agris firing kicks on the high line, seeking a big score; Tomic continued stabbing away to the body. The board climbed to 8-4.The Turk appeared frustrated – she was connecting but not scoring – and dominating the mats while the Croat circled and evaded. It ended 11-5 to Tomic after a match which had been a showcase of clean, long-range taekwondo. 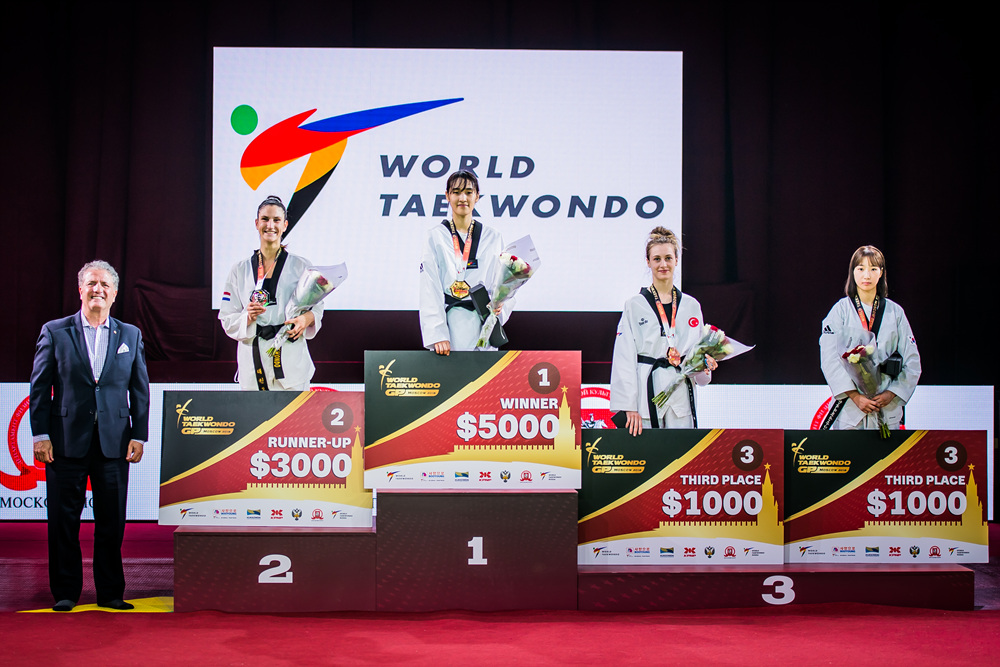 The final pitted Korea’s Kim against Croatia’s Tomic. Tomic had the height advantage; Kim had the experience and tactical nous. The Korean scored to the body almost immediately, seizing a two-point lead. The Croatian tried to pressure Kim back – but Kim made the space and landed another well-timed cut kick. Tomic was putting the pressure on, but it was Kim who was connecting, and Round 1 ended 6-0 to the Olympic champion. In the second, Kim, normally a counter-fighter with prudent technique, went over to the offensive, forcing the Croatian off the mats. She then landed not one, but two head kicks. Kim was now fully locked on and scoring consistently before Tomic finally found the range. Round 2 ended 19-2 to Kim. In the third, the Croat stabbed forward aggressively – only to be impaled upon Kim’s kick. The Korean was a scoring machine, but the Croat returned fire, including with a head kick. However her 10 points were far short of Kim’s 24. The final seconds saw the points flying, but it ended 29-15 to Korean. Surely, there are few fighters in any category who are as consistent at point scoring as Kim.

The first semi in the category should have pitched Russia’s Maksim Khramtcov against Croatia’s Toni Kanaet. But Kanaet was unable to fight due to an injury incurred in the preliminaries, giving Khramtcov a by. 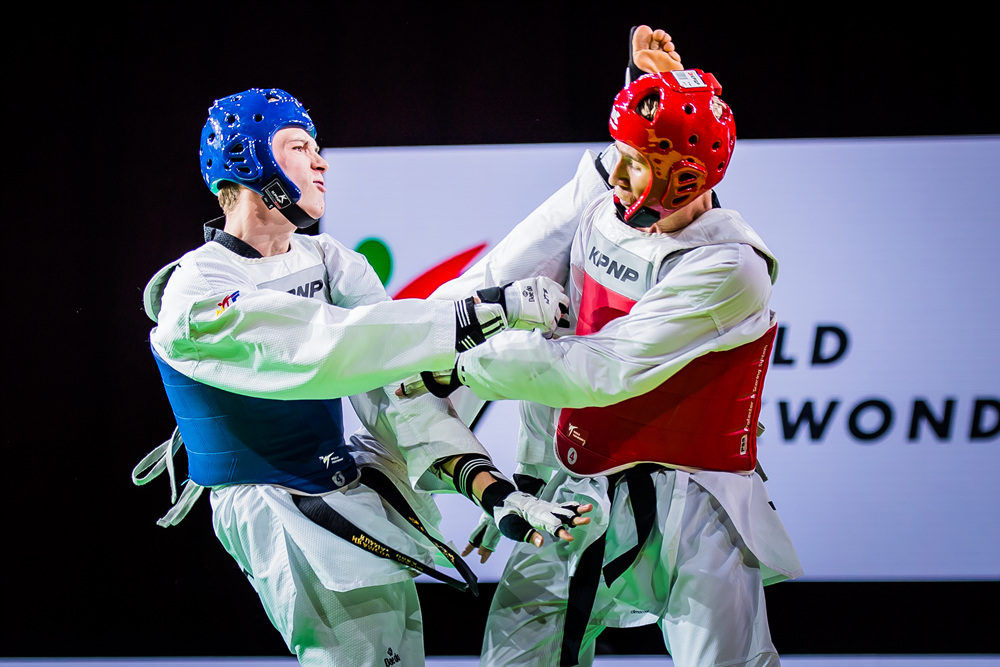 The second semi-final saw Maksim Rafalovich of Uzbekistan do battle with Saleh Elsharabaty of Jordan. The Jordanian opened the scoring with a cut kick, and the two foot fenced. Elsharabaty chanced a hook kick to the head; the Uzebek equalized to the body; and the Jordanian reestablished his lead with another body kick, ending the round up, 4-2. Elsharabaty now started varying his technique with a very dangerous looking ax kick - and landed it, going up, 7-2. His high-line attack continued with a round kick that flickered out with cobra-like speed, then he landed another heavy body shot for a 9-2 lead – though he was penalized a point after falling during a spinning kick. The round ended 9-3 to Elsharabaty. In the third, Rafalovich attacked and managed to drop Elsharabaty in the clinch, going up to 4-9. He continued to ply his front-leg attack, and landed a counter cut kick to the Jordanian’s body. His side kick was doing good work but was not generating the high scores he needed to catch Elsharabaty, who raised his points to 11, then to 13. In the last seconds both fighters chanced spinning heel kicks, and the match ended 13-7 putting the Jordanian though.

For the final it was Elsharabaty who scored first – but he was almost immediately countered by a yelling punch from the Khramtcov. Khramtcov landed a head kick in the clinch, but was run across the mats and dropped by the Jordanian as the two big fighters went all out in a display of controlled ferocity. The rounded ended 8-6 to Khramtcov - and loud applause. In the second, Khramtcov unleashed a blitzkrieg of kicks, ringing up the scoreboard - but Elsharabaty, unintimidated, was not yielding an inch. The Russian delighted the local crowd as he soared across the mats with a flying ax kick – an awesome technique. Having benefitted from a by in the semifinal, his energy, combined with a spectacular technical arsenal, was putting him ahead, 19-6. Another Khramtcov punch echoed around the stadium. The rounded ended 22-6, with the Russian buoyed by the roaring crowd. In the third, Elsharabaty tried to come under the Russia guard, then uncorked a spinning heel kick as he tried desperately to equalize. A cut kick from Khramtcov could be heard around the arena, then he lunged across the mats with a punch. He tried more aerials while the Jordanian forced him off the mats – where the bell rang. It was a convincing 29-11 victory for Khramtcov and yet another addition to his winning streak. 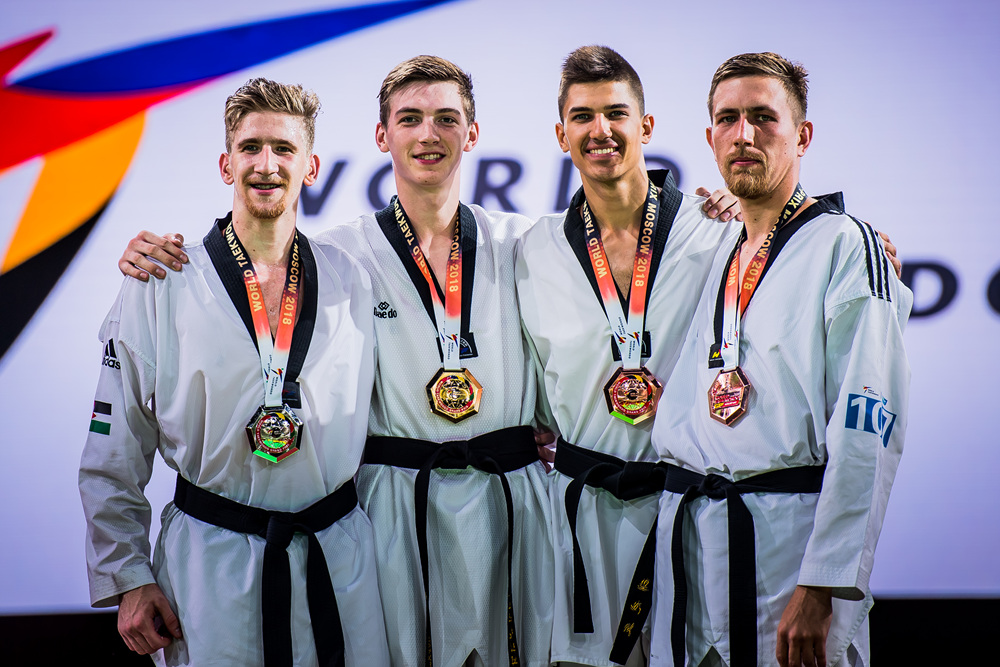 That combination of entertaining fight and his victory provided a perfect conclusion to the Moscow Grand Prix, was the second edition of 2018’s series, following the season opener in Rome, Italy. The third edition takes place in Taoyuan, Chinese Taipei, in September 19-21.