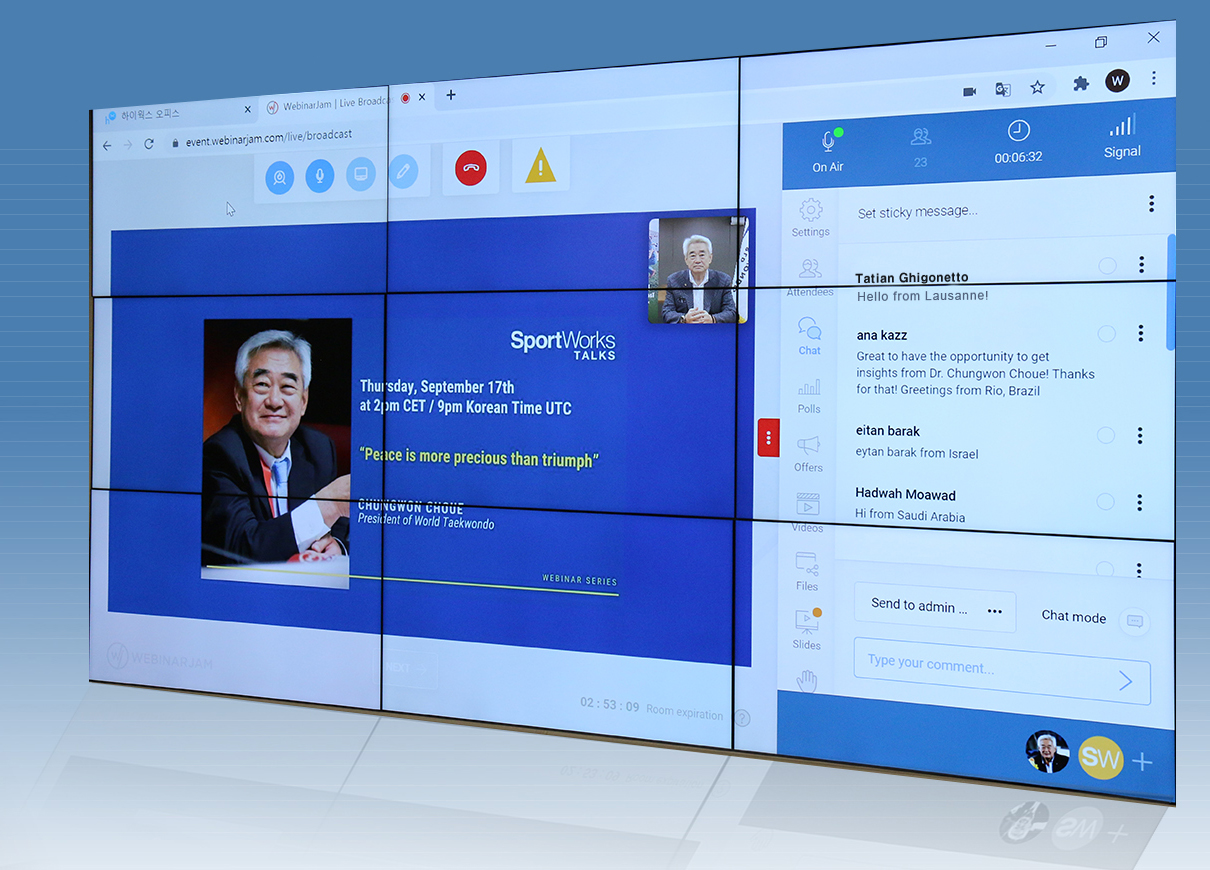 SEOUL, Korea (September 17, 2020) - World Taekwondo President and Chairman of the Taekwondo Humanitarian Foundation (THF) Chungwon Choue today presented a SportWorks Talks webinar on how taekwondo has been used as an effective tool for social development and peace.

More than 700 people from around the world registered to attend the webinar. During the presentation, President Choue discussed how World Taekwondo has supported the global peace movement. President Choue’s dedication to global peace can be traced back to his late father Dr Youngseek Choue who, in 1981, successfully proposed to the 36th United Nations General Assembly to recognise September 21 as the International Day of Peace. 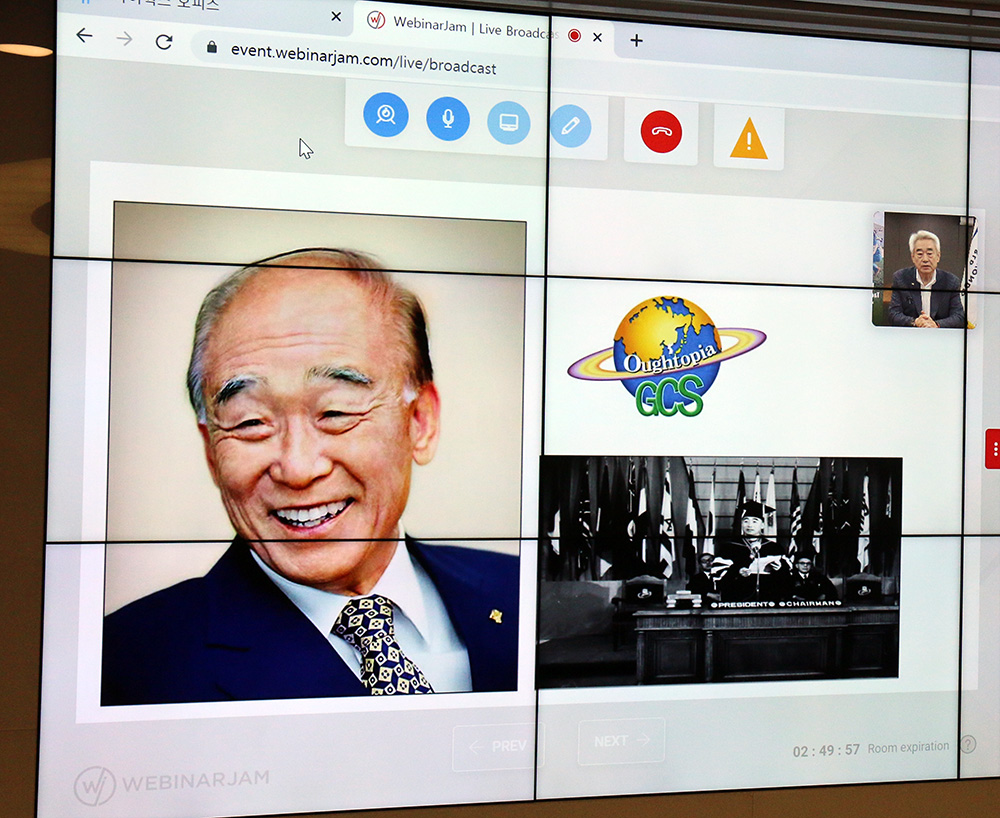 Inspired by the work of his late father, President Choue launched the Taekwondo Peace Corps in 2009 to send coaches and volunteers around the world to help young people in developing countries and promote cross-cultural respect. Over the last 10 years, more than 2,000 volunteers have touched the lives of thousands of young people around the world through the Taekwondo Peace Corps.

The next peace initiative was the creation of the THF which was formally established in 2016. The THF has launched projects in Jordan, Niger, Turkey and Rwanda, with a flagship Humanitarian Taekwondo Centre constructed in the Azraq camp in Jordan. As of today, 15 children in that camp have become black belt holders and one is even on the Olympic Scholarship training for the Tokyo Olympic Games next year.

Through all of these global peace movements, World Taekwondo also launched a successful crowdfunding campaign for its Great Champion Scholarship to help Lebanese children affected by the devastating explosion in Beirut last month. Within weeks, the global taekwondo family raised 10,000 USD to assist them with their tuition and taekwondo fees, and also collaborated with the Asian Development Foundation to donate 30,000 USD to aid recovery efforts in the city.

“Sport has a powerful role to play in addressing such social issues. Through Taekwondo, we promote values such as inclusiveness, respect, tolerance, courtesy, and integrity. On the mat, we are competitors but we play fair. Off the mat, we are friends.

“The children we have reached had no place to call their home, and some of them witnessed war and tragedy. They had lost hope and dreams but through Taekwondo, they found a way to be inspired again

“Achieving peace is not just for World Taekwondo, but it is a responsibility of every International Sports Federation in the Olympic and Paralympic family.”

Following the presentation, President Choue answered an array of questions from the webinar participants on World Taekwondo’s various projects and efforts to promote peace. 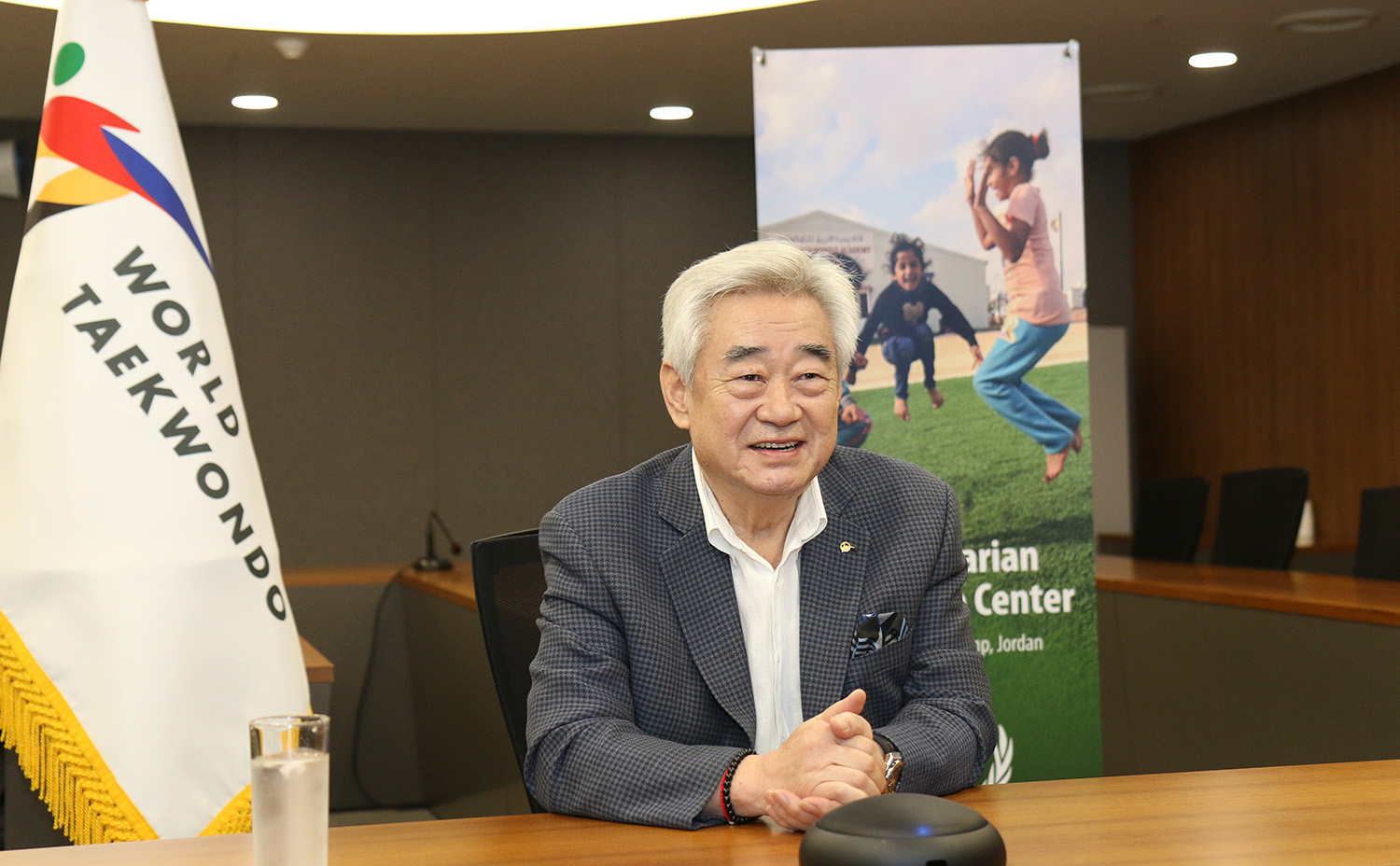 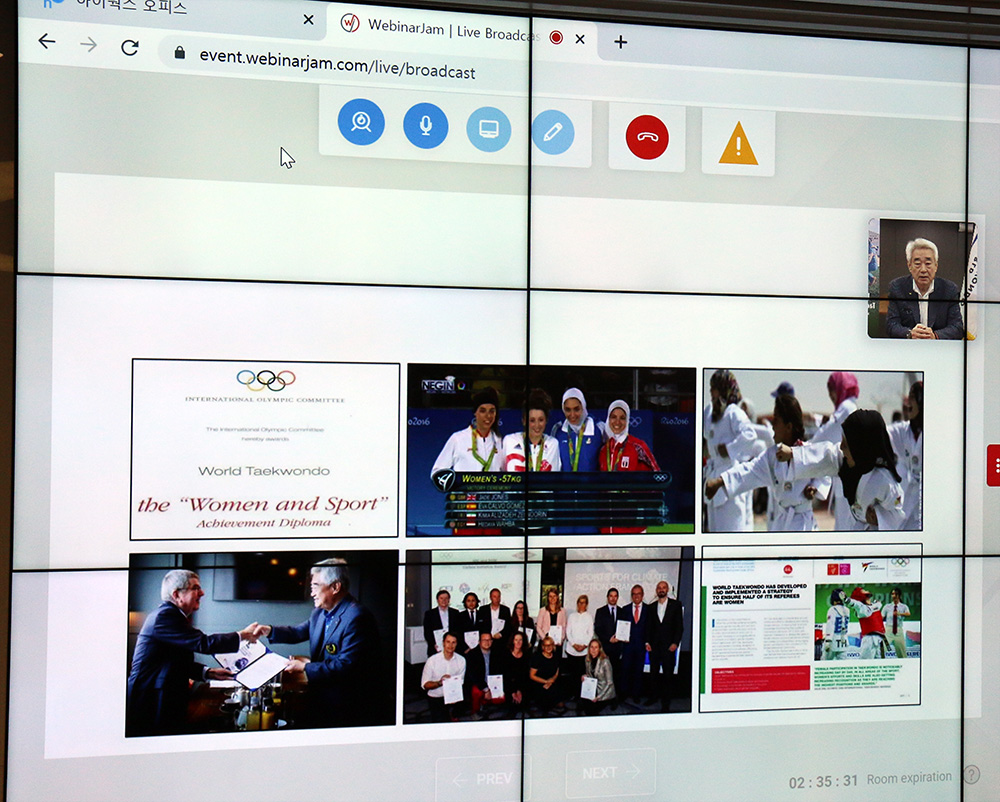 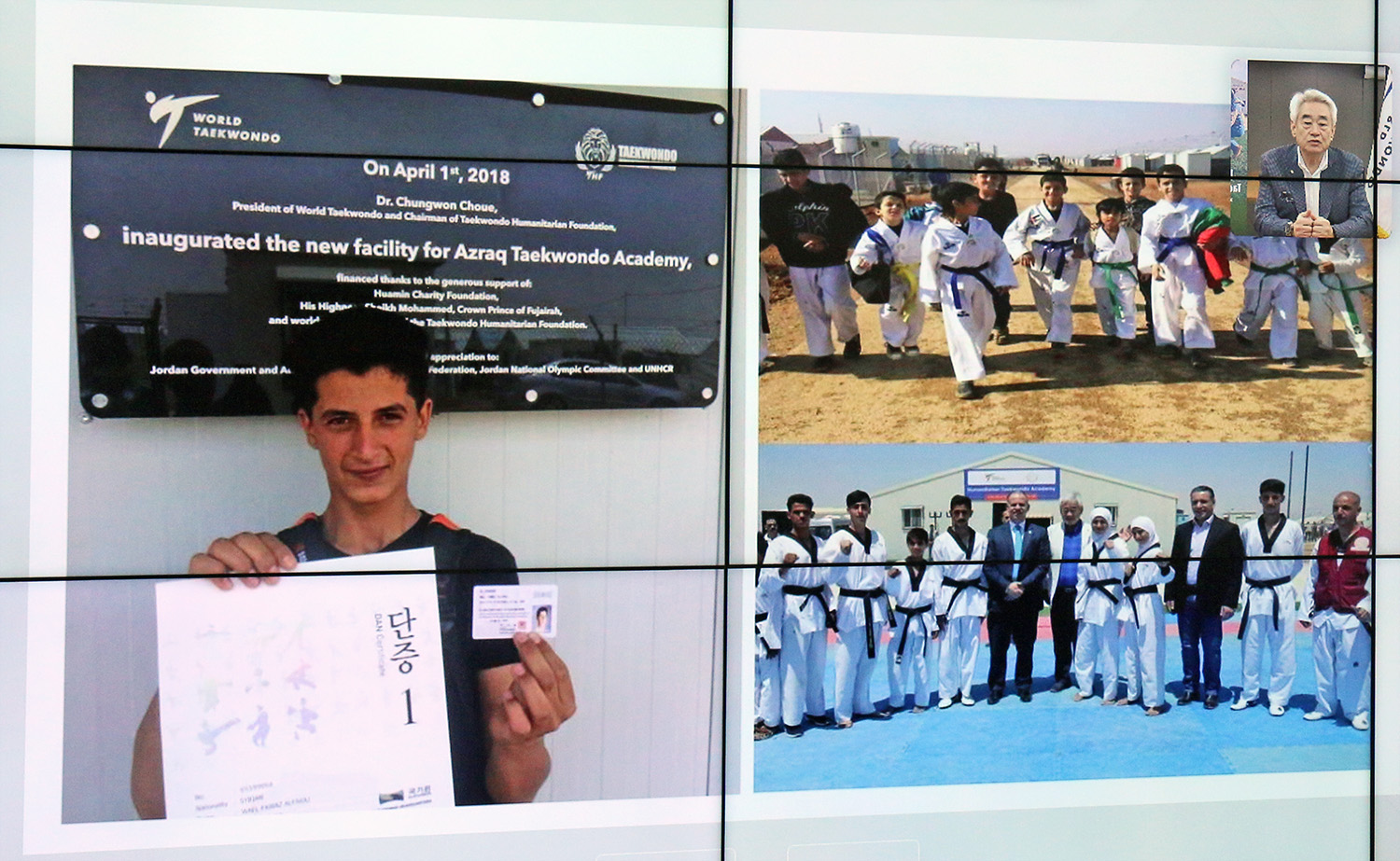 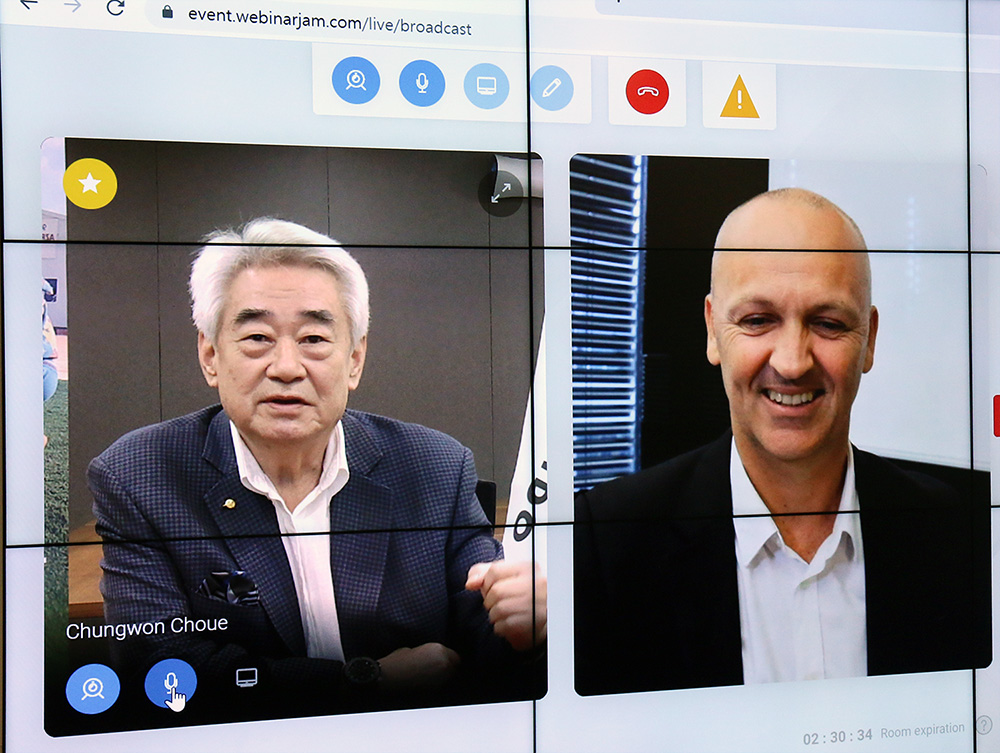