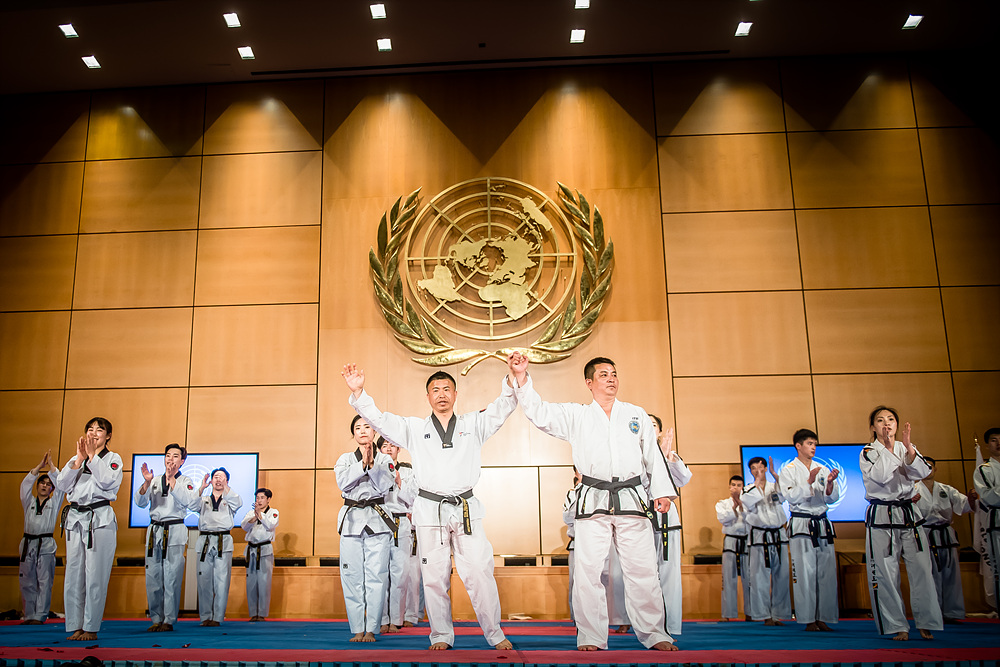 GENEVA, Switzerland (April 12, 2019) – World Taekwondo (WT) and the International Taekwon-Do Federation (ITF) today showcased the power of taekwondo to promote peace during a joint-demonstration at the United Nations (UN) Office in Geneva.

The joint-demonstration was the fourth demonstration held over the last week to mark the 25th anniversary of taekwondo being included on the Olympic Programme and to celebrate the growing collaboration between the two federations.

The UN office in Geneva (UNOG), a symbol of unity, collaboration and international peace, provided the perfect setting for the joint-demonstration, which sent out a strong message about taekwondo’s power to teach values that transcend sport.

UN Geneva Director General Michael Moller, ambassadors, diplomatic corps, board members and staff from international organizations, including the UN, watched with awe as 28 delegates from WT and 23 delegates from ITF, showcased the skill, excitement and drama of taekwondo.

This is the second time WT has visited the UN offices in Geneva, after an initial visit in 2016 to discuss humanitarian and peace building initiatives. The WT Demonstration Team had the honor of performing a demonstration during that visit. 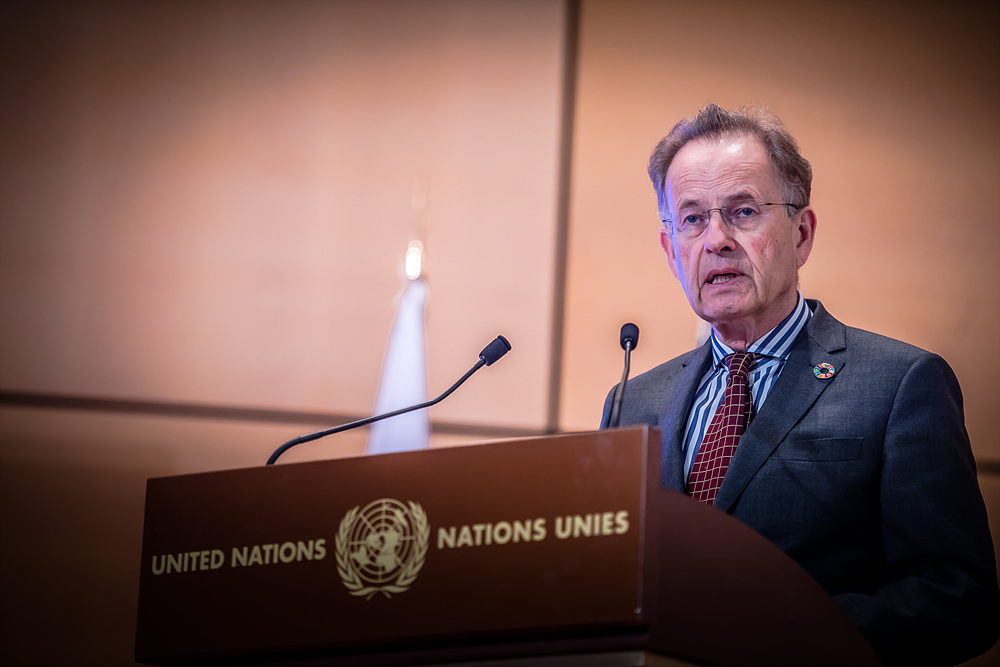 Prior to the joint performance, Director General Michael Moller said:

“The performance we are now going to see is a testament to the power of sport in bringing peace and reconciliation, friendship and harmony. We are proactively looking for ways to strengthen our cooperation with international sport federations. We are doing this because we see important synergies between the work of sport federations and international organizations. Sport is an important enabler to reach out to young people worldwide and to disseminate the values enshrined in the UN Charter 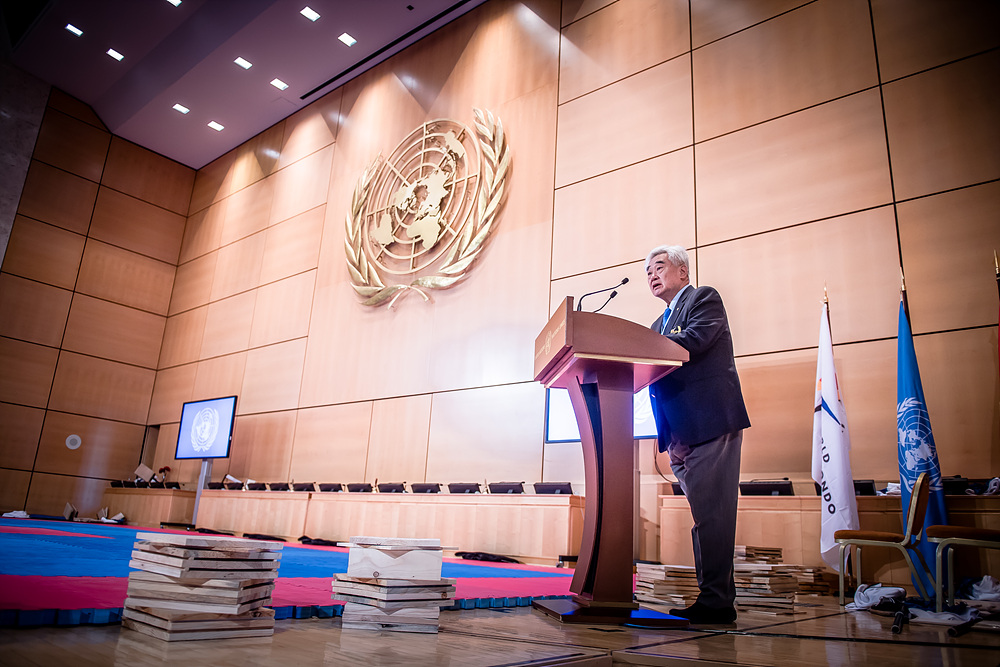 “It is an honor to be back at the UN office here in Geneva. WT and the UN share many of the same values. It was at the UN headquarters in New York in 2015 that we first announced the Taekwondo Humanitarian Foundation (THF). Since then, we have supported a number of humanitarian and peace building initiatives all around the world.

“Today was a symbolic moment for our sport as it was the first time that WT and ITF have performed together at the UN. This sent out a strong message of collaboration and peace. We have different rules, use different equipment and some of the techniques used by our athletes have diverged. But as today’s event has proven, we are moving towards unity. I would like to thank UN Geneva Director General Michael Moller, who has hosted us here today.”

WT and the UN have enjoyed a close relationship for many years, particularly in providing opportunities for refugees. Establishing the THF to empower refugees is a critical part of these efforts. At the THF’s Humanitarian Taekwondo Center, they not only teach young people taekwondo but also how to live as global citizens. WT has encouraged other International Federations to join them in providing opportunities for young people to practice sport in refugee camps around the world. 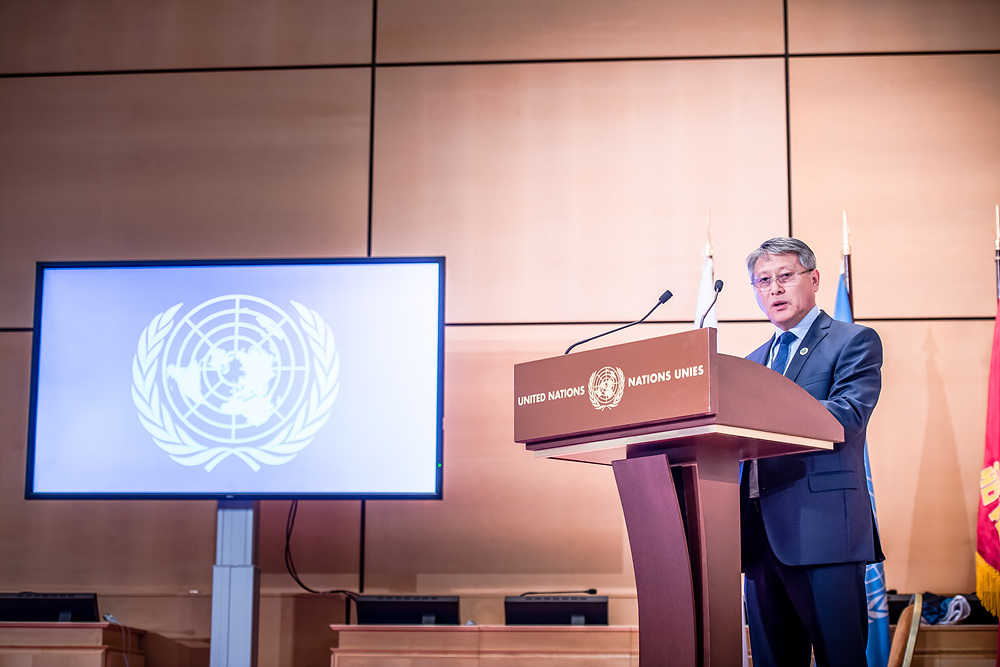 “ITF have conducted joint demonstrations with WT several times in the past with the purpose to unify taekwondo. Taekwondo is the legacy and pride of mankind as it promotes people’s health and aspires for peace and justice. I hope this historic event will be the opportunity to unify taekwondo.”

Prior to this event at UNOG, a WT and ITF joint demonstrations took place at the World Summit on the Information Society (WSIS) under the theme of “Taekwondo for Peace.” 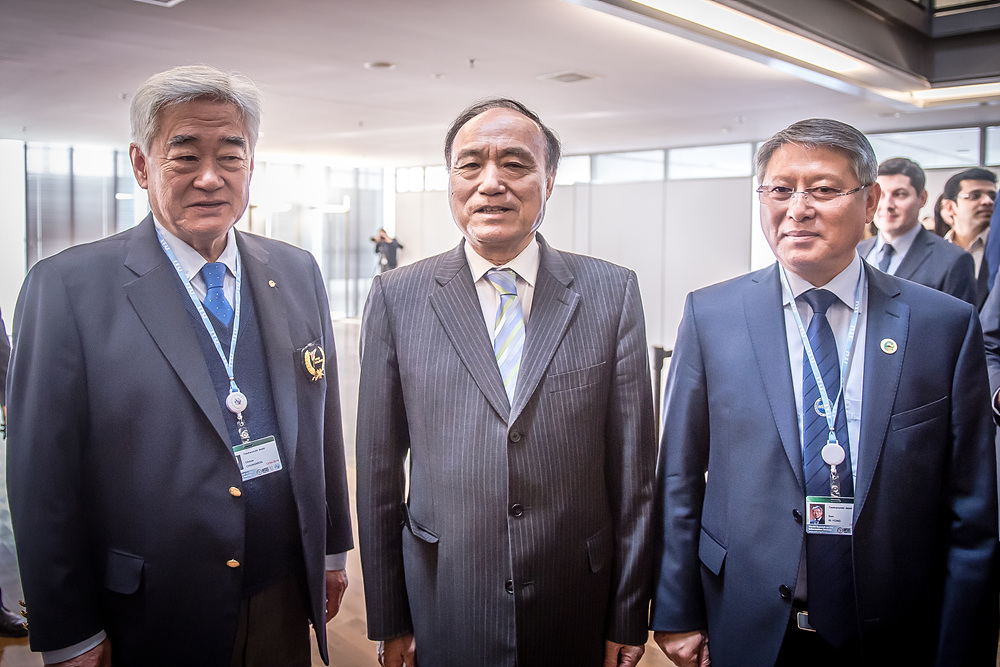 “The ancient taekwondo teaches respect, commitment, responsibility and perseverance. These values lie at the heart of the United Nations Charter. Like sport, information and communication technology is an important tool for development and for peace. Both promote understanding and cooperation, and we need this now more than ever.”

The joint WT-ITF demonstrations of the past week began on 5 April in Vienna, Austria where the ITF headquarters is located. The next demonstration took place on 11 April at the Olympic Museum in Lausanne in cooperation with IOC President Thomas Bach before today’s demonstrations capped off the celebrations. 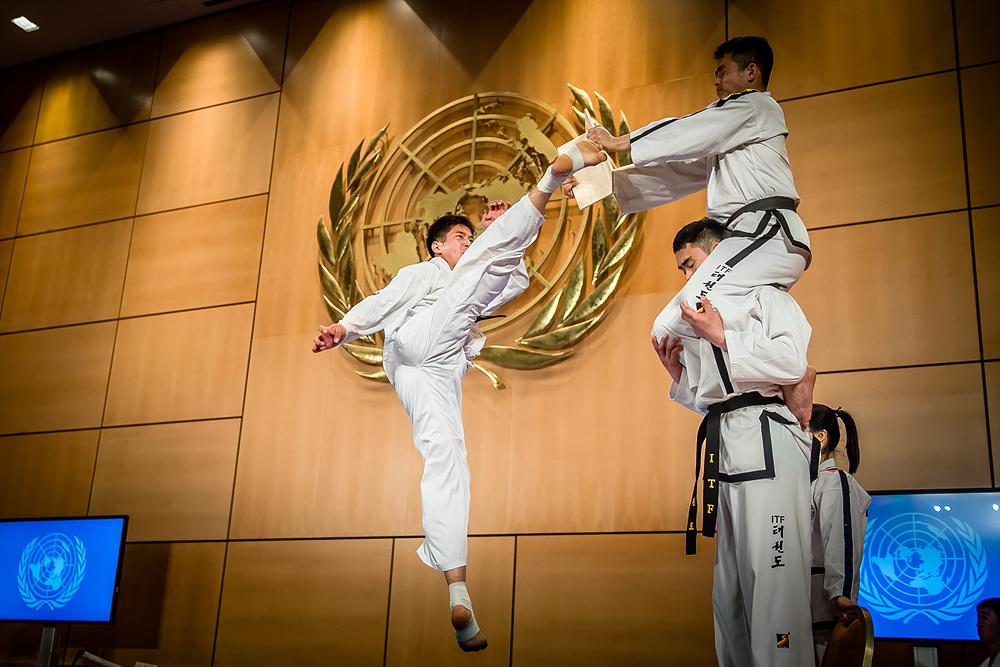 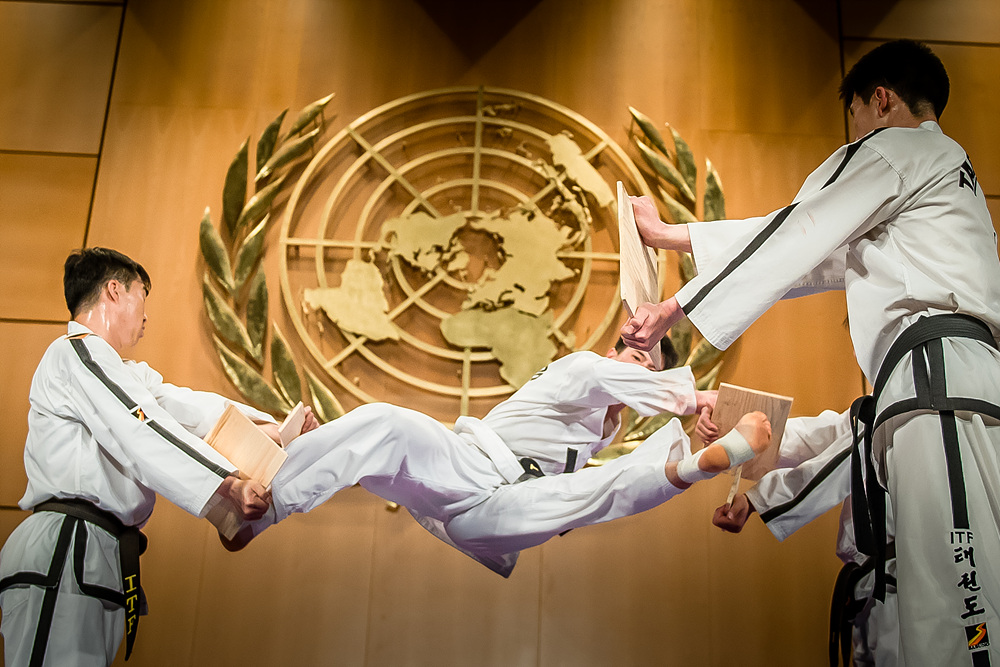 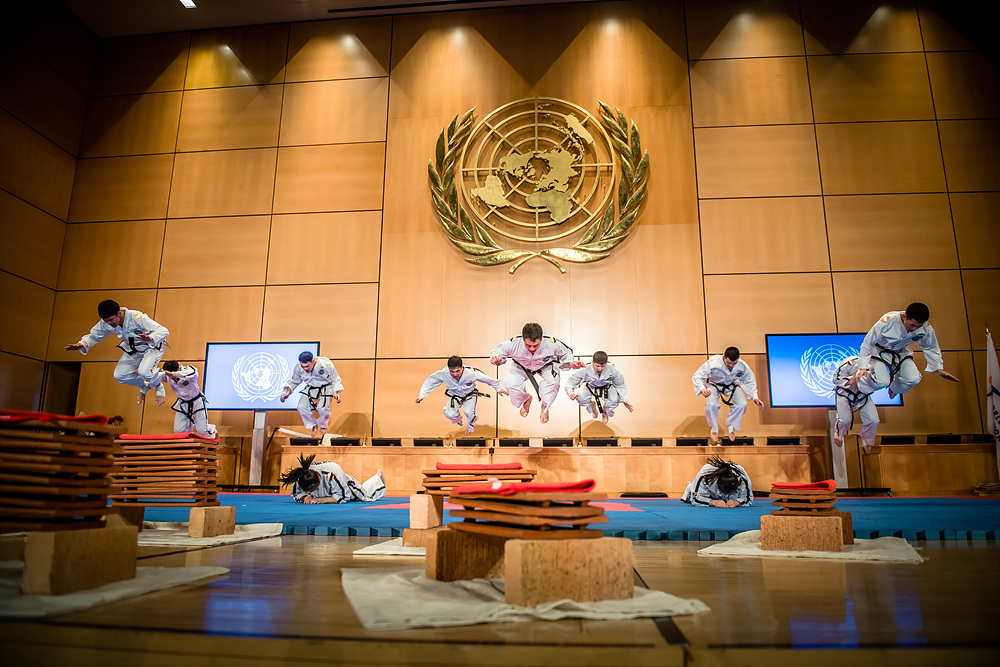 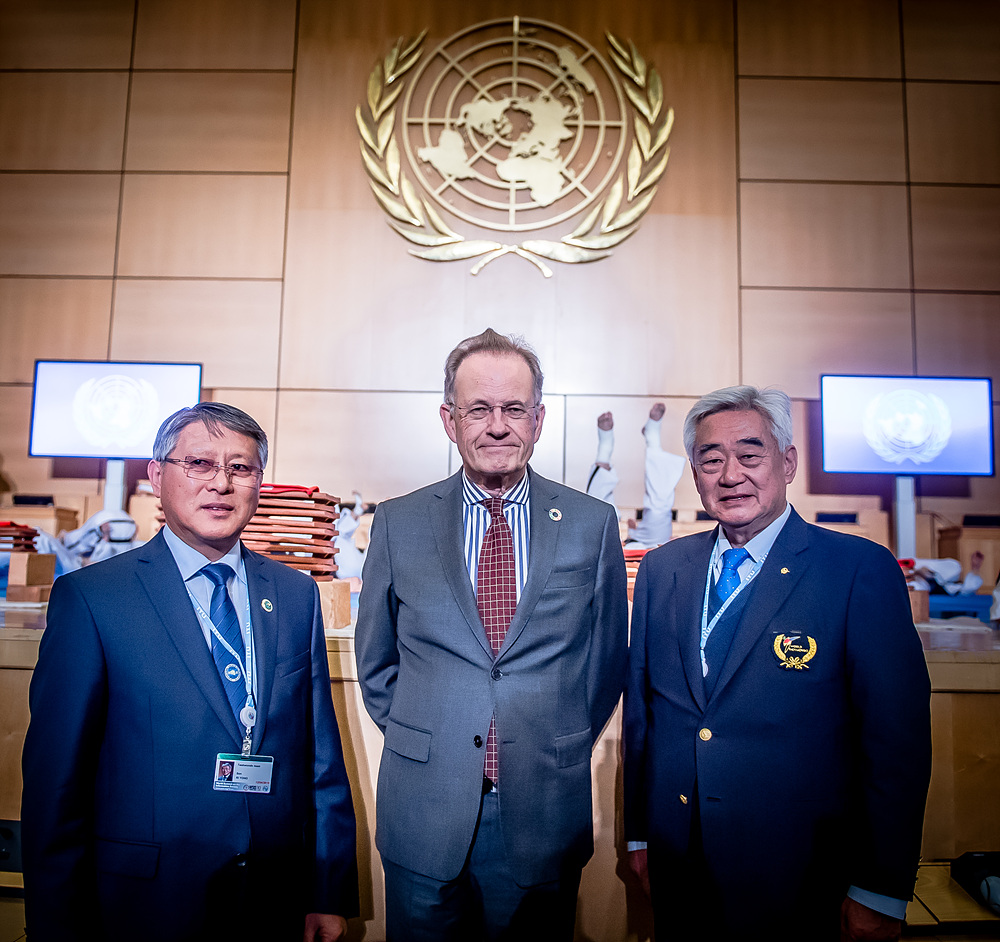 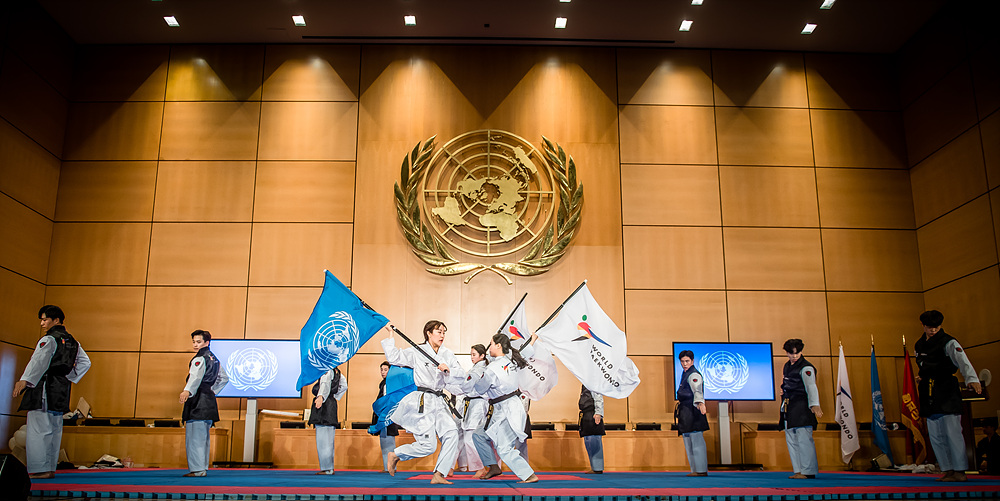 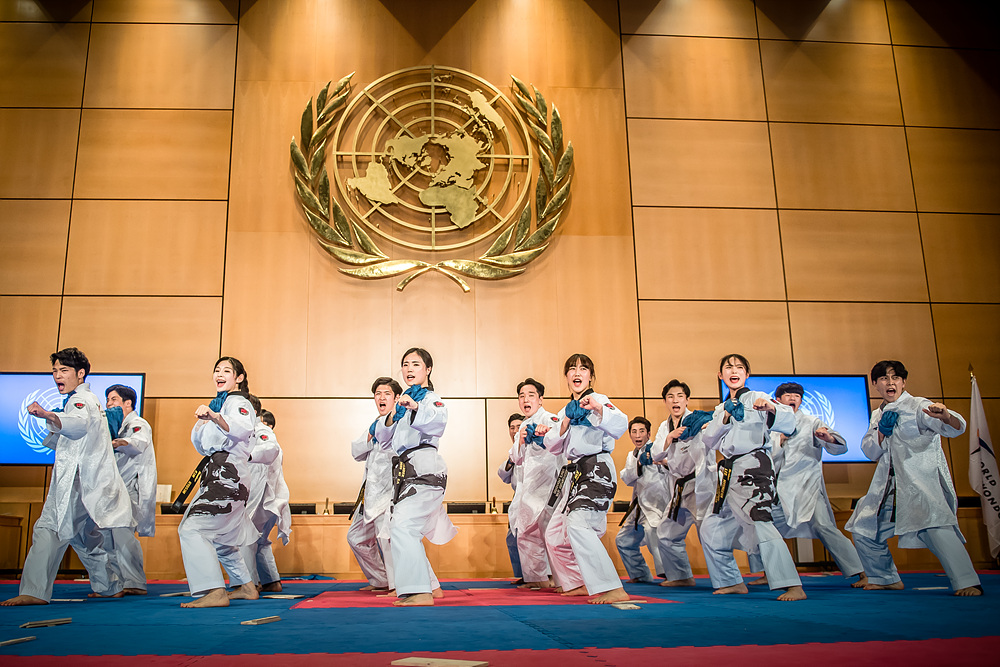 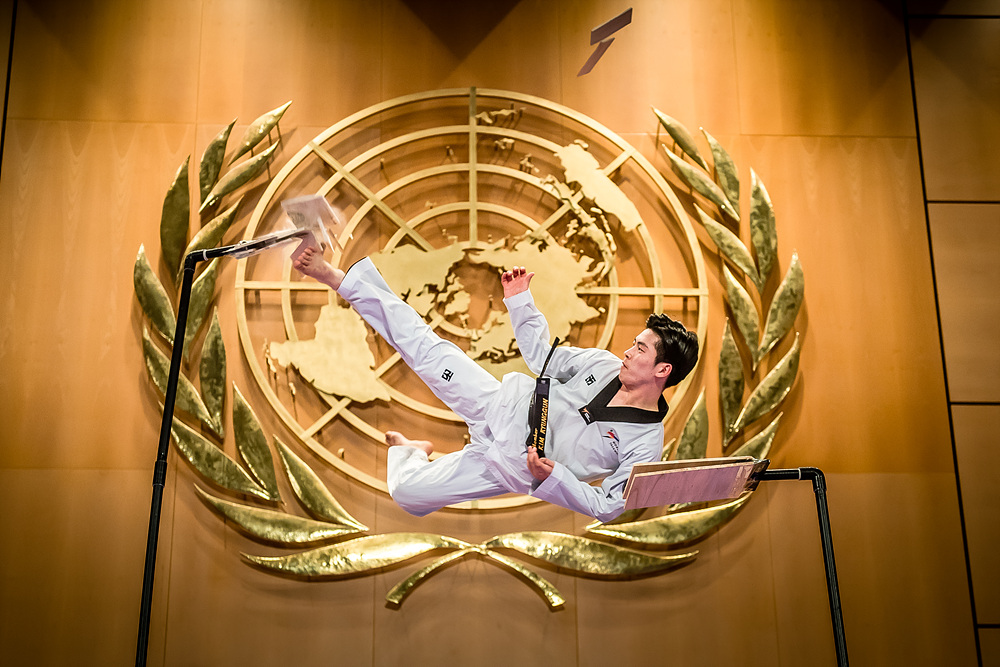 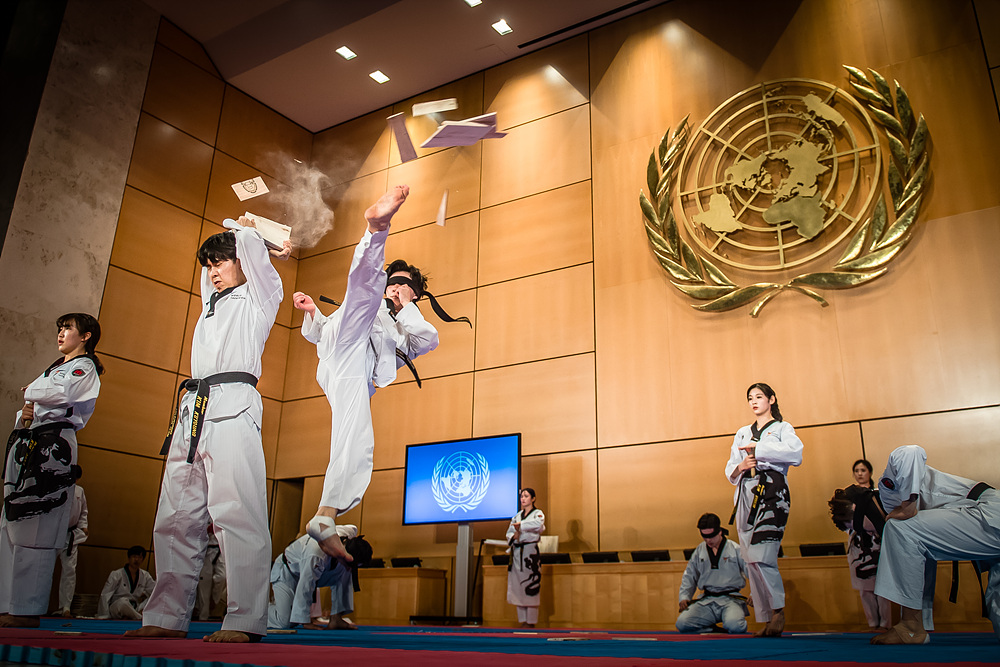 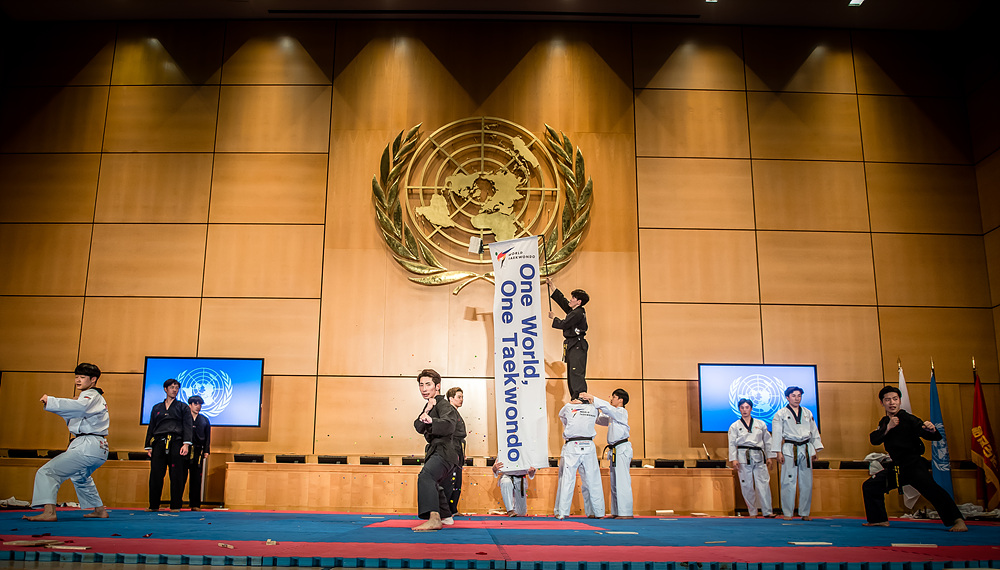