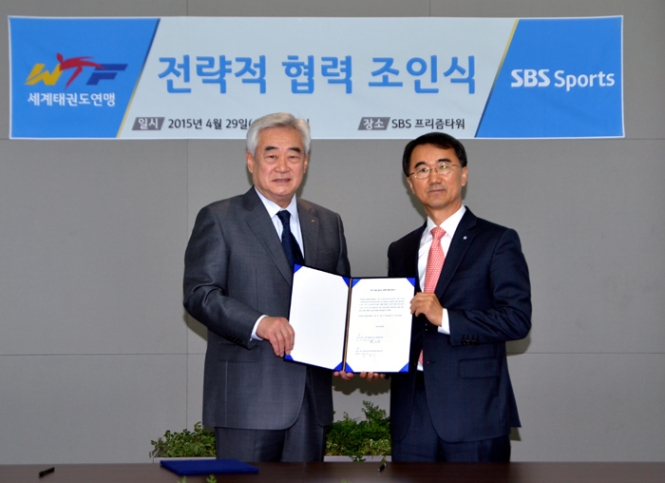 The World Taekwondo Federation has signed an agreement on broadcasting and technical services with SBS Sports.

The agreement was inked between WTF President Chungwon Choue and Hwan-sik Yoo, president & CEO of SBS Sports, in a ceremony held at the SBS Prism Tower in Seoul, Korea on April 29, 2015.

Under the pact, SBS Sports, a major broadcast company in Korea, will broadcast major WTF-promoted events in Korea. Among the WTF events to be broadcast in the form of highlights for Korean fans are the upcoming 2015 World Taekwondo Championships to be held in Chelyabinsk, Russia on May 12-18, 2015, and World Taekwondo Grand Prix series and finals to be held this year and 2016.

SBS is in charge of producing international signals for Olympic taekwondo and archery for the 2012 London and 2016 Rio de Janeiro Olympic Games as an OBS (Olympic Broadcasting Service) team.

SBS is also to provide the WTF with technical services related to broadcasting at major WTF events.

“With the strategic partnership with SBS Sports, we expect a quality broadcasting of taekwondo competitions,” said WTF President Choue.