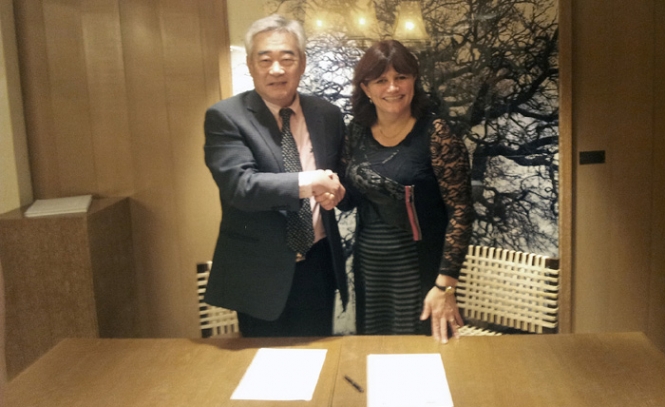 World Taekwondo Federation (WTF) has signed a memorandum of understanding (MOU) with the International Blind Sport Federation (IBSA) to promote para-taekwondo for athletes with a visual impairment.
The MOU was signed by WTF President, Chungwon Choue, and IBSA President, Ms. Jannie Hammershoi, on 24 November 2013 at the Athenaeum Intercontinental Hotel in Athens, Greece at the 2013 IPC General Assembly.
As part of the MOU, the two sides agreed that the 5th World Para-Taekwondo Championships in 2014 will include poomsae competitions for athletes with a visual impairment and will be officially recognized by the IBSA.
The two sides agreed to discuss what modifications could be made to the sport to best serve competition between visually impaired athletes and WTF also agreed to promote para-taekwondo for visually impaired athletes among its 205 Member National Associations.
Speaking after the singing of the MOU, WTF President Choue said:
“We are happy to have signed an MOU with the International Blind Sport Federation and look forward to learning from their expertise in how to best serve athletes with a visual impairment.”
“The hope that taekwondo brings is limitless. It knows no boundaries. It does not favor any gender or discriminate against age, ability, religion or sexual orientation. Taekwondo truly is a sport accessible to all and one which inspires and empowers anyone who experiences it.”