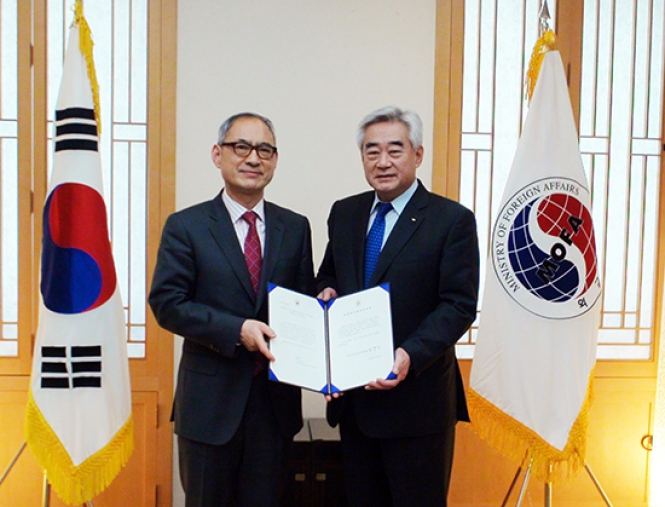 WTF President Chungwon Choue has been appointed as an honorary consul of Honduras in Seoul.

WTF President Choue received a certificate appointing him as an honorary consul of Honduras in Seoul from Jae-hyun Bae, deputy minister and chief of protocol of the Korean Ministry of Foreign Affairs, on behalf of Foreign Affairs Minister Byung-se Yun, in a ceremony at the ministry on April 4, 2013.

On hand at the ceremony were Honduran Amb. to Seoul Michel Idiaquez Baradat and Hye-hyeong Cho, chairman & CEO of Nara Holdings Corp. and dean of the Corps of Honorary Consuls in Korea.

The certificate reads “I, Yun Byung-se, Minister of Foreign Affairs, confirm that Mr. Chungwon Choue has been appointed by the Government of the Republic of Honduras as its Honorary Consul in Seoul with jurisdiction over Seoul, and hereby recognize him as such, and authorize him to exercise such functions as are permitted to the Honorary Consul by international laws and the laws of the Republic of Korea.”

At the invitation of Honduran President H. E. Porfirio Lobo Sosa, WTF President Choue visited the Presidential Palace of Honduras, together with members of the WTF Demonstration Team, on Dec. 3, 2012. In recognition of his special contribution to the promotion of bilateral relations between Korea and Honduras through taekwondo, WTF President Choue received the highest order from the Honduran president.