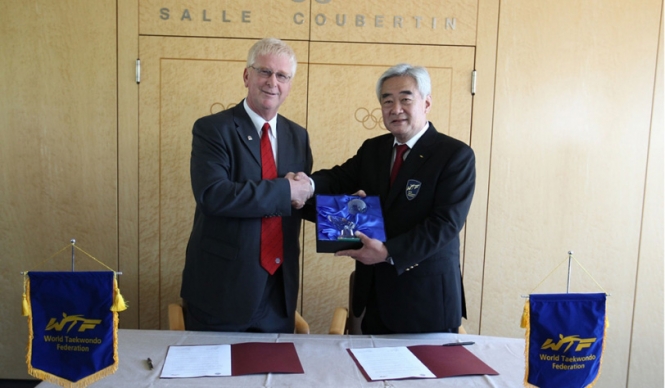 The World Taekwondo Federation continues its efforts in promoting and sharing the Paralympic and Para-sport values of courage, determination, inspiration and equality. The sport has begun to expand its initiatives in developing its para-athlete programs.

Just before a WTF Extraordinary Council meeting at the IOC Headquarters, the WTF signed MOUs with the Cerebral Palsy International Sport and Recreation Association (CPISRA) and the International Sport Federation for Para-Athletes with Intellectual Disability (INAS).

The signings that took place on June 7, 2013 aim to develop new disciplines of para-taekwondo, focusing on taekwondo poomsae (a series of postures and movements of the technical forms of taekwondo skills).

“I am proud to announce that the WTF signed MOUs with the International Sport Federation for Para-Athletes with Intellectual Disability and the Cerebral Palsy International Sport and Recreation Association to work together to include new competitors and disciplines into Para-Taekwondo.

“Para-taekwondo is fast becoming a popular sport globally and it is testament to how far the sport has spread since the inaugural World Championships in 2009 that the 59 medals handed out at the tournament were distributed amongst 20 different countries.”

In the MOUs, the WTF and both organizations agree:

·To conduct audits among its members to find out the interest for and number of athletes practicing Para-Taekwondo.
·To cooperate for the establishment of specific classification and competition rules for Para-Taekwondo.
·The WTF agrees to promote Para-Taekwondo for athletes with cerebral palsy or intellectual disabilities among its 204 Member National Associations.
·Para-Taekwondo for athletes with cerebral palsy or intellectual disabilities should be included as an INAS- and CPISRA-promoted event in the 5th WTF Para-Taekwondo Championships to be held in 2014.
·The WTF will actively work to fulfill all requirements to become a CPISRA and INAS members and recognized sport and to be included on the program of the World Games and Global Games.
·CPISRA, INAS and WTF agree to work for the inclusion of Para-Taekwondo in the Paralympic Games.

On the new partnerships with CPISRA and INAS, Secretary General Jean-Marie Ayer added:

“Organizations such as INAS and CPISRA provide extraordinary pathways towards sport for those who have intellectual and neurological differences. I believe our next steps are working with both of these great new partners to develop grass-roots programs to nurture new disciplines within taekwondo.”