MONTREUX, Switzerland (May 19, 2016) – During the opening ceremony of the European Taekwondo Championships which is held on May 19 – 24 at Salle omnisports du Pierrier in Montreaux, Switzerland, a number of athletes were honored with appointments as WTF and Taekwondo Humanitarian Foundation (THF) Ambassadors.

The two-time European Champion Aaron Cook; Olympic gold medalist at London 2012, Jade Jones; and Raheleh Asemani were appointed as THF Athlete Ambassadors. These ambassadors will be working together with the THF and WTF to give dreams and hopes to the young refugees through taekwondo.

Lisa Lents, a former Miss Denmark, and a former European Championships gold medalist, qualified WTF International Referee and former National Coach of Iceland was appointed as a WTF Goodwill Ambassador. She will be working for the promotion of taekwondo among young women and promoting the value of taekwondo to young women leaders. 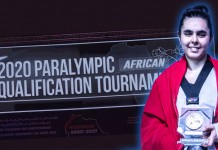