SAMSUN, Turkey (September 17, 2015) – WTF President Chungwon Choue’s office in the federation’s Seoul is packed with souvenirs, gifts and treasures from world leaders and sports officials, ranging from congratulatory plaques to a West Point cavalry sabre to a family of faux lions.

Now, a new and very special gift will take pride of place in this room.

That special gift is a rectangular embroidery of hand-stitched flowers, presented to the WTF president on the sidelines of the 6th World Para-Taekwondo Championships in Samsun, Turkey.

The presenter? None other than Ukrainian para-taekwondo wunderkind Vika Marchuk.

“I really appreciate Dr. Choue because he did so many things for para-taekwondo,” said the diminutive Ukrainian para-athlete. “He has put so much energy into it.”

Having suffered an extraordinarily hard life as a result of her disabilities – she was abandoned as a baby and raised in an orphanage – para-taekwondo has proven a boon to Marchuk. She has won three golds at world para-taekwondo championships, and took silver in Samsun. As a result of her sporting achievements, she has been given an apartment and a stipend by a grateful government.

Making the gift particularly precious is the amount of painstaking work that went into the stitching: Vika has only four fingers on her right hand. Asked how long it had taken her to complete the embroidery – which is her hobby – Marchuk said, “About three weeks; some days I did five hours on it, some days, twelve hours.”

Remarkably – even though he became WTF president in 2004 – Choue had never received a personal present from an athlete.

“I will put it up in my office,” said Choue. “Everyone who comes in, I will say,‘This is the most prestigious gift I ever received.’” 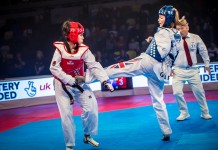 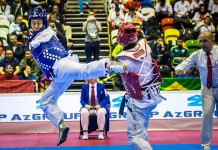 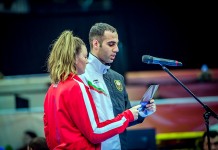