At the 6th International Symposium for Taekwondo Studies, Bach presented Choue with an IOC Trophy. Imploring all present to “join the fight for Olympic values worldwide” he said he was making the award “in recognition of the contribution your president is making.” The title of the award was fitting for taekwondo, Bach said: “The Sky is the Limit.” 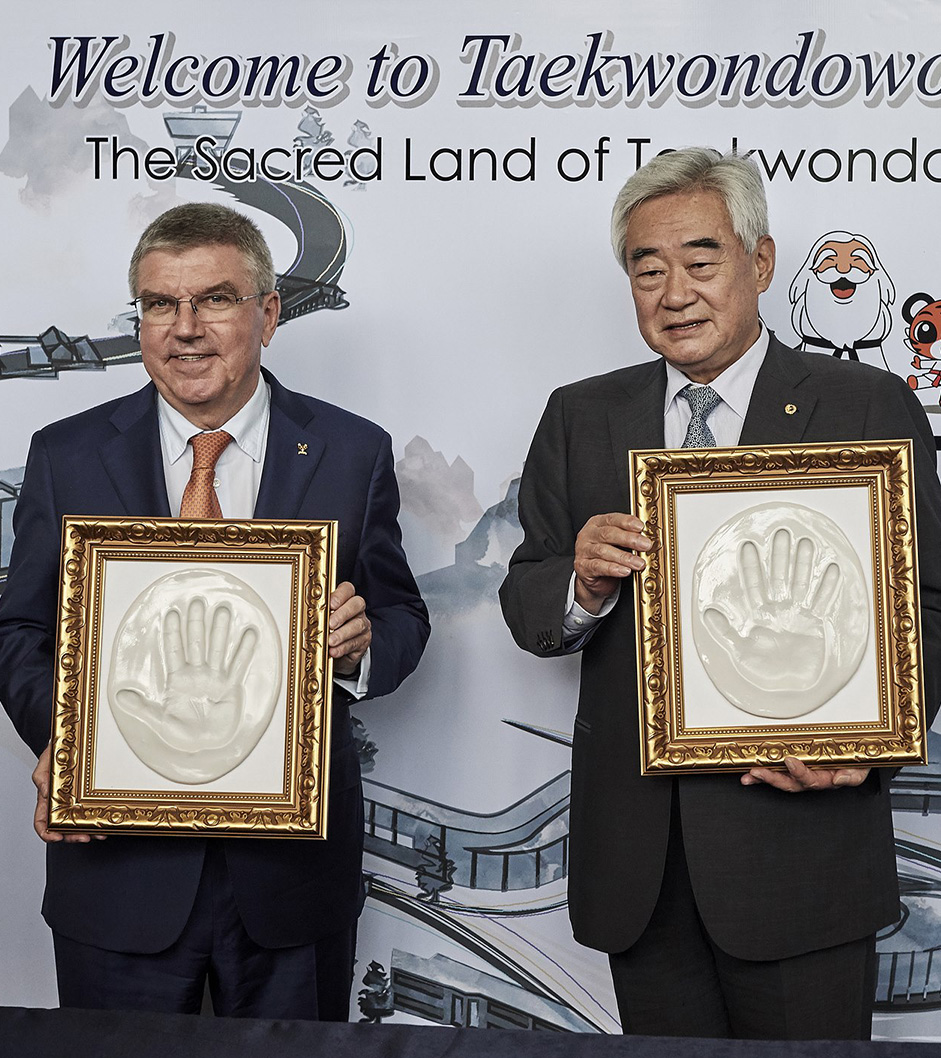 Bach and Choue then donned dobok and, together with other VIPs and IOC members, smashed boards on which were inscribed various social and sportive ills including corruption, match fixing, illegal gambling and doping. The two then left their hand prints for Taekwondowon.

Following a short visit to the Taekwondowon Museum, Bach paid his respects to a memorial for athletes who have passed away recently, set up at the entrance to the championship venue. “That is a very good gesture to honor these young athletes,” Bach, who was visibly moved, said. “It is good to keep their memory alive.”

Bach and Choue then held a press conference. Choue noted that after Korean President Moon Jae-in visited the championships’ Opening Ceremony, and around 10 IOC members were present during the seven-day event, it was a final honor to welcome the IOC president to final day and to the Closing Ceremony this evening.

Bach congratulated World Taekwondo on its championships, saying that taekwondo and Olympism “share the same values” and that it is critical to defend these values, which are under attack around the worldwide.

He added that it was “great to see how global taekwondo has become in recent years, developing from a national sport to a global sport.” There are 183+1 World Taekwondo Refugee Teams represented at the championships, and 26 countries have won medals so far. He also commended World Taekwondo for the changes being made to the game to make it more transparent and exciting.

Bach praised World Taekwondo for its academic symposium and inclusion of refugees, noting that it was the first International Federation to invite refugee teams, and one refugee had participated in the championships. In regards to its humanitarian programs assisting refugees in camps around the world with training, he said that World Taekwondo was “setting a great example.”

Asked about World Taekwondo – International Taekwondo Federation discussion during the seven-day championships, Choue said that the WTF had obtained a verbal agreement form the ITF delegation to perform a reciprocal demonstration during the ITF World Championships to be held in Pyongyang, North Korea, this September.

The ITF Demonstration Team performed at the WTF 2015 World Taekwondo Championships in Chelyabinsk, Russia, and also at the opening ceremony in Muju 2017. The ITF will perform again, alongside the WTF Team, at the Closing Ceremony this evening.

Choue added that the two federations were discussing a joint demonstration at the upcoming Pyeongchang Winter Olympics in South Korea in 2018. However, this initiative had to be further discussed with the IOC and the Pyeongchang Organizing Committee, he said.

Bach will remain in Muju today, where he will watch matches in the afternoon and the championships’ closing ceremony in the evening.

The 2017 World Taekwondo Championships are the largest ever, with 183 nations and one refugee athlete competing. They are being held at Taekwondowon, the world’s largest dedicated taekwondo-training facility, in Muju, in southwest Korea. 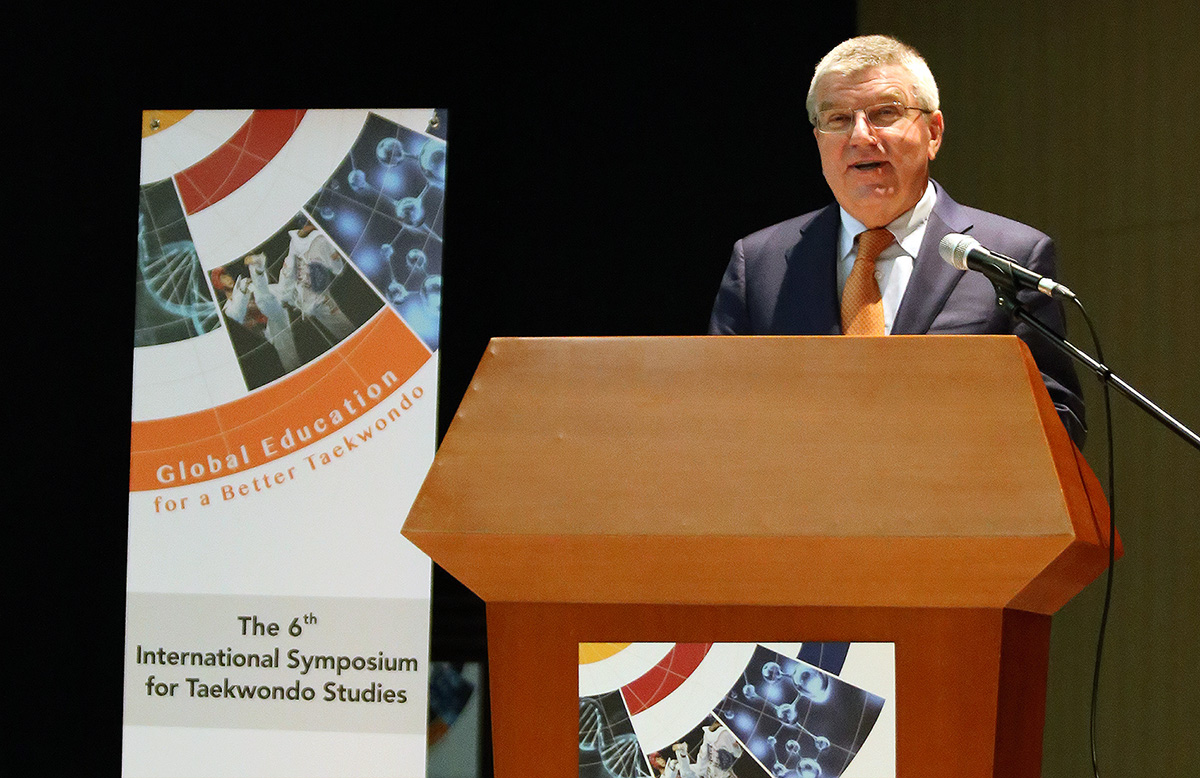 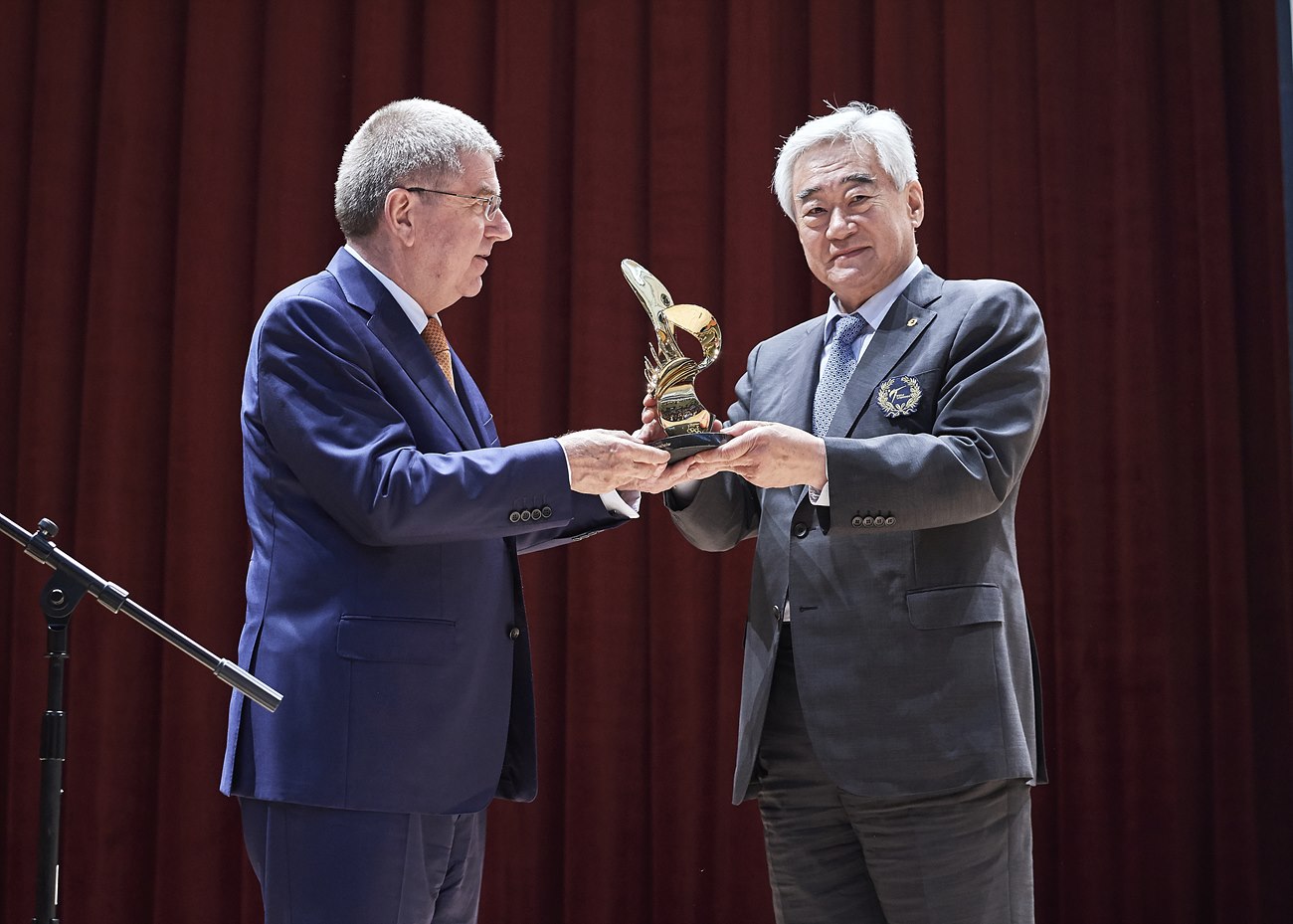 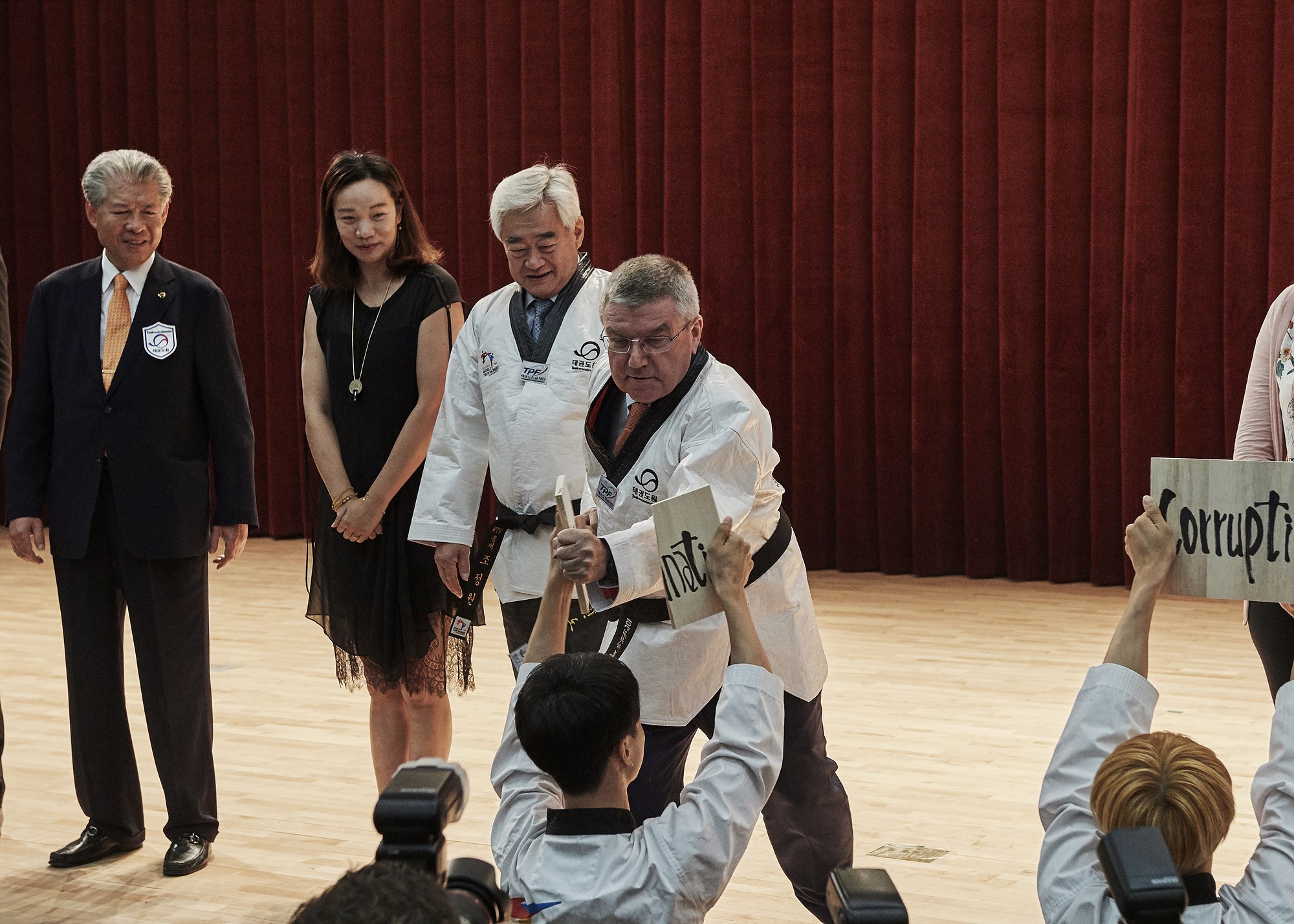 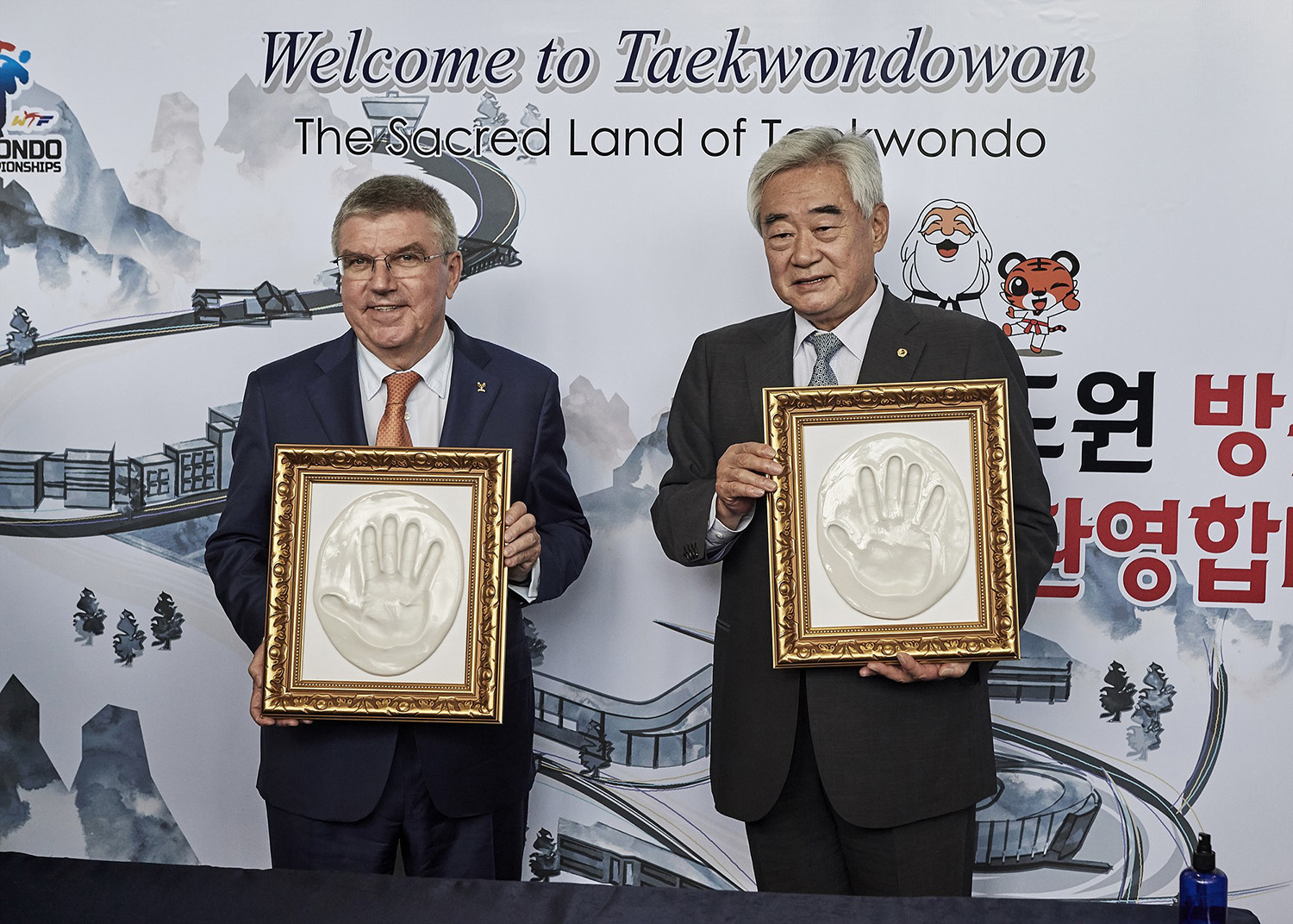 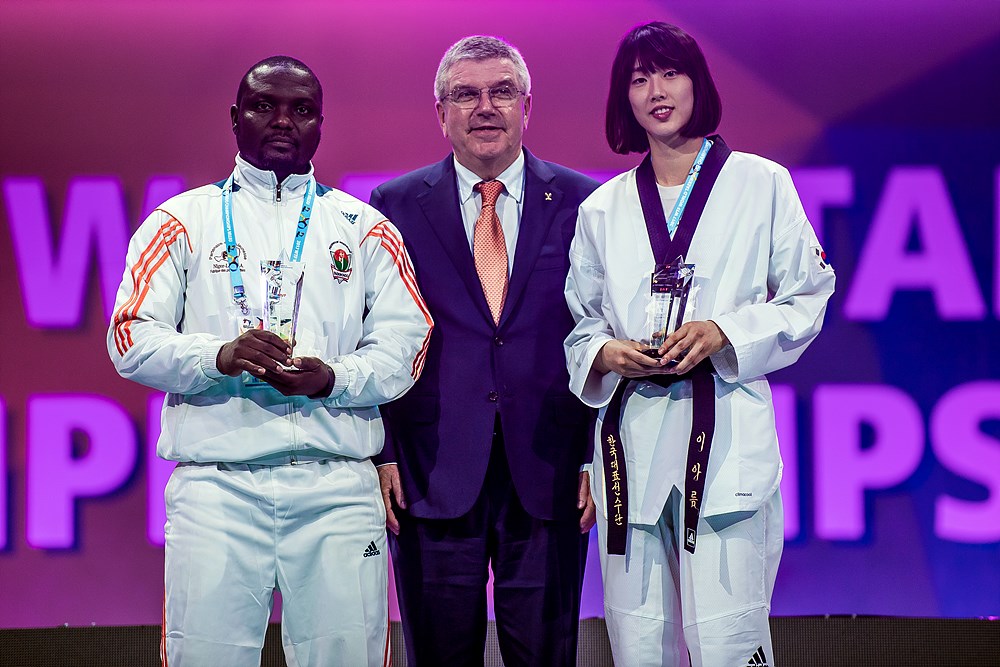