WUXI, CHINA (Dec. 14, 2018) –  The third day of the Wuxi 2018 World Taekwondo Grand Slam Champions series saw taekwondo stars progress to the semi-finals after a scintillating round of quarter finals.

Taekwondo athletes in all eight categories now know their semi-final fate after progressing through from the quarter finals, which threw up some surprise defeats.

The men’s -58kg category saw number one seed Tae-hun Kim of Korea convincingly overcome Tawin Hanprab of Thailand 2-0 to set up a semi-final fight with Yushuai Liang of China. Crowd favourite, Liang narrowly beat number four seed and Roma Grand Prix champion Mikhail Artamonov of Russia in a golden point round, in what was the first shock result of the day. The second semi-final will be fought between number two and three seeds, Jun Jang of Korea and Armin Hadipour Seighalani of Iran after both convincingly progressed with a 2-0 win. Seighalani eased past Ramnarong Sawekwiharee of Thailand, whilst Jun Jang overcame Xiaoyi Chen of China.

The first quarter-final of the men’s -68kg category saw pre-tournament favourite Dae-Hoon Lee of Korea beat Vladimir Dalakliev of Bulgaria 2-0. Lee will now face number five seed Bradly Sinden of Great Britain, after Sinden beat Hakan Recber of Turkey 2-0. In a scintillating golden point round Javier Perez Polo of Spain knocked out number three seed Yu-Jen Huang of Taipei, much to the shock of the crowd. Perez Polo will test his skills against number two seed Shuai Zhao of China. Zhao had the backing of the crowd, as he also had to overcome a dramatic golden point round in his quarter-final against Dong-yun Shin of Korea.

Number one seed Maksim Khramtcov of Russia survived a scare against Nikita Rafalovich of Uzbekistan in the first quarter-final of the men’s -80kg. The fight went to a golden-point round, but it was Khramtcov who landed the winning blow. He will now face Linglong Chen of China in the semi-finals. Chen had a much smoother quarter-final, as he beat fellow Chinese star Ke Ren 2-0. The second semi-final will be fought between number three seed Hwan Namgoong of Korea and number seven seed Milad Beigi Harchegani of Azerbaijan. In another breath-taking golden point round, Namgoong overcame Icaro Migel Soares of Spain, in what was one of the fights of the tournament so far. Furthermore, Harchegani convincingly overcame number two seed Jiannan Huang of China 2-0.

In the men’s +80kg category, Kyo-don In was given another bye, as his proposed opponent, Dmitriy Shokin of Uzbekistan had to withdraw through injury. In, yet to fight, will now face Hongyi Sun of China in the semi-finals after Sun defeated Lutalo Muhammad of Great Britain 2-0. In yet another shock result, number three seed Gil-young Byeon of Korea was knocked out by Sajjad Mardani of Iran. Mardani will now face Zhaoxiang Song of China. Song defeated Anthony Mylann Obame of Gabon in his quarter-final. 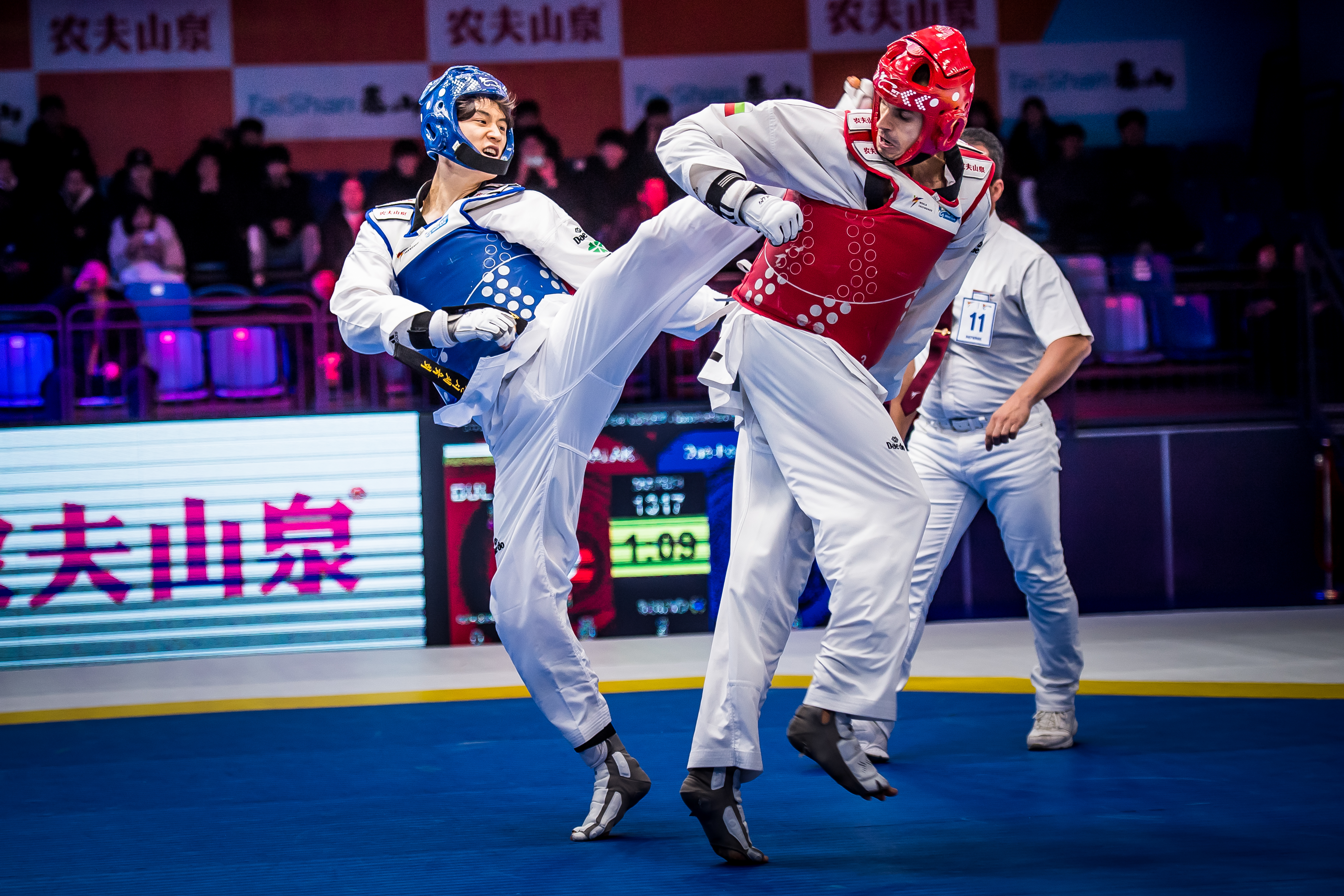 Number one seed So-hui Kim of Korea was knocked out of the tournament by fellow Korean and ninth seed Min-Ah Ha, after Ha landed the winning blow in the golden point round. Ha now comes up against Xueqin Tan of China in the semi-finals, after Tan beat Jae-young Sim of Korea 2-0. Number three seed Bora Kang saw off Napaporn Charanawat of Turkey 2-0. Kang will face number two seed Panipak Wongpattanakit of Thailand in the semi-finals. Wongpattanakit convincingly overcame Yuntao Wenren of China 2-0.

In the women’s -57kg, number one seed Irem Yaman of Turkey was knocked out by Marija Stetic after Stetic won the fight 2-0. Number four seed Jade Jones will match up against Stetic in the semi-finals, after she also won her quarter final against Zongshi Luo of China 2-0. Number three seed Lijun Zhou of China also progressed to the semi-finals by beating Hatice Kubra Ilgun of Turkey 2-0. Zhou will face Ah-Reum Lee of Korea in the second semi-final. Lee beat Nikita Glasnovic of Croatia 2-0 in her quarter.

Bianca Walkden of Great Britain has booked her place in the semi-final after she beat Chen Li of China 2-0. Walkden will fight Aleksandra Kowalczuk of Poland after she also won her quarter final against Huan Wang of China 2-0. Number three seed Jackie Galloway of USA was beaten by fellow countrywoman Madelynn Gorman-Shore 2-0. The number six seed will take on Rebecca McGowan of Great Britain, who also pulled off a shock win against number two seed Shuyin Zheng of China.

Tomorrow, the triumphant athletes will compete in their respective semi-finals.