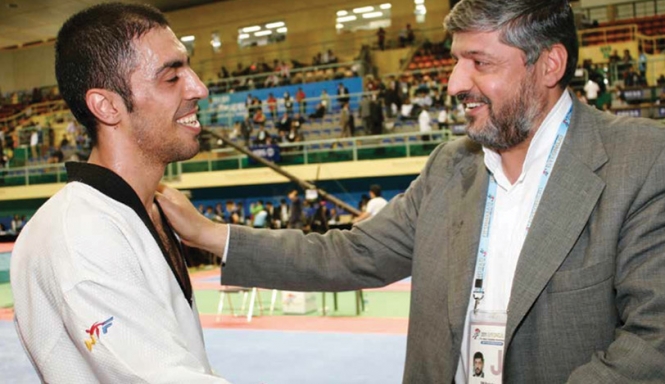 Taekwondo has seen its popularity explode in Iran. Here is how it happened.

Iran’s first introduction to taekwondo was in the early 1970s when the Islamic country’s military and police started practicing the Korean martial art. In 1975, Iran became a member of the World Taekwondo Federation.
Today, with a taekwondo population of about 2 million and about 5,000 taekwondo gyms, Iran is one of the top global taekwondo powers.
The country has so far taken home eight Olympic medals, includ- ing two golds, as well as 164 medals at the World Taekwondo Championships. In recent years, Iran has overtaken Korea to clinch the men’s overall titles at major taekwondo championships. At the 2011 World Taekwondo Championships in Gyeongju, Korea, Iran won three gold medals, one silver and two bronzes for the overall men’s title. Korea came next with two golds and two silvers.
Behind the remarkable development of taekwondo in Iran are Korean Grandmaster Shin-chul Kang and Seyed Mohammad Pouladgar, president of the Iran Taekwondo Federation.
There were a mere 30,000 taekwondo practitioners in Iran in 1985 when Master Kang first came to the Islamic country as an instructor. Kang served as the head coach of the Iranian national team from 1985 to 1995. Since 1996, Kang, a ninth dan black-belt holder, has worked as chairman of the Iranian Technical Committee. From 2006, he has also served as the head coach of the Iranian National Poomsae Team.
“In June this year we will celebrate the 30th anniversary of Grandmaster Kang’s arrival in Iran,” said Pouladgar, who has served as president of the Iran Taekwondo Federation since 2001. In January this year, Pouladgar was re-elected to the four-year post for the fourth time.
Pouladgar, who started taekwondo at the age of 16 and holds a seventh dan rank from the Kukkiwon, said that he is placing top priority on the technical advancements of Iranian athletes in order to ensure good results at the next Olympics.
“The more medals we win at the Olympic Games means the more power and support we win from our government,” he said. “To at- tain this goal, we will strengthen our education for athletes.”
In cooperation with the WTF, Iran established the World Tae- kwondo Center in Tehran in May 2010, which serves as a WTF-designated Regional Training Center. Built on a 724 sq.-meter area, the four-floor center is equipped with a hotel, a gym, a training room with four courts, and a medical clinic.
“The purpose of the center is to help enhance taekwondo skills in Iran and nearby countries,” said Pouladgar, a member of the six-member Executive Board of the Iranian Olympic Committee. He worked as a WTF Council member until 2013.
In 2010, Iran opened a two-year taekwondo university next to the World Taekwondo Center. The university is made up of five classes, and various departments for management, education and research and cultural affairs. The first commencement ceremony of the university, which was changed into a four-year school starting this year, was held in June 2012; 35 students graduated. After five years of operation, 410 students have been trained at the university, with 150 of them winning associated degrees and 70 studying for bachelor degrees. For the first semester of 2014, 70 students have been admitted.