WUXI, China (Jan 6, 2018) – A highly entertaining second Saturday of the super-elite World Taekwondo (WT) Grand Slam 2017/18 series, which pits the best twelve athletes in each Olympic weight category against each other, took place today, with athletes competing in the Female -67kg and male -68kg categories.

In the unpredictable female competition, third seed Ruth Gbagbi of Cote d’Ivoire came out on top after impressively defeating dark horse Yunfei Guo of Team China in the final by 10:6. The Rio 2016 bronze medallist has been in excellent form recently and her fearsome, all-guns-firing combat style proved to be too much for her opponents again today. On her way to the final, runner-up Guo beat number 1 Seed and Rio 2016 Olympic Champion Hye-ri Oh (Team Korea), taking home USD20,000 in prize money. Oh secured the bronze medal and USD10,000 prize money. 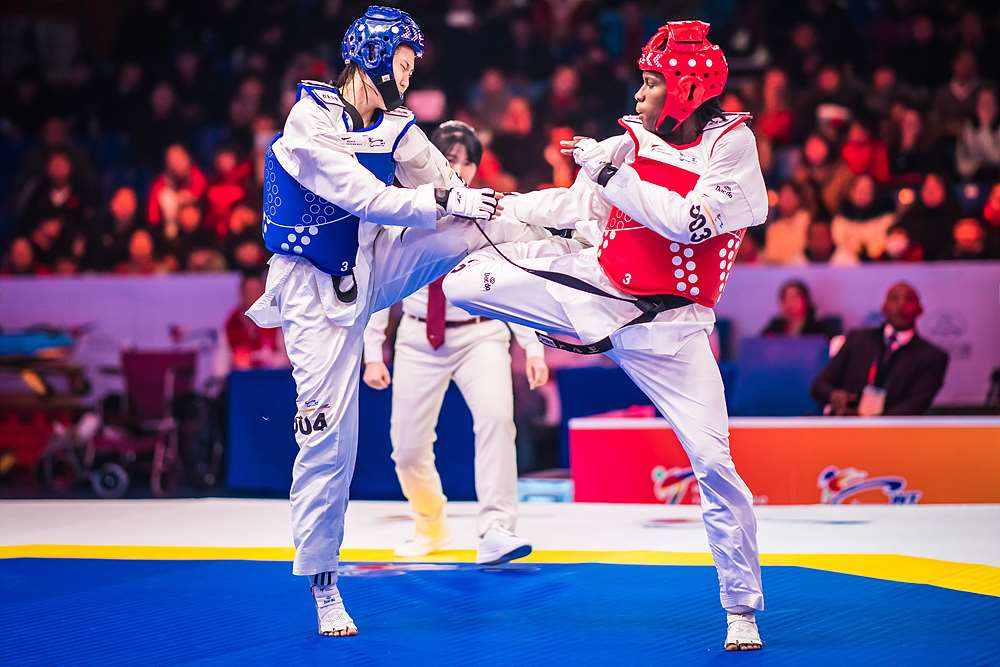 The day was filled with high-quality action and produced a number of interesting moments, including the first knock down points (one of the new rule changes) made during the W-67kg’s bronze medal contest between Oh and Mengyu Zhang of China, providing added entertainment for the crowd. Another modified rule was seen today, with an additional 5 points awarded when the referee counts for a knock down.

“The second weekend of this year’s Grand Slam series was a huge success. As we continue to tell the stories of elite players through this highly competitive event, we are also creating a more media-friendly, spectator-centric sport. There were some amazing performances today, with a number of stars born.

“I look forward with great anticipation to the next two editions in the coming weeks, and would like to take this opportunity to thank the impeccable Wuxi Organizing Committee for its hard work and dedication in hosting this event.”

This year is the inaugural Grand Slam tournament, which is set to take place each year from now on. The series consists of eight separate tournaments (two per Saturday over four Saturdays) to represent each Olympic taekwondo weight category (four female, four male). The series is invitational, and brings together 12 premier athletes in each weight category.

For the 2017/2018 Grand Slam, the invited athletes in each tournament/category include the Rio 2016 Olympic gold medallists, and two gold medallists from the 2017 World Taekwondo Championships (the world championships feature twice as many weight categories as the Olympics). The champions of the Grand-Prix Final from December 2017 are also invited, as are the three winners of the Grand-Prix Series held earlier in 2017 and the winner of the 2016 Grand-Prix Final.

If any of the above overlaps or any player drop out, the top eight will rounded out with the next player(s) in the WT Olympic rankings. In addition, the host country receives one wild card and the last three athletes in each tournament will be selected in a pre-Grand Slam qualification tournament. These last three athletes could come from other combat sport disciplines or any other styles – though in the qualification tournament and in the Grand Slam series, they will have to fight under World Taekwondo rules.