(July 29, 2016) – It is a perennial truth among combat sports: Be it boxing or be it mixed martial arts, the media and the punditry are always focused on the male heavyweights.  And so it is with taekwondo – but in taekwondo, the Male +80kg category is a category in flux. In Olympic taekwondo history, Korea won three gold medals in this category in Sydney, Athens and Beijing, but was dethroned in London by Italy’s Carlos Molfetta. Yet Molfetta failed to qualify for Rio.

Given the absence of the previous Olympic heavyweight champion, the man to beat in Rio 2016 is very clearly Uzbekistan’s Dmitriy “Shock Force” Shokin. Though he only has a short record in elite WTF competition, his star has risen fast: He won gold at the Asian Taekwondo Championships at Tashkent in 2014 and went on to dominate the 2015 fighting season. He seized gold at the World Taekwondo Championships in Chelyabinsk and two golds in the year’s Grand Prix series, in addition to a range of Open wins. He has been the number one ranked fighter in the category since April 2015.

Although not tall for a heavyweight, Shokin is built like a battleship: the shock power of his strikes impacting his opponents’ body armor is audible even from the rearmost seats of stadia. He admits he is not the most stylish of the fighters, but has excellent balance and lightning reflexes. Although he is not a master of footwork, he dominates the center of the mats, where his spinning back kick can be used to best advantage.

Despite his formidable physical presence, Shokin is one of the most modest athletes in the game and was at the center of an unfortunate situation on the road to Rio. His friend, team mate, taekwondo senior – and the number two ranked heavyweight in the WTF – Jasur Baykuziyev, was unable to qualify, on the basis that there can be only one athlete from each nation in each Olympic category.

The number three heavyweight, by ranking, is Azerbaijan’s Radik Isaev. Taller and leggier than Shokin, he cancels out many of Shokin’s advantages. He also beat Baykuziyev to take the gold at the 2015 World Taekwondo Championships in Chelyabinsk. Azerbaijan has invested heavily in taekwondo in recent years, granting Isaev significant backup – but also piling on the significant pressure. 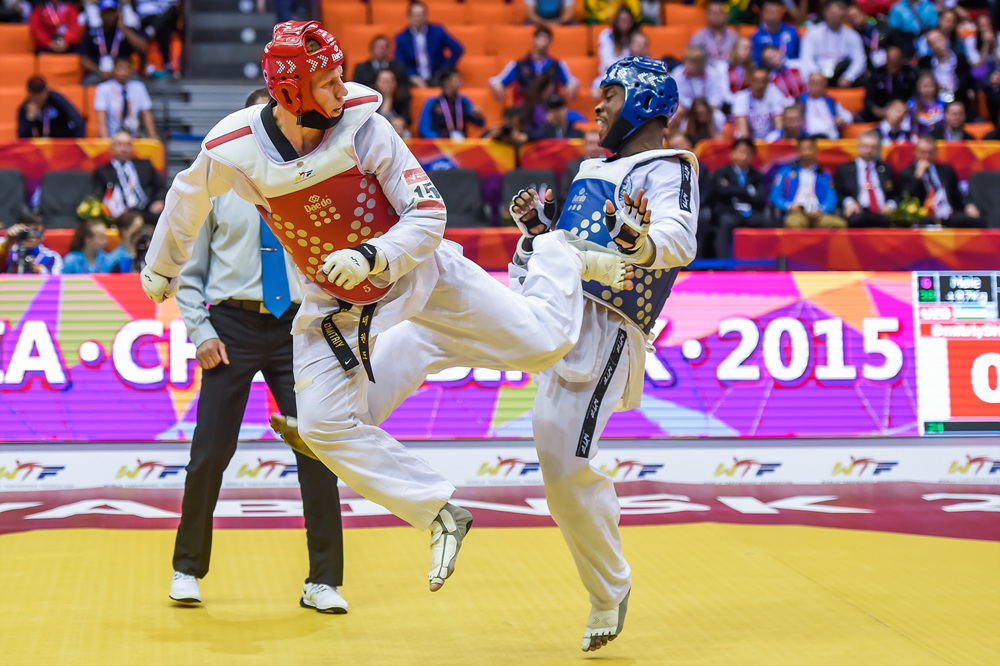 Another stern challenger is Sajjad Mardani of the ever-formidable Iranian Team, the fourth-ranked player. He has been fighting at world-class level since 2012, and in the last big event of the 2015 season, the Grand Prix Final in Mexico City, won gold. He has fought Shokin three times, winning twice and losing once.

Trailing Mardani in fifth place of the rankings is one of the best-known fighters in taekwondo is Gabon’s Anthony Obame. The African delighted his country and amazed the world by winning silver in London in 2012. He followed that by winning gold at the 2013 World Taekwondo Championships in Puebla, and in 2014, seized yet another gold at the Suzhou Grand Prix. However, having suffered injury, he made little impression on the 2015 season. While his quality, experience and power are beyond question, questions must hang over his current form.

Behind Obame is France’s M’bar N’Diaye. An interesting fighter, N’Diaye is armed with a range of flamboyant techniques, but in recent competitions, has been playing a cagier, tactical game.

Seventh-ranked Dong-min Cha is a highly experienced – he has three times been chosen to wear Team Korea’s colors in the Olympic Games and won the category in Beijing 2008 Olympic Games. He also boasts the technical excellence expected of Korean taekwondo players, but his recent record has been spotty. After suffering a long slump, he burst back into the top ranks at the 2014 Grand Prix Final in Queretaro, where he took gold. Even so, his Olympic appearance was not guaranteed as he was ranked seventh at the end of the season; only the top six won automatic Olympic slots for their NOCs. However, as Baykuziyev could not take the spot due to Shokin’s presence, Cha squeezed in.

Another fighter to watch who did not win a slot via Olympic ranking but won an NOC ticket for Rio at the Continental Qualifications for Rio Olympics is Team GB’s Mahama Cho.  From 2009, he participated in and won many Opens, but first entered the global spotlight in top-level competition when he captured gold at the inaugural Grand Prix Final on home turf in Manchester in 2013. That made him a sudden star. Tall and flexible, his arsenal includes a wicked ax kick, head kicks and a powerful punch.

The men’s heavyweight category will be the last category to be fought over in Rio. It should provide a fitting ending to the competition.