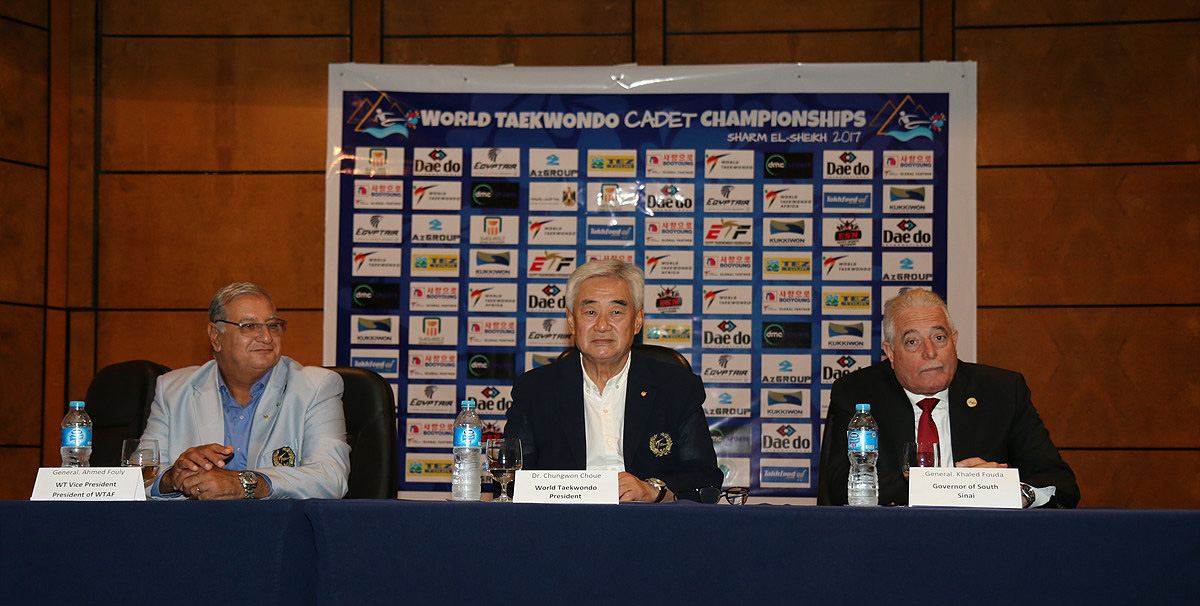 SHARM EL-SHEIKH, Egypt (August 23, 2017) – The 2017 World Taekwondo Cadet Championships are set to begin later today as 420 young athletes from 46 countries gathered at the resort city of Sharm El-Sheikh in Egypt for one of the premiere events in the taekwondo family’s youth calendar.

At the event’s opening press conference, World Taekwondo (WT) President Chungwon Choue praised the facilities of the Youth and Sports Olympic Hall, and said he looked forward to the four days of competition.

“This is my third visit to Sharm El-Sheikh and it is always pleasant to be in this beautiful city. I have no doubt that we will have a successful Cadet Championships here in Egypt,” said Choue.

Governor Mohamed said: “We are pleased to host the World Taekwondo Cadet Championships in Sharm El-Sheikh. This is a safe and peaceful city and we are always ready to hold any mega big events.”

The event, which is for the youth aged between 12 and 14 years old, is another opportunity for the world to unite through taekwondo, with organizers able to promote WT’s core values of respect and peacebuilding throughout the four days of competition. It also provides an excellent opportunity for Egypt to host another global taekwondo event, following the success of the 2012 World Junior Championships.

Speaking at the press conference, President Fouly said: “I would like to praise the Egypt Taekwondo Federation, which has worked very hard in preparation for the championships. I would like to thank Governor Mohamed and WT President Choue and all the participating athletes, and officials for visiting Sharm El-Sheikh. I also thank all the volunteers and hope they go back with good memories.”

The 2017 World Taekwondo Cadet Championships begin on August 24 and conclude on August 27.