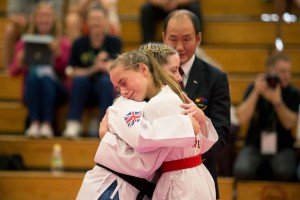 An emotional Francesca Pivaro won the first gold medal of the CPISRA World Games 2015 here in Nottingham this morning. She was competing in the first ever P30 classification Para-Taekwondo World Championships. The event attracted five competitors, one from Australia and the remainder representing Great Britain, marked by a panel of five international judges.

The format had each competitor perform two semi-final rounds and then a further two rounds in the final. Each are scored by accuracy, out of six, and presentation out of four. The two scores were then added together and their average used to determine the final medal placings.

The female competition was contested by GB athletes Samantha Carrington and Francesca Pivaro. The scoring was close throughout but higher accuracy scores edged Francesca to the P34 gold medal position. Alongside her silver medal in this class, Samantha also won gold in the P33 class. 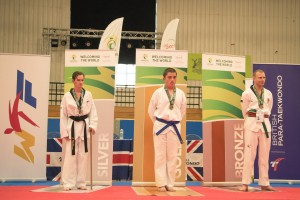 The male competition was again a tight contest between two GB athletes. Ben Savage and Kent Smith, along with Australian Nick Riches. In the P34 class, Ben scored consistently higher and took gold. Silver was won by Kent with Nick taking the bronze. As in the female competition, medals were awarded for the P33 class to Kent (gold) and Nick (silver).
The Spirit of the Games Award for Para-Taekwondo was presented to Nick Riches. This award, sponsored by Nottingham Trent University, is given to the athlete in each sport who embodies the spirit and the values of the Games and their sport.
You can find full details of the results below:
Para-Taekwondo – Results