First, I applaud all our MNAs on the extreme efforts they have exerted.
Looking back on 2015, the first item was the launch of the pilot program of the World Taekwondo Federation in Jordan. This organization sends a positive and powerful message to the world and to each other: We represent a truly great sport.
Another development was the WTF’s Continental Union constitution, which is currently being drafted. In addition, a complete restructuring of the WTF office was implemented and the WTF website underwent a complete makeover. Extensive work was also invested in the GMS global license project, with easy-to-follow registration guidelines in eight languages.
These are just a few of many achievements of the WTF last year.
Turning to the AFTU and our own achievements: We successfully organized the 2nd Luxor Open 2015, the 1st AFTU Open 2015 and the highlight of last year’s events – the All African Games, in Brazzaville, Congo in September 2015. These Games had the highest number of participating countries ever – 26 – as well as the largest ever number of participating athletes – 245.
Moreover, Africa won three tickets to Rio through the 2015 Grand Prix series. Cote d’Ivoire qualified with one male player; Gabon with one male player; and Egypt with one female player. Sixteen more African athletes won quota places at the African Qualification Tournament in Agadir, Morocco, over February 6-7, 2016. We will also be holding the 3rd Luxor Open in Luxor, Egypt, over March 2-4, 2016.
So, let’s make 2016 a great Olympic year!

To begin with, permit me to say a very big “thank you” for your support and contribution as we continue taekwondo’s progress on the road to making it one of the most popular sports in the world.
In 2015 we held our 1st Asian Para-Taekwondo Championships, along with the 8th Asian Junior Taekwondo Championships, the 3rd Asian Junior Taekwondo Poomsae Championships, the 1st Asian Cadet Taekwondo Championships, and the 1st Asian Cadet Taekwondo Poomsae Championships, which were held successfully in Chinese Taipei in April. These events succeeded in raising the standard of taekwondo across the region.
In 2016, the ATU is working to get poomsae adopted as a new event for the 2018 Asian Games in Indonesia.
If we succeed, it will ease the path of this event into the Summer Olympics at some point in the future.
So please join me as we build consensus and press for this important step.
We are on the road to the Rio Olympic Games in 2016, and what promises to be the best-ever taekwondo event in the world’s ultimate sporting forum. I sincerely hope that the 43 MNAs representing the Asian continent will achieve optimum results through hard training, skilled combat and fair play.
As a parting word, let me say: “Genuine success comes only to those who are ready for it. So, never step back and always have courage to accept new challenges.”
I wish all ATU members a happy, healthy and prosperous year!

2016 promises to be an exciting year, but first, let me look back over the year 2015 to see what we achieved together – notably, the inclusion of taekwondo in the Tokyo Paralympics in 2020 and the incubation of the Taekwondo Humanitarian Foundation. Thanks to these initiatives, I am very proud to be part of the taekwondo family: We are doing the right things.
Turning to the ETU, we held some tremendous events in 2015, with the inaugural European Games in Baku, Azerbaijan. This means that – finally! – Europe has joined the other continents in holding its very own continental multi-sport games. We also organized, for the first time, a European Championships featuring Olympic weight categories in Russia, and a European Kids Championships for our very young youngsters. In addition, we saw major events in Turkey, Romania, Serbia and France.
In 2016 the Olympic Games present a showcase for our best athletes and I am confident that this will be a milestone for European taekwondo. But not everyone is at this elite level. We continue to organize events for all athletes. We will hold events for seniors, clubs, kids, cadets and under-21 athletes. And we will continue with our Coach Licensing program, via which we continue to educate and train our coaches. Also, we will host the inaugural WTF President’s Cup in Bonn, Germany.
On another point: In 1976, the ETU was founded so this year we celebrate our 40th anniversary. It will present us taekwondo old timers with the opportunity to look back and reminisce.
Athanasios Pragalos
President, European Taekwondo Union

2015 saw record numbers of Oceania coaches and referees undertake OTU coach and referee accreditation courses.
The 2015 Australian Open saw record numbers of countries and athletes participating in this important G2 event. 2015 also saw the first Oceania Club Championships, providing regional clubs with the opportunity to compete at the international level. Papua New Guinea hosted the Pacific Games in 2015, one of the most successful games in history. Again, record numbers of athletes and countries entered.
The OTU had been led since 2005 by Phil Coles. Phil retired from the presidency in 2015 and I took over, having, since 2005, been secretary general. Phil remains honorary president. The OTU extends their eternal gratitude to him.
No Oceania athletes qualified for Rio 2016 via the Grand Prix, but eight athletes from Australia, New Zealand, Papua New Guinea and Tonga have won places via the Oceania Qualification Tournament for Rio 2016.
In 2016 the following events are scheduled:
June 18-19 (TBC) -The Oceania WTF Presidents Cup. The OTU is currently finalizing the host nation. / July 15-17 – Australian Open (G2) in Canberra, Australia. / October 1-2 – 7th Oceania Championships in Fiji. / TBC – 2nd Oceania Open Club Championships. Date and host country to be confirmed.
In 2016 the OTU education programs for coaches, referees, judges and officials will expand. The OTU will negotiate for poomsae and para-taekwondo’s inclusion in the 2019 Pacific Games. Discussions will be held with the WTF to ensure more Oceania participation in Tokyo 2020. The 2016 Oceania Championships will see record numbers. Colored belts will also participate for the first time. And the OTU will finalize with the WTF an Oceania IR course and refresher in October.

We successfully overcame many challenges in 2015. Let me list a few accomplishments.
We initiated the PATU Intercontinental Coach Certification to educate coaches. The PATU Intercontinental Coach Certification is now mandatory for all cadet, junior, senior and poomsae coaches. The WTF is planning to initialize WTF coaching certification with PATU in 2016.
We completed 10 WTF G-ranked events, along with the Pan American Cadet and Junior Championships, Pan American Club Championships, South American Championships, Pan American Games Qualification Tournament, and of course, our bi-annual PATU General Assembly.
Prior to the Argentina Open, PATU signed an agreement with the Americas Paralympic Committee (APC) to be an official member of the APC and include para-taekwondo in the 2019 Para-Pan American Games. In July, we celebrated one of the best ever Pan American Games in Toronto, Canada. At year end, the Mexican federation organized the WTF Grand Prix finals and WTF Gala Awards. At the Grand Prix Finals, PATU qualified five athletes for Rio 2016. We also have four from Brazil, the host nation. In 2016, the Pan American Olympic Qualification Tournament will be held in March in Aguascalientes, Mexico.
Our continued communication with PASO/ODEPA and the Lima, Peru Organizing Committee for 2019 Pan Am Games initiated the inclusion of poomsae and para-taekwondo in 2019. PATU is also making strong efforts to increase our kyorugi competitions to five weight categories in 2019.
I urge all MNAs to start their preparations for this tournament immediately. As a team, I am very confident that PATU can achieve many new goals in 2016. 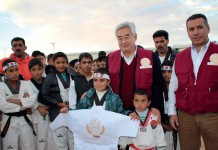 Empowering Lives: New Humanitarian Mission is ‘Good to Go’ in 2016