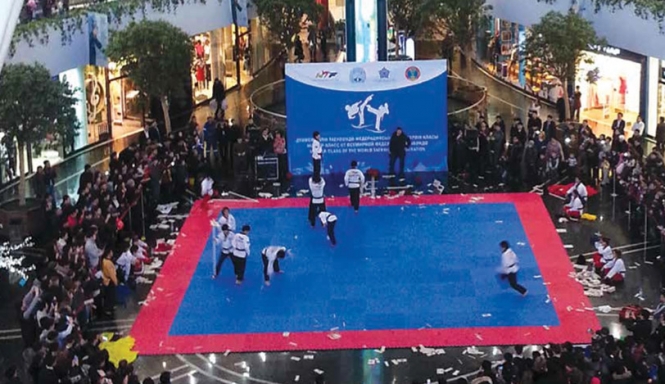 Two men have been behind the development of taekwondo in the Republic of Kazakhstan. This is their story…

Taekwondo officially came to Kazakhstan in 1991, during a period in which the young country was just starting to walk its own path. The two great people who were behind the sport’s introduction were famous far beyond Kazakhstan’s borders: Mustafa Ozturk and Bekseit Tulkiev.

There is much to say about Mustafa Ozturk. He was born in Istanbul, Turkey in 1954 to a family of Kazakh immigrants. In 1975 he entered the International University of Politics in Taipei City, Chinese Taipei, and graduated in 1980 with the qualification of journalist/ expert on international affairs.

But his main legacy is in the taekwondo field. Mustafa Ozturk won six World C hampionships and a seventh dan black belt. Thanks to his effective fighting skills, Mustafa was offered film roles in mar- tial arts movies, playing in more than than 60.

And he generously shared his mastery of the sport. When Mustafa Ozturk moved to Germany to work, he opened the “Mustafa” taekwondo school in Munich – a branch of the same school in Istanbul. Sportsmen from these schools have shown themselves great com- petitors during international matches.

In 1990 the actor, sportsman and teacher came back to his histori- cal motherland – Kazakhstan. A year later he founded the Taekwon- do Federation of Kazakhstan and popularized the martial art all over the country. In 1992, Mustafa became a citizen of Kazakhstan and in 1993, oversaw the inclusion of the Kazakhstan Federation into the WTF. In 1995, he died suddenly.

The first president of the federation was another distinguished son of the Kazakh nation: Bekseit Tulkiev. He started practicing taekwondo when the martial art was forbidden in the USSR. He was friends with Mustafa Ozturk, and managed to steer the initial impulses regarding creating a federation in the right direction. In 1995, at the 7th World Military Championships, Kazakhstan taekwondo players took the second team place after Korea, winning one silver and two bronze medals.

But Bekseit Tulkiev also left this world early: He died tragically in 1995 – the same year as Mustafa.

However by then, the sport was established. A seventh dan, Shamsat Zhaksylykovich Isabekov, picked up the baton. He is also a member of the National Olympic Committee. Thanks to his efforts, as well as the cooperation of training staff, in 2008 at the Beijing Olympiad, the federation received its first prize in the biggest event of the sporting world: A bronze medal won by Arman Chilmanov.

The federation today hopes for new victories in various tour- naments and competitions. Nowadays, in Kazakhstan more than 20,000 people are involved in taekwondo and this number is in- creasing. This means the chances of further victories are increasing, too – a bright future that the sport’s founders in Kakakhstan would like to have seen.