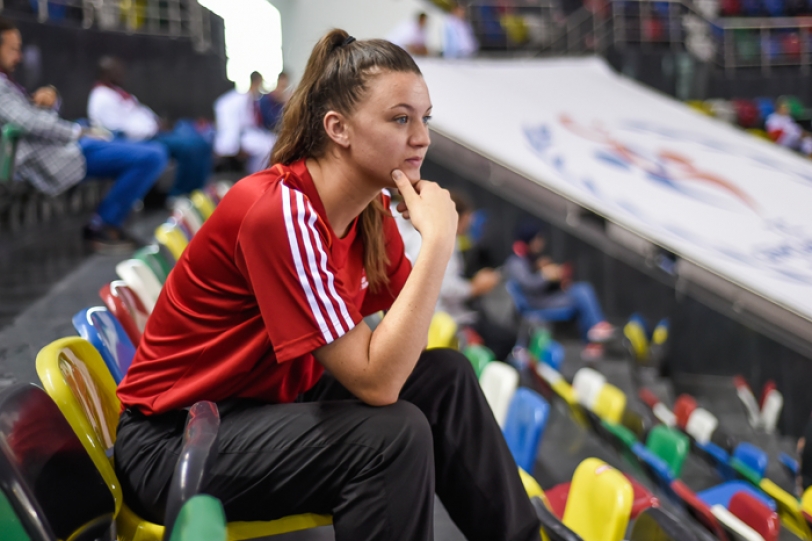 SAMSUN, Turkey (September 17, 2015) – For “weekend warriors,” taekwondo is a hobby. For competitive players, it is a demanding sport. And for a precious few, it is an all-consuming passion.

You may count GB’s Amy Truesdale among the latter.

“I started on 23rd February, 1997 – of course I remember the date!” she exclaimed when asked how long she has been practicing. “It’s my life! I have an anniversary every year for when I started taekwondo!”

Truesdale’s taekwondo journey got underway when her father, an ex-soldier, decided that self-defense would be a useful skill for his daughter to acquire, “given the world we live in.” She fell in love at first sight. “Taekwondo makes you laugh, it makes you cry,” she said. “I could not have a relationship with anyone else – they could not cope with me!”

Looking at her taekwondo schedule, one can see why. Take the month of the 2015 World Para-Taekwondo Championships in Samsun, Turkey. On the Saturday prior, she fought in the (able-bodied) British Nationals, taking gold in the -74kg category. On Thursday, she won bronze in Samsun. After flying home on the Friday, she was scheduled to drive to Scotland from her home in Chester over the weekend to take her second dan grading. The following Friday, she planned to fly out to Sochi, Russia, for the IWAS Games.

Although she has won the Para-European crown three times in the K44 +58kg division, Truesdale is one of those rare athletes who falls between the “able-bodied” and “para” slots. Her coach Peter Johnson considers her taekwondo’s answer to Oscar Pistorius, the famed South African sprinter who outran both para- and able-bodied athletes. (Johnson added mischievously, “But without the gun!”)  “You don’t want to be classed different, you want to be classed the same as able-bodied,” she said. “I am labeled ‘disabled’ now, so I won’t get onto Team GB.”

Her favored techniques are high kicks, so she laments that she can’t apply boot to face in para-taekwondo – though she concedes that this simply is not feasible. “Some people have had head injuries, so though I would like to kick to the head (in para-taekwondo), it won’t happen,” she said. “And if you don’t have arms, I don’t agree with having head shots.”

While she is a maestro of the head kick – “I am proper flexible!” she said, and proved it by holding a high round kick hovering in the air while our photographer captured it on cam – she describes herself as an all-round athlete and martial artist. “I am versatile, I like the whole thing, not just the fighting,” she said. “I like the poomsae, the leg control, practicing all the technical kicks.”

Borrowing one of her father’s army expressions – “train hard, fight easy” –  she is fully immersed.

Physically resilient and injury free, she has “basically spent the whole year competing in anything I can, any competition.” She works out every day, notably at the gym of coach Peter Johnson, dubbed “Kukki-two” (a wordplay on Seoul’s famous Kukkiwon – or “Kukki-one”). She also has a personal conditioning trainer, and practices yoga, which contributes to her awesome flexibility and balance. When she is not doing taekwondo, she is teaching others to: Her job is teaching the sport in schools.

In addition to being physically robust, she is mentally strong willed – a British taekwondo official, on hearing that Truesdale had been nicknamed “Kickarse” by a colleague, rolled his eyes, noting that she is well-known among the GB taekwondo community for her take-no-prisoners attitude. Speaking in a Beatleseque Liverpool brogue, she is also eminently quotable, with a knack for sound bytes. Asked about her disability – she was born without a left hand – she says, “Boring, eh? Everyone else here has been eaten by a shark or something!”

She says she does occasionally get negative comments about her disability –“It makes me feel a bit rubbish” – but has recently started wearing a t-shirt, rather than covering her left arm with a jacket or handbag.

And that is no bad thing because a t-shirt showcases Truesdale’s athletic physique – the “slim/strong” body of the elite taekwondo player. Alas, her dedication to the sport that has granted her that enviable physique has not done her love life any favors. “She has lost a few boyfriends to taekwondo,” said Johnson. She admits to having a crush on Moldovan taekwondo superstar Aaron Cook, but, when discussing her romantic prospects, laughed them off, saying, “I am 27 now – I am off the shelf!”

She recalls hearing the news about para-taekwondo’s inclusion in the Tokyo Paralympics: A BBC correspondent telephoned her and told her. “I was like, ‘Are you serious?!? Woooaahh!’ Then I went quiet and tried to process it.”  Truesdale will be 31 in 2020, but has no worries about making the grade.  “For para, if you are a bit older, it is alright,” she said. “There are no head shots, so you are not overstretching.”

Competing in the Paralympics would be the ultimate, for taekwondo has Truesdale firmly in its grip. “It is super important to me, I would not do anything if I did not do taekwondo,” she said. “If I am not teaching it, doing it or talking it, I am not doing anything.”

With the increasing reach of para-sports, she reckons that anyone disabled can take it up; all that is missing is the will to do so. “Nothing is stopping you doing it – get involved, there is enough of it out there – but don’t think you are different because you have a disability,” she said.  “My ability is stronger than my disability.” 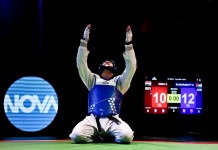 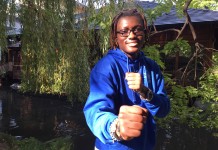