MUJU, Korea (June 22, 2017) – A bold and exciting new format that will professionalize and upgrade taekwondo’s commercial appeal and media profile was unveiled to  and approved by the World Taekwondo Council two days ahead of the start of the 2017 World Taekwondo Championships in Muju, Korea.

At the meeting, held at the Tirol Hotel and Resort in Muju, the World Taekwondo Council also approved an extra Grand-Prix to be added to the existing four-edition series over the next two years – in May, in Rome, Italy – and an annual World Beach Championships, following the success of the inaugural event in Rhodes, Greece, in May 2017.

However, the agenda item which generated the most interest was the upcoming new super-elite taekwondo series, to be inaugurated in December 2017 in Wuxi, China.

“We desperately need taekwondo stars,” said World Taekwondo President Chungwon Choue, as he introduced the thinking behind the upcoming pro-series. “We have many talented athletes, but until now, we don’t have media stars.” Moreover, taekwondo also lacks commercial muscle, Choue lamented. “Compared to boxing, our money is really nothing,” he said.

World Taekwondo Director General Jin-bang Yang then took the stand to deliver a presentation on the upcoming “Grand Slam Champions’ Series.” He noted that the most significant innovation the World Taekwondo has introduced since the 2012 London Olympics has been the elite Grand Prix series, which offers the sport’s top-ranked athletes top-level competitive opportunities, ranking points and prize money.

However, the Grand-Prix series still lacks the Hollywood-style presentation of world-class sports events, such as pro-boxing, and top-level prize money. The aim of the new series, Yang said, is to package taekwondo as a product for global TV audiences, with best-in-class sound, light, camera and pre- and post-production systems, thereby raising taekwondo’s recognition and commercial value. The investor behind the Grand Slam series is Shanghai Jijin Investment Company, which will operate the new format in the city of Wuxi.

The event, a single elimination format, will invite 12 top athletes in each of the eight Olympic weight categories, based on their championship titles; an additional wild card will be awarded to the host city. Each tournament in the series will feature just one weight category, and will be enlivened with the razzmatazz of top sports presentation, specifically packaged for global TV.

The series will offer annual prize money of USD800,000, or USD100,000 per Olympic weight category (with USD70,000 for the victor, USD20,000 for the runner up and USD10,000 for the third place winner); this marks a huge step forward for taekwondo. In addition, the top 2-3 players in the series will be offered commercial endorsements from the sponsor. The overall victor in each weight category over the three-year cycle will win an Olympic slot.

To ensure that the operation runs smoothly, the federation will establish a joint venture company with Jijin Investment to manage the Grand Slam project. In response to questions from the Council, Choue assured the Council that all appropriate legal steps were being taken; also 95 percent of the financial investment will be made by Jijin Investment.

One change was the formalization of (existing) honorary vice presidents roles. A second change was to the reporting requirements for MNAs; MNAs will also be allowed to pay their fees to the World Taekwondo in February every year, instead of the previous December, lifting a financial burden from many members. A third change was to the structure of World Taekwondo Committees, with the addition of six sub-committees in specialized areas. Committees have also been re-listed in alphabetic order.

Changes were also approved to Event Operation Rules and Ranking Bylaws, the latter being points for repechange.  Alterations to the Para-Taekwondo Competition Rules were approved for point allocations. The Council also approved new requirements for prospective international para-taekwondo referees.

The Council reviewed the federation’s financial and operational reports, and heard the latest information on updates to the Global Membership System.

Secretary General Hoss Rafaty briefed the Council on the Executive Committee meeting held earlier in the day. Rafaty asked for the broadest possible authority to be given to the World Taekwondo president to negotiate the new Grand Slam series. He also spoke about the duties of new Council members. Plans for the upcoming General Assembly and World Taekwondo elections on the 23rd were also presented

In a special agenda item, Choue presented African Taekwondo Union head General Ahmed Fouly with a special letter and black belt to give to Zein Youssef, an Egyptian boy who has successfully battled cancer. Choue acclaimed him for his courage and indomitable spirit.

Finally, the Council approved the text of a special declaration which will be made at the General Assembly on June 23. 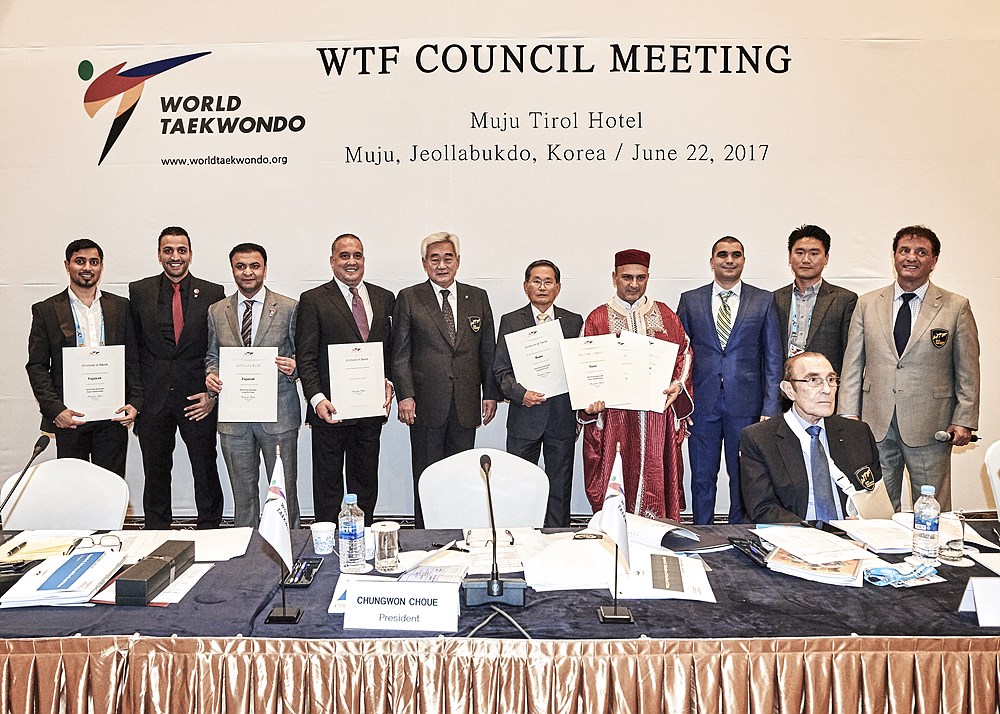