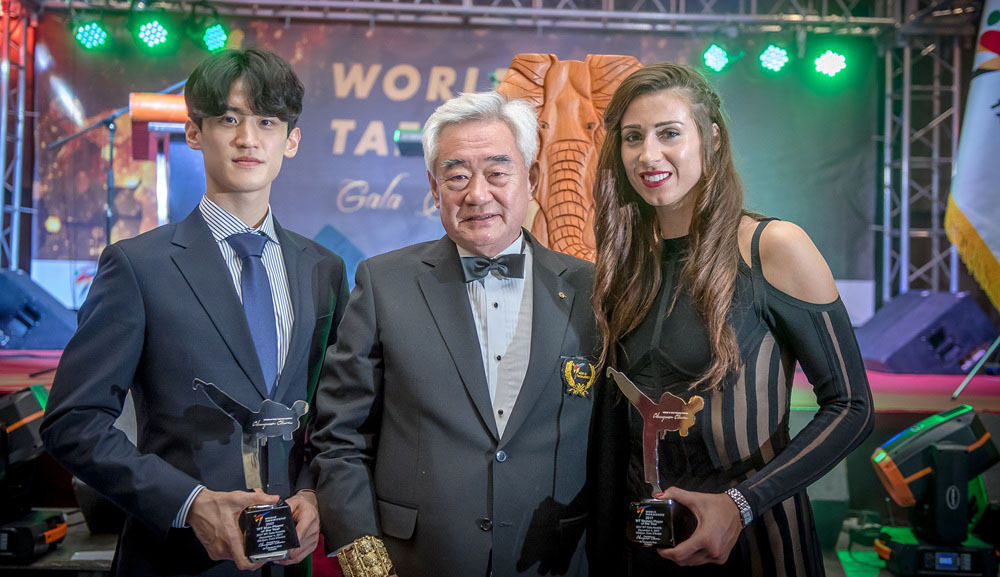 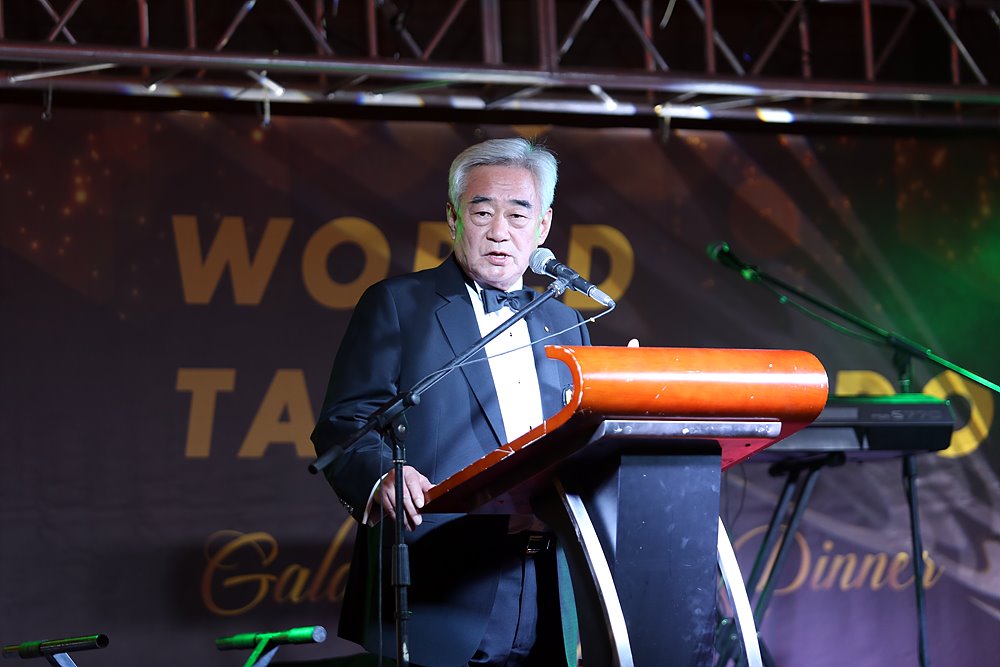 The evening offered the game’s players, coaches and referees the chance to let their hair down in black tie and evening wear against a ritzy, five-star backdrop. The dining hall was decked out in West African style, with brightly colored hangings and table wear – all rocking to the sound of upbeat tribal techno and traditional music. 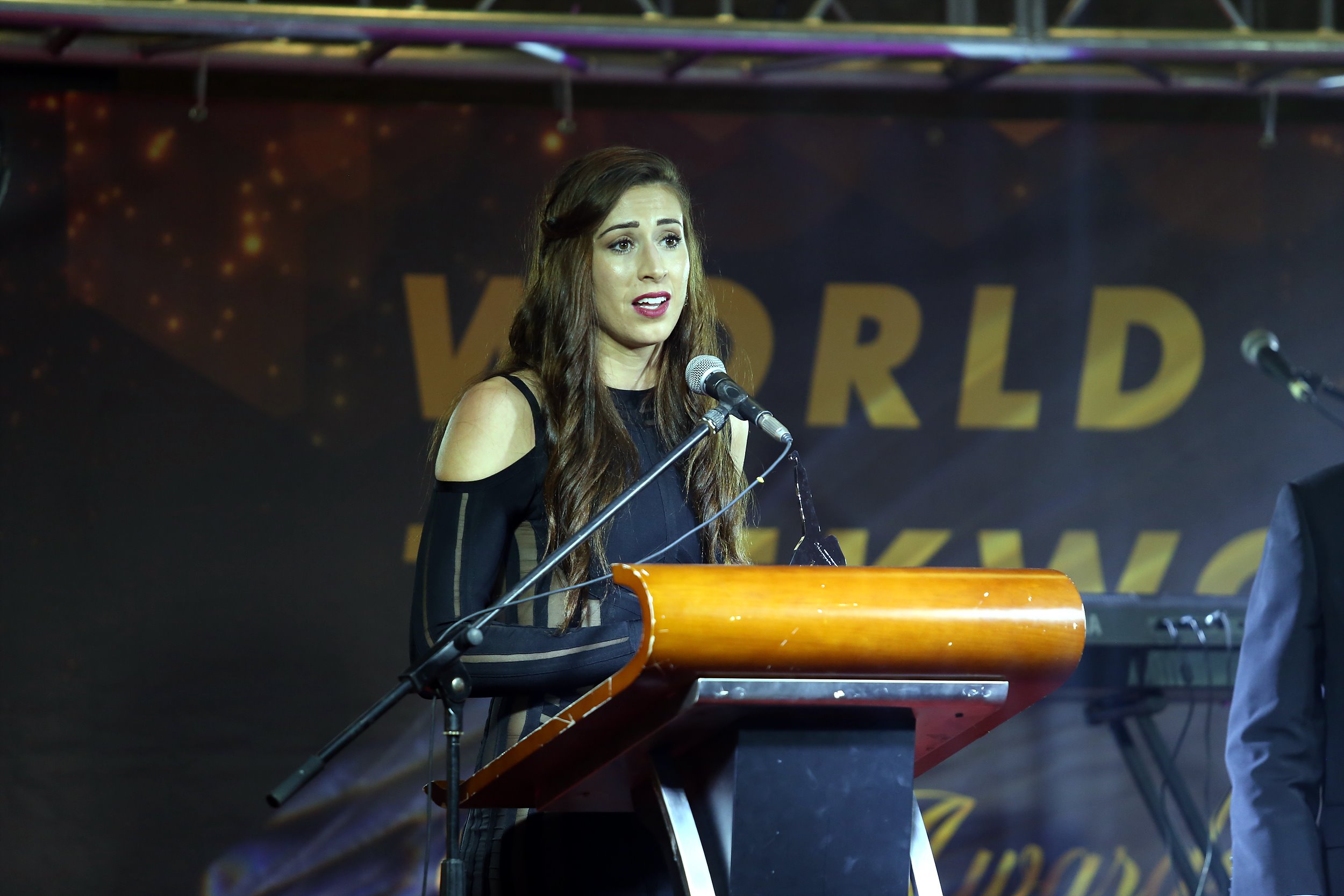 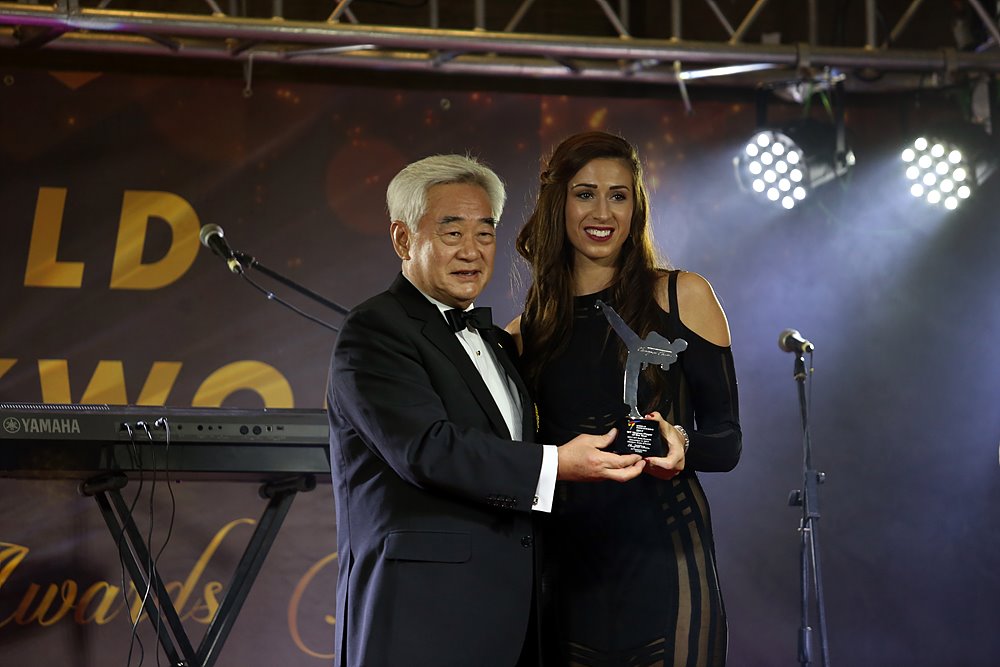 In 2017, Walkden defended her World Championship title and won all four of the year’s Grand Prix tournaments – a historic achievement, as this is the first time this has happened, ever. “I want to ‘thank you’ to everyone, I am still shocked, I am so pleased,” she said on the podium. She added: “I’ve got one more left: I am going to win the Grand Slam – then I am going to take a break!:” Her reference was to the upcoming Grand Slam Champions Series, a new, made-for-TV competition format set to make its debut in Wuxi, China, at year’s end. 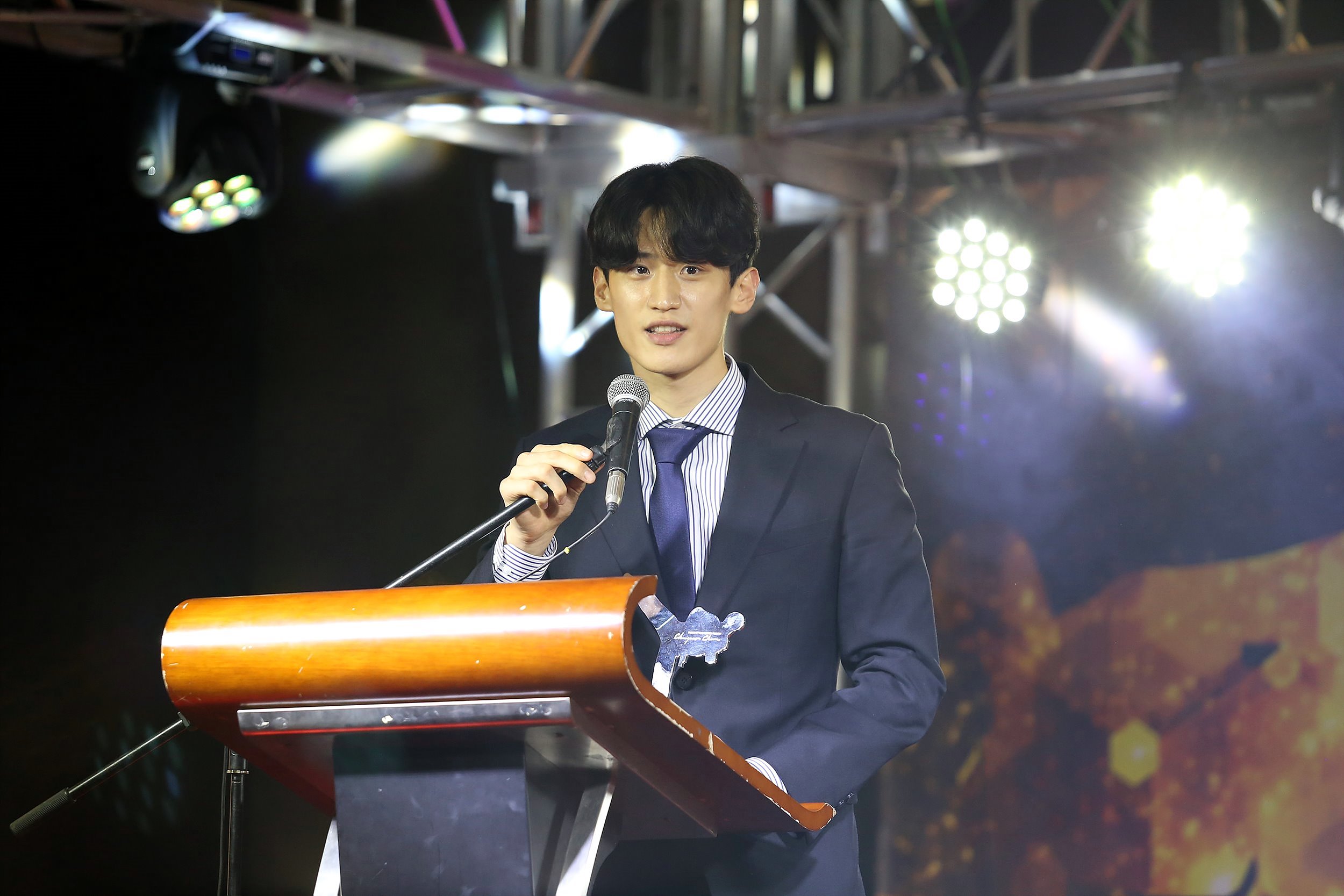 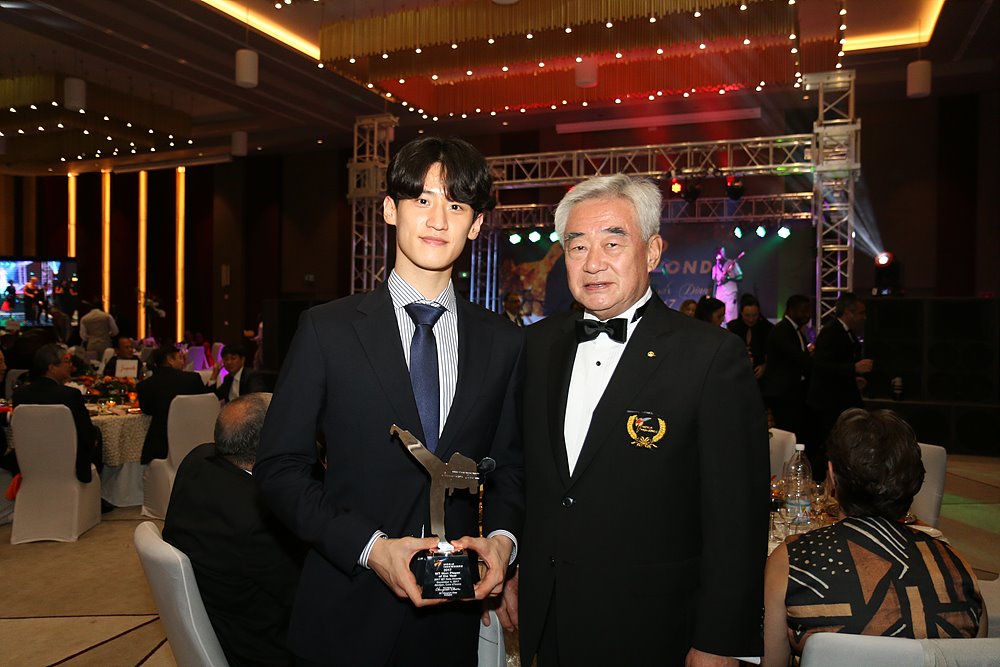 Lee’s receipt of the Best Male Athlete of the Year award was an extraordinary achievement: The soft-spoken, hard-kicking Korean has won the honor three out of the four times it has been awarded in total; no other athlete has won it more than once. In 2017, Lee won the World Championships, and three out of four Grand Prix titles – the only one he did not win, he did not attend. Clearly struggling with his English, Lee persevered to say, “I have always thought that there is something for me to learn from watching the people here; I have learned many things from watching you guys.” 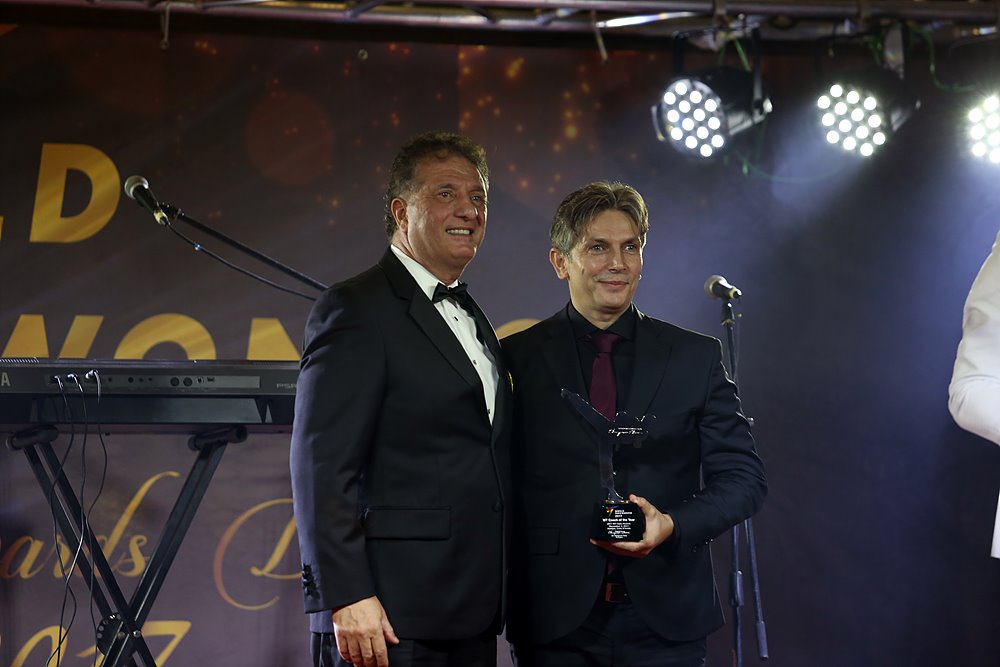 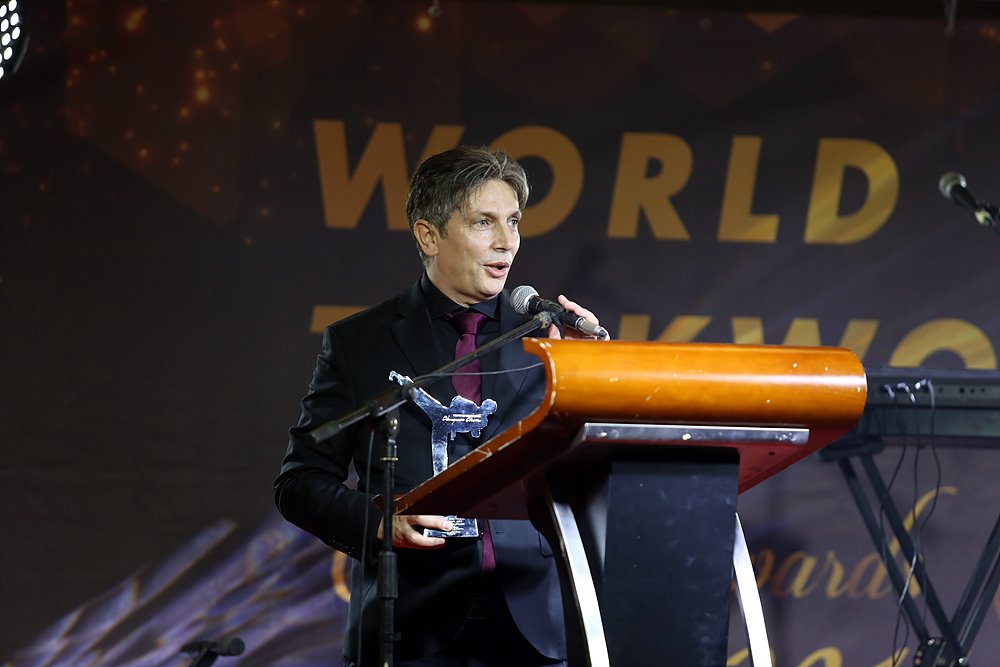 The Coach of the Year award was won by Serbia’s Dragan Jovic, whose remarkable “Galeb” (“Seagull”) dojang in Belgrade has produced a wining crop of female players including two Olympic medalists and two world champions. “I am very happy, of course, but I could not have done it without my ladies!” he said, before wishing all a merry Christmas.

The Best Kick of the Year award was won – for the second time – by Moldovan Aaron Cook, for his spinning heel kick to the head of Russia’s Anton Kotkov at the Moscow Grand Prix Series 1. “I don’t know what to say, I am just here to support Bianca,” he said’ Cook and Walkden have been romantically linked for a decade. “It is a great honor to get this award a second time.”

Best Member National Association of the Year was won by Korea, which had successfully hosted the biggest world championships in history.

World Taekwondo Africa was named Best Continental Union of the Year. Africa enjoyed its greatest-ever outing at the Rio Olympics in 2016, and this year, has hosted a Grand Prix (in Rabat, Morocco) and a Grand Prix Final (in Abidjan, Cote d’Ivoire) in 2017 – both firsts for the continent. 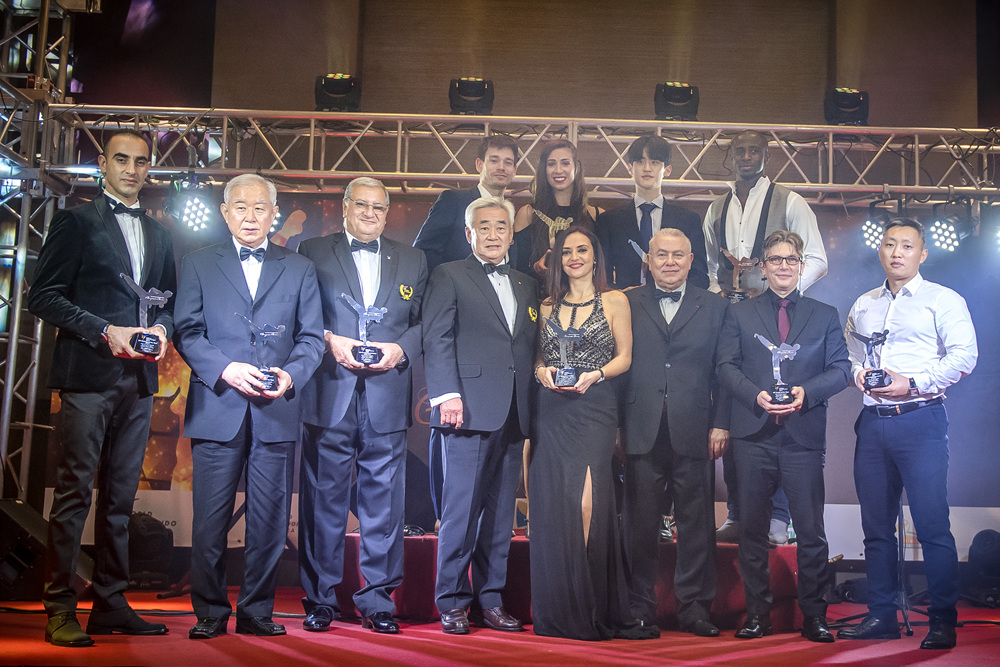 Best National Team of the Year – is the team which has taken home the most medals in the World Championships and Grand Prix Series of 2017 – was won by Korea, followed by Russia in second place and Great Britain in third.

Earlier in the evening, following a performance by a local dance troupe, WT President Chungwon Choue had recounted the achievements of the year, focusing on the success of the 2017 World Championships in Muju, Korea; the rising role of Africa in the sport; and the charitable efforts of the Taekwondo Humanitarian Foundation.

The President of the Cote d’Ivorian Taekwondo Federation, Daniel Cheick Bamba, also spoke, thanking WT for giving his nation the chance to host the prestigious Grand Prix Final, Gala Awards and World Team Championships. “To see you all here at this ceremony, my heart is full of happiness,” he told the crowd.

The ceremony was MCed by Pascal Gentil, the chair of the WT Athletes Committee.

At the conclusion of the ceremony, the evening really got underway as a range of singers took to the stage, dinner was served, and the wine flowed.