MUJU, Korea (June 30, 2017) - Few fighters deserve a World Championship title as much as Nur Tatar. The Turkish international is not just one of the most familiar faces on the circuit, she is also one of the most consistent finalists. However the four-time European champion had never won a world title – until Muju 2017.

“I could not believe it, and I still can’t believe it!” she said the day following. “This is my fifth time at the World Championships. Finally, I got it!”

After her 6-4 victory over Team USA’s Paige “McFierce” McPherson in the F -67kg category at Taekwondowon, she had to deal with a few calls. The first was to her fiancée, Iranian international Mehran Askari. “I called him directly and he was with my family and he was crying – my mum, my dad my brother, all were crying,” she said. 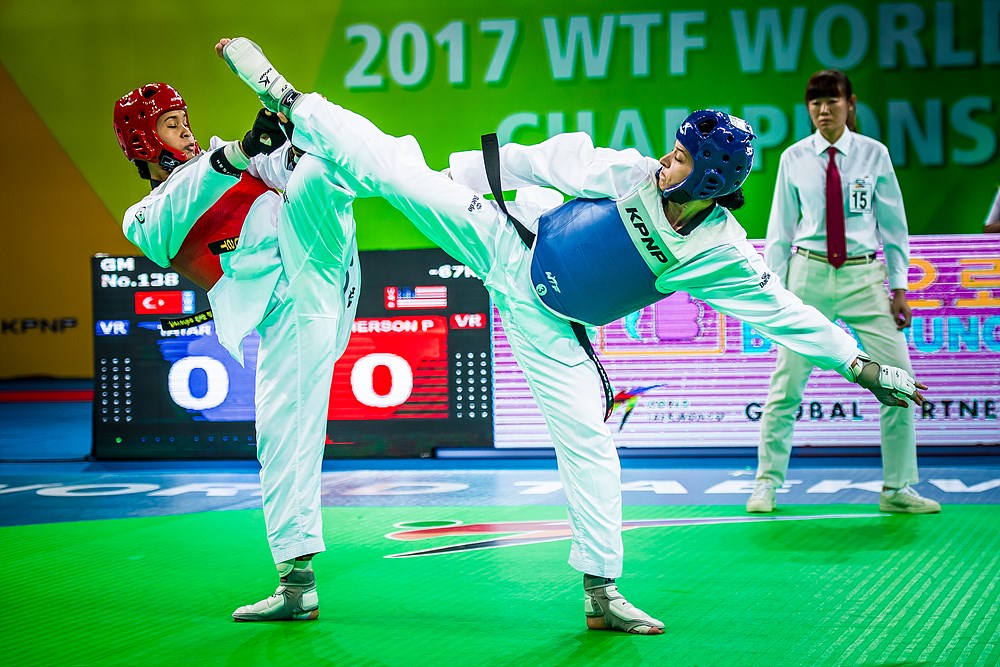 Then she had to answer a call from a sports fan named Recep Erdoğan – better known internationally as the president of Turkey. “He said ‘Congratulations!’ he said he was proud that I had brought the gold to our country, and he believes all will go well and I will keep the same position in 2020,” she said.

How did the president know her mobile number? “If they are big they can find you – they can do anything!” she laughed. In fact, the two are acquainted: The Turkish president will be a guest at Tatar’s wedding this August. “He looks on me as a daughter,” she said.

That August wedding comes courtesy of taekwondo - and Korea. Tatar and Askari met at the Universiade in Gwangju in 2015 – where they both won bronzes - and started dating at the World Grand-Prix Final in Baku in December 2016. The Turk is grateful to the home of taekwondo for gifting her with both a World Champions title and a husband. “Korea is my lucky country!” she said.

Where will the Iranian-Turkish couple reside, post-wedding? “We will live in Turkey!” she said. “We women always win!” she added, thumping the table to reinforce her point. Questioned about her punch – she wielded it to great effect during her semi and final fights in Muju - she admitted, “I learned that punch from my husband-to-be. We train together, and he showed me.” She added mischievously, “We fight when we are training but we have no fighting in the home: When we come home, we have no power! We are tired!”

Now a third dan university student studying PT, the 25-year-old from Van in Turkey started young. “I was really just following my brother,” she said. “That was how I started taekwondo at five.”

Tall and lithe, with dark, dangerous eyes and her mission statement – the Olympic rings - tattooed upon her shoulder, Tatar looks the archetype of the Turkish woman warrior.  However, she admits that she finds premier-league taekwondo a high-stress business.  “I throw up before a fight - then I feel comfortable,” she said. “I was sick three times on the day, and I can’t eat or drink on competition day.” (Indeed: During this interview the day after her win, Tatar was upbeat, but still feeling queasy.) 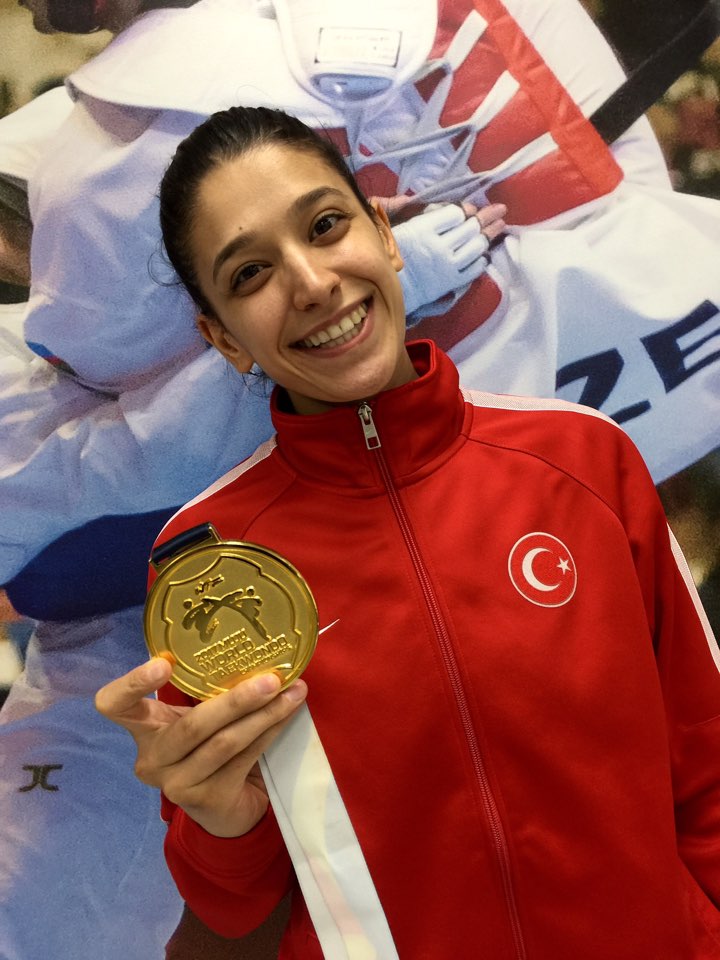 Despite her jitters, she had a good feeling prior to Muju. “The first day I was feeling weak and not energetic, but I believe in myself,” she said. “I knew I was going to get the gold - I felt it!”

She does not have an official nickname, but one has been suggested by her colleagues. “The line is ‘Like a lioness,’” she laughed. (“A Turkish lioness!” her coach added.) It is fitting. Asked to describe herself she said, “I am powerful and strong: When I am feeling good, feeling the concentration, I believe nobody can beat me.” Her favorite technique is taekwondo’s most powerful blow, the back kick; she is also a wicked puncher.

While the main point of conversation in Muju was the new rules, Tatar is not that interested in joining the discussion. “It does not matter, I do not think like that,” she said. “In my mind, if you are fighting, if you are strong, you can win. You can do it!”

Despite her winning ways, despite the high-profile patronage of the president, and despite the huge national taekwondo league in Turkey, Tatar is not impressed with the level of media and sponsor attention taekwondo gets. “I am not happy: The media side is not too interested and the sponsor side is not that interested,” she lamented. “There are a lot of registered athletes in Turkey, but not much [commercial] value.”

Currently a student of physical education at university, her plans in taekwondo extend beyond competition. “Now, I am thinking I will retire, but Mehran is a PT trainer and he will continue to fight,” she said. “When we finish our careers we will do international training, as coaches.”

In that ambition, she will be assisted by the fact that she is a World Champion – a title that enters her name in the taekwondo history books. “Of course I got the medal for my country and I got it for myself and I got it for my husband,” she said. “It is good for us. What we can do with it, I do not know - whatever!”

Nur Tatar at a Glance